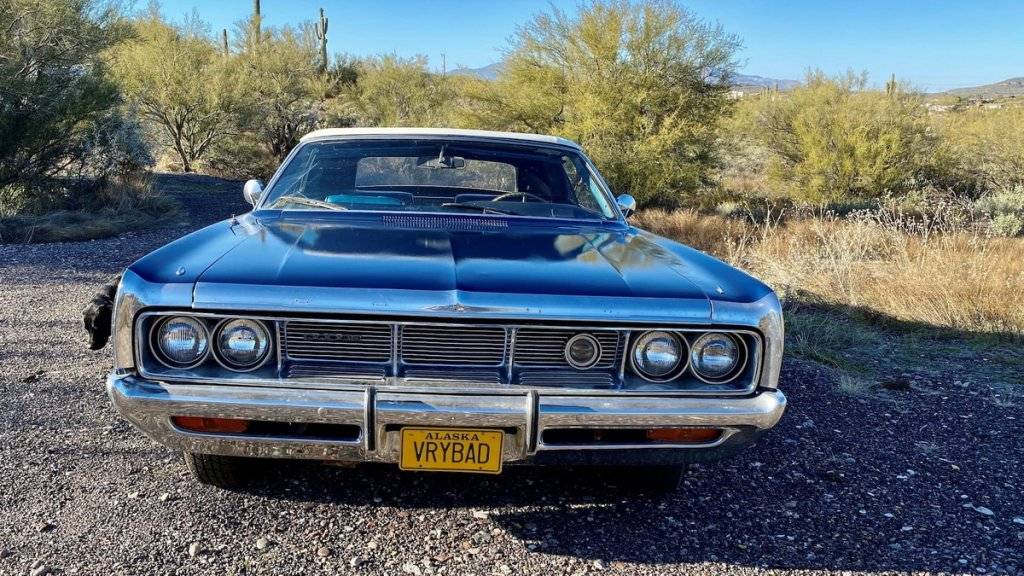 Some like it some don't, I'm trying to find out some things about this package.

It is commonly referred to as the "Spring Special" trim.
When was it available?
Those with it what is your scheduled build date?

Access holes in the hood (six 1" holes near front edge), I do not feel the early cars have these holes, I assume all hoods after a certain date had the holes. 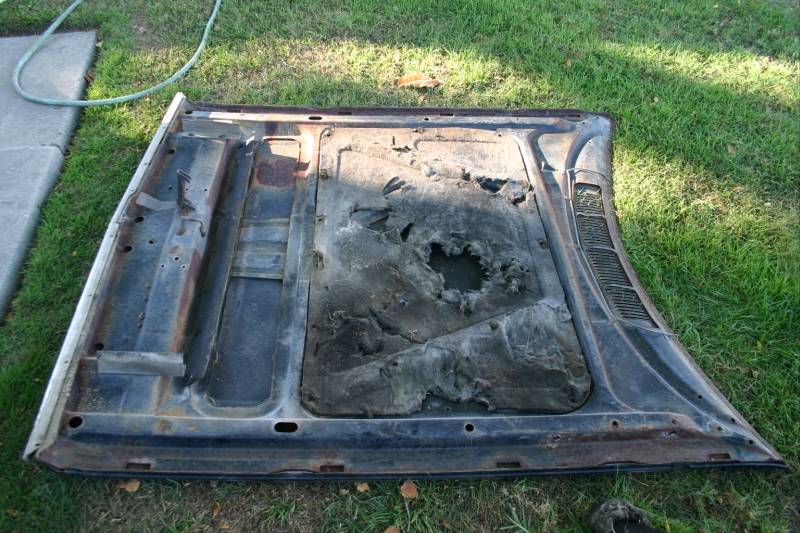 When did they start?
Did they have all 6? (I have seen with only one of the middle ones)

All the option codes in DM27L9D200582's fender tag are accounted for, from which one can infer that the SS package was not coded in the data tag. 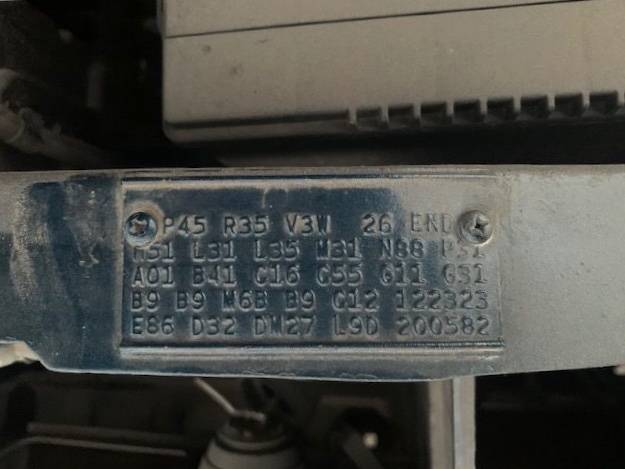 You have posted your Polara 500's build sheet in this thread, but the photo is fuzzy -- making it hard to decipher most of the codes. I don't know the SS code offhand, but there are several candidate A__ option package codes here (list courtesy of @Dobalovr )
Last edited: Feb 22, 2022

ayilar said:
All the option codes in DM27L9D200582's fender tag are accounted for, from which one can infer that the SS package was not coded in the data tag.

You have posted your Polara 500's build sheet in this thread, but the photo is fuzzy -- making it hard to decipher most of the codes. I don't know the SS code offhand, but there are several candidate A__ option package codes here (list courtesy of @Dobalovr )

I have decoded all the codes on the Data tag and Broadcast sheet, there are no unaccounted for codes, all trim codes are clearly not it.
The broadcast sheet is too faint to get a good scan. It is clear enough to know I didn't miss one or miss read one.

This thread is started in the idea that I do not feel it is original to my car although well installed.
A. The December 12 build
B. The absence of the 6th hole on the bottom of the hood (the trim only has five studs).

I would not be so sure it is not original. Look at this thread: NOT MINE - NOT MINE 69 Dodge Polara EBay

AFAIK, the extra brightwork on the nose was advertised in the spring (which is after either of the two cars we've discussed so far in this thread was built), but the text of that ad is written in such a way that the exact introduction date is not spelled out:

AFAIK, the A48 DressUp Group is not the code -- here is what it is, courtesy of the Hamtramck Registry: 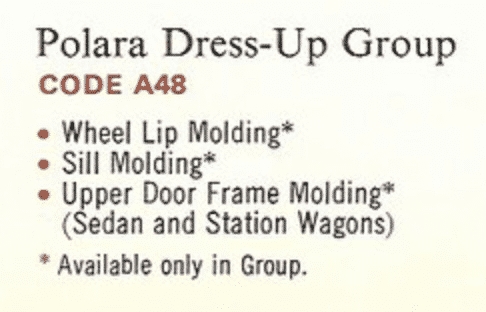 If you want an example of a late-build car that has the A48 code but not the front-end chrome, see here:

I am listing this car for a friend that is not computer literate. It is a 1969 Polara that is an original paint survivor with only a little over 33K miles. This car has been sitting a LONG time but was stored inside so the interior is nice with perfect dash pad, seats and door panels. There is...
www.forcbodiesonly.com

The Spring Special items were designed to bring customers into the showrooms after the "winter season". As with other marketing packages, it was a special grouping of equipment and colors not otherwise available, at a discounted price . . . as I recall. Such announcements would have been via Letter to the Dealer, with ordering instructions, I suspect. For them to appear in the spring selling season, I suspect the letters would have been sent sometime in December. Perhaps there might be something of this nature, although not specifically for 1969 Dodges, in the "Dealer Letters" section of the Library at www.hamtramck-historical.com ?

This page was found on the Hamtramck Historical, dated April 25 makes reference to "Something Special" for Spring campaign.
With this package you would have got the woodgrain dash overlay (easily omitted years later) and Tire code U31 or U32

So could this trim had been part of another package? 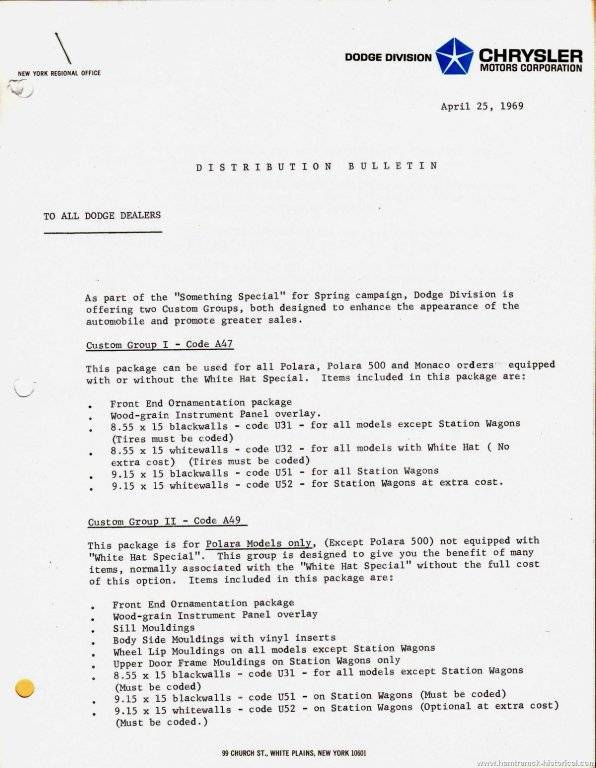 I repeat my suggestion to look at the April 2008 Collectible Automobile magazine article that focused on the fuselage (1971-73) senior Dodges. I don't have access to my copy right now, as I am halfway across the country from it, but I have a recollection of the author's mentioning the changes that were made to the Dodge. Whether there was a mention of both the front end in 1969 or only of the wider rear track and other restyles in 1970, I do not remember. But if the front end dress-up chrome was mentioned, there should be a useful mention of dates.

Regardless, I looked up in my lunch break the tags I have for the 1969 Polara 500 'verts of which I am aware that post-date the April 25, 1969 letter you scanned above. Here is what I found:

Note that DM27G9D231216 must have been built in Feb. or March 1969, and it has the chrome surround. @rcsfca owns that car and has the build sheet, so you may want to check with him.

Keep in mind this is not just a convertible thing or a 500, although the letter doesn't mention the Monaco they might be included.

It is highly likely that cars had the trim added over the years, even day 2.

MrMoparCHP said:
Keep in mind this is not just a convertible thing or a 500
Click to expand...

I know. But the only ‘69s in my little registry are the ‘verts.

Dealers may have taken unsold stock and dressed them up regardless of how the car was tagged. Wasn't this a Dealer Promo car? It might have been on the lot long enough that come spring it got the treatment to take advantage of the sale.
F

This “package” was released by Dodge and Plymouth to help increase sales and also more to the point, it was to compensate for the unfinished design on the Plymouth and Dodge divisions full size vehicles. Essentially, the 70 style front end should have been released in 1969 but both divisions were not able to complete it before production began.

The “loop” or “hoop” concept of the front end design was division wide and mostly model wide, but couldn’t be implemented on target 1969. Hence, the “Spring Special “ front end trim package, to help make the car look more like the 1970 design target.

Dealers were encouraged to offer the upgrade at cost or at no cost to customers, so many cars had the “Spring Special” package added by the dealer.
Last edited: Feb 24, 2022

Some more for the puzzle:

None of the above cars has the A47 code on its fender tag. FWIW, I did find one car in my sales records with the A48 (but not the A47) code that had NO chrome surround:

By the way..both divisions knew they would not be able to finish their respective designs by May 1968, so the “Special” package was considered well before the car was finalized and or production started in August 1968.

I’ve got a complete NOS package in the box for a Plymouth..I’ll look on factory label for a code or anything else that may help..
F

do you know of any clay models (pics) with the originally planned 69 look for the Dodge&Plymouth, Trev?

fc7_plumcrazy said:
do you know of any clay models (pics) with the originally planned 69 look for the Dodge&Plymouth, Trev?

If memory serves, and at the risk of sounding like a broken disc, CA usually has pics of the early sketches and clays. I see no reason why Jeff Godshall's article in April 2008 should not have some.

I had a friend look at my old CHP car, the hood on it was from a parts car (8/28/68 SBD), it does not have the access holes for the Spring Special trim.
A little early to be much use other that to point out that not all hoods had the holes.

Here is a hood from an early car (12/3/68) and it doesn't have the holes (access on back side) to attach the trim.
I have seen hoods with these holes that clearly never had the trim, they were all later cars. 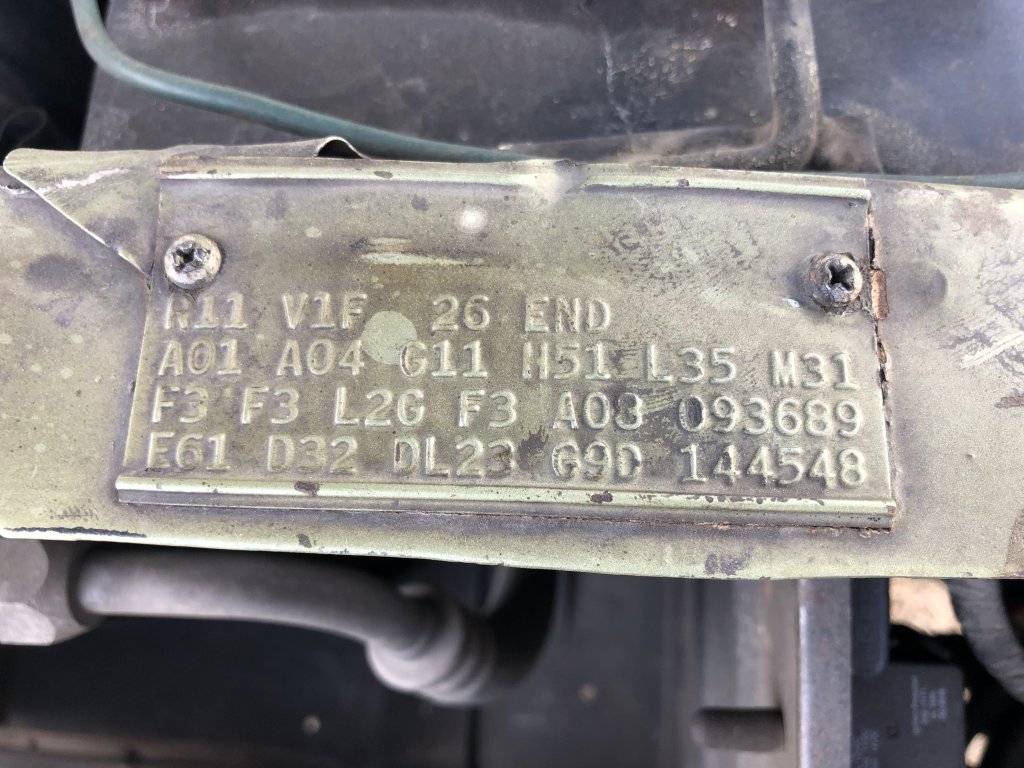 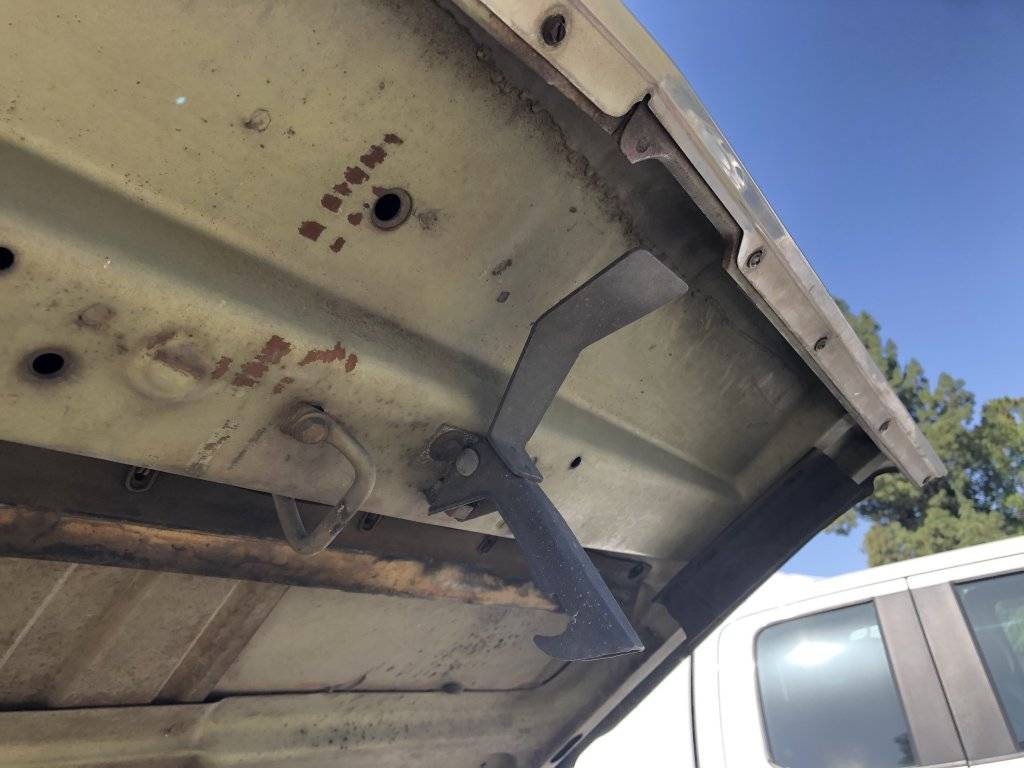 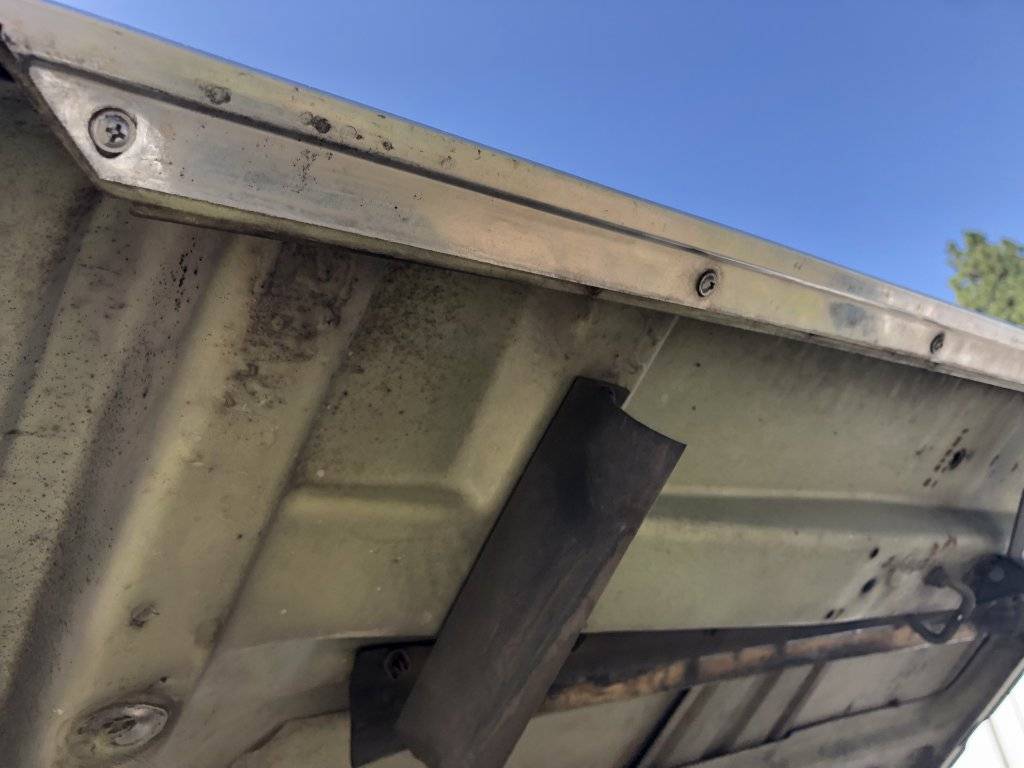 Interesting. Do you have more info about DL23G9D144548 ?
You must log in or register to reply here.