At the time of posting, this FB listing is 1 week old.

FB Description (Translated from German)
* ONE TIME NEW YORKER WITH LOTS OF POWER & COOL PREHISTORY - MATCHING NUMBER & WITH VETERAN MFK!** This beautiful Chrysler New Yorker 4 dr Hardtop was registered as a new car in Switzerland for the SWISSAIR in 1970 Until 1985, the luxury sedan served as a VIP taxi for the airline and thus chauffered the most prestigious, national and international personalities of the time. The badge in the glove box with the SWISSAIR serial number is still in its place today. After that, the vehicle passed into private ownership and is now in lover s' hand for many years! In recent years, there has been a lot of investment in New York and it has been technically extensively optimized. The original ′′ matching-number ′′ 440 engine was completely rebuilt and expanded to 493 cui (8.0 L) in the same train. The power was thus brought to over 400 HP / 700 Nm. The whole thing was built to maintain its luxurious driving capacity - only with a lot more pressure when you push your right foot to the ground. Also the TF727 automatic and the 8 3/4 ′′ rear axle are ′′ number-matching ", and thanks to the 2.76 translation, the vehicle is also ideally suited for long highway journeys. Steering, chassis, wheels etc have also been optimized and thus enable more direct and safe driving. A double pipe exhaust system from TTI with shorty headers was also installed, with silencers that never get too intrusive despite the full V8 blubber. The beautiful blue interior of the New Yorker is in near mint condition! Both benches were elaborately re-sourced, with the original Chrysler fabric from 1970, which was extra imported from USA. The equipment left little wishes open for the circumstances at the time: air conditioning, 4 x el. Window lifter, 6 x adjustable electric bench, central locking, adjustable steering wheel height & depth, front head restraints, Rim-Blow steering wheel with horn on the steering wheel, and much more - a real VIP sedan! This New Yorker also installed a hidden sound system, including USB port. The New Yorker's bodywork and subfloor are absolutely stainless and the black paint is in very good condition - with a light patina and little signs of wear that give the vehicle charm and character. Under the original hubcaps there are wider steel rims in 8 x15 on 235/70-15 white wall tires. The original wheels in 6 x15 are also available for purchase. In summary, a beautiful, cool and strong New Yorker, with unique CH history from a collector's hand! Technically flawlessly maintained and with veteran MFK up to at least mid-2023! - CH VEHICLE (SCHINZNACHER) WITH A UNIQUE STORY! - EX VIP-TAXI AT SWISSAIR UNTIL 1985 (WITH PACKAGE! )) - 493CUI STROKER MOTOR (MATCHING-NUMBER) - ENGINE FIRST CA. 14'000 KM! - OVER 400 HP & 700 NM! - TF727 AUTOMAT (MATCHING-NUMBER) - 8 3/4 ′′ REAR AXLE WITH 2.76 GEARS (MATCHING NUMBER) - TTI SHORTY HEADERS - 2.5 ′′ TTI DOUBLE PIPE EXHAUSTER - OPTIMIZED STEERING - COMPANY STABILIZERS VO. & HI. - KONI-RED BUMPER VO. & HI. - POWER BRAKES WITH DISK BRAKES IN FRONT - WIDER 8 x15 STEEL RIMS WITH ORIG. CYCLE CAPS - 6 x15 ORIGINAL WHEELS WITH IT - INTERIOR NEW VALUE! - SEAT BENCHES WITH ORIGINAL FABRIC (1970) NEW COVERED! - AIR CONDITIONS - EL. WINDOW COVERS - 6 x EL. ADJUSTABLE SEAT BANK - RIM-BLOW Steering Wheel - TILT / TELESCOPIC steering wheel adjustment - HEADS IN FRONT - AS 7 PLACES IN (4 REARS! )) - HIDDEN SOUND ATTACHMENT WITH USB ATTACHMENT - AND MANY MORE... - TECHNICALLY MAINTENED! - DRIVES AND WORKS LIKE NEW! - VETERAN MFK TO MIND. MID 2023! VEHICLE IS IN CUSTOMER'S ORDER. IF INTERESTED, PLEASE CONTACT DIRECTLY: + 41(see ad) THANK YOU VERY MUCH! 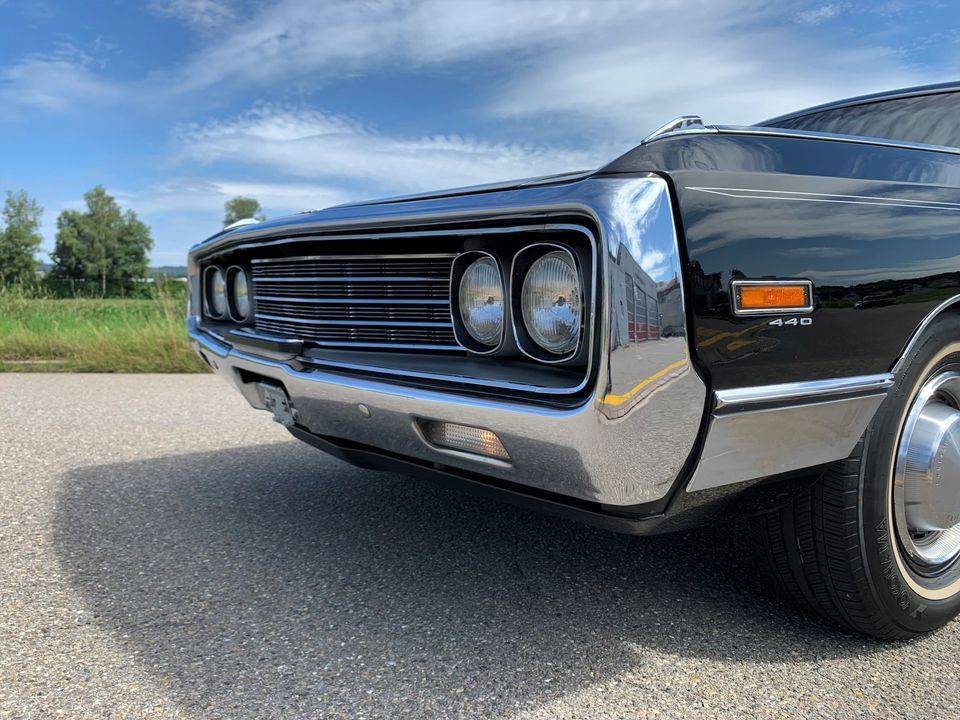 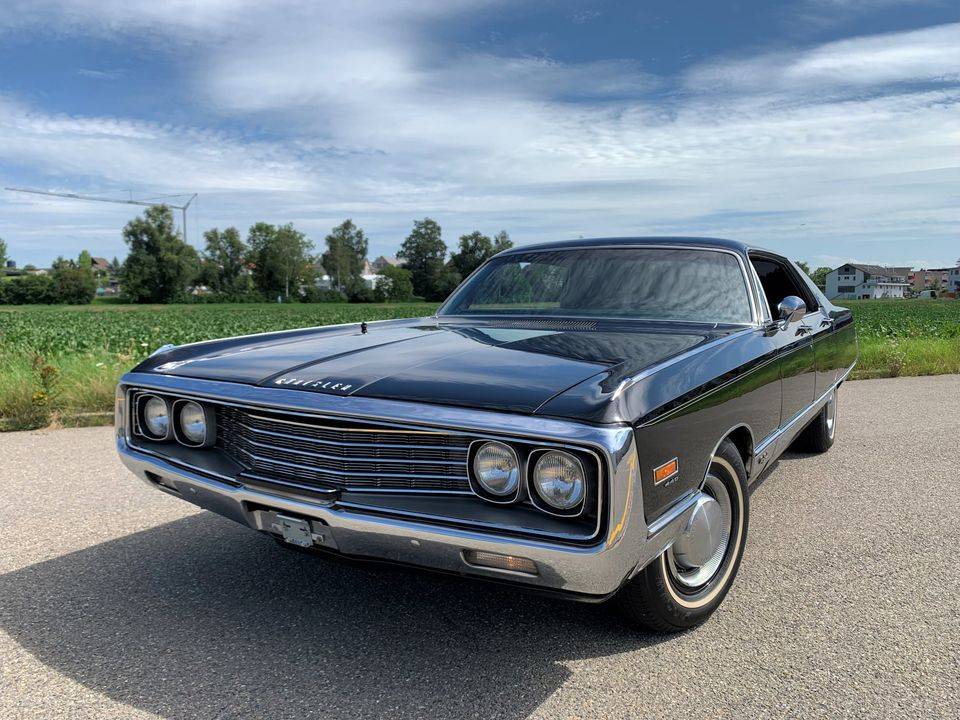 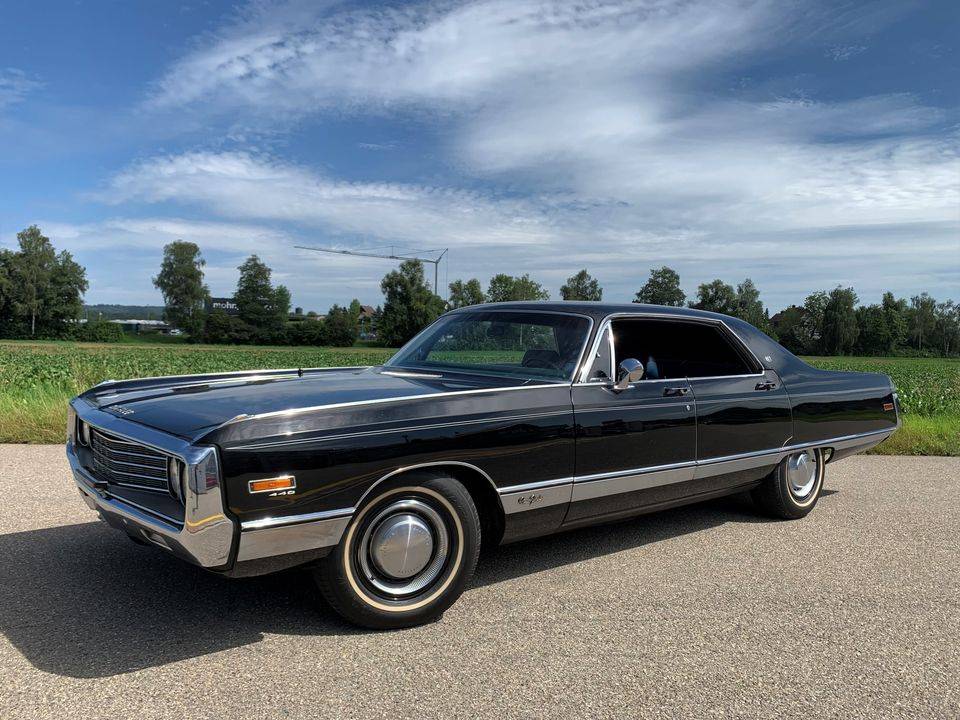 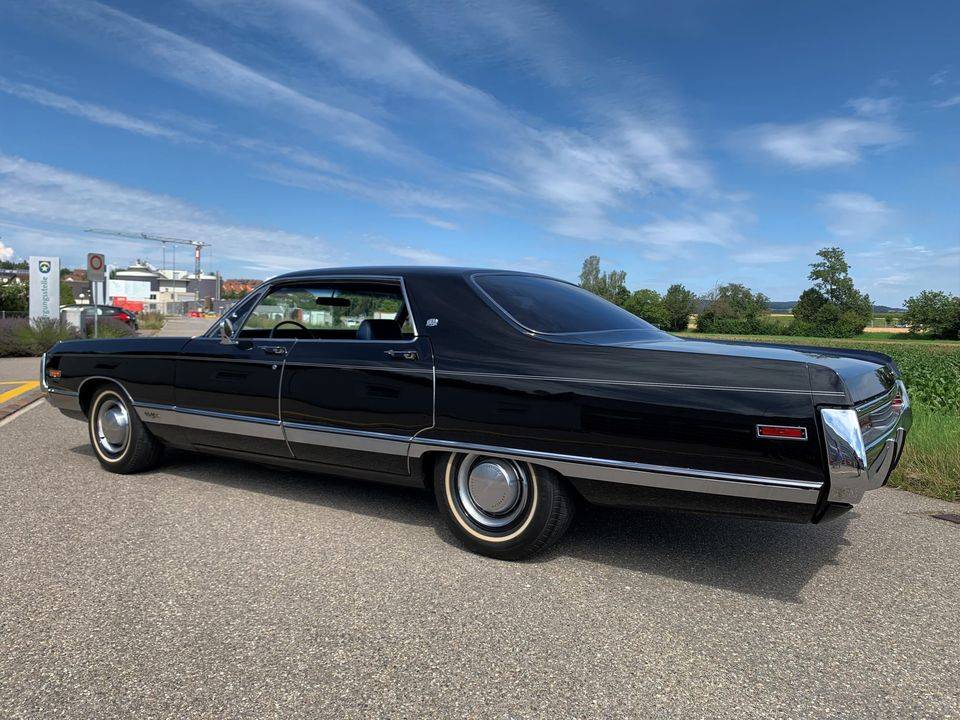 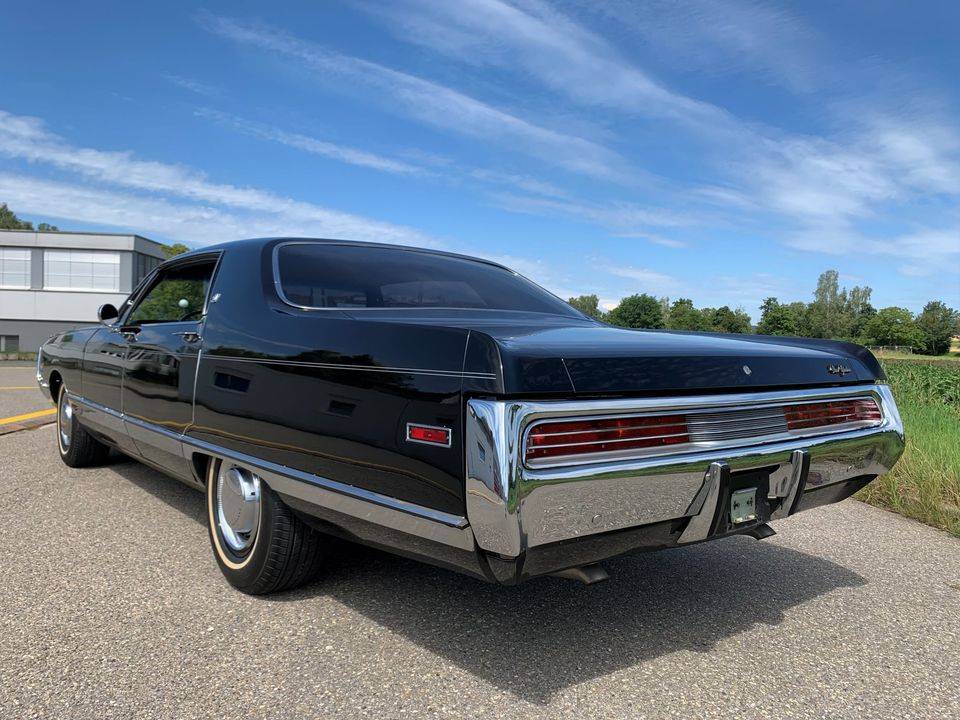 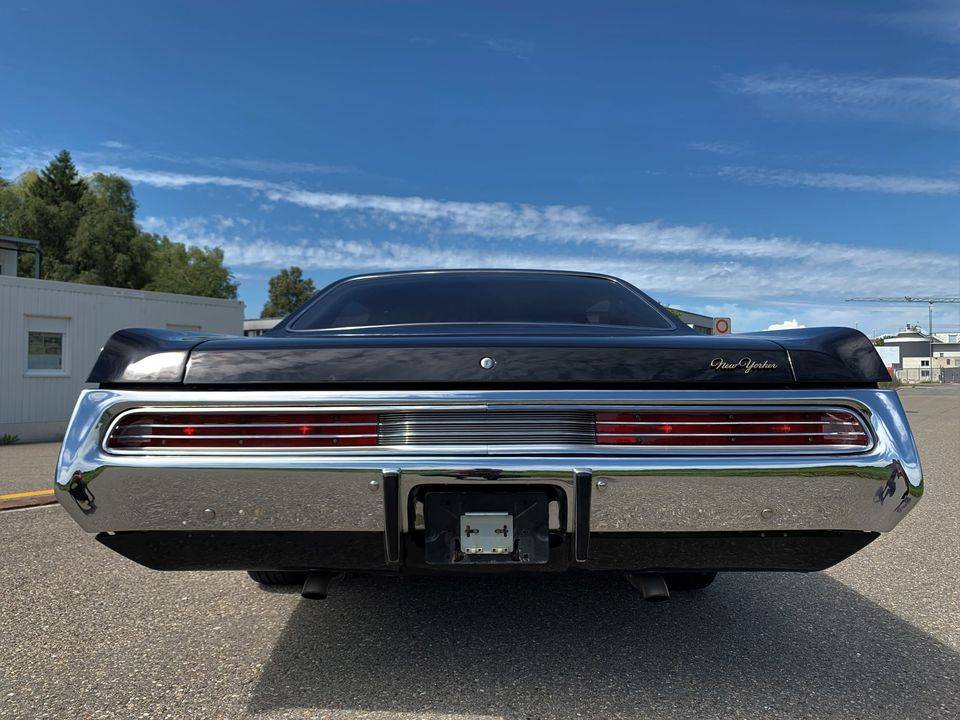 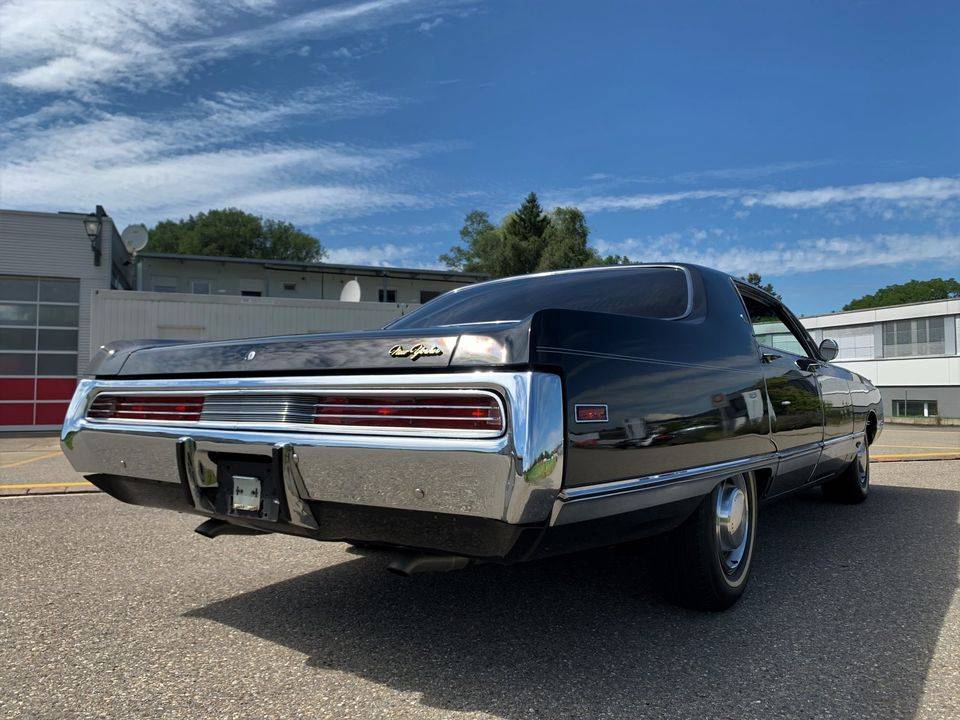 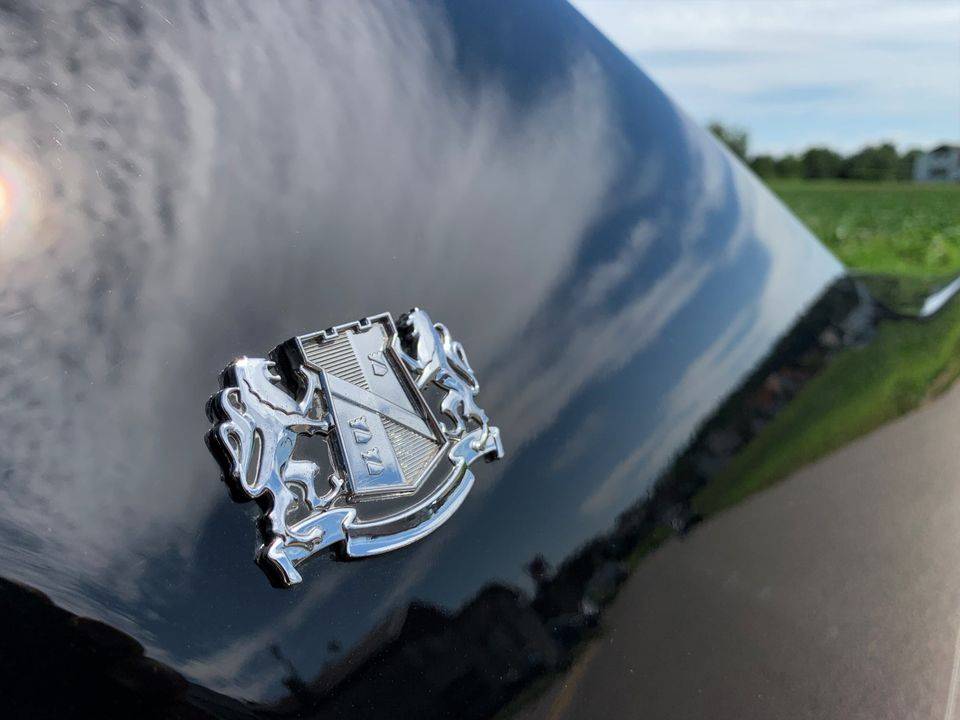 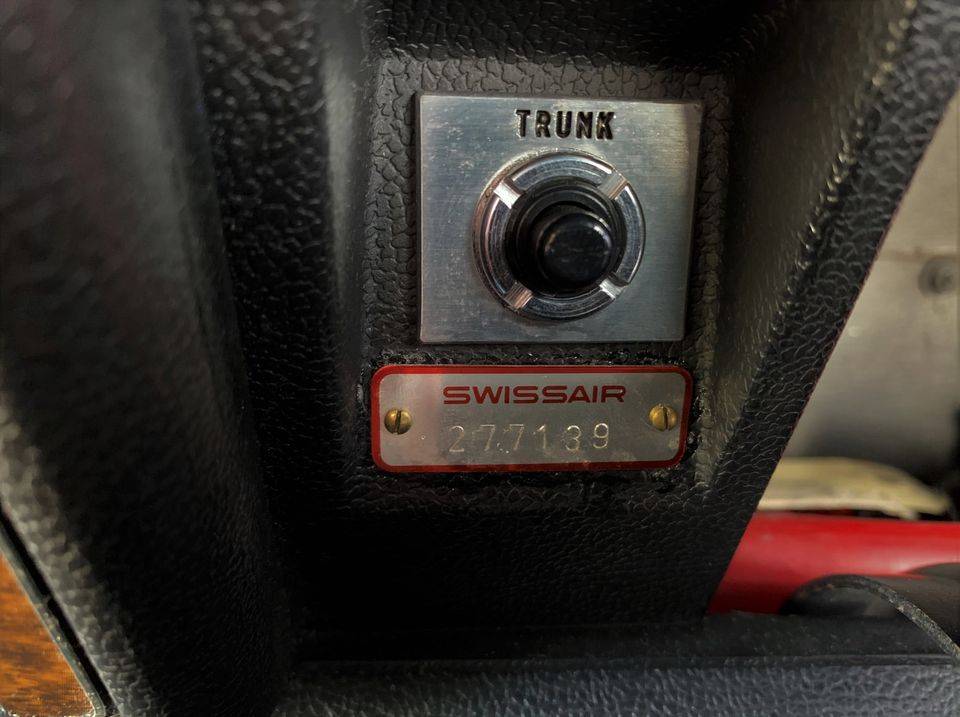 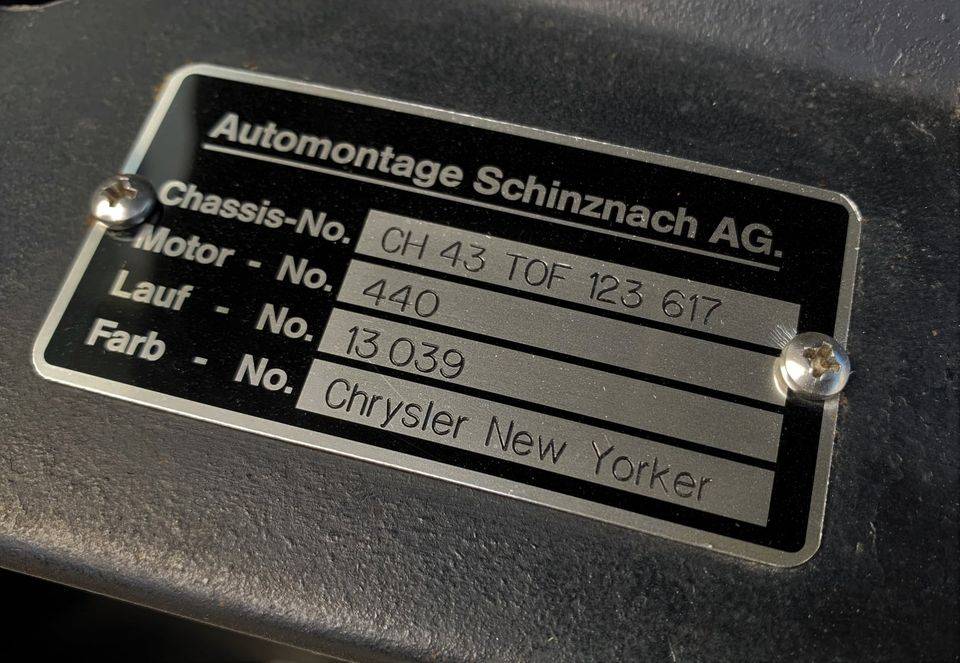 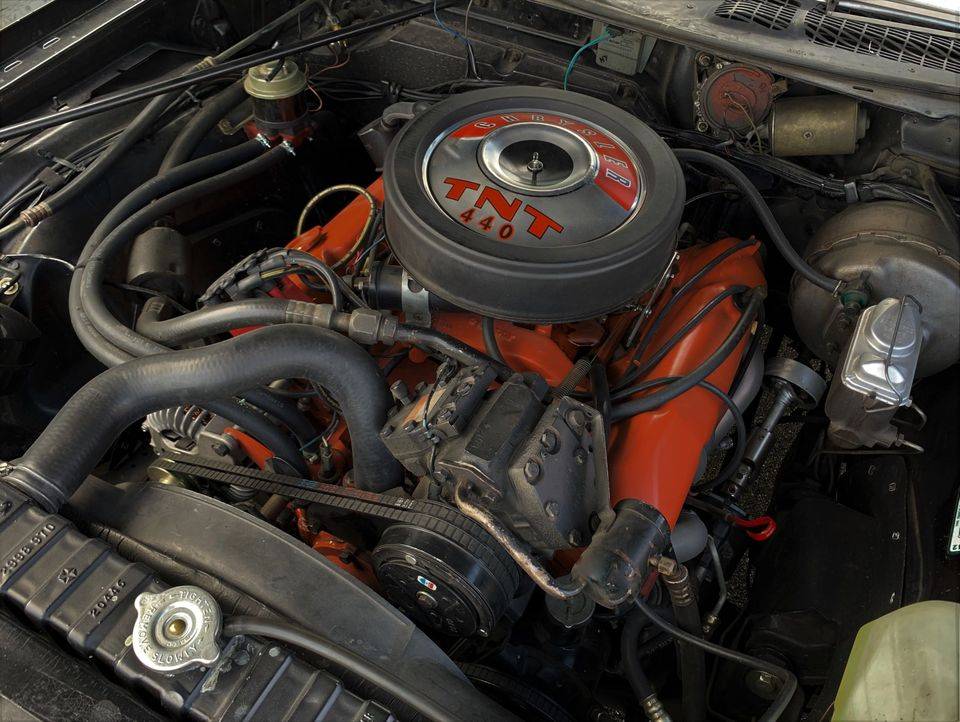 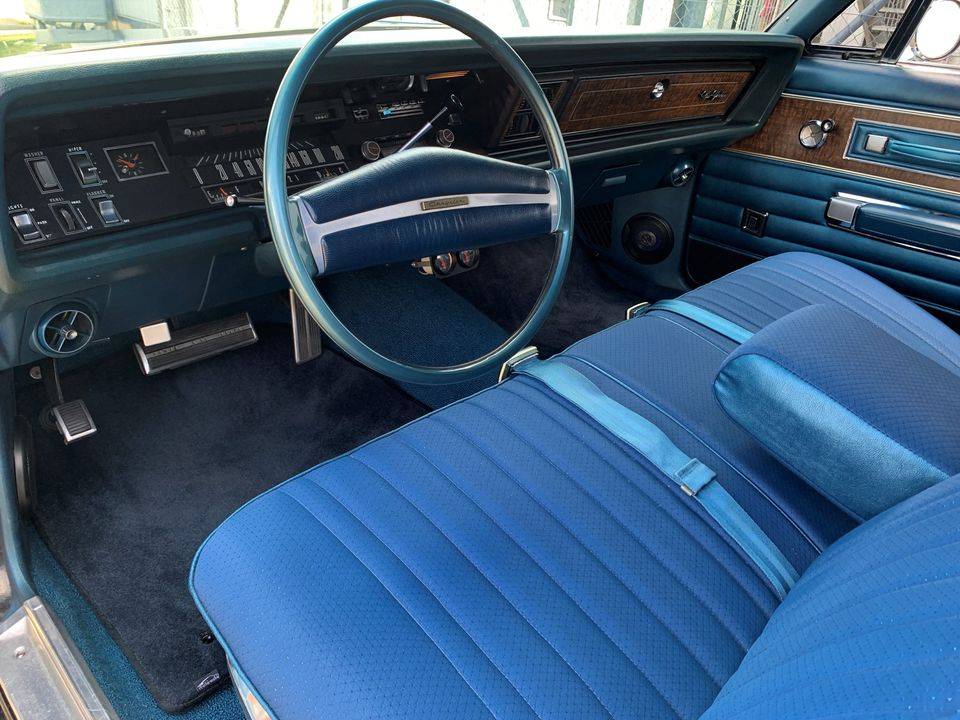 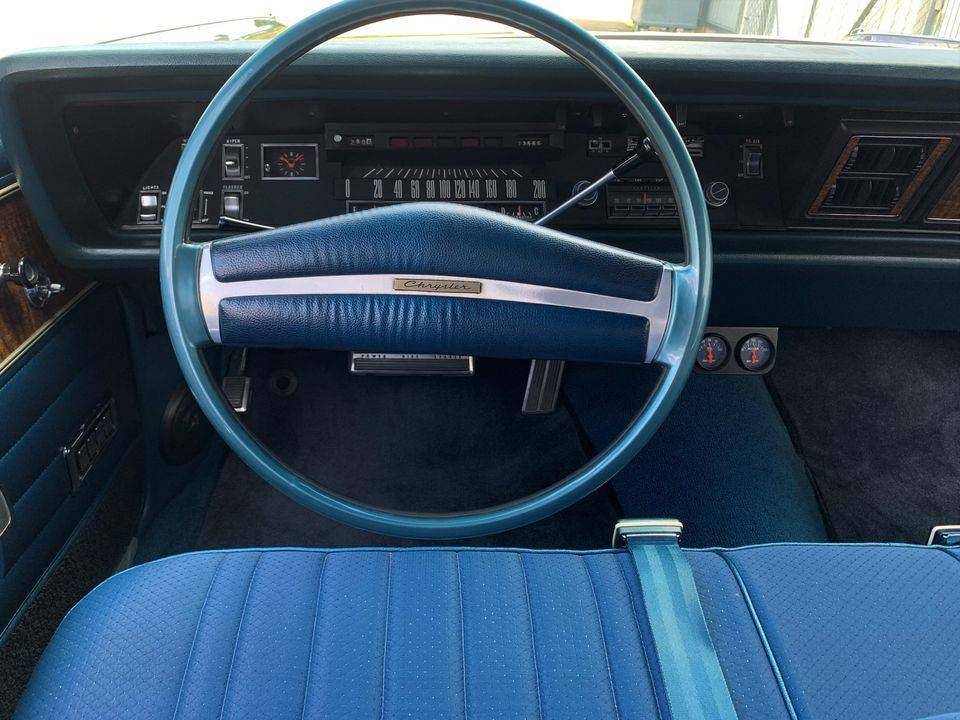 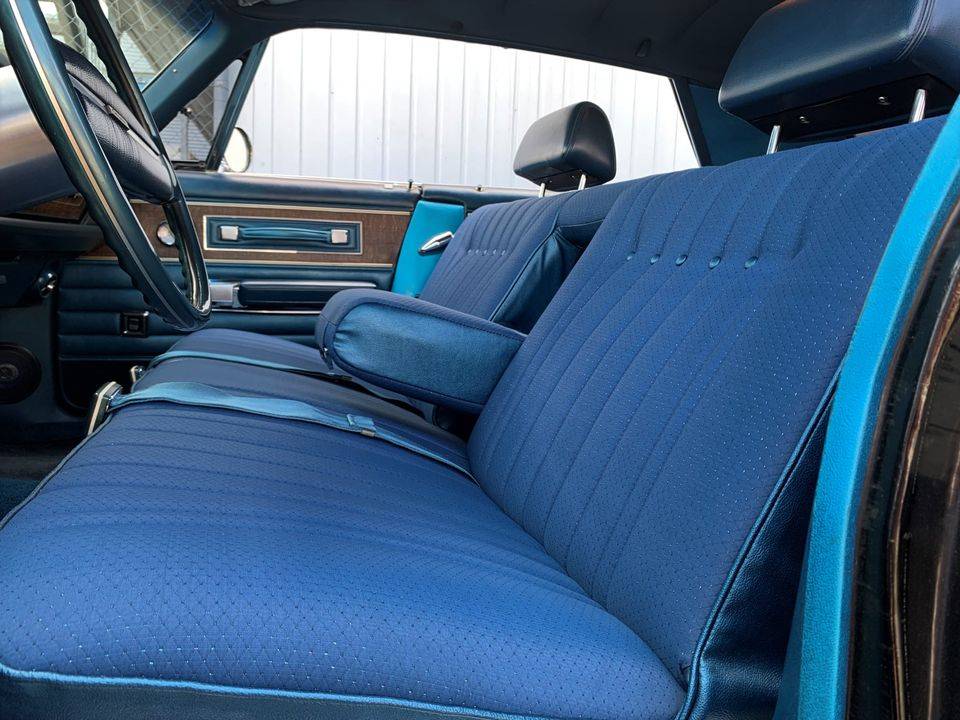 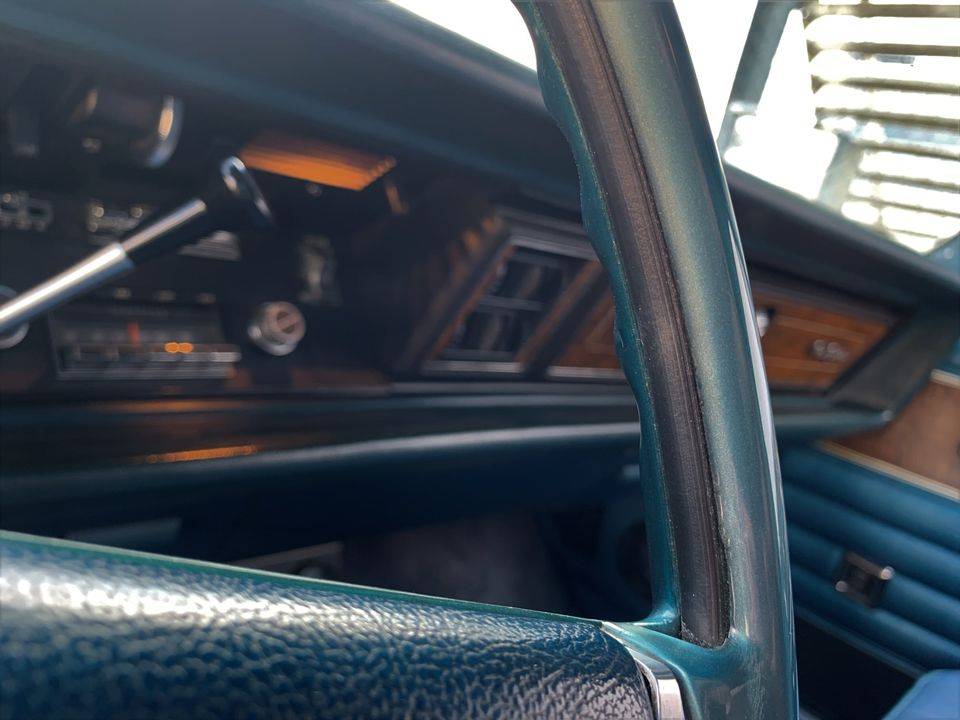 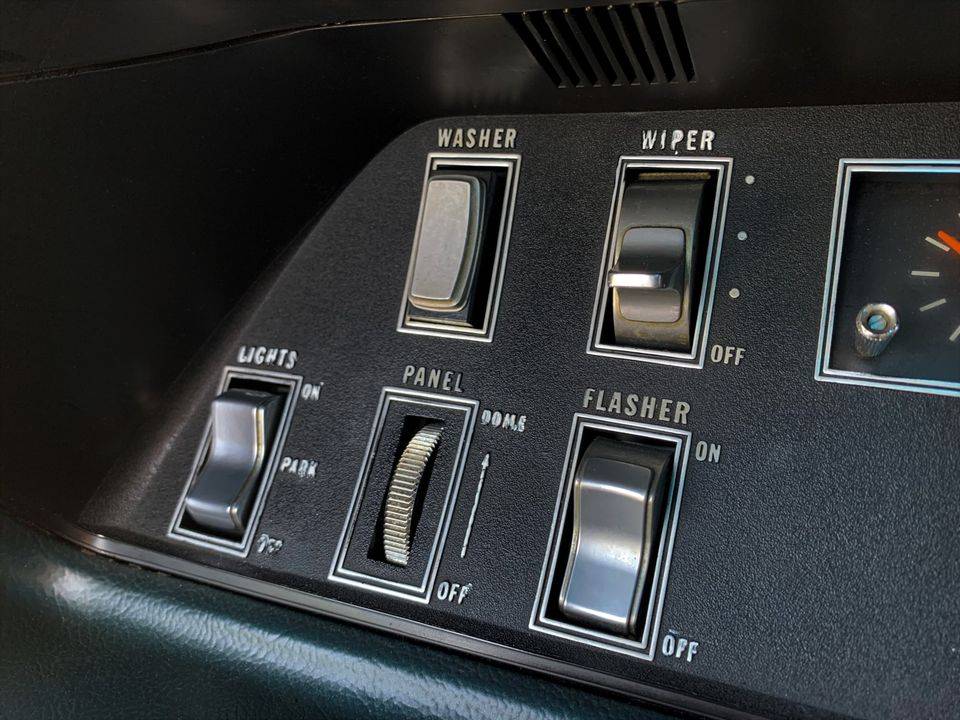 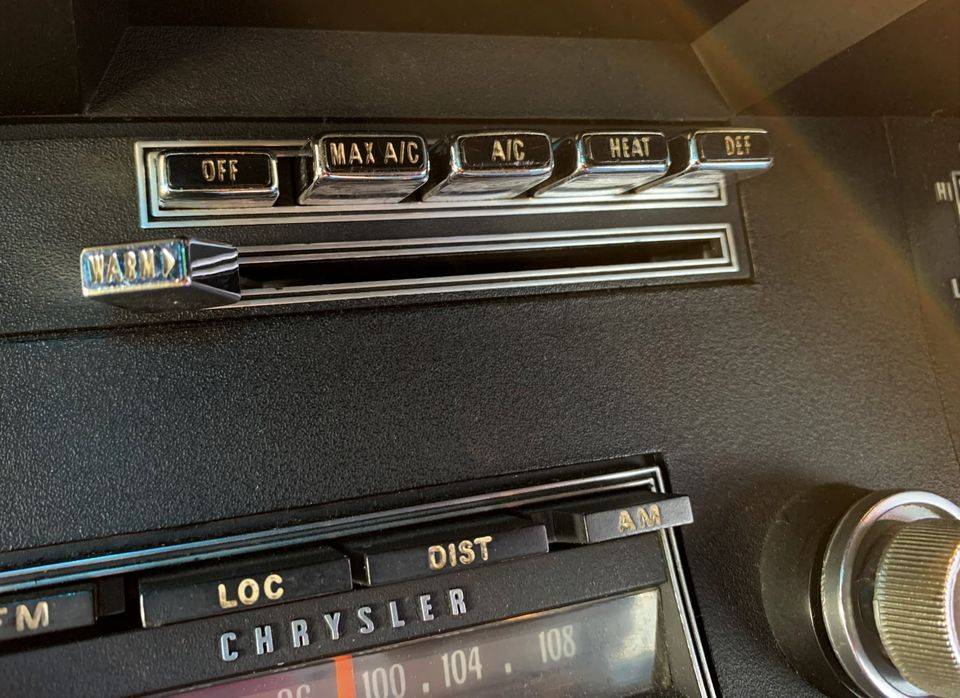 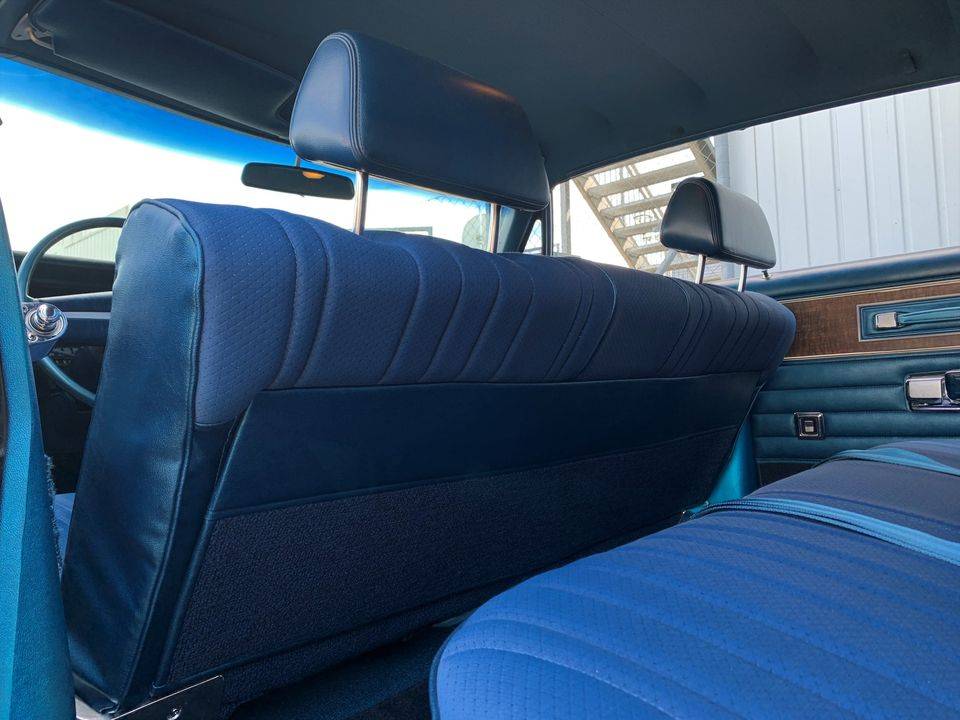 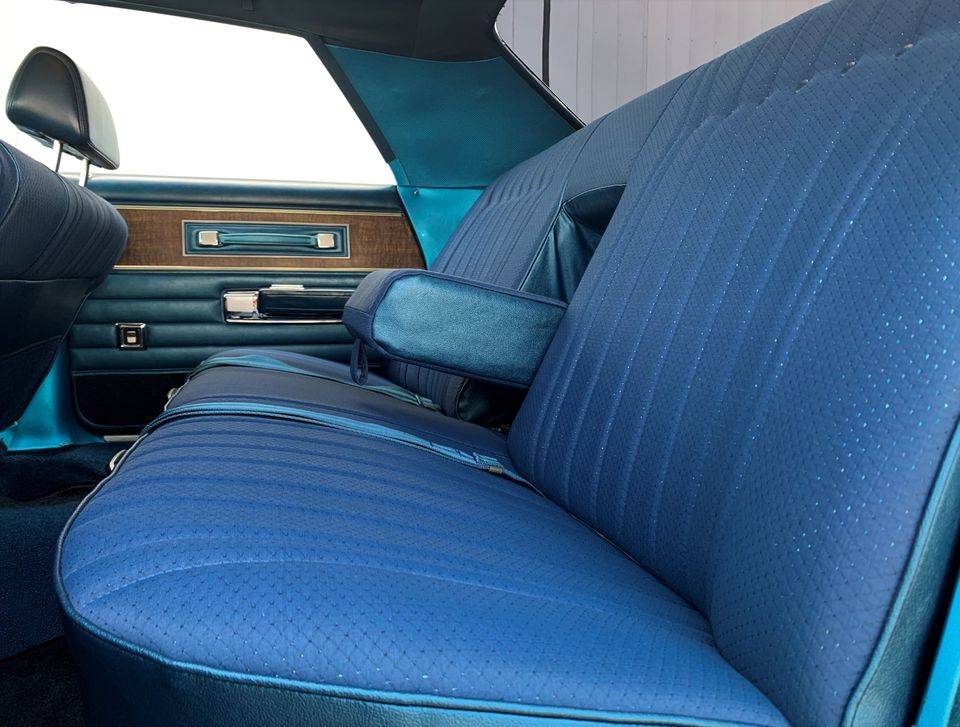 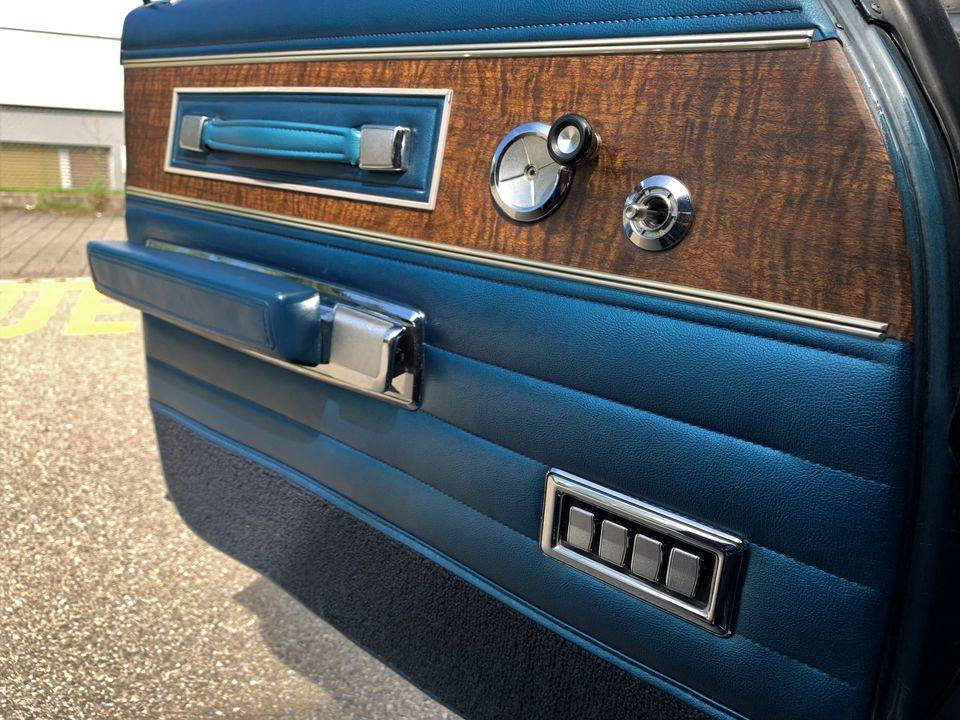 Nice car! Interior very nice...steering wheel looks perfect and "Rimblow" intact. Quite steep on the price $$ though! Someone in Europe will enjot it once the price gets cut in half!

I love it. Beautiful car. KPH speedo, too! And sold already.

I cannot recall what the ”F” stood for in the VIN. As far as I can recall, if it had a special order engine, that would have been ”Z”.

I cannot recall what the ”F” stood for in the VIN. As far as I can recall, if it had a special order engine, that would have been ”Z”.
Click to expand...

The seventh digit is the assembly plant so F would be the Newark plant....I think..
The engine code is T so it's the regular 440..

OK, Thanks. I have never seen such a code on a Fuselage Chrysler. Every one I’ve ever seen has ended in ”C”. So regularly this would have been ”T0C”.
Last edited: Aug 25, 2021

As to the price of this one:
I don’t think it was way out. On the contrary. That is about what one would expect to have to pay for a well optioned, made-for-export specimen in such a nice shape. - Don’t expect for another one to pop up anytime soon.

This one is Swiss-assembled, at the Schinznach-Bad plant of Automontage Schinznach AG (now named AMAG). It received the kits from the US, and then assembled the cars. Perhaps the F means this Swiss plant, or that the kits were shipped from the Newark factory.

That is one stunning car!

I'd like to find one that looks like that here on our continent. Black with blue guts is phenomenal!

I never knew they assembled C-bodies in Switzerland. I wonder why they did that? To avoid high import taxes?
I knew they did assemble the A-bodies both in Belgium, and Switzerland, at some point in the sixties and early seventies. But I always thought all the C-bodies were made in the USA. At least all the Chryslers and Plymouths imported to Finland were so. (Most of the Chryslers imported to Finland back in the day were black four door Sedans with a blue cloth interior. You had to special order one and wait for three months, if you wanted something else.)

I know of at least one Imperial (1958) that was swiss-assembled. Maybe on a exception basis, some

cuda hunter said:
That is one stunning car!

I'd like to find one that looks like that here on our continent. Black with blue guts is phenomenal!

I don't remember seeing the fender tag in the ad. Just that Automontage Schinznach AG tag. The "farb" line ("color" in German) shows the model, but a research on Google show that this assembly plant oftenly put the model of the car on that line instead of the color code.

And maybe the plant assembled some other cars than A-bodies, on a per-demand basis, for tax reasons. 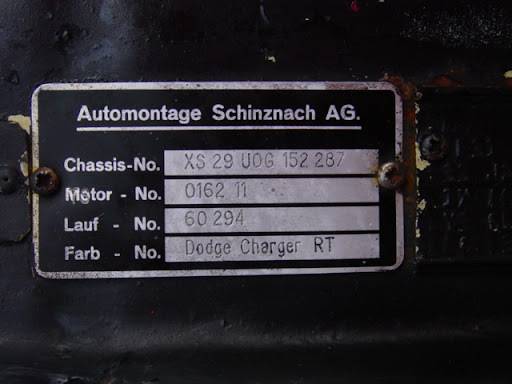 In German, but the list of cars is understandable (but seems a tad incomplete):
AMAG, Schinznach - Swiss Car Register

Some nice pictures too.

330dTA said:
OK, Thanks. I have never seen such a code on a Fuselage Chrysler. Every one I’ve ever seen has ended in ”C”. So regularly this would have been ”T0C”.
Click to expand...

A few C-bodies have been assembled in the "F" plant in Newark, Delaware, and not only export models. There are some 1970 Newports an New Yorkers in the U.S. with that plant code in their VIN. I just don't know how many were produced in that assembly plant -- and why. I would assume that sheetmetal was pressed only in the Jefferson Ave. plant in Detroit and then shipped to Newark, Delaware for assembly?


FredNY66 said:
This one is Swiss-assembled, at the Schinznach-Bad plant of Automontage Schinznach AG (now named AMAG). It received the kits from the US, and then assembled the cars. Perhaps the F means this Swiss plant, or that the kits were shipped from the Newark factory.
Click to expand...

As 330dTA already mentioned, C-bodies of the Fuselage era were not assembled in Switzerland (or in any other location in Europe).

So the tag is just a tag for Automontage Schinznach as the importer, and not as the builder. Thanks, it makes more sense indeed now.

I found the assembly breakdown (thank you Google):
AMAG CH
There's a table that shows everything at the bottom of the page. As it says "Quelle : AMAG Schweiz", we can consider it accurate (Quelle = source).

Thank you again, @FredNY66! - I think some of the confusion concerning which models were produced in CH and which were not may be due to the fact that in Switzerland they sold Plymouth Valiants as a "Chrysler Valiant". Which makes it a "Chrysler" in period CH statistics.

By the way, I also noted in period Automobil Revue Katalogs (1970 and 1971) I happened to be looking at the other day, that the NY'er was listed at about the same it sold for now. (Back in the day it was around 32 thousand Swiss Franken.)

And contrary to some other information the NY'er had a list price in Germany, too. So I would think at least a few of them were exported to Germany back in the day, too. Although the Auto Motor und Sport editors commented that the American cars were not very popular.

Dodge and Plymouth "generally" were sold/badged as Chrysler in Europe. You'll even see a "Chrysler Viper".

I had a 1967 Plymouth Belvedere I that I bought in Belgium in 1990. It was one of three six-pax wagons shipped to a converter in Antwerp to convert into funeral cars. Two sold to brothers who were funeral directors in Brussels, and the third went from Belgium to a funeral home in Sweden. I still have the build sheet from this car. That car has the tag similar to the Chrysler above, and also had the US fender tag. The car was a Special Order car, plus Export. It had the Hemi suspension under it - rear springs, Hemi torsion bars, 3.55 8-3/4 rear and XHD shocks - yet was a 225/3-spd manual on the column! Metric speedo, no radio, had the larger heater in it, plus a factory clock. Black with blue interior.

Another thing it had was that the VIN was stamped in one-inch-tall characters on the top of the passenger-side frame rail, very visible when the hood was opened and you looked down. It was also in the stock location in the A-pillar jamb.

The Euro-built A-body cars have a truncated VIN number - an example would be: HN120674 (not an actual VIN, just an example), and were built in Switzerland and Belgium. Remember, an A-body is considered a relatively large car, by European standards of the day. Also, only "A" and "C" body cars were built with available RHD for the UK, Ireland, Australia, New Zealand and India, to name a few. NO "B" or "E"-body cars were built with RHD, nor were any built in Europe. The LHD versions were available.

Robert Saigh said:
Nice car! Interior very nice...steering wheel looks perfect and "Rimblow" intact. Quite steep on the price $$ though! Someone in Europe will enjoy it once the price gets cut in half!
Click to expand...

Have you ever tried to purchase a car in Europe? The price is actually well in-line with reality. Try restoring one here in the US for that money! Plus, it's ready to go. It has a cool, known provenance. It's drop-dead gorgeous!

In Finland the Chryslers, Plymouths, and Dodges were sold and badged as they were built. No "Chrysler Valiants" here. They were Plymo's. A Dodge Dart was a Dodge Dart. And so forth. My father had a '57 black Belvedere, a '62 Chevy Bel Air, a '65 Ford Galaxie 500, a '66 Chrysler Newport, and a '70 Chrysler NYer. When I was a kid I thought they were normal size, and all the rest of the cars were somehow shrunken. When you drove next to a say, period Opel Kadett in your NYer, you would look down at them (in strictly physical sense only, of course ;-).
Nowadays it's different. Try putting an Audi A6 Wagon next to a '70 NYer. They are almost the same width.
You must log in or register to reply here.