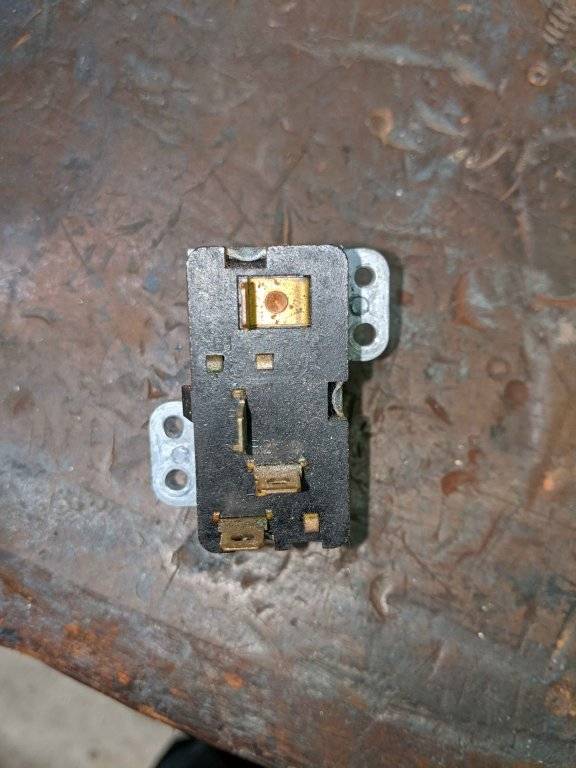 Bottom
My plan was to use my endoscope held in one hand and a small magnetic screwdriver held in the other hand to see the back of the switch and the 2 screws. The endoscope broadcasts by Wi-Fi to my phone. I was going to have my wife hold the phone where I could see it while I was lying on the carpet under the steering wheel with my head against the transmission hump. 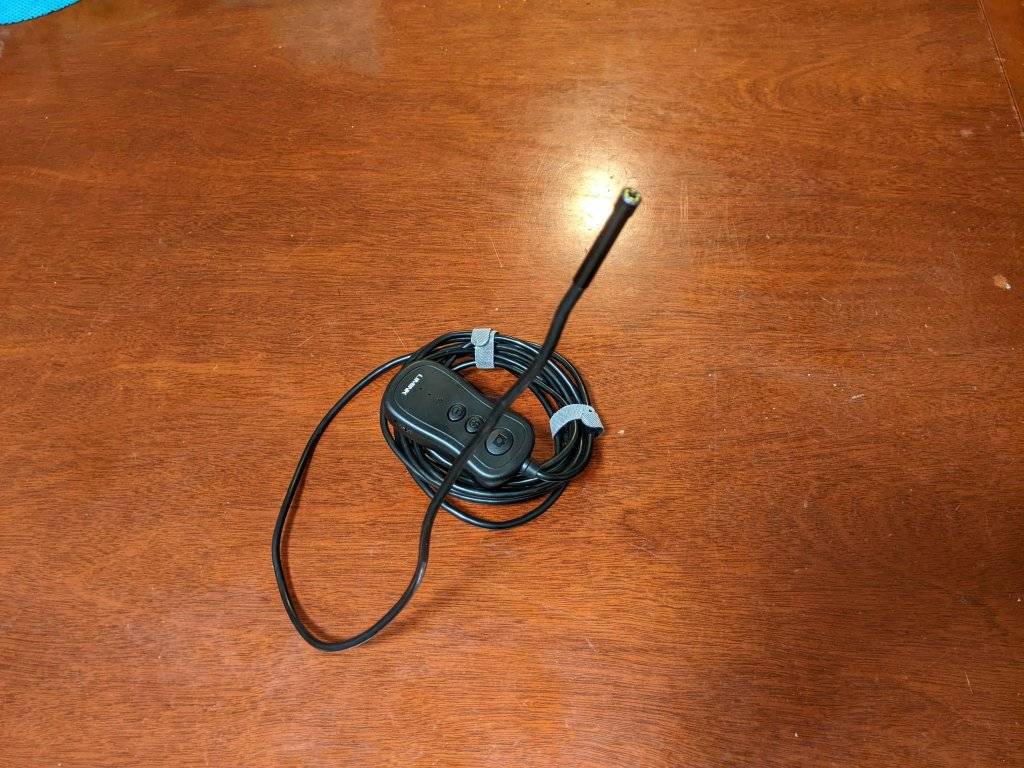 Cool Tool. See into all sorts of places. Big John clued me in on this. Bought on Amazon. 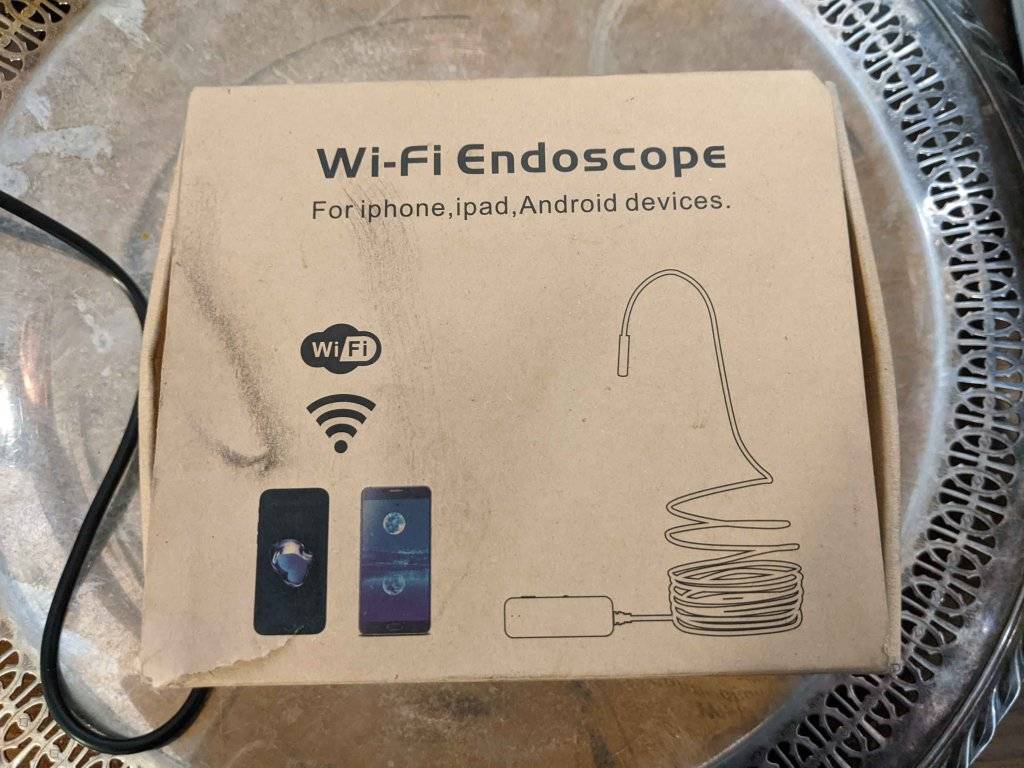 My plan did not work because a large black panel at the bottom of the dash shell blocks using the camera on the endoscope from below to see the headlight switch. Further, when I tried to hold the endoscope camera directly behind the switch, my hand blocked the camera as soon as I tried to put the screwdriver against the screw heads.
Black dash shell panel obstruction, view from below steering column 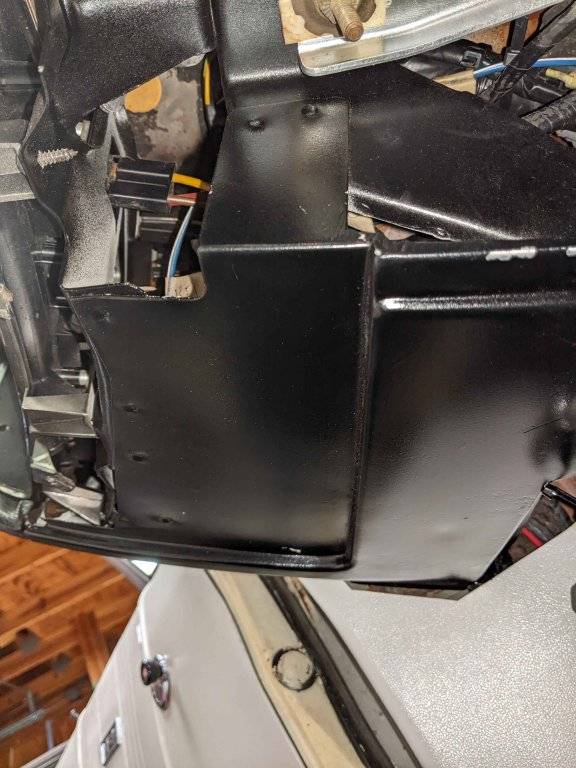 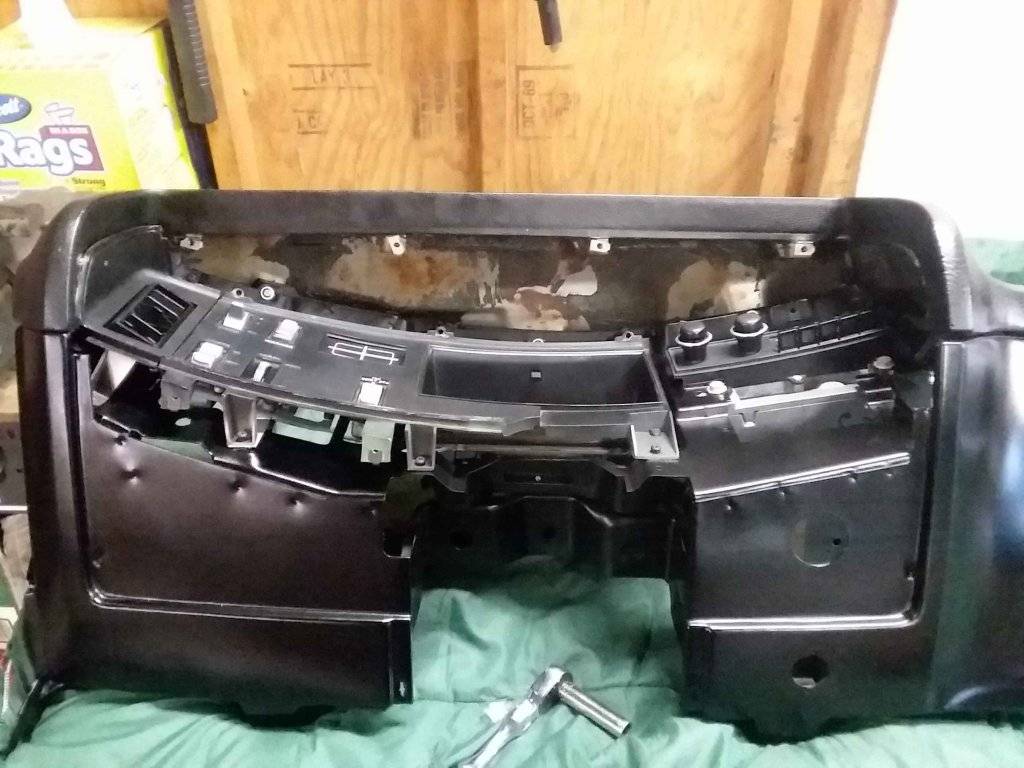 The endoscope has a light as well as a camera and the light can be shined through small openings at the bottom of the dash shell, but removing the 2 screws that hold the headlight switch in position is still basically something that I did by feel. 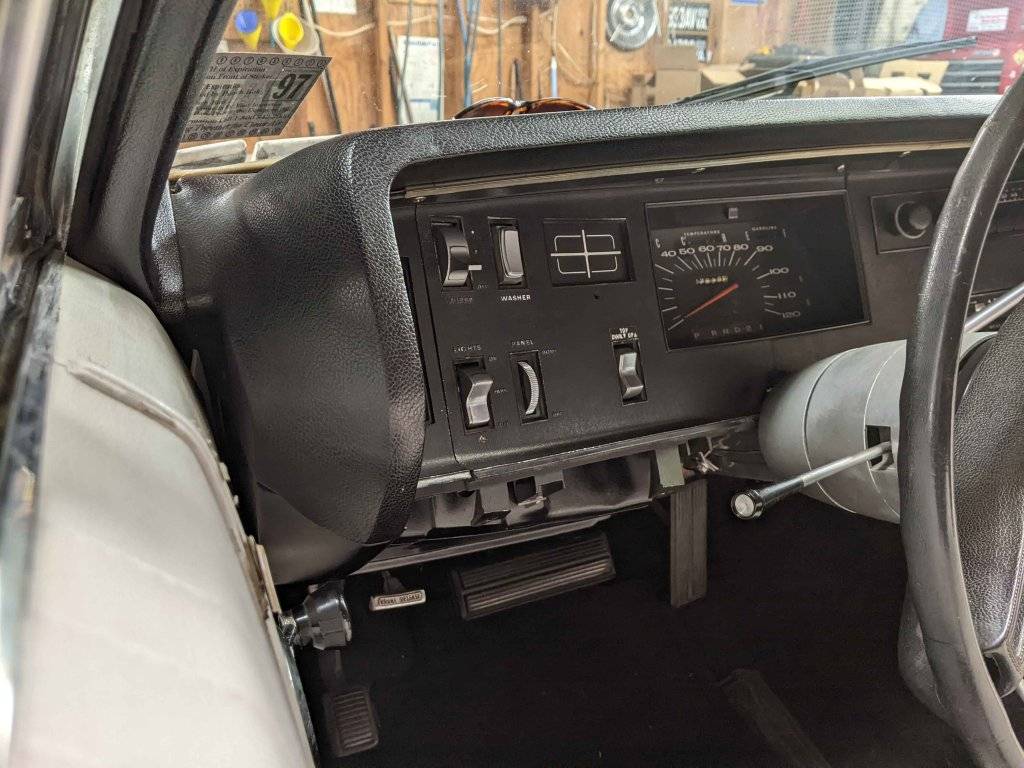 Magnetic Screwdriver, only tool for this job 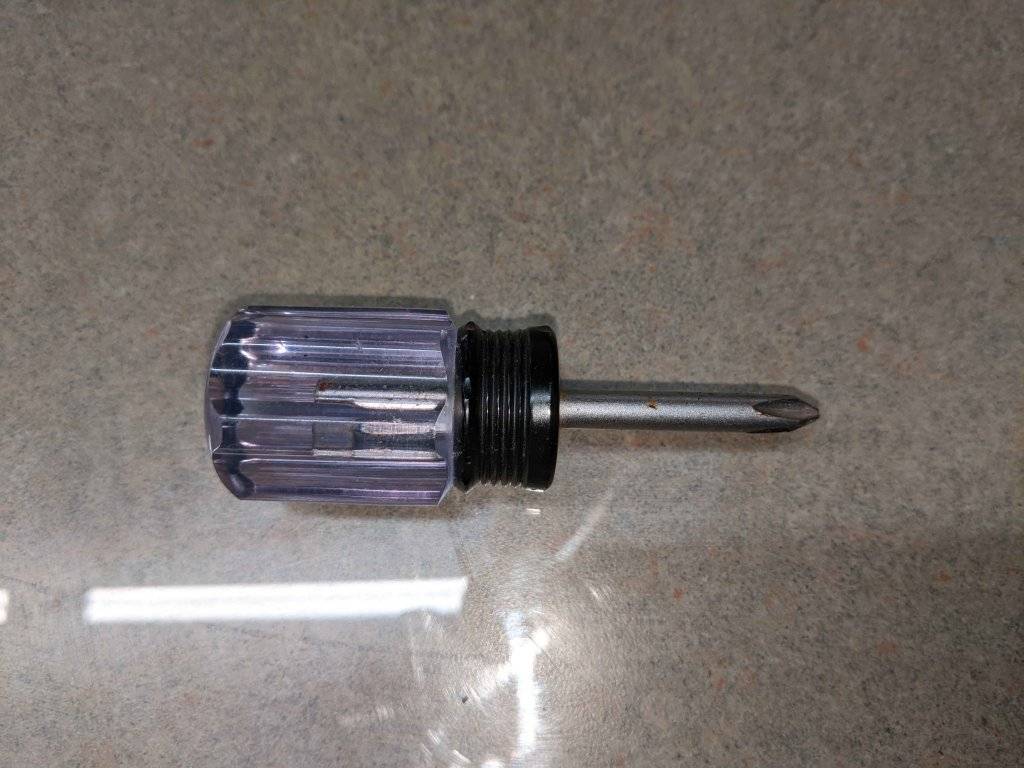 I had my fingertips on the top of the shaft of the Phillips head screwdriver, which was magnetic. I essentially felt the corner of the headlight switch and then pushed down trying to engage the screw head with the screwdriver shaft. By turning the shaft slightly in both directions I got it to line up on the screw, I moved my fingertips up on to the handle while keeping pressure with my palm on top of the handle, and then turned the screwdriver to remove the lower right headlight switch mounting screw. The upper left screw is a bit more difficult because of an AC vent duct, but by feeling its position with my fingers and then following the same process that I used with the other screw, I was able to engage the screwdriver with the screw head and then move my hand back on the handle, turn the handle, and remove the screw. Headlight switch came loose, so I could remove it and the 2nd screw from the back of the instrument panel.
Back of the instrument panel while it was on the bench 5 years ago. 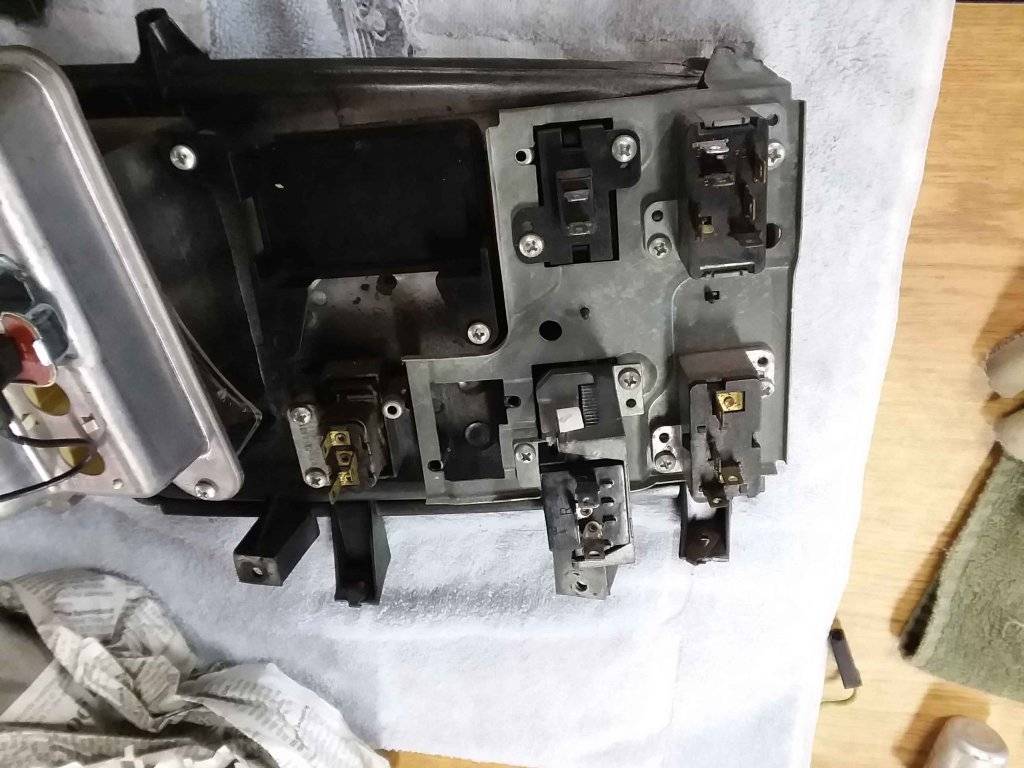 For installing the headlight switch that I had repaired, it was very important to have my wife there is an assistant. I needed somebody to hold the repaired switch on the passenger side of the instrument panel, essentially holding the same part of the rocker switch that you depress to get headlights or turn the headlights off. While my wife tried carefully to hold that switch centered in its opening, I put the 1st screw on the end of my magnetic Phillips head screwdriver and by feel lined it up on its hole, turned the screwdriver, and installed the lower right screw. The left side screw was more difficult, but on my 2nd try I did get the screw to go into the hole and was able to screw it into place. Following that, I reconnected the headlight switch 4 – spade connector.

Nice information, and good pictures too. I am sure this will assist me some day in the junkyard as I am trying to remove some parts. Thanks for taking the time to post.

challenger340 said:
Nice information, and good pictures too. I am sure this will assist me some day in the junkyard as I am trying to remove some parts. Thanks for taking the time to post.
Click to expand...

You're welcome. Glad it helped somebody.
You must log in or register to reply here.