jrdudeman said: To my knowledge, there was a few more than one 300 Hurst with manual windows. My dad owned one of the manual window Hurst's sometime in the 1980's or 1990's. Trevor may have seen this car at my dads place way back then.

Is it possible that your father actually owned the magazine car? Do you recall any of the other options on the car?

The magazine test car was light on options:

Jeff - As I recall the manual window car was quite rough and neglected when my dad purchased it in 1980's. My dad had five 300-Hurst cars over several years, and three of them were quite neglected and rough. To answer your question, I do not know if it was the magazine car? I do remember my dad pointing out the manual windows, and when sitting in the driver seat, the manual windows was obviously a bad design oversight. I do not recall options on the various 300-H cars he owned. During that era, I would come home from college or come visit my folks and boom, more 300-H cars, various Imperials and other Mopars out in the back yard or garage. Many Mopars came and went like the wind. Except we did have one really nice Hurst that was in our family from about 1978 until 2005.

Back in the 1980's and 90's when my dad had several of these cars, we were not into researching and documenting the VINS, data plates etc, and I do not have documentation on any of them except, I probably still have the VIN number from the one I sold in 2005.

It's looking like a few early production cars escaped the factory with manual windows before Chrysler realized the crank handle interference problem and made power windows standard.

Without spending a ton of time, two searches did not produce any links to the article that I remember reading.

I did find two references to manual window cars, and of course they contradict each other a bit, but both claim there were a few crank window cars built early on.

Part of an article in Hot Rod Magazine:
by Karl Pippart III Sep 1, 2000

The 300-H made its public debut at the Chicago Auto Show, which ran from February 21 through March 1, 1970. The 300 Hurst prototype was used in factory publicity photos and had the Imperial seats, but with Chrysler headrests. The rear valance panel also had cutouts to accommodate the 1970 Plymouth Sport Fury GT chrome exhaust tips (Mopar Muscle September 1999, page 84). The prototype was last seen in Motor Trend's April 1970 issue, when it was taken out for some highway cruising in Michigan.

Production was originally supposed to be a very optimistic 2,000 units, but a sluggish economy brought the total down to about 500 copies. A Chrysler document from September 1, 1972, put the figure at 485. Hurst kept a pair of parade/promotional vehicles; one was the convertible and the other was a hardtop with a power-operated, sliding steel sunroof. It is known that three cars were built with manually operated side windows; two were delivered as new cars with consecutive VINS to an Ohio dealership, and the third was the test car for auto magazines. The test car lacked air conditioning (the only one?) and was first evaluated by Road Test in their June, 1970 issue (11/44 mile: 16.8 seconds at 87.3 mph), and then by Car Life in their August 1970 edition (11/44 mile: 15.30 seconds at 94.43 mph, with a 127 mph top speed).

Your father may have had that second Hurst that was sold at the Ohio dealership. I'll have to keep looking around for the article on the magazine car. I'm pretty sure it was in one of the Mopar mags that I subscribed to some time back.

Here's a Hurst car that popped up for sale in the Miami area. I "think" it might be the same car that sat outside of a repair shop along 301 in Starke, FL, but that is a guess. I saw the Starke car a few times around 5-7 years ago and it resembled this Davie car. Just guessing.

Can't have too many pics of Linda! 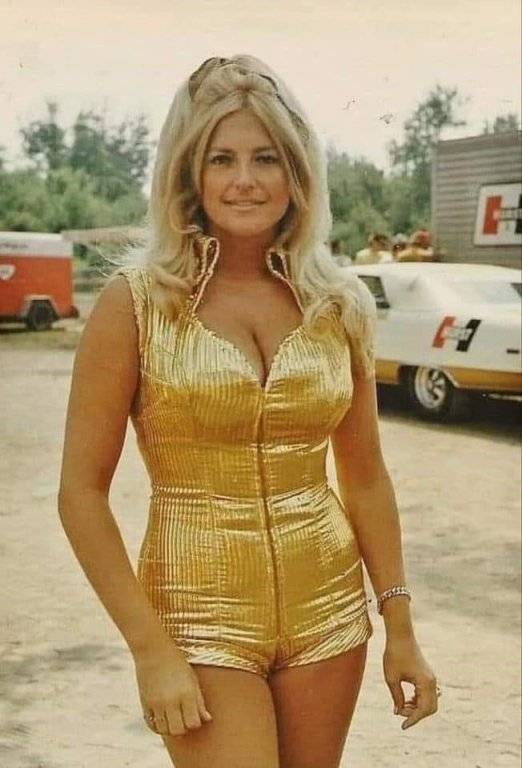 These photos are from the Chicago Corvette & Muscle car show probably 5 years ago. Unfortunately not fender tag picture. 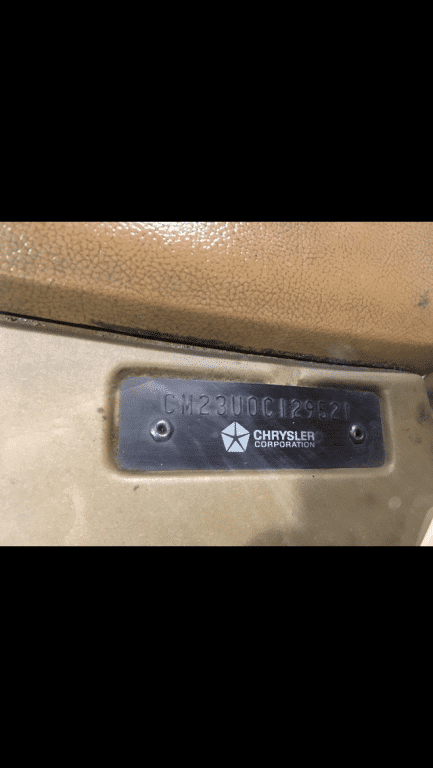 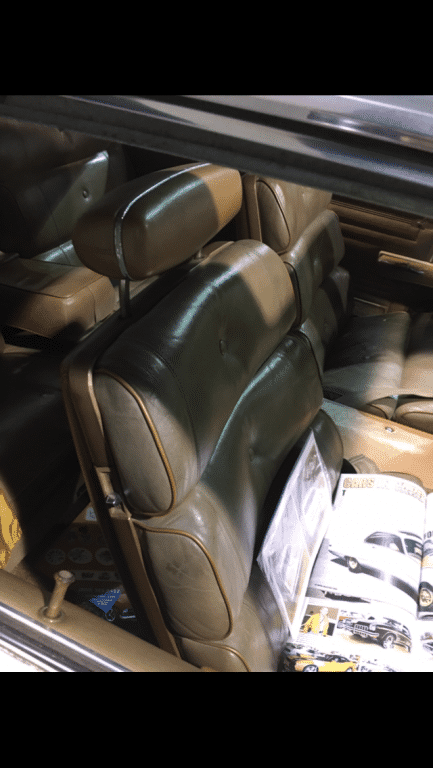 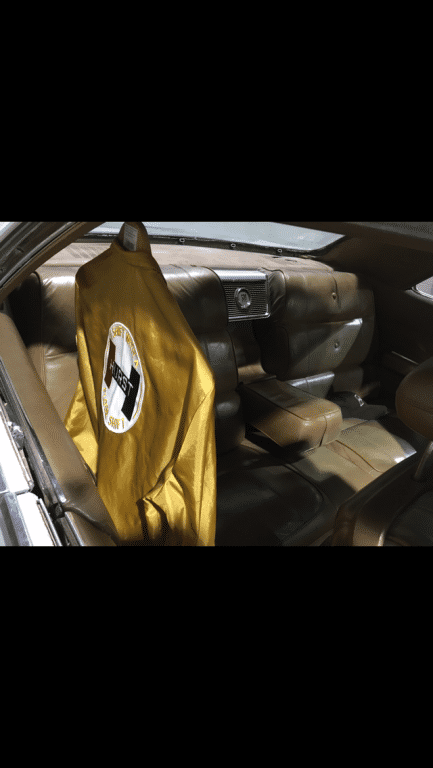 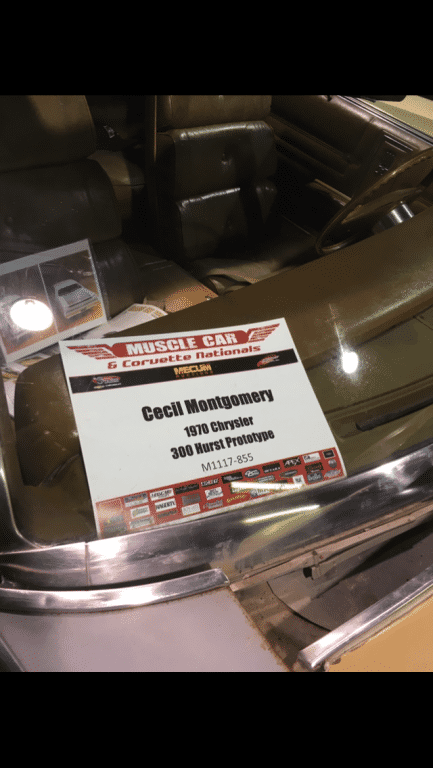 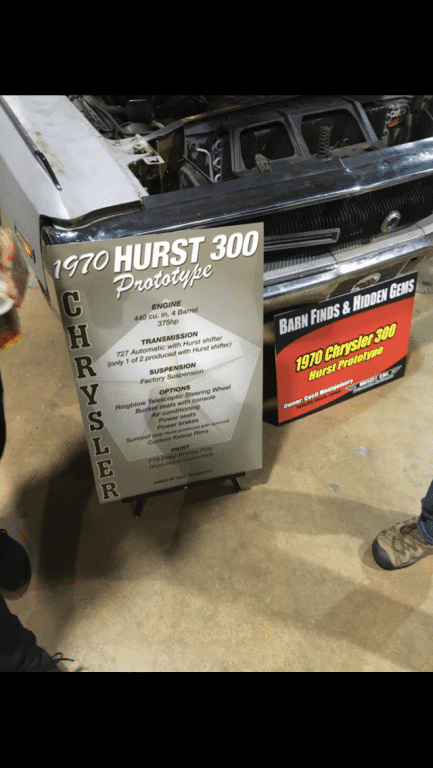 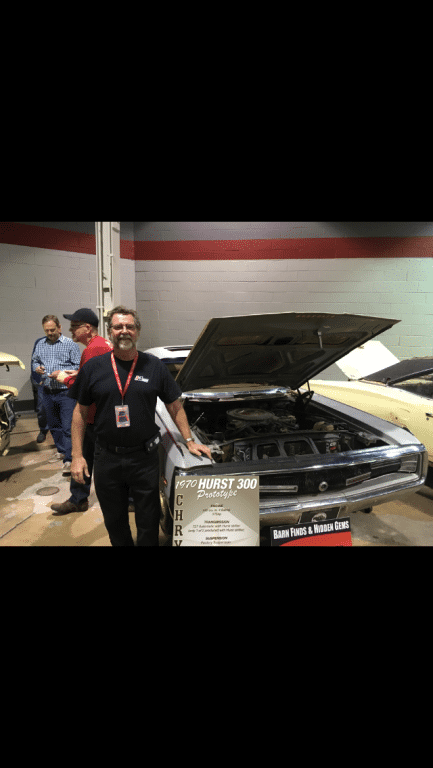 haywire 440 said:
These photos are from the Chicago Corvette & Muscle car show probably 5 years ago. Unfortunately not fender tag picture. 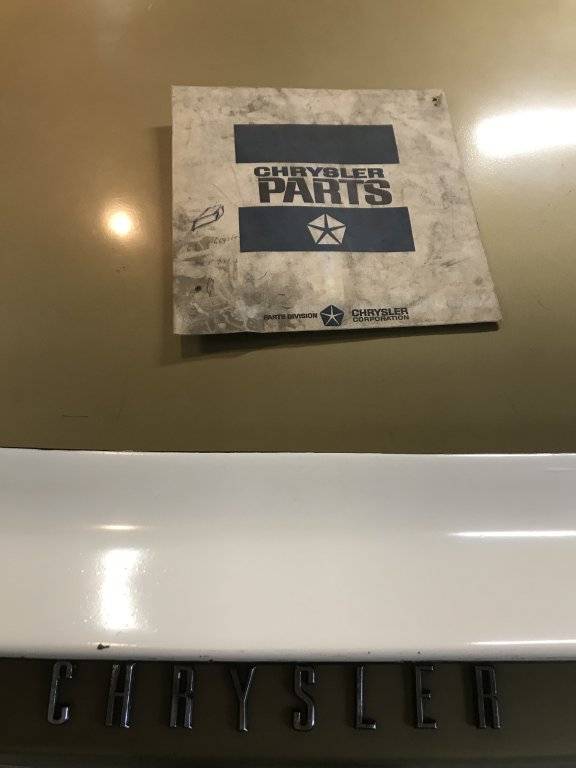 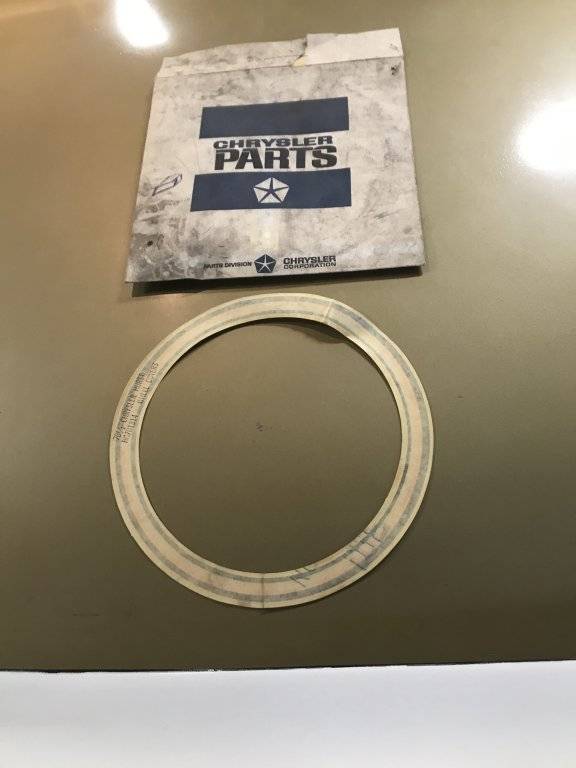 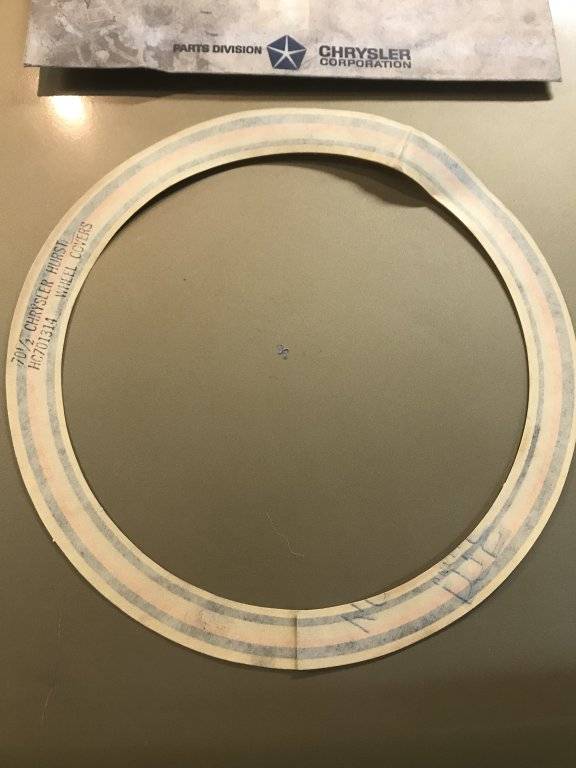 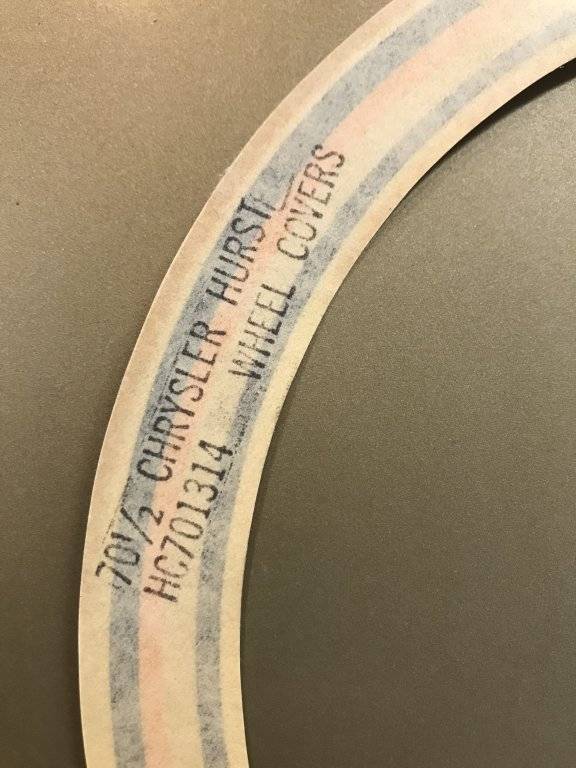 So do you think that's a "replacement part" so that a body shop could duplicate the original hand-painted wheel? 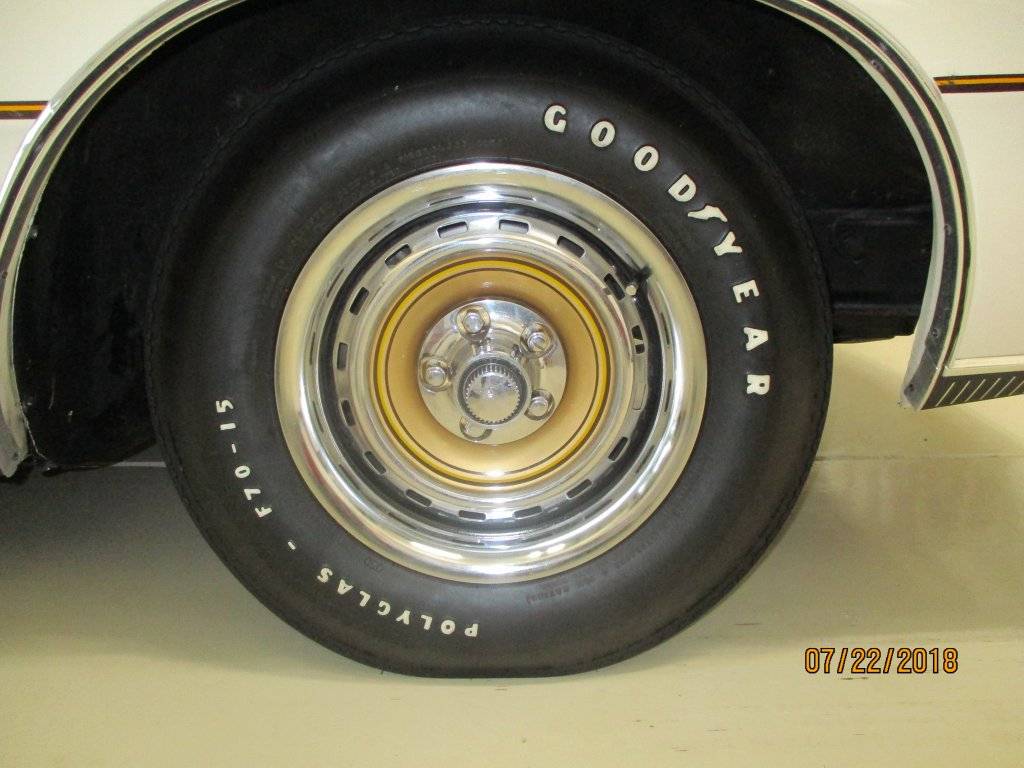 Trace 300 Hurst said:
So do you think that's a "replacement part" so that a body shop could duplicate the original hand-painted wheel?

No I don’t…contrary to what some believe, none of the Hurst 300’s were hand painted, except one, possibly two. “Hand applied” decals yes.

The “Hurst wheels” were all decals. It’s in the Hurst parts list

Ok, not sure if this is relevant, but I just received a gas tank that was pulled from a Hurst. I believe it to be the original tank. I don’t see any numbers stenciled or stamped, but there is this label that I found, and thought I’d post it before it gets covered up forever. 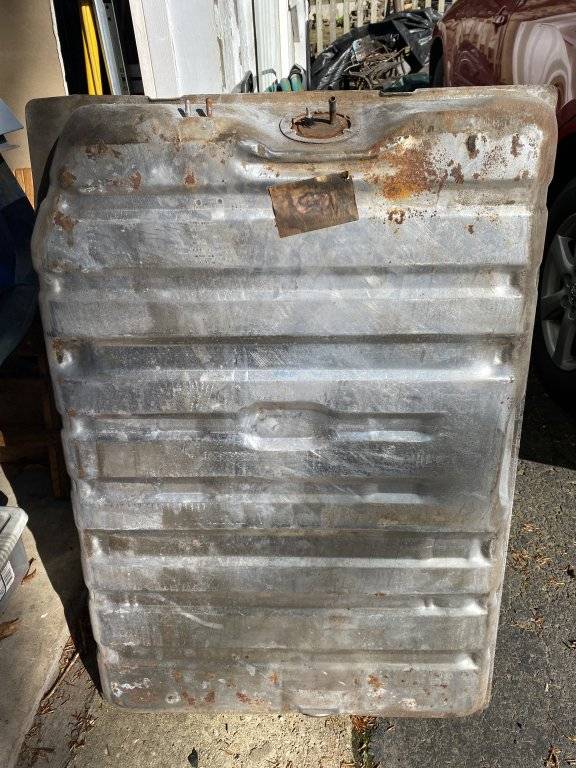 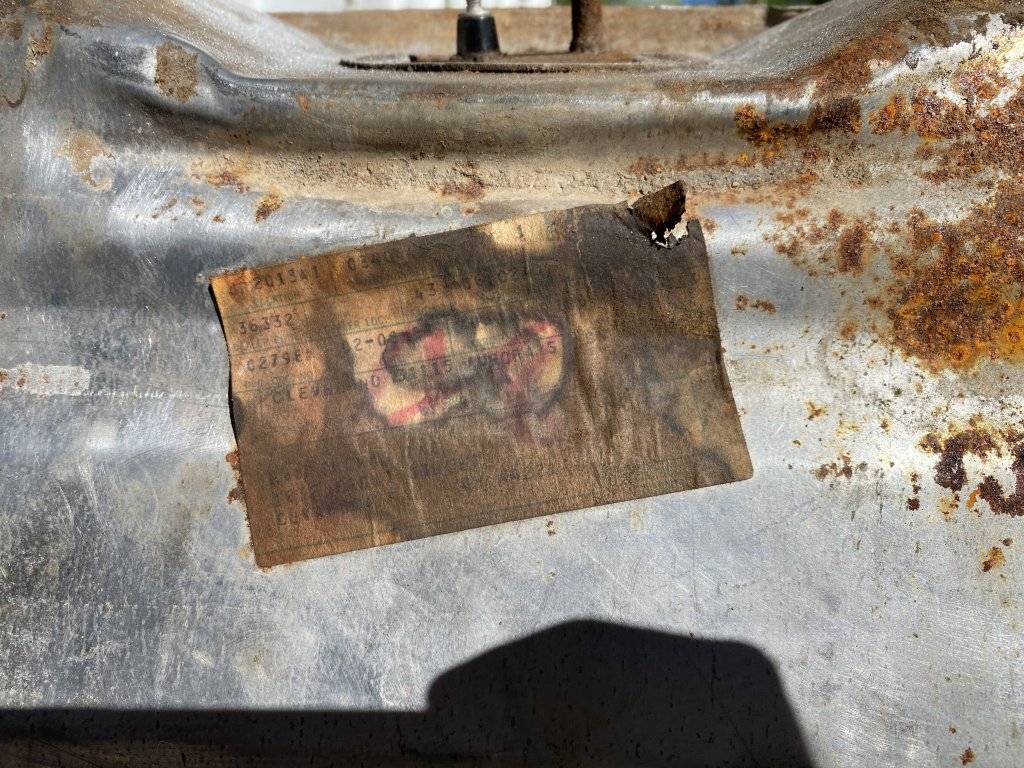 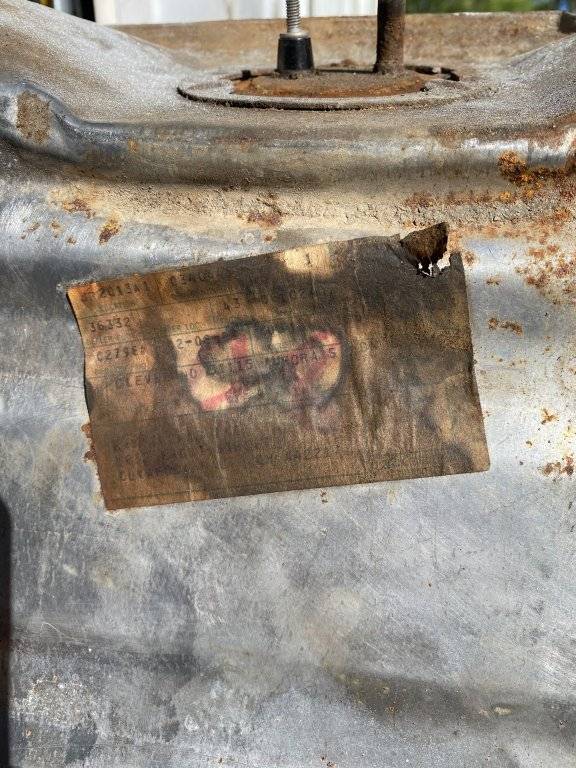 Seen by me the other day in Bardstown, Kentucky. I was doing the Bourbon Tour for a week with motorcycle pals. 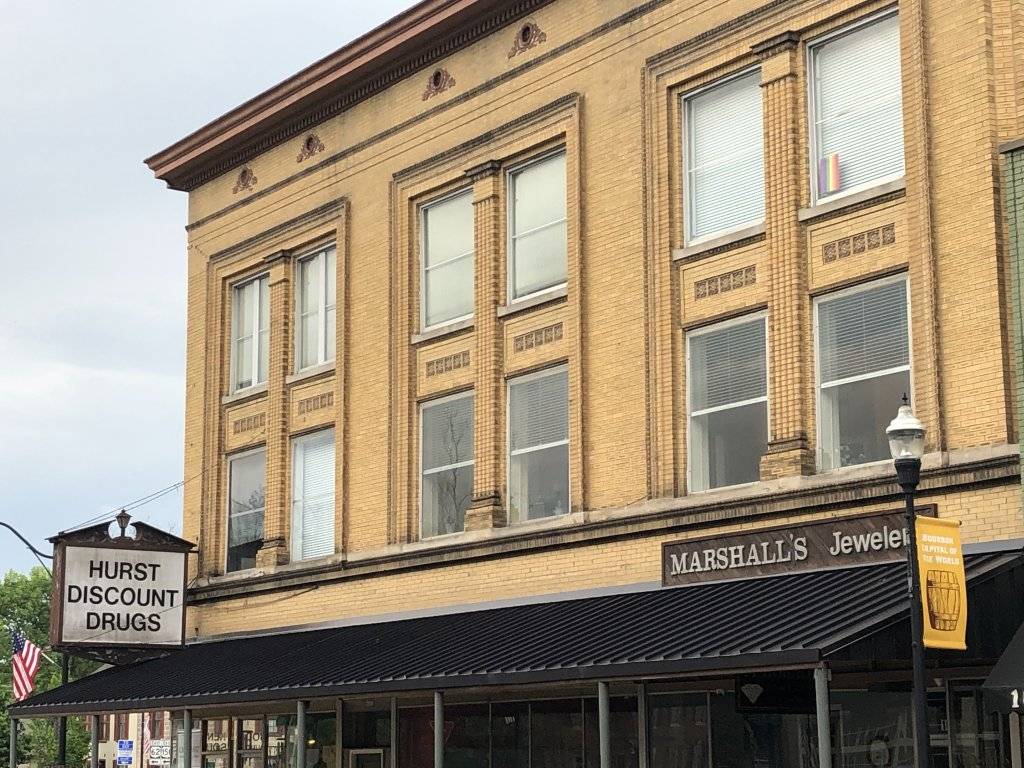 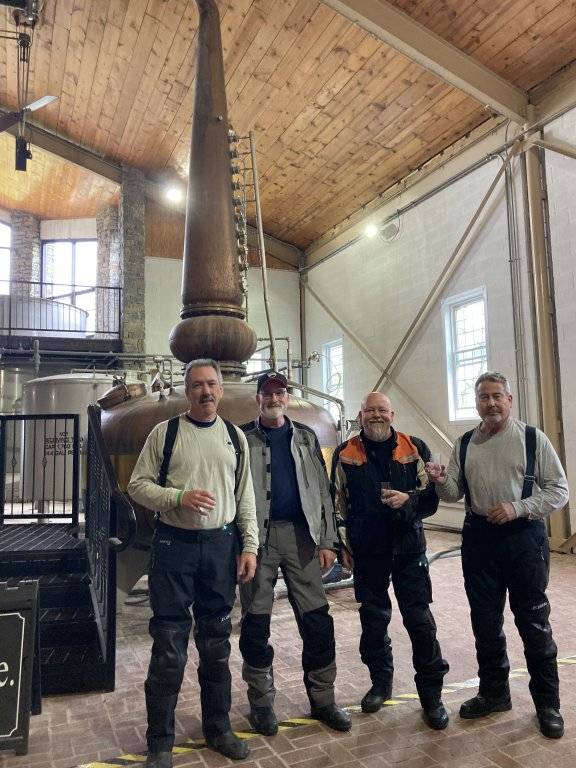 Any idea why it would be marked as 70 1/2? Also, did all Hursts come with Rallye wheels? As it says "wheel covers".

Just one more question, any idea why the first post is blank? Seems kind of odd. It's been a couple of years, however based on my unanswered question posted shortly afterward, it was regarding a tag picture stating there was a tank within a tank?

That's the label that came on replacement parts.

Should have the dealer name that ordered the part on it.

Here's a couple examples of the label I found on the intrawebs. 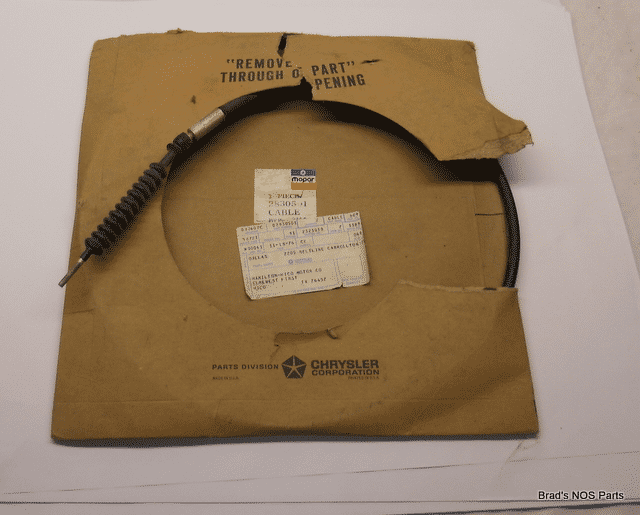 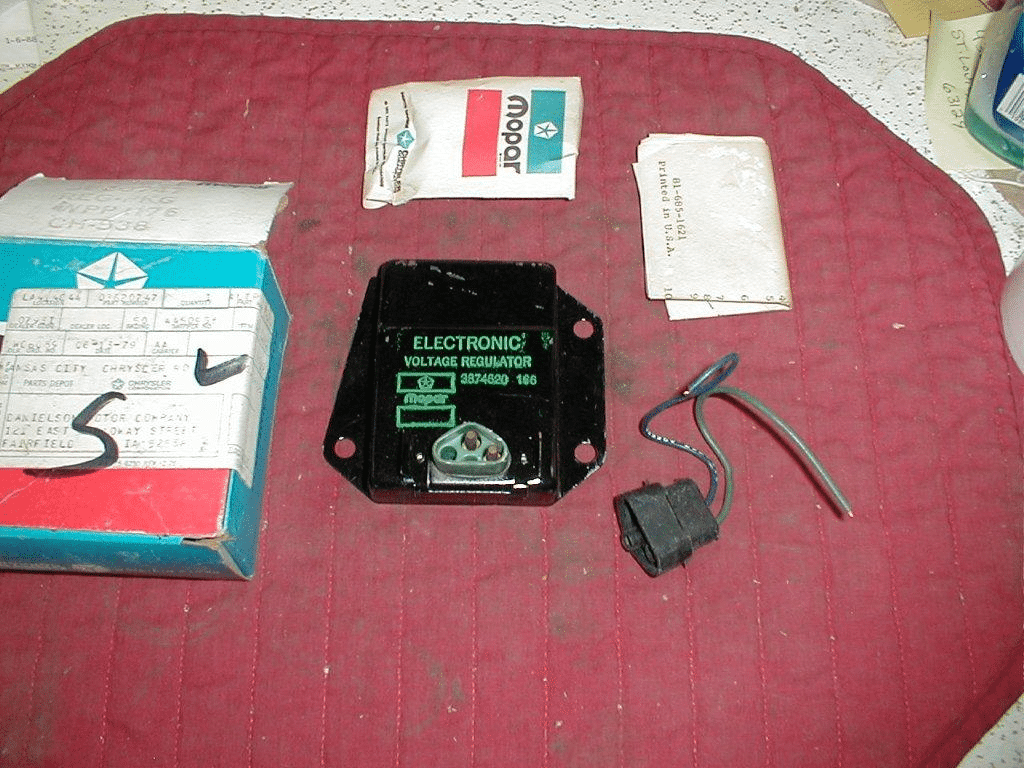 Big_John said:
That's the label that came on replacement parts.

Should have the dealer name that ordered the part on it.

Here's a couple examples of the label I found on the intrawebs.

Thanks, that's actually what I was wondering. That would place the ordering dealership in Burton OH. Now if I owned the car, I'd have an piece of the history puzzle, but instead it is an important piece in getting the TX9 back on the road.

I never realized that James , I bought my Hurst at auction in Wooster , Ohio . Could I have the tag back ?

Samplingman said:
Thanks, that's actually what I was wondering. That would place the ordering dealership in Burton OH. Now if I owned the car, I'd have an piece of the history puzzle, but instead it is an important piece in getting the TX9 back on the road.
Click to expand...

Hap said:
I never realized that James , I bought my Hurst at auction in Wooster , Ohio . Could I have the tag back ?
Click to expand...

So everyone understands, that tag on the tank is just for the replacement part. The dealer that ordered a replacement tank is named on the tag, not the dealer that sold the car.... Although a warranty repair at the selling dealership is quite possible, anyone could walk in and order a new tank.

I'm still learning a lot about this car .
Thanks for the sharing of knowledge . Here is mine , Purchased new from Graham Chrysler in Wooster , Ohio .

Hap said:
I never realized that James , I bought my Hurst at auction in Wooster , Ohio . Could I have the tag back ?
Click to expand...

I’ll certainly try to take it off, but it is very brittle and the edges are starting to crumble.

Not a big deal on the tag . I thought it was something important to the car I missed . Big John set me straight . I'll try to upload some pics again . 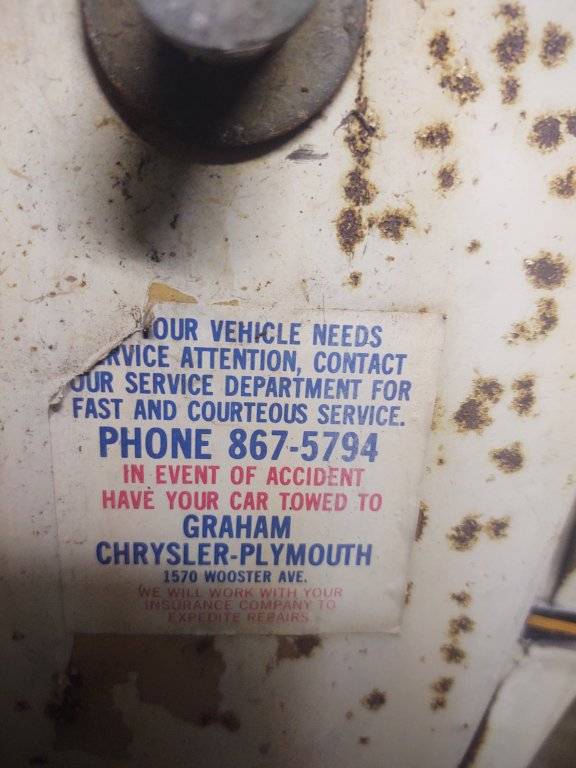