Hey folks, I'm totally new here (and to all things American and V8 but I feel like I'll be a master of them after all the work) ive been using this forum for months when searching for help to all my problems (of which there have been MANY!)
So thought I would register and say hi.

Also, I've got a bit of another problem. The car starts fine, everything electrical works (all the lights, the heater blower, the wipers, the horn etc etc)
But it's not been charging, so last night I took to checking all the wires and found a main black wire burnt right though at the firewall bulkhead connectors.

Also, the stock ammeter has been bypassed (which I'm lead to believe is good!) But again there's no fusible links and it just uses constant hot wires to get it's power
(black off the main welded splice under the dash and red off a main red that runs from the starter relay through the bulkhead and splits off to a 30amp fuse behind the drivers kick panel and also the back of an aftermarket ammeter gauge)

Am I right in thinking that what I've got is a fire waiting to happen? If I disconnect the wires from the aftermarket ammeter gauge I lose ALL power to everything. No key, no lights, no nothing (I still have power in the engine bay from battery to starter relay but nothing inside)

Oh and here's a pic of the Chrysler 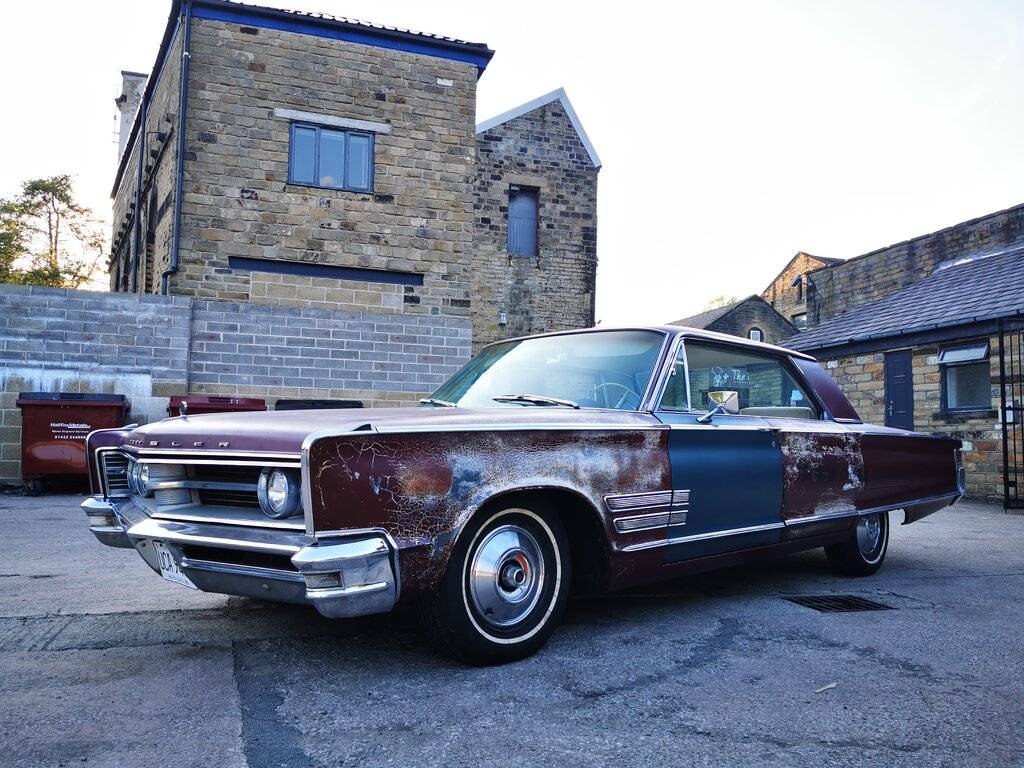 Welcome from the Keystone State.

I am only aware of one fusible link. It is located on the engine side of the bulkhead connector. Unfortunately I don't have my FSM with me to tell you the specific wire.

This a a great thread that details out the ammeter bypass.

As far as your alternator not charging if it is your voltage regulator (member) @FURYGT sells a great replacement.

I also saw from your FaceBook post that you do have the wiring diagrams. That is a good thing.

So - the no charging issue is likely due to the melted wire you discovered that runs to the alternator, but if it continues after repairs, time to swap out the regulator.

Yes, if you continue to use the bulkhead with the main power wires routed through it, then you've got a fire waiting to happen. It's a poor design, and has been the death of many cars over the years. ELIMINATE THE BULKHEAD CONNECTOR for the high power wiring routing.

So - how to deal with it? What I describe below is the BULKHEAD BYPASS. Another upgrade you may choose to do is the Ammeter Bypass, which you can search here on the site, however, the single most important wiring safety upgrade in my opinion is the Bulkhead Bypass, and should be performed first.

OK - if your ammeter is disconnected, then it may be because it's not working and hence the aftermarket amp gauge. Not to worry, and keep in mind that the aftermarket gauge should be wired the same way the original was, without the splices you described (coming off the feed to that circuit breaker in the kick panel - that's likely for power windows and/or power seat. Eliminate that and wire in the gauge properly - see below). The ammeter is good for watching the charging system, and I like seeing it. If you can find a replacement for later down the road, fine, but at the moment, don't worry about it other than wiring the aftermarket gauge in properly. ALL the power to most of the car runs through the ammeter, so that's why (since it's bypassed), that when you disconnected the aftermarket amp gauge, no power.

The red 10 awg wire that ran to the amp gauge from the battery stud on the starter relay is supposed to have a 14 awg fusible link right off that stud, which in turn is supposed to connect to a spade connecter in the bulkhead, which in turn connects to another large gauge red wire that runs to the RED terminal on the amp gauge. Too many connections.

The black 10 awg wire that you found melted away at the bulkhead is the wire that comes FROM the BLACK terminal on the amp gauge (or in your case, the aftermarket gauge), and runs first to the factory welded splice to provide power to all the systems, and then to the stud on the alternator. Technically you can simply connect the red and black wires that connected to the ammeter gauge together with no gauge at all, and the car will have power. However, this issues are in the spade connectors at the bulkhead, and the fact that the main power feed is not protected by a fusible link. Bad, very bad... as you've already surmised.

So - to make things safe (and to be able to use your aftermarket amp gauge or a replacement dash gauge when you get one), you can do this:

Here's how I did it... (copied from another post)

I just finished doing the bulkhead bypass on my 66 T&C. I kept the amp gauge wired into the loop though.

Even though some 15 years ago I had cleaned and checked everything down there and packed it all with dielectric grease, it was time to do it properly, as this past fall just before winter nap time I was getting the old "burning wiring" smell, so I knew that was a call for help from the car.

I was a bit overwhelmed about diving in, but I figured I had to. And it wasn't so bad after all...

After peeling the 3 multi pin connector clips off the main bulkhead block, one at a time I removed each individual wire terminal from both the bulkhead and the three clips and cleaned them up with emery cloth (I replaced a few too), and made all of them happy again.

As well, I eliminated the two 10 awg wires going to the amp gauge from running through the bulkhead - and instead ran them as unbroken 10 awg wires through a firewall grommet - in your case, you likely can poke them through the speedo cable grommet. I added a multi terminal junction box on the inner fender (NOT a common strip bus bar), and terminated each of the two wires at their own junction block, and then added a fusible link to each one by running the fusible link to another terminal, and then the original wires continued from there to their destinations - the black one runs to the alternator, and the red one to the battery stud on the starter relay, through the original fusible link. You will have to use a proper butt connector to splice to the black wire close to the factory welded splice, but the red wire going to the amp gauge can be truly unbroken.

Note that the small wire running to the horn relay is ALSO a fusible link, since the horn circuit is live 24/7. If it looks unmolested and the horn works, it's likely the original fusible link. 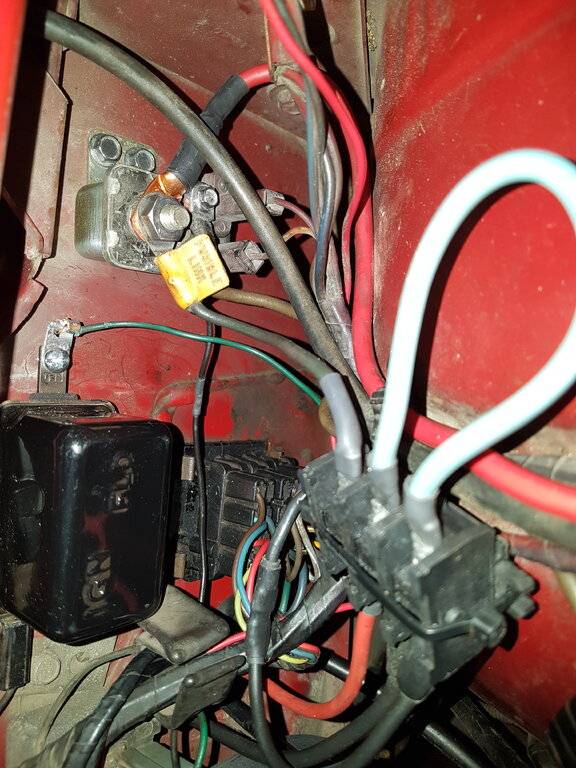 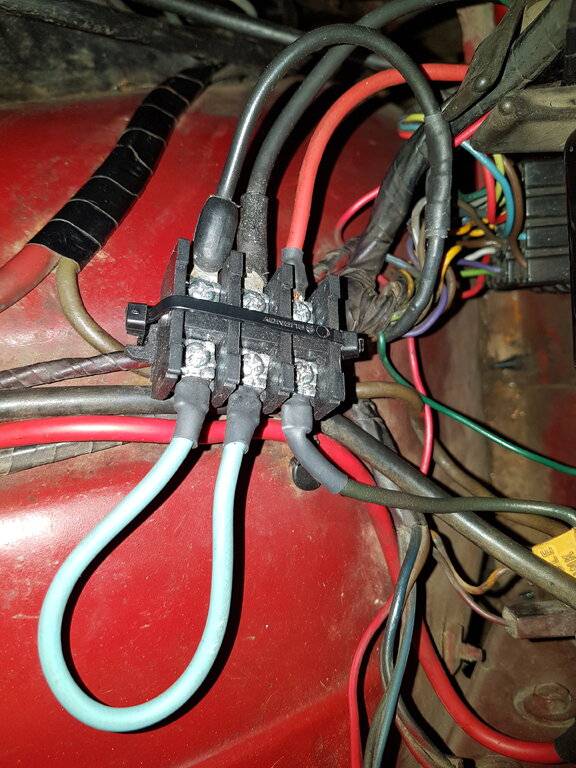 So I'm pretty well covered in the case of any issues, AND I keep my amp gauge function which I like. I also wire brushed all the starter relay studs, and replaced quite a few suspect connectors underhood, and in the process, I figured out how to use my dad's packard terminal crimper - makes them look just like factory! But now I need to buy more 12/14 ga packard male terminals!!

Working methodically it took me about a week, an hour or two every day.

In regards to the Ammeter Bypass mentioned above - some choose to do it, and live with the slightly changed function of the amp gauge, and others choose to convert their gauge to a voltmeter instead. Again, search the site for these instructions.

Brad Kenyon said:
Oh and here's a pic of the Chrysler

You’re in the Mother country? What’s the history of the car?

Thanks everyone, Ross, that's amazing and helps a lot thank you!

I'm in the UK, the car came over in late Feb this year from Florence SC, it had been sat a while and suffered some fire damage to the paint. The carb was shot, the radiator was shot, the brakes and steering components were shot, it needed a lot of love but it's getting it and is slowly become the car it once was

The "clean" side of the car 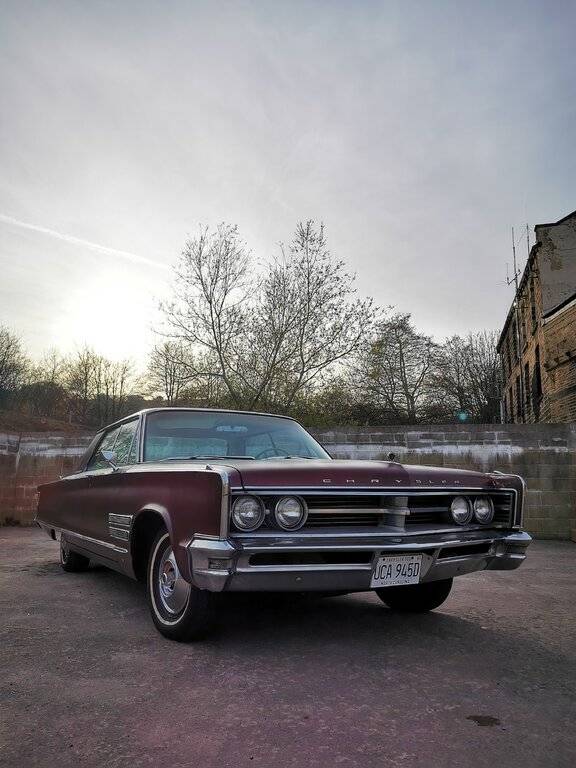 A slight variation to the firewall bypass is to get a fuse holder for a 50-60 amp fuse. Install in the wire between the battery and starter relay. It's a bit more convenient to replace a common fuse (keep spares in the glovebox) vs replacing a fusible link. The factory did it that way because it was the cheapest way to do it, not the most intelligent. Try finding a fusible link when you're sitting on the side of the road.
You must log in or register to reply here.

Chasing down multi ill-wiring, 68 Newport - down the rabbit hole