i got a leak at the area where the dipstick tube goes into the trans, is there a seal for it or anything that i can replace or do i have to pull it out and just smear rtv on it? Also, when i get the tube out, will the trans fluid leak out?

A rubber o ring should be on the end that goes into the transmission, but they can leak. I've used rtv to stop leaky ones in the past.
D

LocuMob said:
A rubber o ring should be on the end that goes into the transmission, but they can leak. I've used rtv to stop leaky ones in the past.
Click to expand...

The transmission will leak a quart or more of oil when you pull the dipstick tube. The dipstick is usually secured just to the rear of the exhaust manifold on the back of the engine by a strap to the tube. Sometimes this strap gets bent upward and no longer provides a good contact with the tube where it goes into the transmission. Usually it is best to replace the o-ring when removing the tube. If necessary, you can also replace the o-ring with a thicker unit to get a better seal. It is difficult to get a good seal with RTV with oil still in the transmission.

There might be hole next to the dipstick that is open just put a 1/4" bolt in it . have seen that numerous times worth a look.
C

As for that o-ring seal . . . a simple auto supply o-ring will work short-term, generally, but NOT long term.

After I'd been in the dealership parts deal for a year or so, I was at the tech's window one day. A tech came up looking for an o-ring for a THM350 dipstick tube. He'd put one on about 2 weeks earlier and the car was back for the same situation. He mentioned that one of my associates had just gotten a correct-size o-ting from the generic o-ring selection. I figured that GM had a number on that item, so I looked it up. Sure enough, there was a part number AND we had some. I gave him one and "end of problem, long-term". So he started asking for THAT one.

I suspect that Chrysler is the same, only thing mightr be finding one at a dealership might be problematic, unless the one for a current model vehicle might be the same size. Otherwise, go to a reputable trans shop and see if they have one.

Key thing is that a generic o-ring doesn't appear to be compatible with ATF as such, whereas the OEMs will be. In this case, specificity is necessary.

Be sure to catch any run-off from when the tube is removed, or might it be a good time for a fluid change anyway?

that o-ring seems to always leak no matter what you do. I changed mine out to a locking style dipstick with a rubber seal insert for the transmission end. problem solved. The bend is different for small/bigblock. This link is for the big block one.

I never had trouble with a standard O-ring IF sized properly.
Never.

As Stan says, the O-ring does have to be sized properly, but I've had them seal up nice and had some that just would never stop leaking.

I think the problem is the area where the O-ring seals on the tube gets distorted when the tube gets bent even just a little during installation or storage.

A lot of people simply don't seat the tube properly.

Look at the most likely , not the most technical...

i would never use an o-ring from a generic assortment in an oil contact application unless it was labeled specifically for oil contact.
M

Use the correct O ring - your local transmission shop probably has them, or give any of the vendors a shout. The tube and hole in the case have to be perfectly clean and grease/oil free. Then seat the tube, bolt it to the bellhousing (not the head, it's a bellhousing bolt in all cases I've seen), and fill the trans. It's best done with the pan off during a transmission filter service so you can really make sure the hole is perfectly clean. A little sand or dirt will let it leak.
M

I tried the correct o-ring, in my case it did not work. The locking dipstick with its gromet style seal worked. 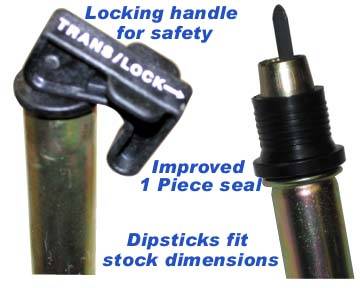 rags said:
i would never use an o-ring from a generic assortment
Click to expand...

MEV said:
I tried the correct o-ring, in my case it did not work
Click to expand...

The locking dipstick was a GM fix for ATF eruption from the dipstick tube under heavy towing conditions in pickup trucks, in the later 1980s. That "boot seal" on the tube is what GM replaced the earlier o-ring seal with, too, in the later '70s.

Is there any expierience with a Lokar flexible braided dipstick? The standart one also has some clearance issues by my valve cover... so i am looking to somehow relocate it with a flexible one!?
Last edited: Nov 20, 2018

It almost sounds like the 0-ring is missing. Some RTV will usually do a temporary repair

So much intense, technical discussion over a rubber ring. That's the level of detail I like...

I am doing this for the first time. I ordered a new o ring. Not 100% sure that was where my leak was coming from but after removing the tube, I found evidence of rtv around the o ring and bottom of the tube. The O ring feels rather stiff and looks out of a circular shape. Leak solving is a messy job, let me tell ya.

Knebel said:
Is there any experience with a Lokar flexible braided dipstick? The standart one also has some clearance issues by my valve cover... so i am looking to somehow relocate it with a flexible one!?
Click to expand...

I put one on a customers Cuda years ago, works well, it just takes fluid slowly, smaller diameter tube, patience when filling is required
K

MEV said:
I tried the correct o-ring, in my case it did not work. The locking dipstick with its gromet style seal worked.

I bought that dipstick and gasket from A &A transmission.
Ive found that if the dipstick tube does not fit properly into the trans it will leak regardless of O ring.
I used the shoulder type of seal shown in the picture Mev posted. My trans was drained and I used some RV sealant and let it set up a day....No more leaks

Another thing to check when tube is out of tranny is hairline crack where the o ring seats. That is a weak spot and sometimes gets damaged when tube is really stuck and worked back and forth to get out.
You must log in or register to reply here.

Are there any PARTICULAR brands of filler tube grommet BETTER SUITED to a 1968 gas tank than others?