I will be very interested in what you come up with and decide to do.

Re-reading back through this thread on this COLD morning in TX, as to the size of tires on an 8" wheel, there were lots of middle-later '70s and later Chevy half-ton pickup trucks running around with 15x8 (factory) rally wheels on them. All with P235/75R-15 tires on them. They looked good and didn't weight that much in comparison to the 15x7 rally wheels GM had on many car models. I have no information on the backspacing, as "offset" was more important back then (at least to me AND the load on the wheel bearings!). I have found the backspacing specs on the 15x7 Z/28 (1970s era) wheels (also used on Chevelles) and it is 4.25". Yet some Buick repro factory chrome wheels only come in 4.0" backspacing, so that is another datapoint for their intermediate-sized cars, too.

Seems like there were some later '70s TransAms which came with factory 15x8 alloy wheels. But trying to put them on a similar Camaro resulted in big issues with front wheel/fender clearance. The TA fenders were contoured to clear the 15x8s and the Camaro fenders were not. With the factory 15x7 GR70-15/P225/70R-15 Z/28 application, in fact ALL Z/28 front suspensions from the first 1967s, the Z/28 was the only Camaro to wear 15" wheels from the factory. They were ALSO the only Camaros to have an aluminum spacer under the LCA bumper, to limit upward wheel travel to keep the wheel out of the fender lip when turning and hitting a bump. That was used through the 1981 model year. I discovered these things when I upgraded my '77 Type LT to '78 Z/28 take-off wheels/tires in '78.

Key thing is that in ALL of the GM situations, these were factory-equipped vehicles getting the wider wheels, so there was plenty of engineering validation behind them, at the factory level.

As to the wheel bearing issues, it was popular in the '60s to put "reversed" wheels on VWs, but it was also know that with time, the front wheel bearings would start to fail from the increased loading of the higher-offset wheels (which increased the "lever-arm" of forces taking place at the wheel/road contact area.

In more recent times, like the 1990s, Chevy had always offered a 31" optional wheel on their 4wd K-series 1/2 ton pickups/Blazers. But when customers later put larger tires on their normal 1/2 ton 2wd pickup (for that "look"), it was not uncommon to see one with one of trhe front wheels leaning wildly inward-cambered, due to front wheel hub failure. Lasted only a few model years before the parts were obviously upgraded OR the word got out not to do that.

I never did understand why Chrysler never did jump onto the 15x7 bandwagon as Ford and GM had in the later '60s. Only having the 15x6.5 wheels on normal station wagons, until the E-bodies happened in '70 with their 15x7 Rallye Wheels. Was there an engineering reason, or was there some financial "temper" in the deal? Or perhaps was there a desire to not be a "me too" follower rather than a leader? Waiting until it was considered normal to do it with the 15x7 W23-type wheels on the '77 LeBarons and later 15x7 alloys for Cordoba/Mirada cars? As some Dodge 1/2 ton pickups seems to have some wider steel wheels sneak under them?

As to what's wide enough? On the front end, other than the obvious fender lip reference, the inner tie rod ends (and rubber shields on some from the middle '60s) are the two hard-point reference points that are considered. Not just on level roads, but when turning full-lock and hitting a bump to compress the suspension to its max travel.

On the rear, other than the obvious quarter panel wheel lip, it's the sidewall/leaf spring distance that is also operative. At issue here is the lateral deflection of the rubber bushings in the rear spring front eye mounts and the rear shackle bushings. Urethane replacements can diminish that, I suspect.

One thing I learned YEARS ago, when washing the whitewalls on our '66 Newport Town Sedan, even with the stock 14x5.5 wheels and 8.55x14 tires. I didn't want to have to move the car to get all of the whitewalls scrubbed, so I got a brush that would fit over my hand. On the lh side, with the fender skirts removed, ample room to scrub the upper half of the tires, but on the rh side, there was slight interference with the inner wheel house's factory undercoat. Not sure exactly why, but it was that way from the factory. Other Chryslers seem to be that way, too, by observation. Maybe not so much, but still that way.

Now, I like a wider wheel/tire look as much as anybody, but I prefer using OEM-type sides of up to 7" riim widths and OEM backspacing. That's just me. When we got a set of (Uniroyal-built) Golden Sonic whitewalls in H78-14 size, on the factory 14x5.5" steel wheels, they had a wider tread width than other similar tires. I measured them to be an actual 70-series aspect ratio AND noticed that there was strong evidence that their sidewall's widest point had also been touching the factory rubber shields on the outer tie-rod ends. Not enough to tear the shields off, but still contact when turning (obviously at the higher highway speeds we could drive back then, which the car also enjoyed doing). Otherwise, about 3/8" clearance. Didn't think to look at the rear tires inner sidewalls, back then. But tires back then, especially the BFG Silvertown belteds which came later, had wide "curb protection" rub-areas on their (inner and outer) sidewalls, which kind of over-stated the tire's sidewall width a bit. Just the way many tires were back then. That extra bit of sidewall structure would keep the whitewall from becoming "scrubbed" wider when the wheel would contact a curb during parallel parking maneuvers.

I suspect the 15x8 Super Coupe wheels existed to fit the needs of the classes that car would race in, more than anything else. An easy upgrade from the 15x7 Magnum GT wheels, for little extra real cost. Not unlike a 5L V-8 getting a 780cfm Holley as factory equipment, in order to race in classes when the factory carb had to be used.

We also know that the cars which Chrysler expected to be used for drag racing were designed with unobstructed rear wheel spaces. To accomodate the typical wheel/tire sizes needed for that type of competition. A-, E-, and some later B-body cars, typically. Cars with full-open rear wheel openings are way to seek to impart "power", in many cases. As cars with rear fender skirts can be more "luxury" and "sleek" in their styling orientations. FWIW

Thanks for your time. Just some of my observations and thoughts from growing up in those earlier times and watching it all unfold in real time. 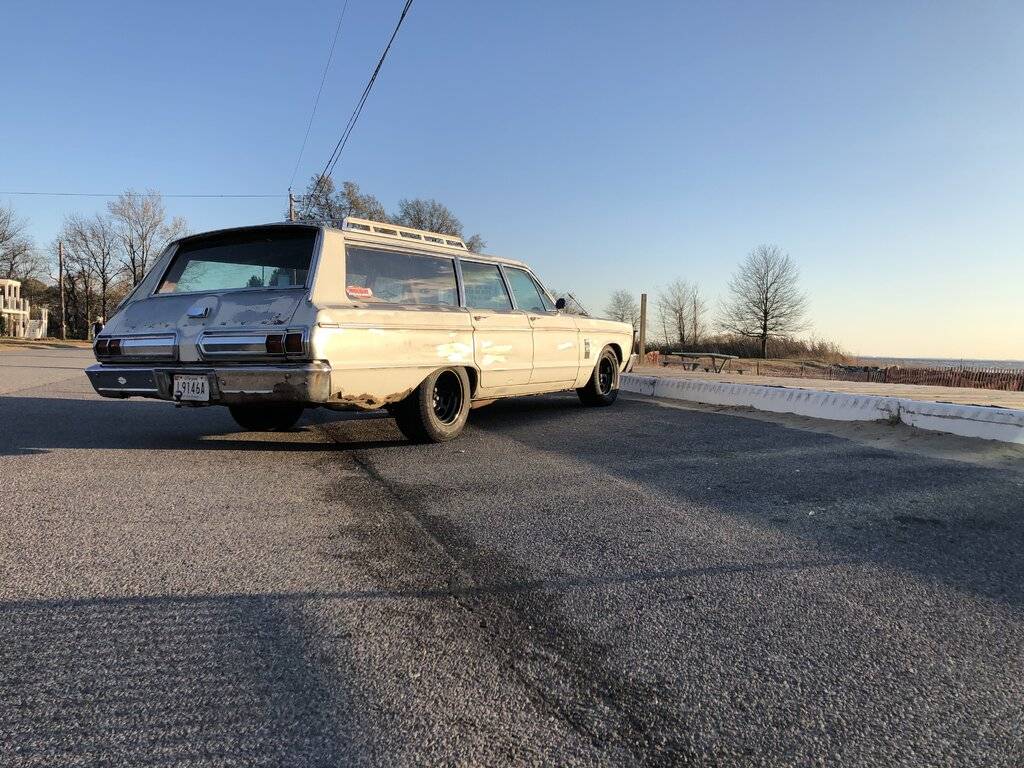 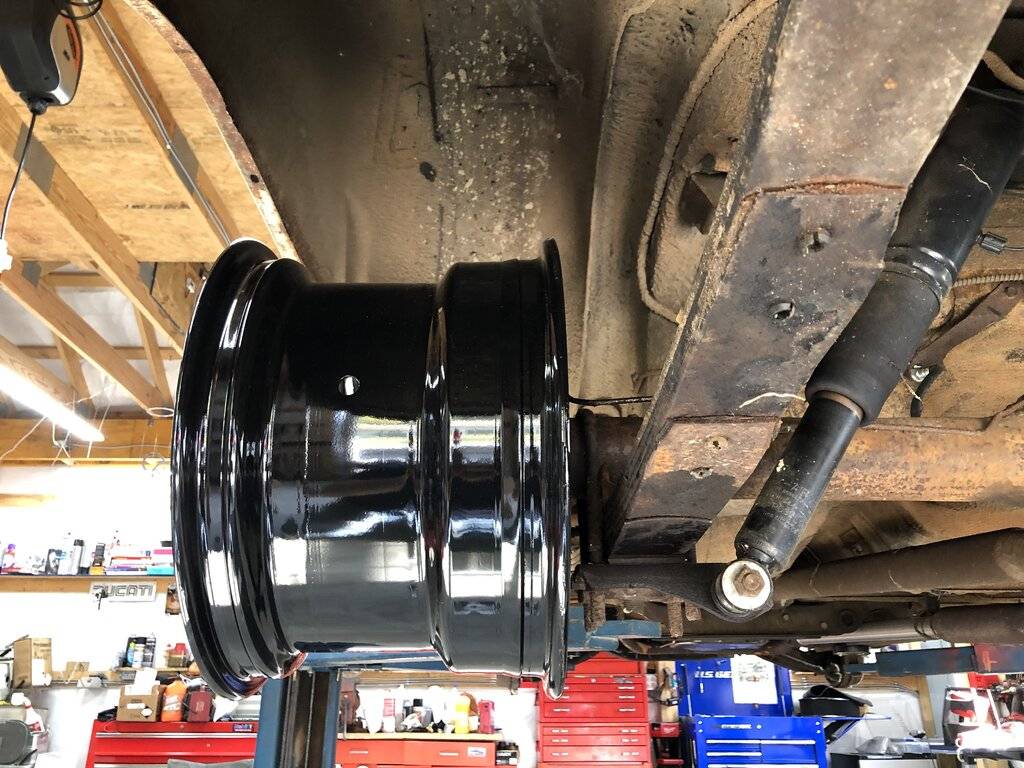 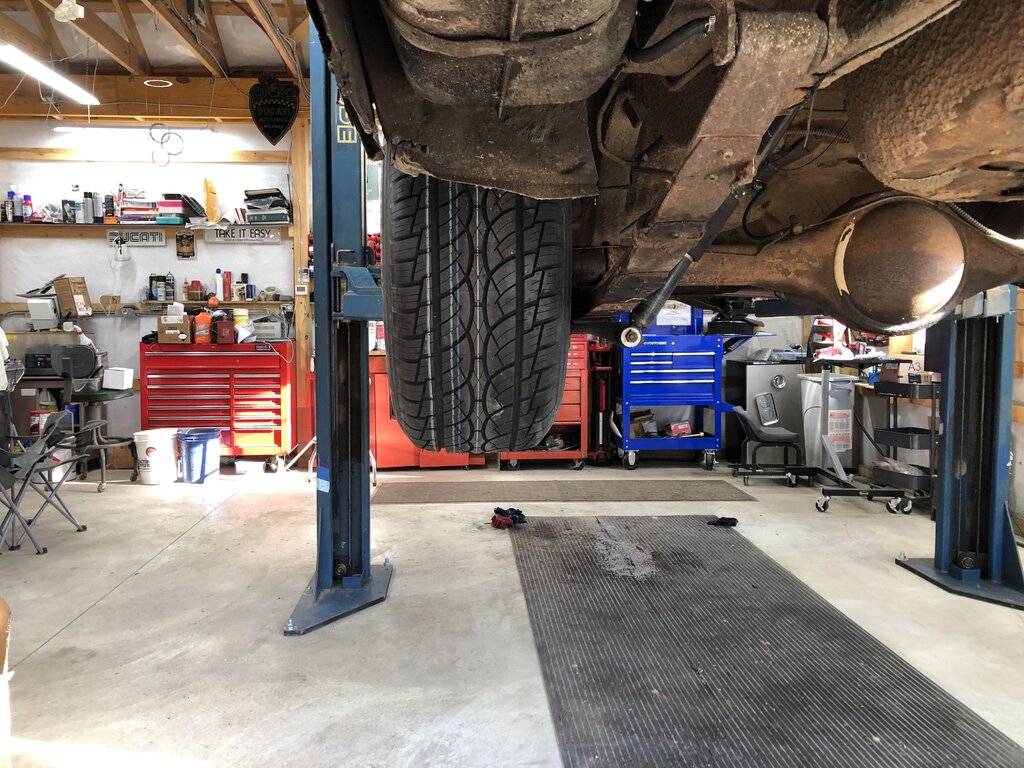 I used OEM 7.5 inch wide steel wheels from a Diplomat with 235x15 tires on my 67 Polara. Fills the Wheel opening nicely While maintaining a OEM appearance. 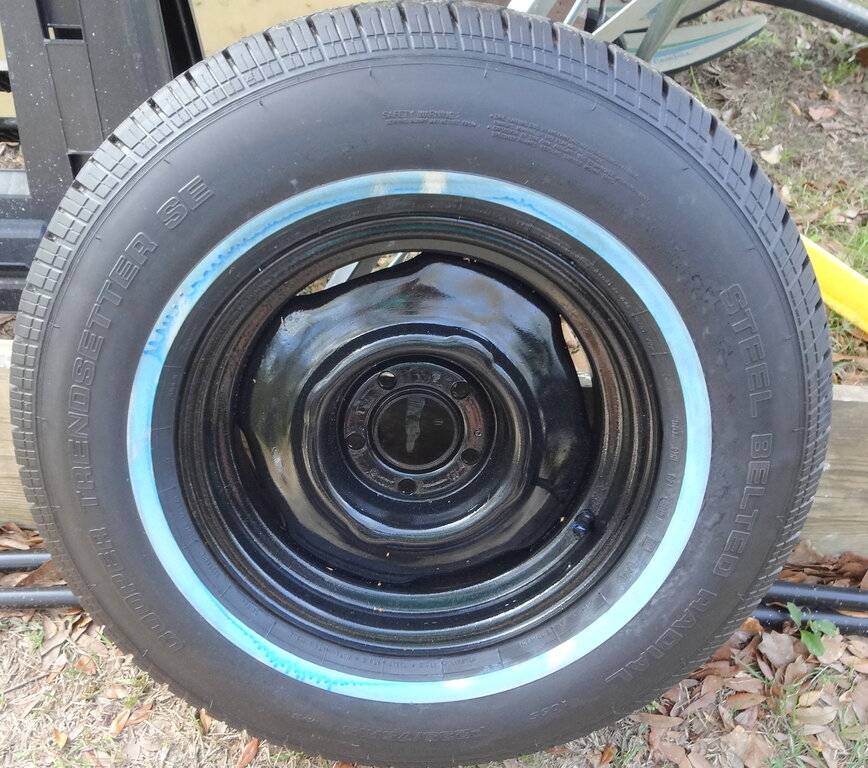 My speedo is also dead on.

Sorry, no pics cuz its up on jack stands but my fronts are 17x8 and tires are 255/55/17 with 4" backspace (+12mm offset). Its close but no rubbing at all. Even during driving and cornering. I am confident that my changes from stock will not lead to serious highway failures but certainly I think the bearings, spindles, and linkage were not designed for this width and likely will result in early maintenance. But my yearly mileage is low enough that "early" is a ways off.

I decided to return to this post 8 months later, as I'm getting close to ordering wheels (got caught up in some A-body madness). This is exactly the picture I was looking for--looks great!! THANK YOU!!!
Last edited: Apr 30, 2021

bluefury361 said:
I used OEM 7.5 inch wide steel wheels from a Diplomat with 235x15 tires on my 67 Polara. Fills the Wheel opening nicely While maintaining a OEM appearance.
View attachment 438967
Click to expand...

I'm running almost this exact combo--of which I posted a picture and explained that I didn't like it. I'm happy that you're happy with the choices that you've made.
You must log in or register to reply here.