Hello, I have a 67 t&c wagon that I just picked up. Previous owner removed the booster. I am planning on a disk brake swap in the near future. What would be y'alls recommendation on what booster buy?

I assume that you're saying that the car originally had drums. But I wanted to clarify in case you are considering upgrading away from an original (hard to service) Budd disc system and moving to the much easier to deal with later model C body disc system...

Regardless the best Booster in all cases is the Bendix dual diaphragm disc booster. Unfortunately they are hard to find, but they are out there so keep looking.
W

Ross Wooldridge said:
I assume that you're saying that the car originally had drums. But I wanted to clarify in case you are considering upgrading away from an original (hard to service) Budd disc system and moving to the much easier to deal with later model C body disc system...

Regardless the best Booster in all cases is the Bendix dual diaphragm disc booster. Unfortunately they are hard to find, but they are out there so keep looking.
Click to expand...

Correct, it is currently 4 wheel drum. I wonder if something from the aftermarket would be easily adapted?

Not that I know of. However, there are discussions about the use of the reproduction B Body Bendix Disc Booster currently available.

Search here on the forum for info.

I installed one of the repop booster kits in a friend's Challenger about a year ago, and I still haven't got the bugs sorted out yet. We started out with an absolutely terrible mushy brake pedal and have improved things up to a somewhat soft, but effective brake pedal. 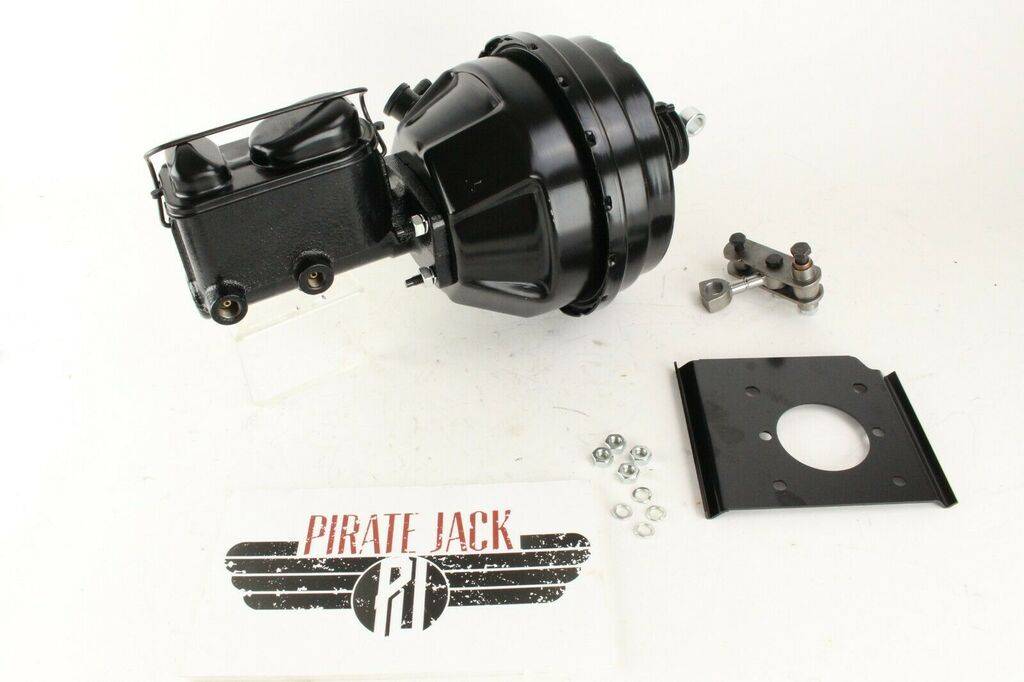 Looking at it in person, the unit from Pirate Jacks appears to have a nice build quality, it's made in Taiwan and not China, and there's actually a manufacturer's logo on the box.

After bleeding the brakes a bunch of times, then buying a pressure bleeder to bleed again, then switching to conventional fluid from silicone out of desperation, I still had a lousy pedal. I finally figured out that much of the problem was a poorly designed master cylinder. Installing a new Raybestos master made a big improvement, but it's still not right when compared to my friend's other car with factory power brakes. 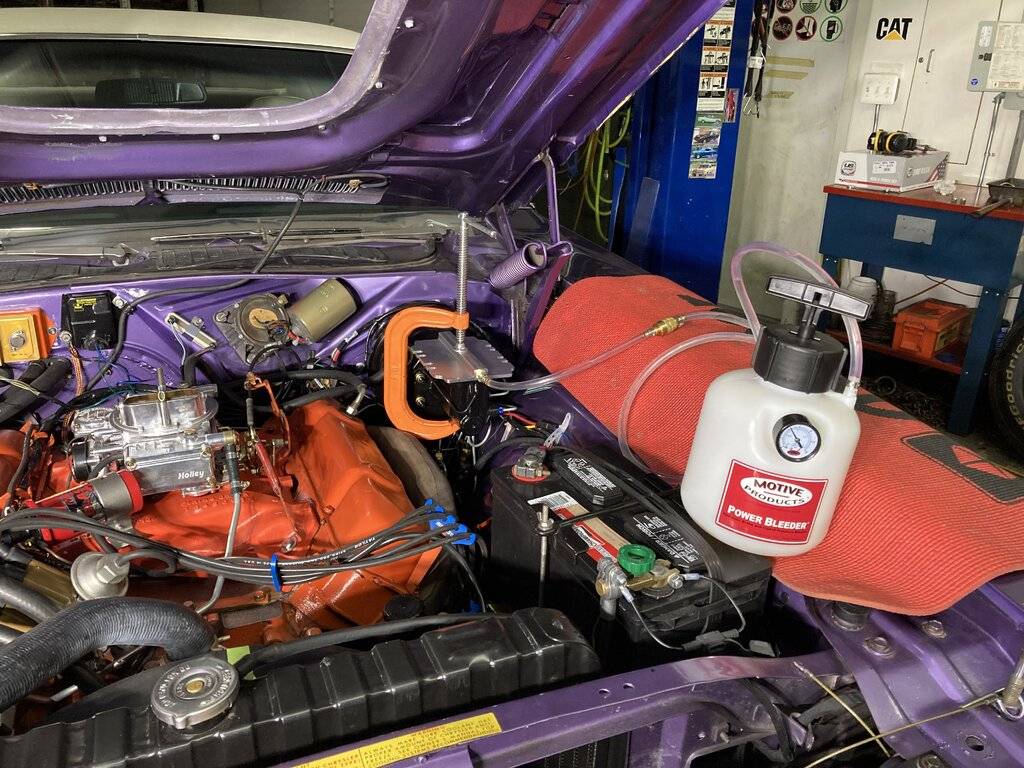 Next up is to change the booster push rod adjustment as far as I can go to see if that helps any, though I have a feeling that I'm almost at the end of the travel now.

I can't condemn the booster yet, but there's a possibility that it's not designed correctly.

It takes a bunch of modifications to make the B/E booster fit in a C body. The pedal push rod is too short for the C and needs to be cut and extended. The booster to firewall mounting stud pattern is smaller on the B/E booster, so new holes would have to be drilled in the firewall and pedal brackets under the dash, and who knows if the studs will even fall in areas where they will hit the brackets.

You're better off finding a C body booster and having it rebuilt. You might want to try CTC's Auto Ranch or French Lake Auto Parts. It seems likely that one of them would have one, unless they sold them all off to be changed into "Hemi Boosters".

If I could bogart your thread for a Sec. I’m going to be removing my booster for some house keeping.. my question is! Can It withstand the heat of powder coating? Or should I just paint it?
Last edited: Nov 22, 2021

75LandYacht said:
If I could bogart your thread for a Sec. I’m going to be removing my booster for some house keeping.. my question is! Can It withstand the heat of powder coating? Or should I just paint it?
Click to expand...

I don't think that I would put it in an oven for powdercoating. Paint should be fine. If you wanted to go the extra mile, you could use a 2K paint from Eastwood that would be more resistant to brake fluid.

Once it's out of the car, I'd send it out for a rebuild unless it's already been done.

There are some other booster options if you can't find a 1966-1970 Bendix, and don't want to mess with the repops.

First is the Midland-Ross dual diaphragm booster used in 1971-73 Imperials and wagons. 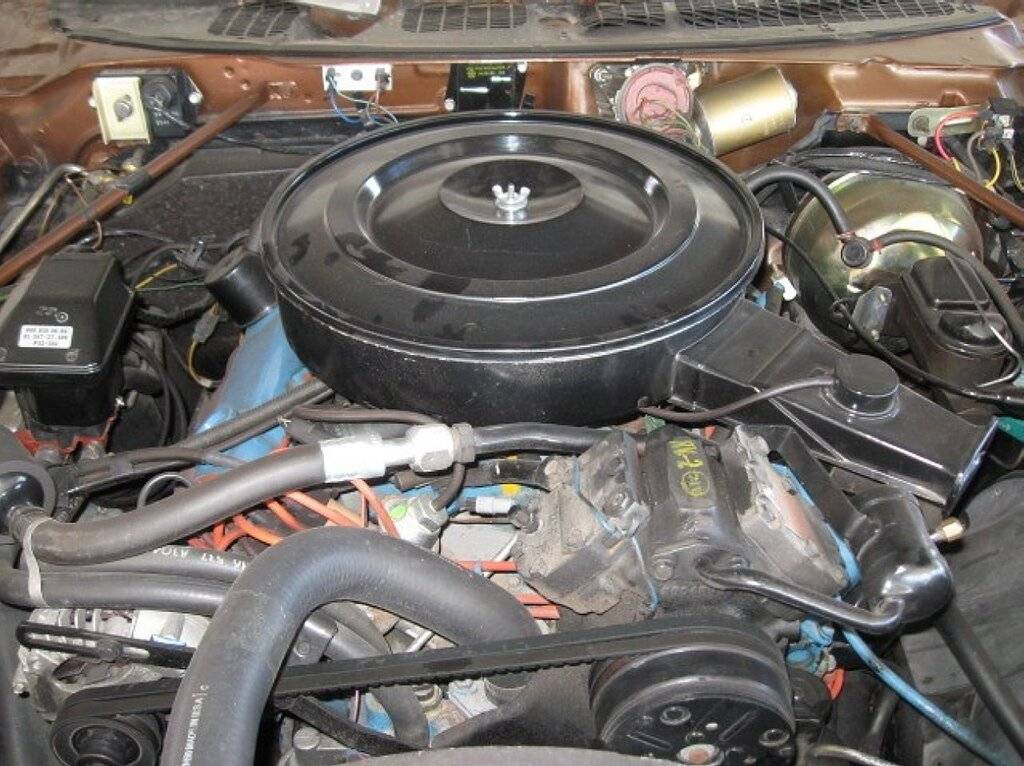 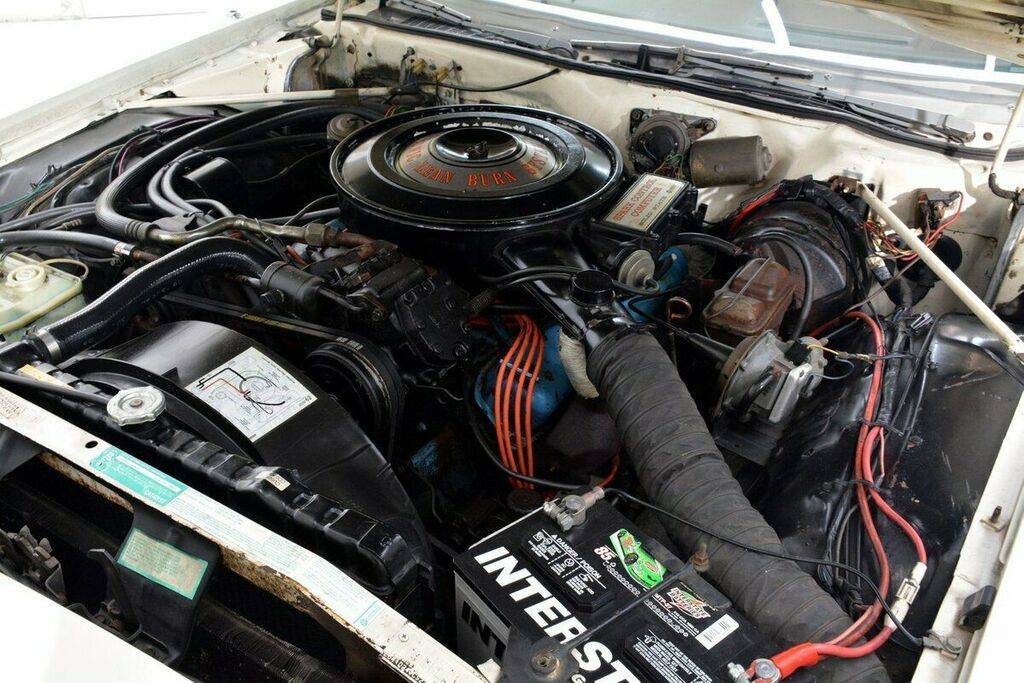 There's also a dual diaphragm booster used on the Dodge vans, probably a Bendix, that might be worth investigating. There are two versions. One for a 4 bolt master cylinder, and one for a 2 bolt master. I'm not sure if you can turn the pedal rod 90 degrees to make it fit a car, or if it's fixed in that position. I haven't compared mounting stud spacing yet either. 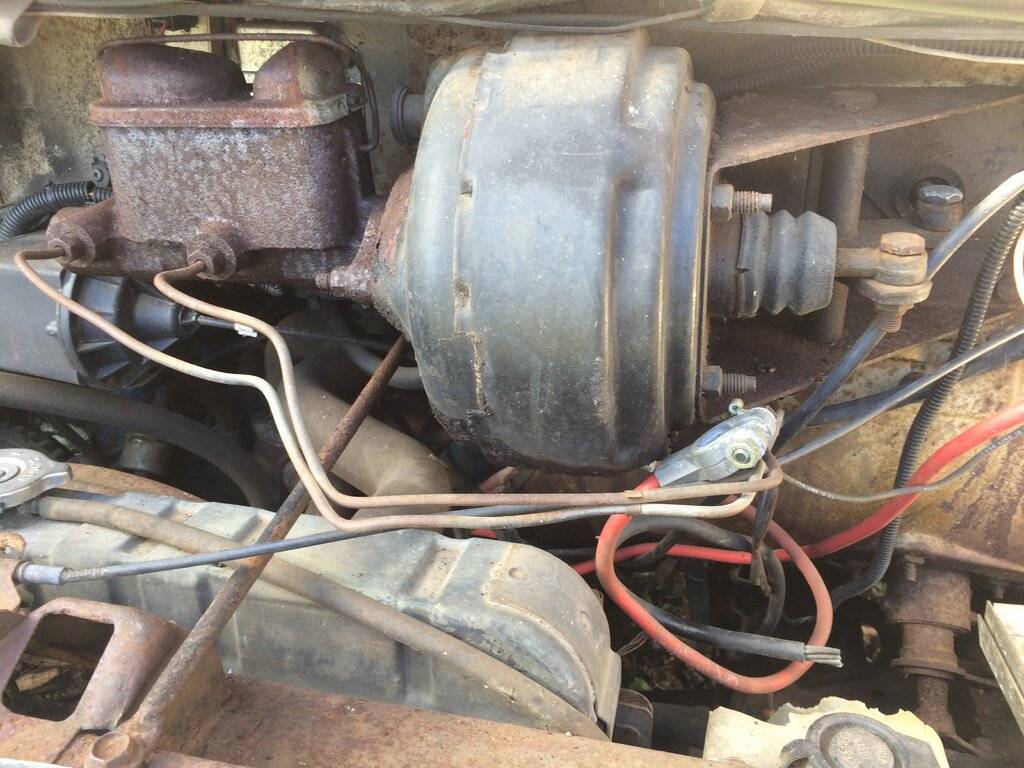 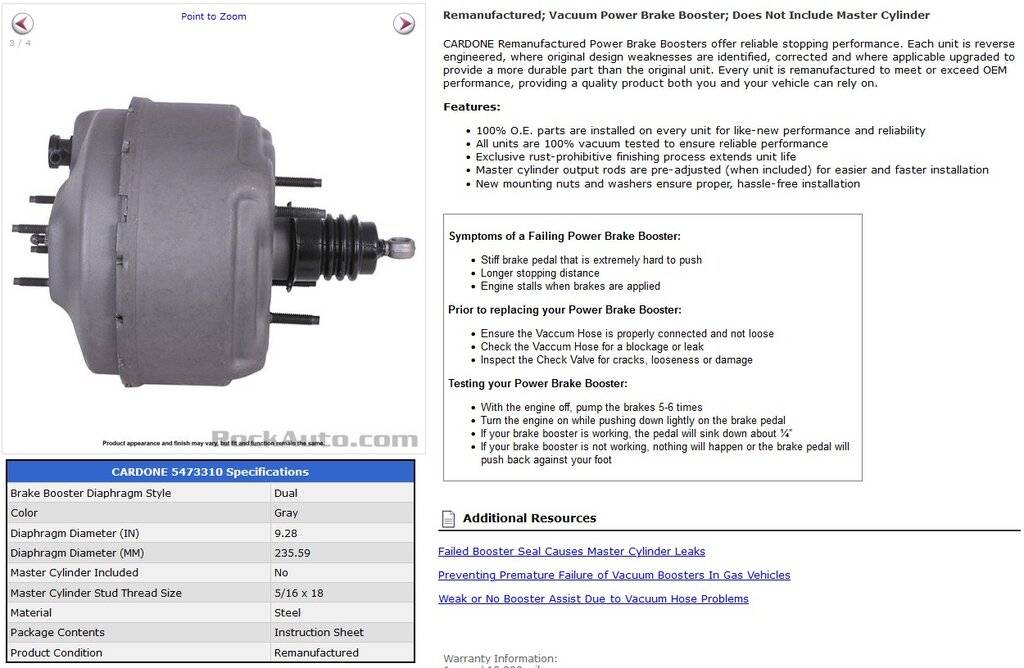 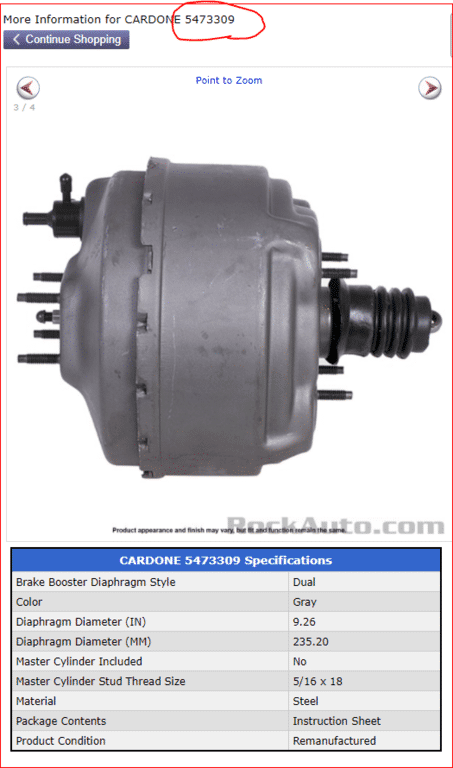 The Rock Auto photos are for reference only. They don't stock them anymore.

Yes, the pickup booster is to large. It will interfere with your shift linkage.

Has anyone changed over to a hydoboost set up?
J

Desert Valley Auto Parts has a booster from a 72 model c-body, $125. Should fit earlier c-bodies. One fit my 66. Try connecting it to the vacuum hose and see if it holds vacuum before installing. It will probably need rebuilding at booster dewey's shop. Easy to find him online. This is the booster that goes with the early 70's disc brake swap. You will need the spindles and caliper brackets too. The prop valve is the same as late 60's b-bodies so they are available. Rock auto has rotors, calipers and master cylinders. I used copper nickel brake line for the swap, very easy to use. Can almost bend it by hand. Check out Amazon for it along with the tubing nuts. They also have the coiled spring that goes around the tubing.

wyldebill said:
Has anyone changed over to a hydoboost set up?
Click to expand...

Not that I'm aware of in the C body world.

I'm sure it's been done on some projects where space wouldn't allow a vacuum booster, and it's even more likely to have been done on many diesel swaps.

Also, I took some measurements of the van booster, and all the critical dimensions are either the same or very close to the B/E body boosters, so they don't help the situation any.

This car being parted has the booster you need.

Jeff
You must log in or register to reply here.

Will a Generic Dorman check valve work in my Midland-Ross booster?

B and C body leaf springs