My girlfriend and I did some serious Mopar buying trips.
Summer trips in my 1967 Dodge A-100 Van. 6 cyl, 3 speed
on the column. 2 bucket seats. It was an old Mountain Bell van.
No A/C. Short wheel base. It did have an AM radio.

We camped out about 95% of the time. We had a tent so we could camp out.
Lots of National Forests, Wilderness and open spaces in the west so that was easy.
We cooked on a fire with a small grille using the local woodthat was everywhere.
I live in Arizona so we are used to this type of camping. We went days on end with
no shower and often there were streams nearby for bathing. We did eat at local non-
franchised places too and had some amazing meals. Sometimes we camped behind
buildings in small towns, cornfields, large city parks, etc.
We mostly were able to keep clean using streams and the water we had
with us. We rarely spent any time in motels. We did eat at local non-franchise
restaurants too.

The strategy was to drive blind and never contact any dealership in
advance. I had a USA Road Atlas for guidance. Show up at a Mopar dealer
and ask the parts manager if they had any obsolete parts they wanted
to get rid of. If so, we would look at what they had and pile up what we
wanted and then agree to a price. Once we had a huge pile of parts we had boxed
up and I figured I'd pay around $2,000.00 for all of it. The guy says what was it worth?
I said what do you think? (I'm sure as hell not going to say what I thought it was worth)
He said 300.00 I said OK and held my tongue until later when we walked out of the place.

I was paying about 5 - 10 cents on the dollar for parts and sometimes less
as often they had written the stuff off and had no idea what they paid for it.

I had a tape gun and labels and we would box it up there so that the parts
arrived in one piece. Often, we would have to gather boxes all over town in order
to get it done. Then when we got home, I would send them the $ and they would
ship it.

If they didn't have any parts I would lay the map on the counter and ask if any
surrounding dealers and towns might have anything. Then off we went to the next
dealership. Along the way we stayed with friends and took a break from endless driving.
It was always great to go someplace with no real plan other than to clean out
Mopar dealerships of their obsolete parts.

I also collect old patent remedies that I got out of old drugstores starting from 1975
to 1994. Cough medicine, tooth powder, condoms, baby formulas, etc. I have cases of the stuff
on display. Items date from the early 1930's to the early 1960's all new and never opened.
So, while we were buying Mopar I hit the old pharmacies too.

So, my girlfriend kept a journal of our trips and I did add to it on occasion. Recently she gave it to me
so now I have a chance to look over this amazing document of our trips.

Some of the highlights were:

Spending a night in a house across the street from a dealership w/o electricity
and inventorying all the parts they had in there using a Coleman lamp.

Seeing the Grateful Dead in Eugene Oregon then camping in the mountains.

Eating in a Diner (Joes' Spic and Span) in UT where they slid the plates of food
down the counter in front of you.

Getting to see small towns they we would never have spent any time visiting except
we were there buying parts and got to see some incredible places, eateries and campsites.
And of course, the people were mostly great.

Some of the entries from the diary my girlfriend wrote are enclosed (I did at times chime in there too). The world's worst motel room
is over the top with "we could hear our neighbors yawn". 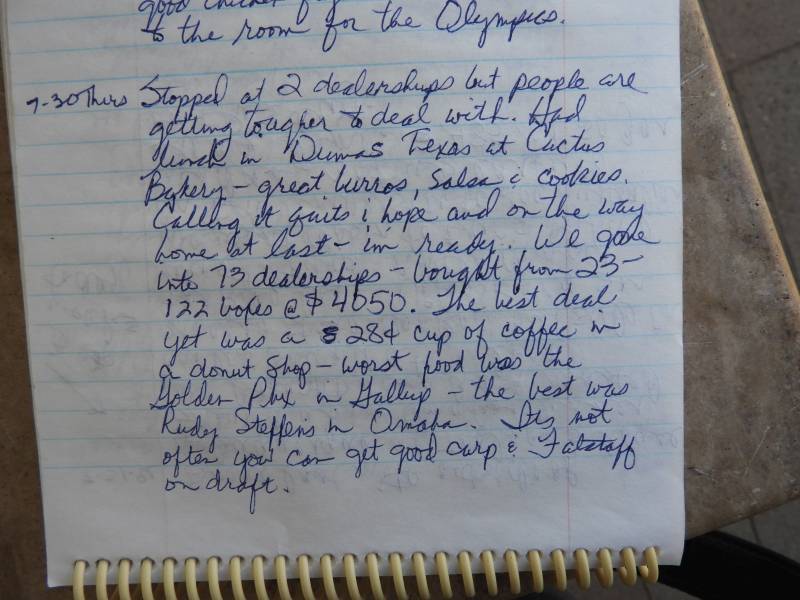 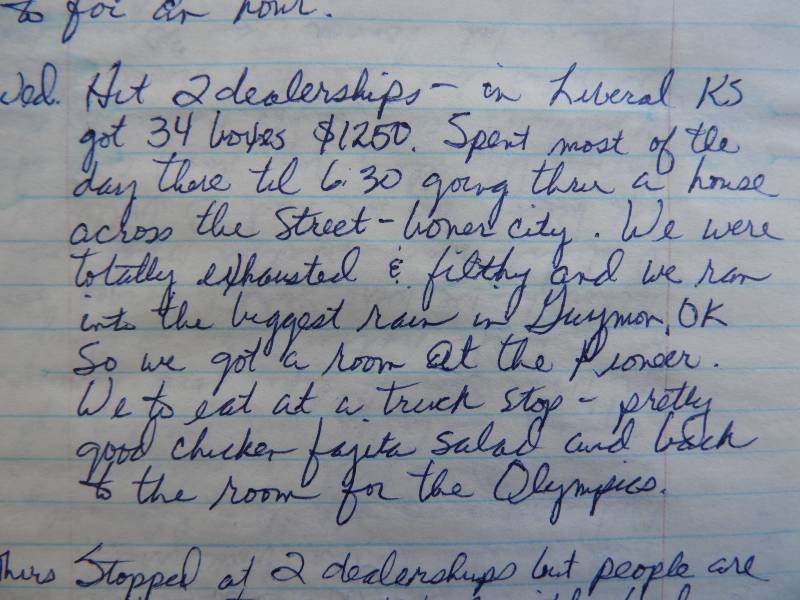 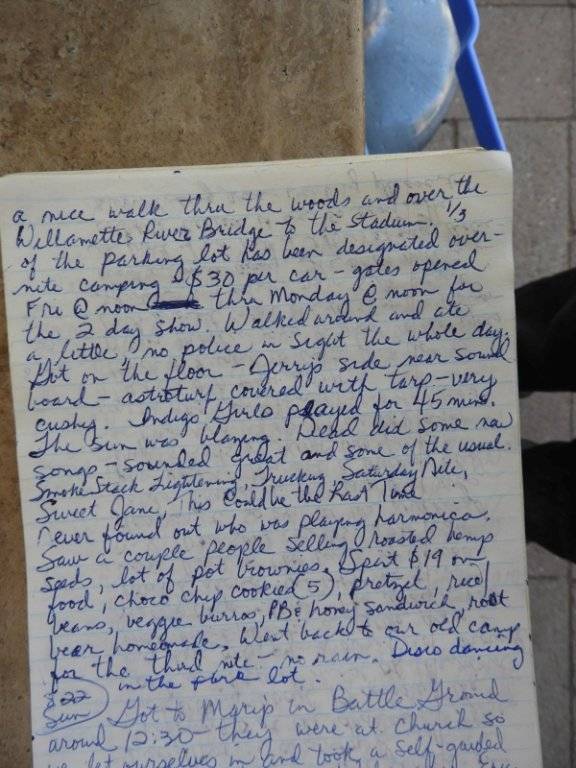 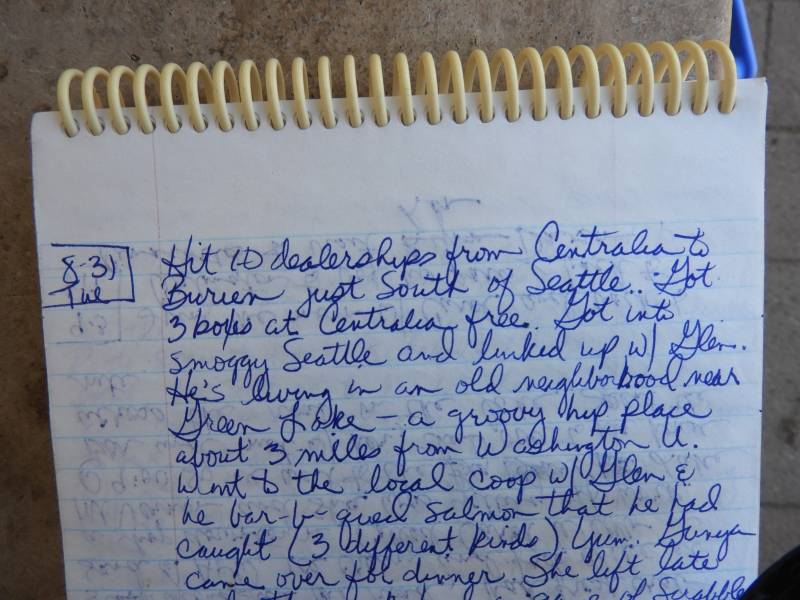 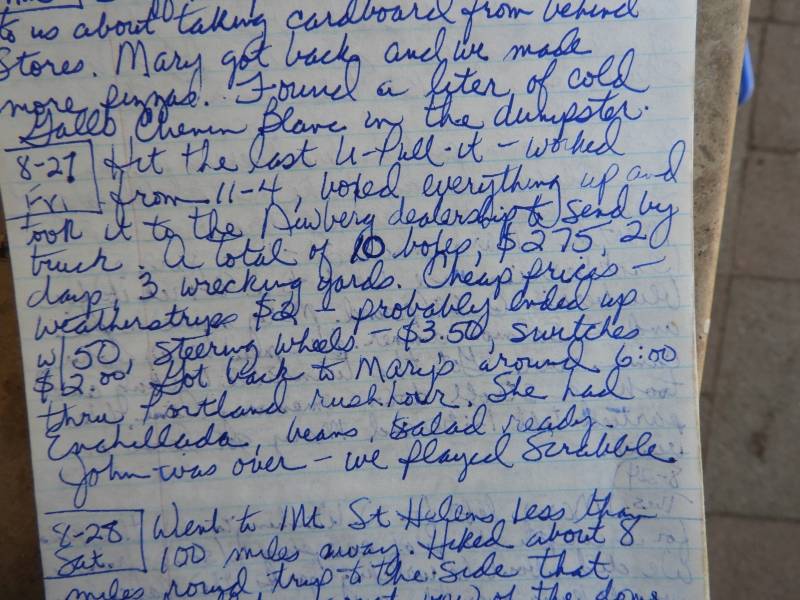 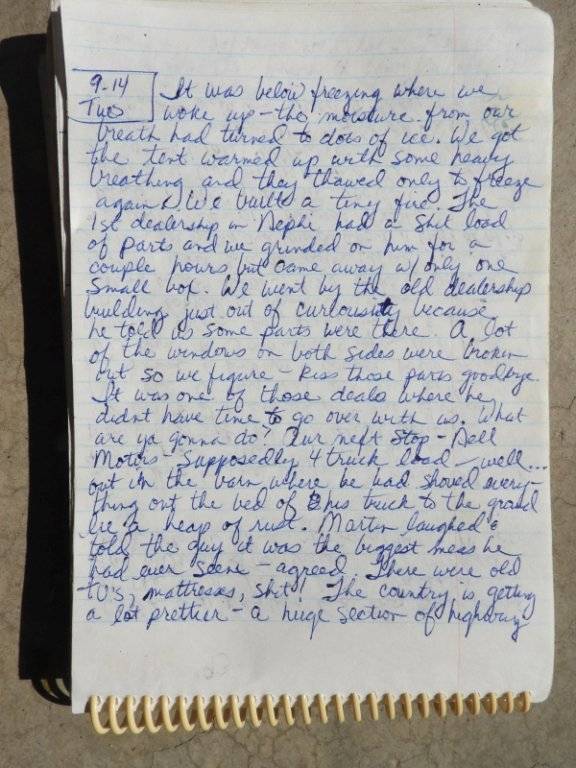 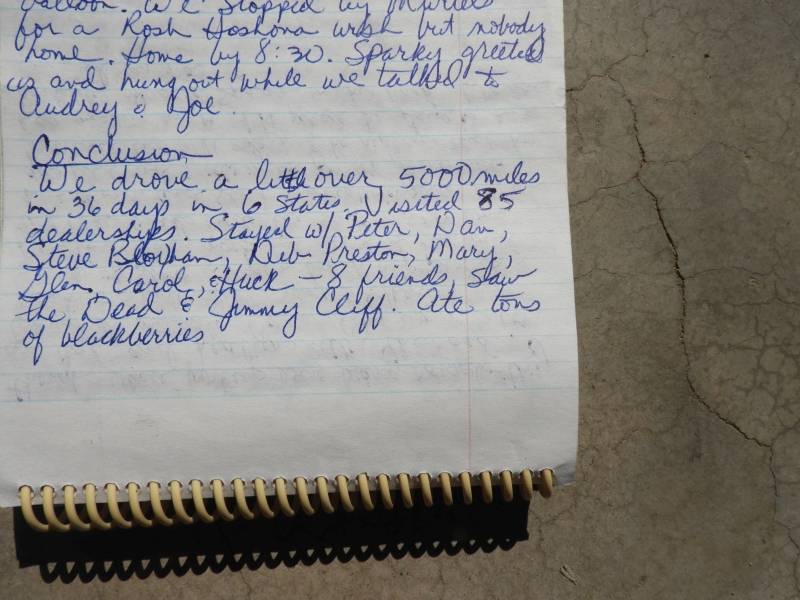 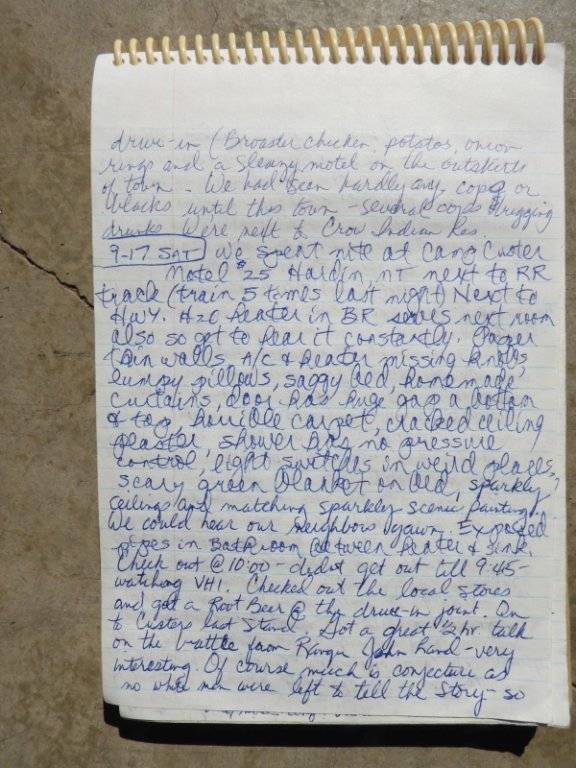 Great story...I had a question for you but your inbox is full

What an amazing experience that must have been, thanks for sharing. She still with you?

That's such a kick *** story, Marty. I'm always amazed of the adventures some people have had in their lives. Thank you for sharing. I always dig your humor and tales from the road!

Very interesting story, thanks for sharing! I'd totally enjoy traveling in that manner, and hope to do so someday.

I would have been right at home doing what you did. Great story.

Great thinking back then @marty mopar . I scoured the parts inventory of our Dealerships up here looking for any Mopar Performance stuff sitting on shelves. Made quite a few scores but now it has been picked over and its guys like you we turn to for the obsolete stuff.

Keep up the good work!

cleaned out my inbox

most of what is in wrecking yards are just tired and the owners do not want to fix them, some of them look new.

Also been ordering parts from the local Dodge dealer forever and I pay 10% over dealer cost and no tax PLUS they
deliver it to my house. The manager has old Mopars so we are good friends.

Once every few years he sends me a list of what Chrysler is getting rid of. Insane stupid cheap prices.

The last on was all Viper and Prowler parts. All arranged not by part # but by price!

The 1st item was a Viper hood and the last page were fasteners.

I got this for $4.00 1997 Prowler instrument cluster wiring harness that included all the relays and fuses

the shipping and handling would be more than that. at any rate I bought a ton of stuff off that list. The other odd thing is that the list goes to the part manager.
Now what the hell is he going to do with it? The dealership is not going to load up on stuff that Chrysler is having a fire sale on. They move all of their inventory
in 3 months. That is what he told me. It is all late model fast moving parts (mechanical). Is he going to hand it out to some guy who is buying an oil filter?
But hey when I got a list I went thru it with a fine toothed comb to see what I could find.

about 30 years ago at another local dealership I ordered so much crap that the guys who had to sort through a mountain of parts
were not too amused. Armrests for .70 etc. Their fault they gave me the list.

I got a crapload of parts books in the 1980s and 1990s for free as they got 4 copies a year and they saved al of them for me. Sometimes they never even
opened them to put in the binder.

If I PM you part numbers would you look to see if you have it?

let me know what year/model you have

Loved this story.
Should be made into a movie!

I'm very late finding this - great story, adventure of a lifetime I'd imagine.

Wow! Awesome adventures that turned into a life's worth of income!

I've seen some pictures but had no idea how fun it must have been to collect all of this!

Love dealing with Marty, last time in Mesa at the beginning of the year only found a starter relay.

One more addition to this story:

Total for the trip according to my diary:

Bought from 23 of them

Worst food was the Golden Phoenix in Gallup

Best was Rudy Steffens in Omaha (carp and Falstaff on tap)
You must log in or register to reply here.