Please bear with my ignorance. It seems to be one of the few things in life that I have a lot of. I appreciate any assistance provided. Thank you.

I've been working through some ignition related issues on my 1969 Dodge Monaco with a 383 4 Barrel . The only meaningful alterations to the car have been the addition of a Holley 670 Street Avenger Carburetor and 1/2 inch ported spacer underneath it.

I purchased and installed a new set of plug wires from Lectric which are 7 mm wires. The wire for the coil was too short so I'm using a prior 8 mm wire for that. Also, I installed a new rotor, and new distributor cap. I've checked the other plugs and they seem fine.

I fear that somewhere along the way I rotated the distributor too far One Direction and now the car, if it starts, doesn't want to Rev without making some troubling sounds and eventually it stalls. Also, whenever I tighten down the bolt that holds the distributor in place the RPMs drop from the level prior to my tightening the bolt and I can't figure out why that's happening and how to overcome it.

For it seems like I can dial the distributor into a place where the engine run smoother until I go to tighten that Bolt.

Without a timing light is there a method for knowing the correct or a sufficient distributor loc to get along with without having to pull the number one plug and look for top dead center for the piston Etc. I don't have the wherewithal to do that, but I can get the car off the mountain and down into a shop if I can drive it that far with a sufficient distributor orientation. At least that's my belief. And that could be faulty.

Next, buy a timing light. If you don't want to spend a lot on a good one (better if you did), buy a $30 one from Harbor Freight. Bet you can get it cheaper with a coupon. Yea, you can time it "by ear" or use a vacuum gauge etc. as a bunch of guys are going to chime in and tell you... But you need to get some sort of base line and it's just freaking easier...

If nothing else, figure out what the timing is before you tighten the bolt and then after. Adjust the distributor accordingly so when it's tightened, it's in the right place.
C

Harbor Freight! Guess that's the benefit of having a multitude of counselors. I forgot the obvious as far as where to get a timing light during this economic squeeze we're in. Thank you for your guidance.

Carl Severa said:
Harbor Freight! Guess that's the benefit of having a multitude of counselors. I forgot the obvious as far as where to get a timing light during this economic squeeze we're in. Thank you for your guidance.
Click to expand...

Amazon is still delivering too.

I agree get a timing light AND vacuum gauge.

Regardless here is a field repair you can do..
Pull the left valvecover and find TDC at cylinder #1.
Then set the timing mark at the balancer at 10 degrees BTC. With the cap off the distributor have the highest point of the cam (if running points have points OPEN) or have the tab of the of reluctor ring RIGHT AT PICK UP (electronic ignition).
Button her up and way you go.
You KNOW THAT TIMING IS NOW AT 10 DEGREES BTC,LOL!!

10 degrees BTC initial timing with 18-ish inches of vacuum is a good baseline until you can get her to a shop for finer tuning.
Hopes this helps!
Last edited: Apr 2, 2020
4

cbarge said:
Regardless here is a field repair you can do..
Pull the left valvecover and find TDC at cylinder #1.
Then set the timing mark at the balancer at 10 degrees BTC. Hopes this helps!
Click to expand...

can you complete the idea of removing the valve cover and finding #1 TDC? How is this done?
4

Do you have an aftermarket distributor? Something is really wrong if the timing changes when tightening the hold down clamp.

did you clean or replace the #6 plug? It won’t just magically clean itself after the cap problem you had and the plug very wet.

If you can please post some good pictures of your engine bay with attention paid to the distributor , crank pulley and carburetor areas. A picture is worth a thousand words! It helps us to help you.

413 said:
can you complete the idea of removing the valve cover and finding #1 TDC? How is this done?
Click to expand...

Disconnect coil wire.
Mark the timing mark on balancer so it can be easily visible
Remove driver side valve cover (5 --7/16" bolts)
Remove cylinder #1 spark plug
You can either A) turn engine over by hand WHICH IS WHAT I PREFER or B) have a helper twist the key short spurts.
Turn engine over slowly until both valves on #1 are closed AND piston is all the way UP USING A SCREWDRIVER PUT IN HOLE TO FEEL WHERE PISTON IS and the timing mark is on "0" or ZERO
Check under cap that distibutor is pointing at #1
Then advance the balancer to 10 degrees BTC and index distributor as mentioned in my last post.
You know that you have 10 degrees BTC!!
Snug down distributor DO NOT OVERTIGHTEN!!
Re-install valve cover,spark plug,cap and coil wire.
I guarantee she will fire up!!
Hope this helps
C

Thank you for the outpouring of advice and guidance.

I've got the vehicle where it'll idle now. I put the initial distributor cap back on even though the metal for where plug wire 6 goes into is chard. I cleaned it up somewhat. This cap just seems to work better.

I tinkered with the location of distributor starting the car and seeing how it ran then turning it off and making further adjustments. The vacuum thing on the right side of the distributor when facing it was up against the radiator hose, so I figured it can't and shouldnt go any farther clockwise because of the hose in the way ( I know, I'm brilliant deduction!). So, I began backing It Off. I also open up the air fuel mixture screws a bit more.

The car idles now and moves under its own power both in reverse and forward. But it is challenged. I don't want to push my luck here.

I have previously pulled all plugs and cleaned them and checked Gaps but will repeat this labor.

I will try to upload some pictures sometime today. My efforts at doing that to this point have failed.

Again, thank you for the direction. I need some time to digest and work through what's been suggested to me.
C

Think I should get a second new distributor cap. 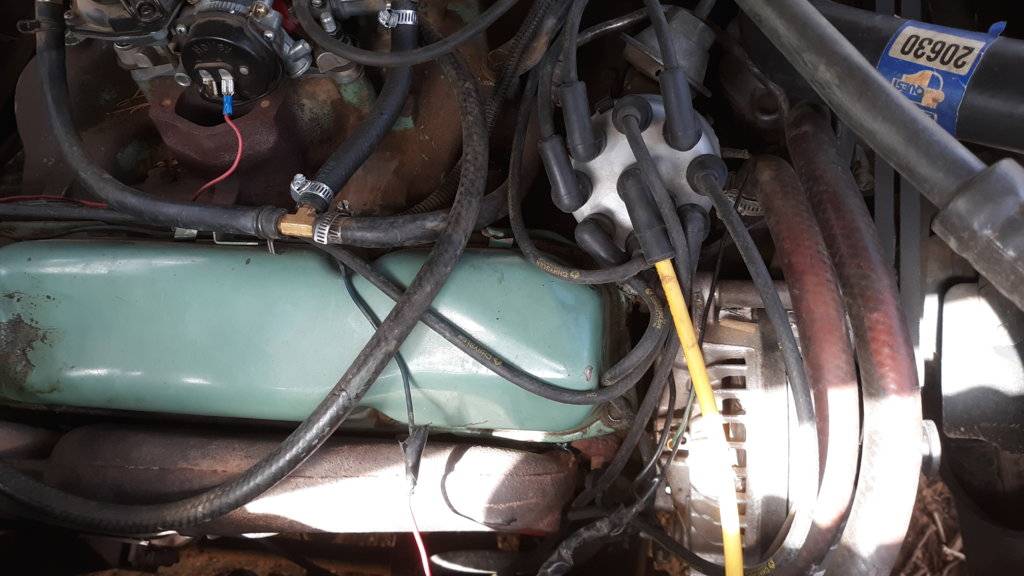 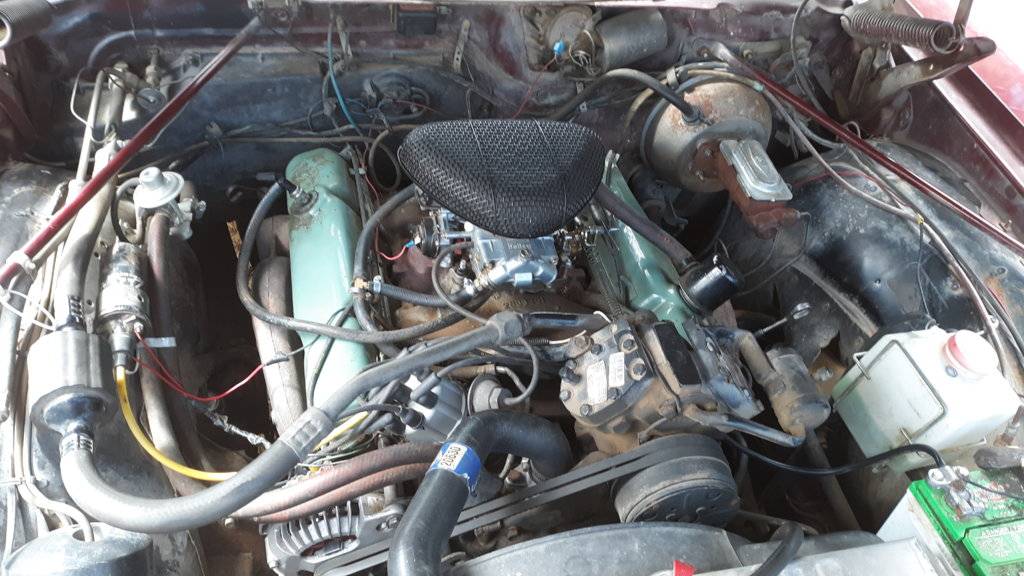 I think at least cyl1 wire is fine.
Hard to tell if the next counter clockwise is 8.
Based on the position of your vacuum advance. You may be a little advanced. I tried to take a picture of the same angle. Mine is set at 7-1/2 advance. Some variation may apply between distributors. My finger is on number one.
The thing people forget to do is mark their current distributor location before removing or messing around too much. 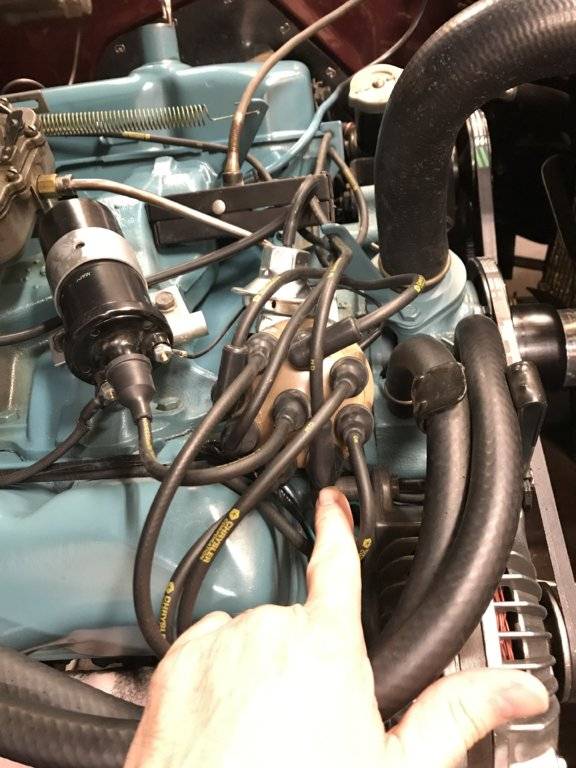 As of late yesterday afternoon, the Monaco was running better. I replaced the #6 plug and retarded the distributor slightly and dialed back the air fuel mix screws a bit.

Shortly after starting the car the engine revved hard on it's own briefly and was smooth. This was encouraging.

One of you commented above that it doesn't seem like all this should be related to the factors provided so far. I tried to remember everything that has taken place recently and I remembered that I added some 93 octane fuel with octane booster additive just before some of these phenomenon began to plague the car.

My theory as to what happened with the number 6 plug wire leading to the fouled plug is that the prior 8 mm wires that I had were custom measured and cut and put together, and I think one of those somehow was not done correctly which led to the heat issue on the number 6 wire.

So I'm separating out the total number of phenomenon that I'm trying to sort through into 2 categories now. The one fuel-related and the other the faulty wire/ plug / distributor cap.

I thought I'd post a different type of picture. Something more then of the car. This is my backyard. 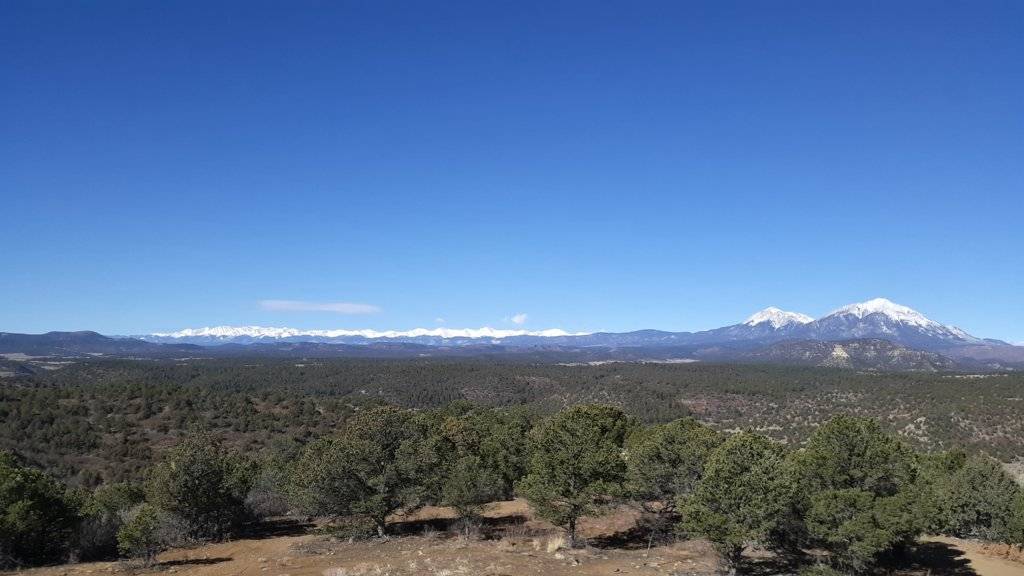 Well, I drove the Dodge to the post office and back today. Didn't have to make any adjustments although I do need to get the thing timed. Looks like this issue is at a closure for now and thanks to everybody for your input and your guidance and help. Carl
You must log in or register to reply here.

68 Newport, can I tighten the steering?