60 Hours that is,
On Tuesday 11/10 at 9:30 I see the post for the convertible and make the call, literally.
The car was still available and was highway worthy so I contact a friend who had a friend that was interested in buying a 69 CHP car, by 2:30 we had confirmation the car was sold. I call DVAP back and let them know I was interested and would be driving in from LA tomorrow, I was told the owner would not be there but would be on Thursday, not an issue as we wouldn't be there till just after closing.

That night I prep the car, clean out my stuff and collect stuff that needed to go with the car and stuff we agreed to include in the deal. 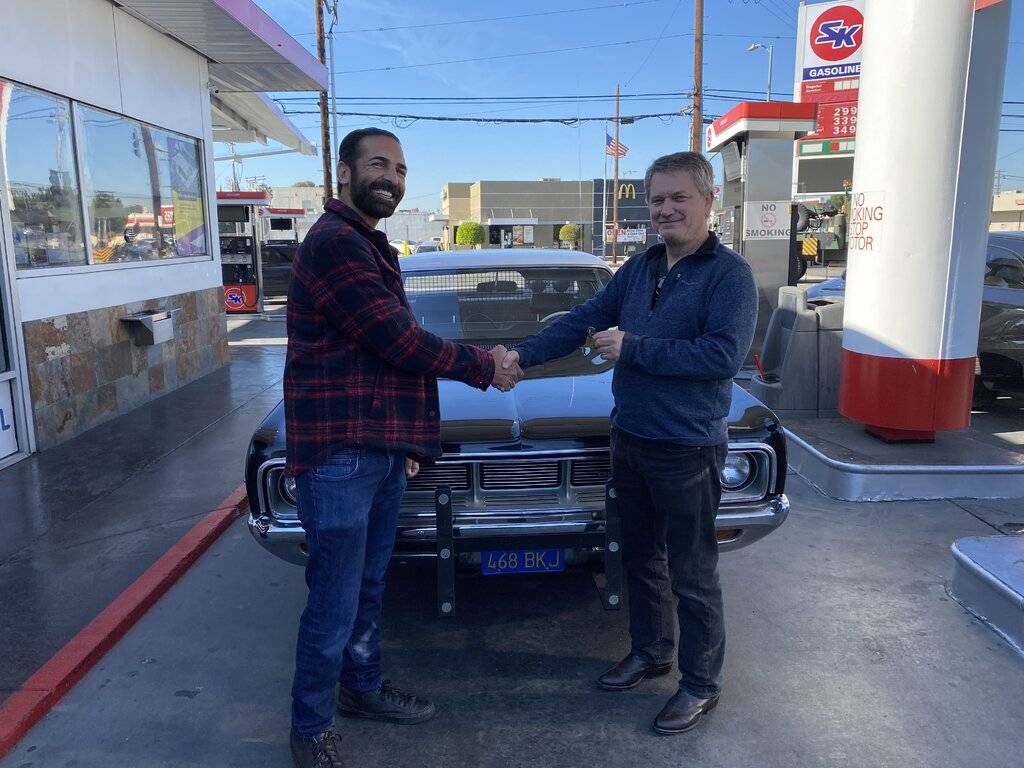 9:45 cash in hand we hit the road to Phoenix
6:00 we get to Phoenix after a few stop for gas and food, too late to see that car we drove by to see if it was cleaned up or even where we could see it, didn't see it.

11/12 8:30 we go to DVAP and the car is in one of the bays to be cleaned, apparently they needed to fix something on the exhaust also.

Right away we started looking the car over and it quickly became apparent the car needed work. After a cursory walk-around we got and fired it up, it fired right up and sounded healthy (bad exhaust leak halfway back on the head pipe). We tried the windows, they went down sort of, tried the top, nothing, hear the pump, just no movement. After a little work we got the trunk open with the key (then put WD-40 in the latch and cylinder), lots of spare parts. Checked the quarters and the pan and they looked good so we had them put it on the lift so we could look at the bottom. 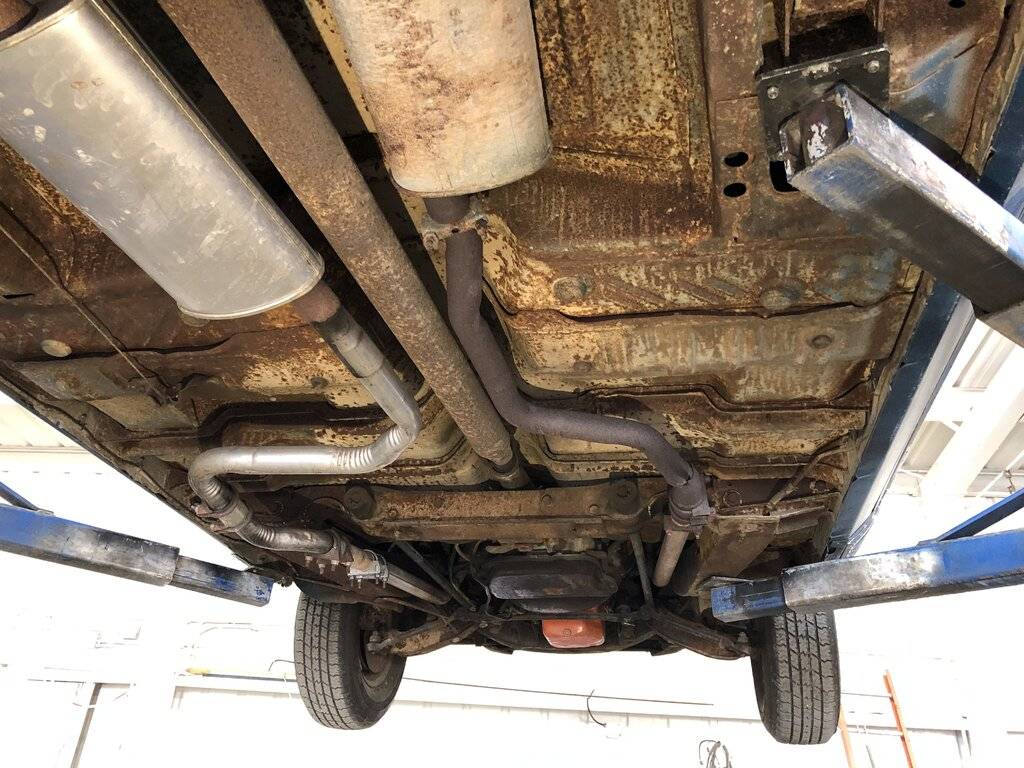 There was surface rust but no cancer. We checked the engine/trans numbers and they were correct. The exhaust was a mess, lots of over the counter parts all cobbled together and it was hanging low, the other side had a split in the pipe that was a 1/4 inch away from failing. We did our best to tie them both up with bailing wire. there was a c-clamp on the starter that we need to look into. 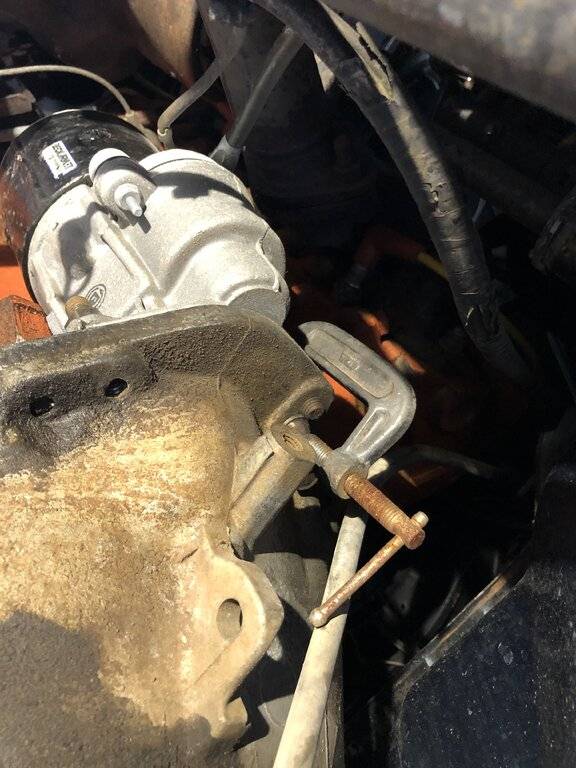 The grill, side trim and wheel covers were all polished and no paint on them. 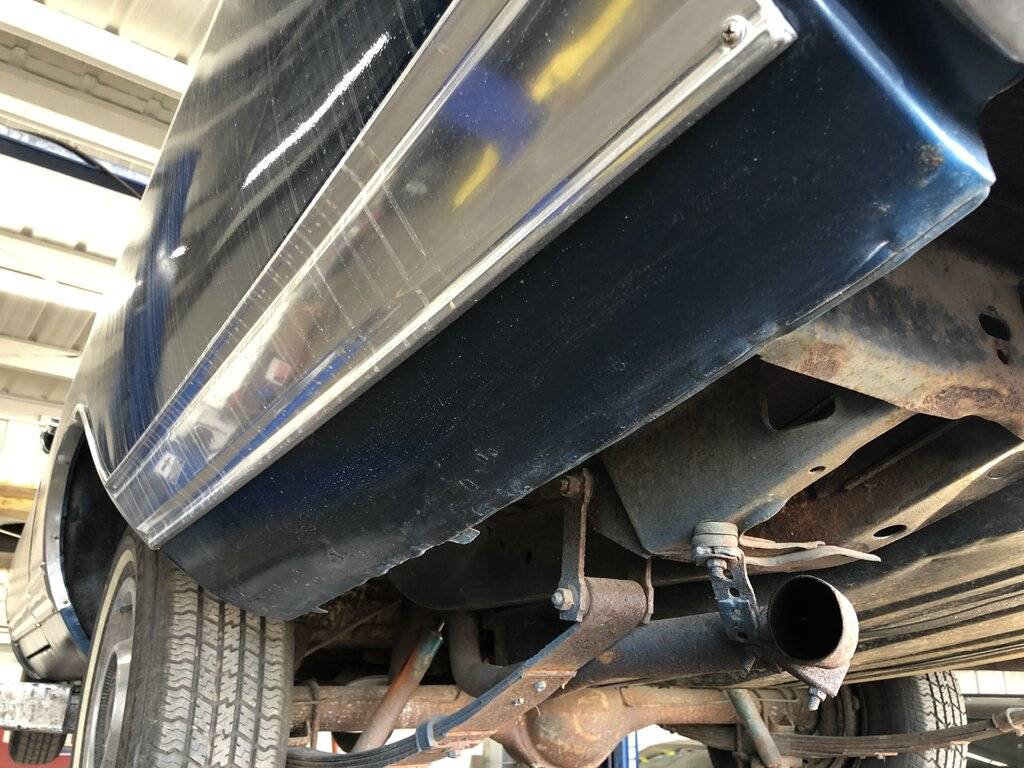 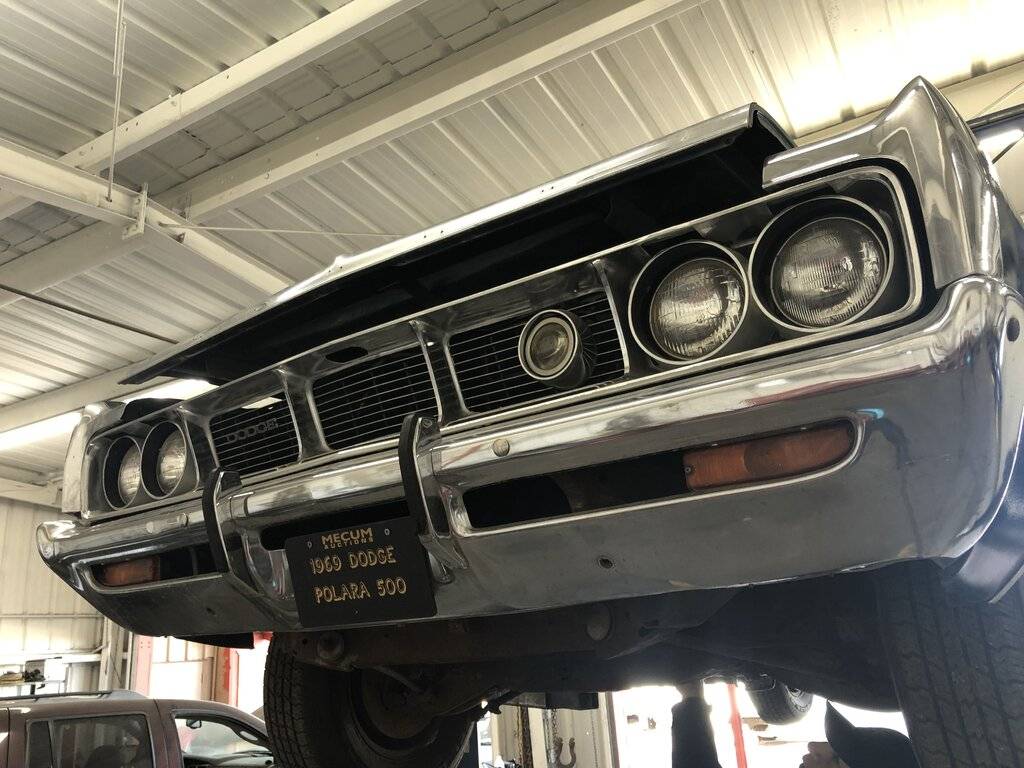 After we were done looking at it they washed it and we went and talked with someone inside about price, he made some calls and said the owner would be there in a little while.

We took the car around the block and tested the brakes, steering etc. and everything felt fine. we get back and go to lunch, after lunch we get back and still no owner but we had an agreed upon price so we move on closing the deal.

While out we got some transmission fluid and some exhaust tape in an attempt to patch the leak. 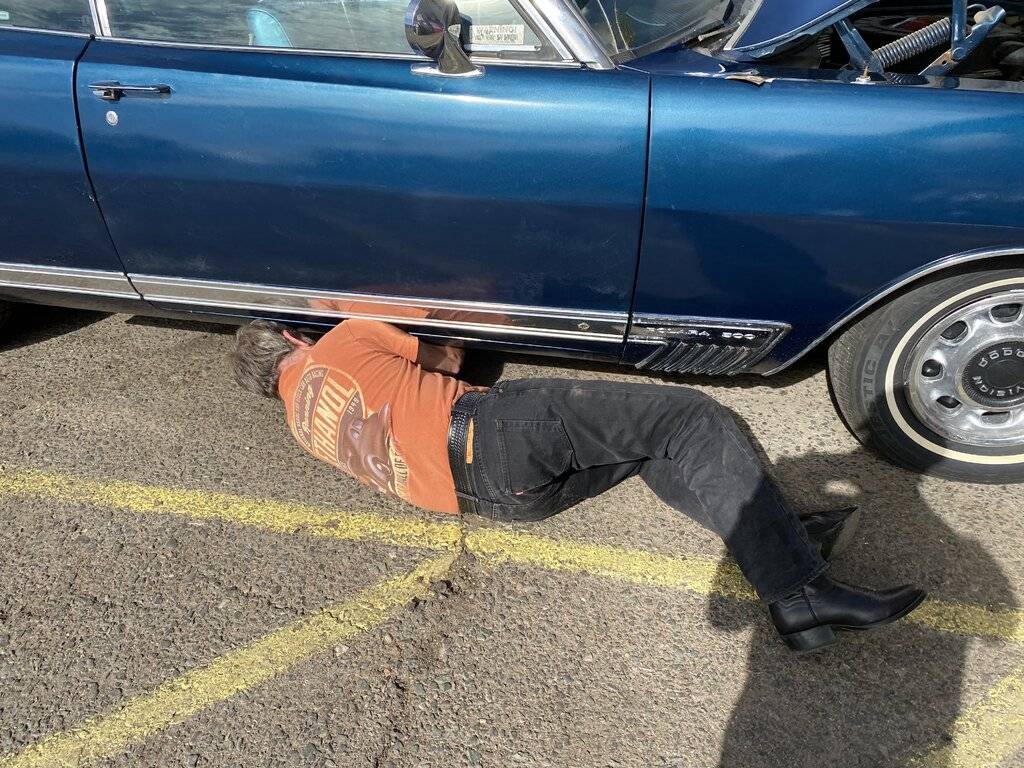 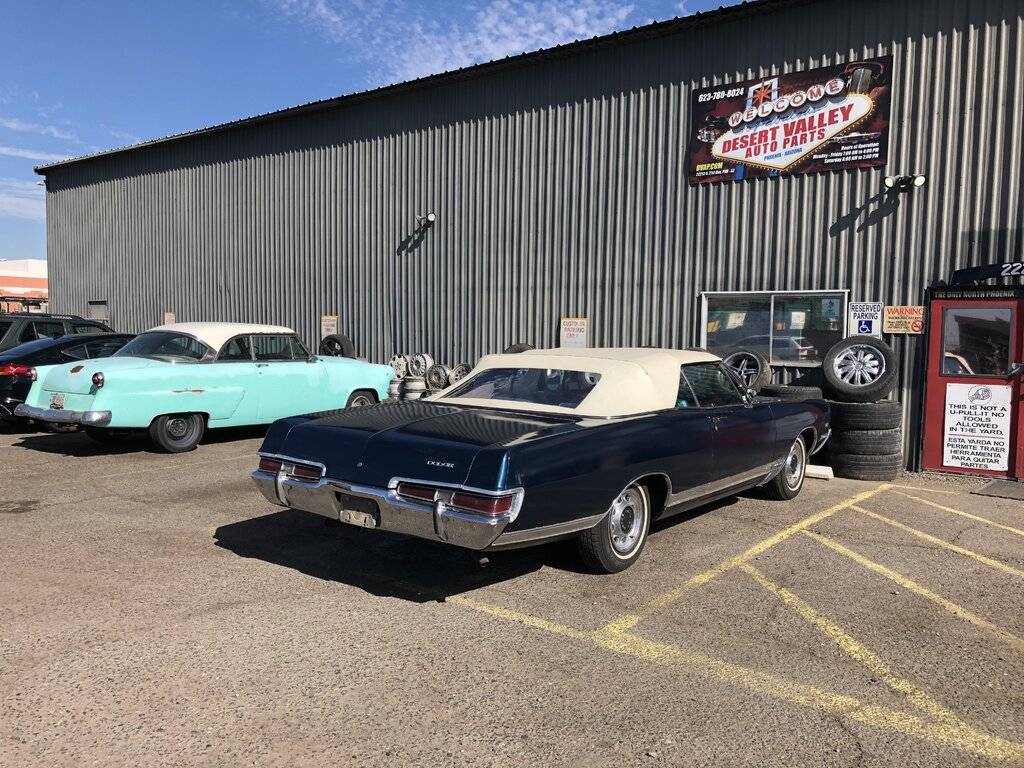 1:15 we headed out and topped off the tank, good thing, dead gas gauge. Initially when I got to about 75 the car would shimmy so I backed it down and held it there. After about 30 miles I stopped noticing it so I just went with the flow sometimes passing other at 80.

About an hour out I stopped at a rest stop to give my friend a report and check on speeds. When we went to leave it didn't want to start, so we tried to jump the starter relay, nothing. Then we looked at the fusible link and noticed a connector that was about to fall off, it did. I had some test leads in my tool bag so I tried on and still nothing (my Harbor Freight voltage meter was dead). So back to the starter relay, jumped it with a screwdriver and it fired right up, quickly I noticed that the test lead was HOT, not heavy enough, shut it off. 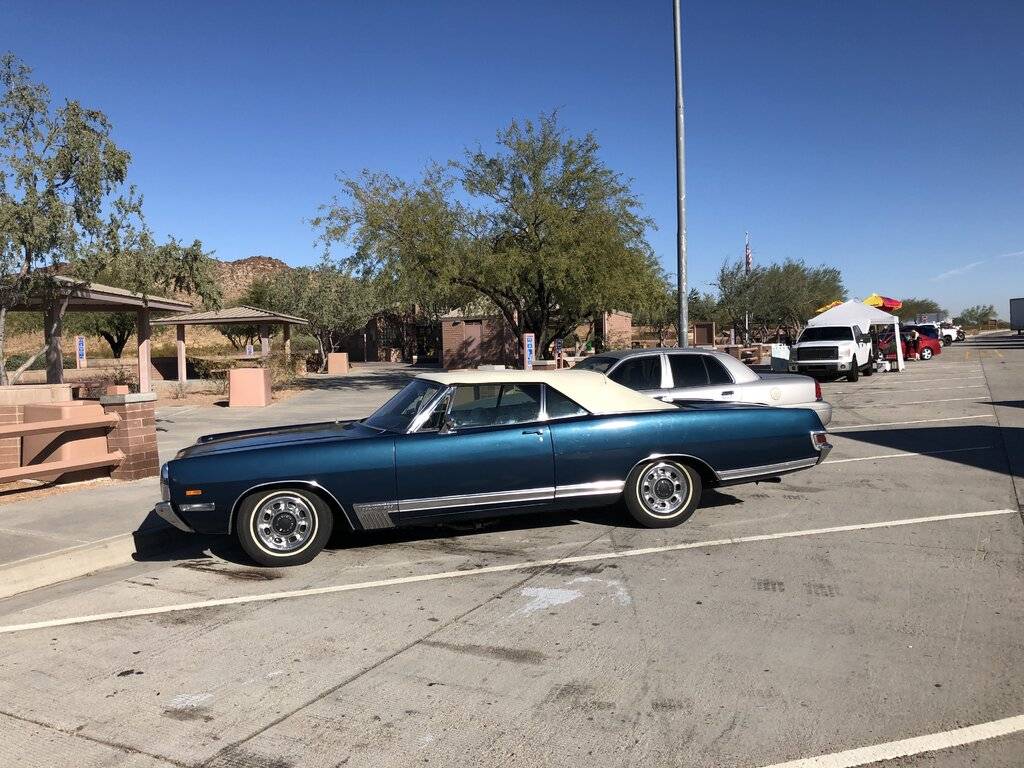 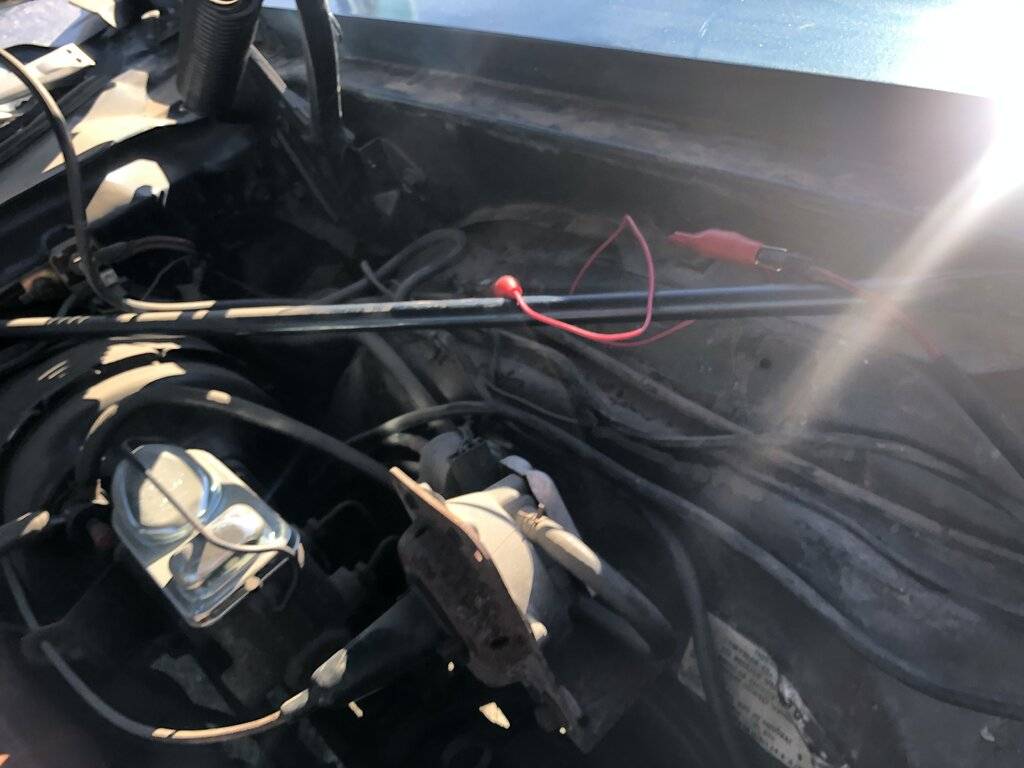 We took the connector and started trying to get it opened up and remove the wires. After a little time and the help of a trucker we got it to where we could get the wire in it, my friend had a crimp tool in his trunk so we got it fixed and tapped up. Still needed to jump the relay, what are the odds of having those both fail at the same time.

after an hour in the rest stop we were on the road. No problems other than the exhaust hitting the ground. 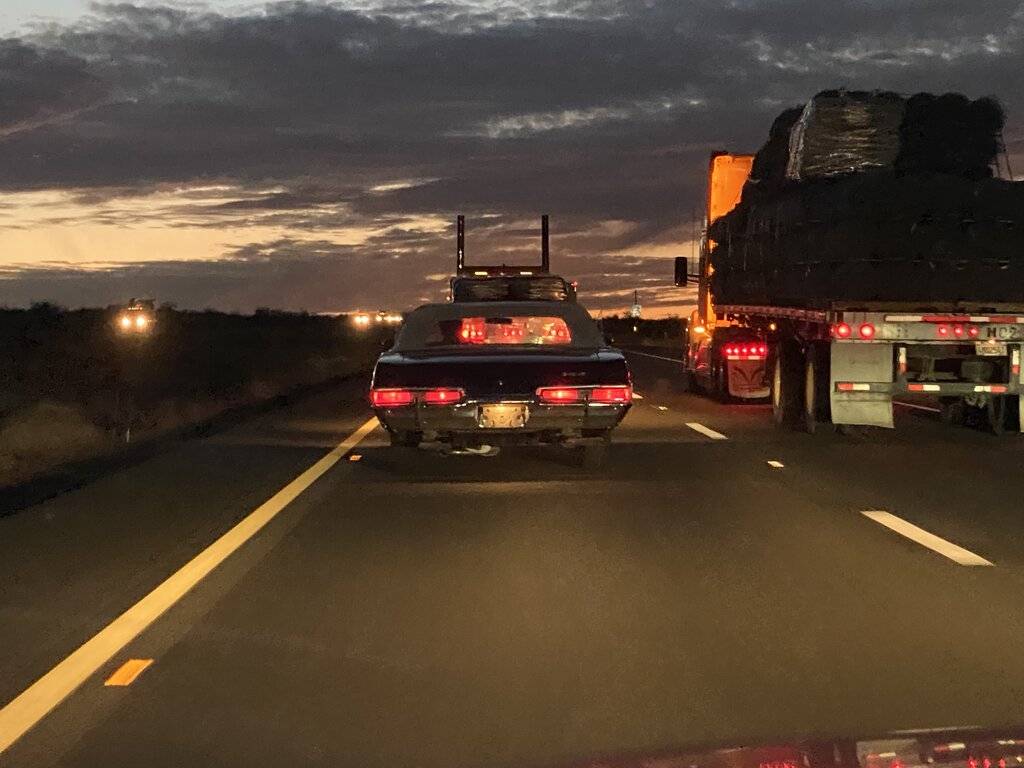 About 2 hours from home I started up a short hill and it started sputtering like it was running out of gas, eased up and it recovered. A few miles later it did it again.
The next 20 mile were flat and it was fine at speed, another hill a little bigger and it did it again, it was good for the next 30 mile where it started doing it on the flats, got off the highway and noticed it was good under 55, do we got on the highway and went 55. About 45 miles later it was getting harder to go even 55 so I took advantage of every hill to build speed up and continued. 20 miles from the house that was a big grade I knew would probably kill us. Sure enough we with the hill and quickly the speed dropped as I backed off trying to keep it from stalling. Somehow we made it up that 2 mile grade idling 5 MPH. After a couple smaller hills we were home. 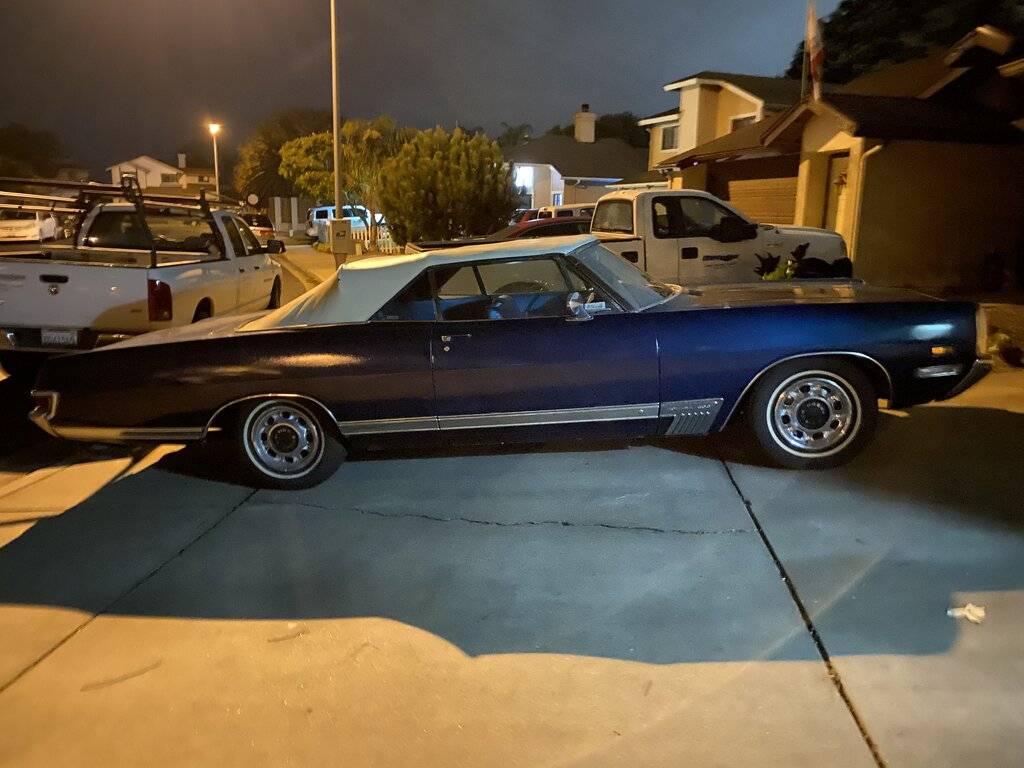 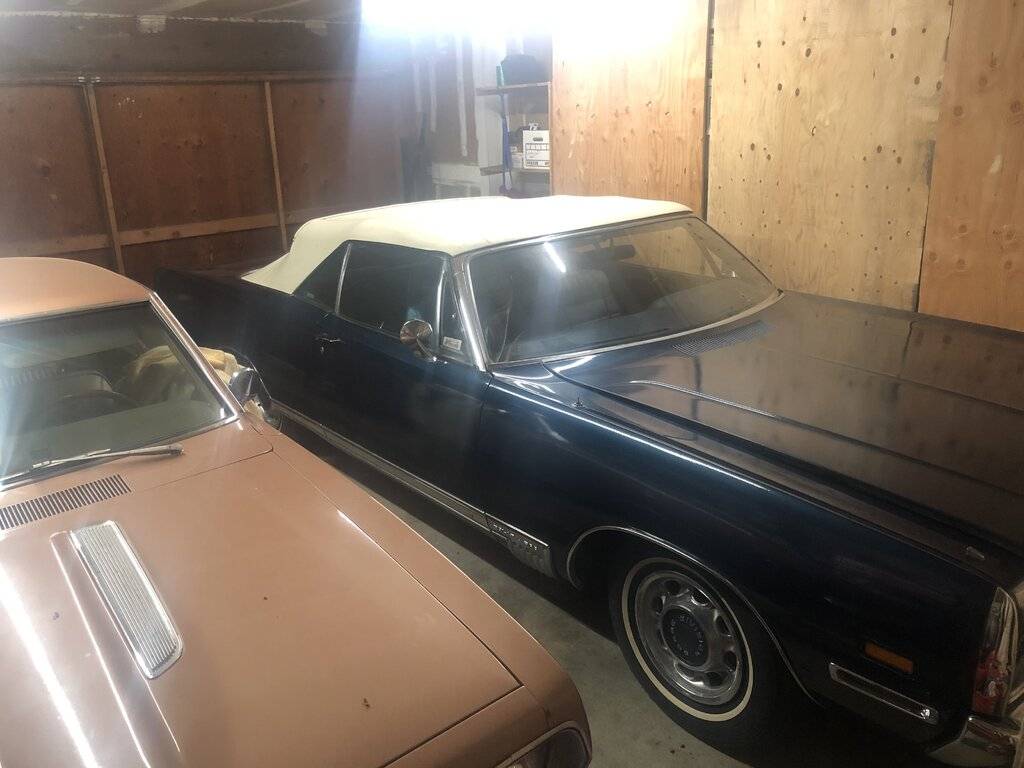 After the second gas stop (2/3 trip) I closed the vent windows and was surprised how quiet it was, virtually no wind noise. Overall driving experience was great, it even got the thumbs up on the highway. Even after 540 miles and the issues I was not all pumped up like I was with the CHP car on a 200 mile drive.

Welcome to the Fuselage convertible club ...

Great story! That car is sweet, love the color combo, super attractive. It has to be rare as well. Couldn't keep the cop car also?

Great story Alan, love stories from the road. Especially like the one you posted. Quick, to-the-point, no effin around, a few pics, just perfect. There's a pretty good show on Prime called Deathwish (not Charles Bronson), that is about a guy from NH who hits the road to pick up and work on cars, trucks, etc. and gets help from the auto community along the way. Your story kind of reminded me of that.

PH27L7 said:
Great story! That car is sweet, love the color combo, super attractive. It has to be rare as well. Couldn't keep the cop car also?
Click to expand...

Two of the big three,
Too Far, nope
Too Expensive
No where to keep it.

Basicaly to get the money I needed to sell the CHP car and I didn't want to keep a vintage car outside.
And I just wasn't using the CHP car, I'm not a collector, investor or a show car guy. I take my cars to show and never see them till I leave, don't care about trophies (they all went with the car) and with the limited use of the car it just didn't fit my lifestyle.

I joke about this one, half the money twice the fun four times the value.

What a great road trip story, Alan.
The polara body seems to be very healthy, onely some electrical and maybe some carburetor problems. I'm wondering about the c-clamp, but it brought you home ;)
I'm sure she'll have found a good new home

^^This, exactly. You did good Alan, and I'm sure this car will get the love it needs.

Great catch! We know about DM27L9D200582 's recent history from this thread. If you manage to find out more about the origins of the car, I'd love to hear about it. Enjoy in good health!

FWI DVAP was the one who purchased it from the auction, they knew there was little room to make money and that is why there were pretty firm.

Great story Alan. Please keep the information coming. While I'm sorry to see the CHP car go (and so quickly!), it seems like you're going to be happier.

Regarding the CHP car, I'm assuming that given the value of the car (which would hopefully scare away morons) the new owner is going to treat it with all the reverence it deserves.

Looking forward to following your progress on this one.

This is great. I get to see another great restoration on someone else's nickel. Congratulations, Alan.

commando1 said:
This is great. I get to see another great restoration on someone else's nickel. Congratulations, Alan.
Click to expand...

Whereas this isn't necessarily going to be a restoration, it will get restored. Engine, steering, suspension and brakes before any esthetic stuff, then top and window operation.

Indeed, welcome to the Fusie 'vert club! Best of luck with it! I still find myself referencing your CHP website for information, I hope that sticks around, but I think you made the best choice and a great catch.

Samplingman said:
Indeed, welcome to the Fusie 'vert club! Best of luck with it! I still find myself referencing your CHP website for information, I hope that sticks around, but I think you made the best choice and a great catch.
Click to expand...

The CHP restoration pages on my website will stay, and I'll keep a link on the main page.

Glad you made it happen. Curious about the fuel system issues, when you find out what they were. I suspect you went to sleep with a big smile on your face! Both from the successful purchase and making it home without too many problems.

Bombing down the highway at 80.

Nice catch - congratulations!!!
You must log in or register to reply here.