I couldnt find this already posted so wanted to pass this along. Start saving your $$ 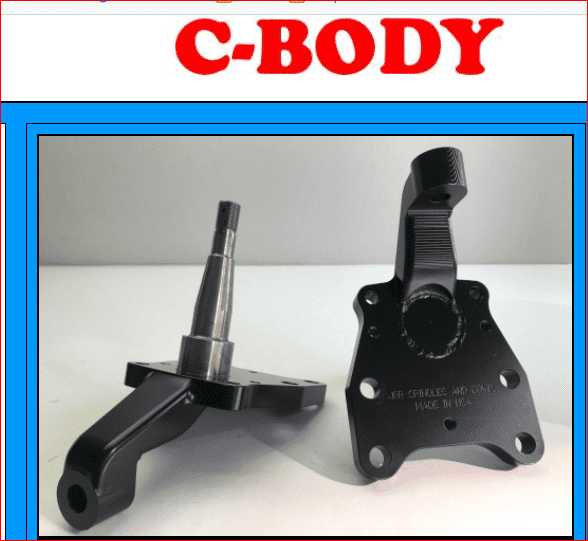 Wow, don't see too many of the guys here spending that kind of money.

I'll split it with someone and then lower the other side in a few years.

You have to recover R&D costs somehow, but at that money, it'll be a while, I believe.

To me they look like drum brake spindles, not disc.

Good point...only way to know for certain is ask, I guess.

"C" bodies have a larger space for the lower ball joint mounting, these look like the smaller ones.

traintech55 said:
"C" bodies have a larger space for the lower ball joint mounting, these look like the smaller ones.
Click to expand...

Good to know.
what if ill chage lower ball joints from another body type?

Juzi said:
Good to know.
what if ill chage lower ball joints from another body type?
Click to expand...

The other body styles are about 2/3's the length of a "C" body. This would throw your steering way out of whack.

traintech55 said:
The other body styles are about 2/3's the length of a "C" body. This would throw your steering way out of whack.
Click to expand...

I just checked some lower ball joint pictures on google and it looks like B and E body disc brake ball joints are that 2/3 or maby even 1/2 of the orginal c-body ball joint, but if you look A body ball joint with drums thats seems to be about the same lenght of stock c-body with drums..
Also i dont mind if the tie rod end is little bit closer to spindle.
I think it just steers faster and more, but stock location would still be optimal for my application.
S

Wow , get drop spindles for a Firm Feel of your wallet.

Someone on FB claims to have done a Dakota spindle conversion, and there was a thread on here discussing it, but no definitive conclusion of whether it's a good idea or what parts/modifications are needed to make it work.
C-body Dakota Front Disc Brake Swap

I've talked to the boys at firm feel several times.
I dont think they would knowingly sell anything that wasnt tested.
The picture on their site is clearer
"JRR Spindles + company" is engraved in the spindle.
I never had time to search JRR
Something tells me firm feel is middle man

MrMoparCHP said:
The problem I have with dropped spindles on a Mopar is you are messing with the geometry. With this and other dropped spindles you are moving the ball joints closer together, that must have an impact somewhere.
Click to expand...

I don't follow you. If these are new parts where they're relocating the axle shaft up on the spindle relative to the attachment points, i.e. keeping the top where the upper balljoint attaches and the lower holes where the lower balljoint/arm attaches in the same locations, then the balljoints aren't any closer together than stock.

There was someone that was selling a C-body disc conversion kit using B-body spindles, which would have had alignment problems such as you're describing.

Funny thing is, these look like drum spindles, not disc spindles. My guess is they expect you to use these in conjunction with someone's drum-to-disc conversion kit.

In looking for pictures of spindles I came across a helpful forum post where someone measured the dimensions of several Mopar spindles.

Using C-Body spindles on an E-Body ( and A-Body LCA's & Viper calipers) in Wheels, Tires, Brakes, Suspension & Steering
You must log in or register to reply here.