Imperial ambitions in the age of Exner and Eisenhower 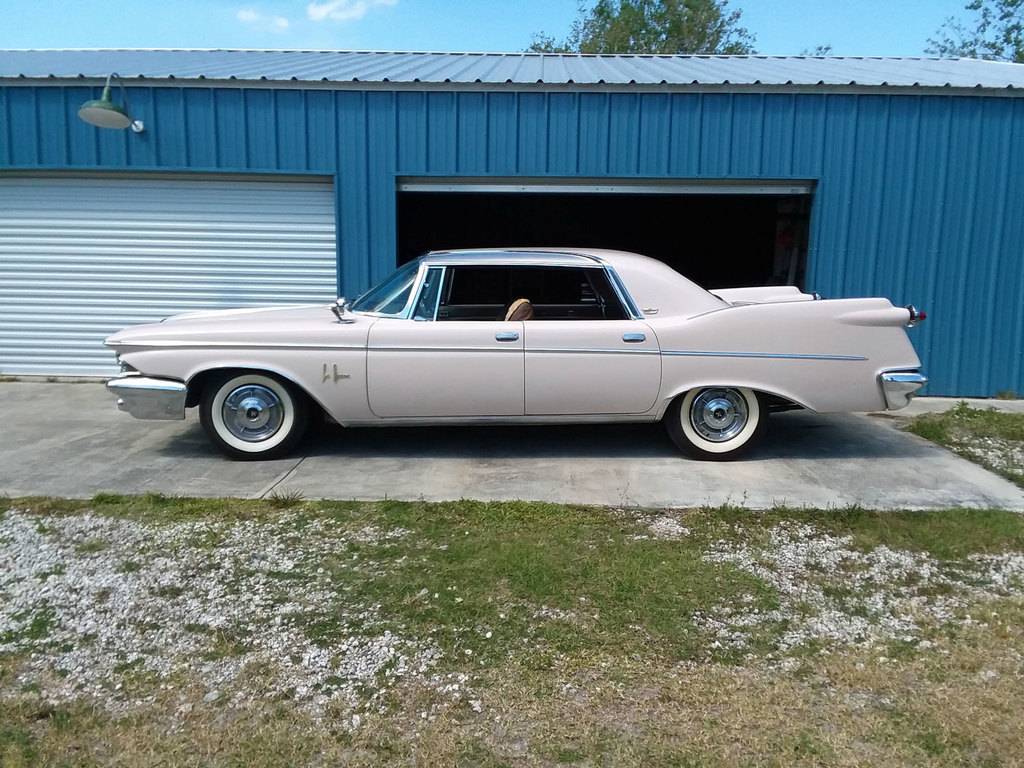 Out in New Jersey, some might still remember the night they saw a flash of towering tailfins and “gunsight” taillights blow past them at more than 100 mph on Route 78. It happened about 20 years ago, but the sight of a huge, red 1957 Imperial coupe covering ground at that stunning rate of speed is bound to leave a long-lasting impression.

That was Ed Micalef—Eddie to his friends—on his way to visit his girlfriend, Bonnie. After introduction by Bonnie’s cousin, the two met for the first time at a car show, she in her ’57 Thunderbird. They’ve been cruising together in finned cars ever since. The night of Eddie’s high-speed run, he wanted to experience what the 392-cubic-inch Chrysler FirePower hemi-head V-8 felt like when he dug in his spurs.

Even today, Eddie marvels at how quickly vehicles traveling ahead filled his Imperial’s giant windshield. The leviathan coupe’s weight, stability, and ample sound insulation made its speed feel 20 or 30 mph lower than it was, he recalls. The dash, meanwhile, put on a light show, with the two huge, round instrument pods glowing with green bezels, purple digits, and bright orange pointers.

Eddie’s flagrant display of high-octane, Eisenhower-era exuberance must have been quite the spectacle for those who witnessed it. The luxury-laden, gadget-gorged ’57 Imperial epitomized the peak of car-design icon Virgil Exner’s pivotal “Forward Look” style movement at Chrysler in the 1950s. Just a few years prior, though, Eddie’s Imperial was in no condition to represent Exner or what many consider a golden age of Chrysler design and engineering. It was, he confesses, “a P.O.S.” 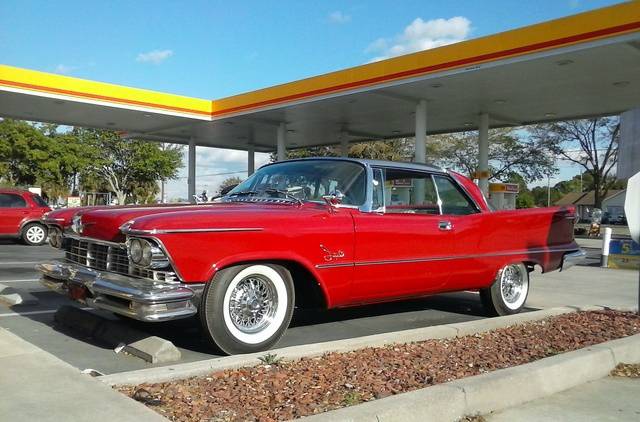 “It was white, red, and gray. It had no exhaust, there were holes in it, and the interior was horrible,” he says. “It needed springs, tires, and brakes. Everything was wrong with the car. But I was like, ‘It’s got tailfins! I can fix this up!’”

Eddie had planned to give the car to his father, from whom he’d inherited his love of Mopars. In 1967, when Dad traded in the family ’57 Plymouth on a boxy new Belvedere, four-year-old Eddie “raised hell” over the switch. Getting the ’67 car as a high school graduation present 14 years later seemed like a suitable compensation for that moment, but he still missed those fins.

“In high school, I had a magazine with the cars of 1957,” Eddie says. “I saw the Plymouth and the Imperial, and they stuck in my mind.” (Author’s note: Eddie and I attended Bayonne High School in New Jersey in the 1980s. We lost touch afterward but reconnected a couple of years ago.)

When the dilapidated Imperial arrived via flatbed at his parents’ home in Bayonne, Eddie’s dad was not impressed.

“He liked it after I fixed it up!” Eddie laughs today. 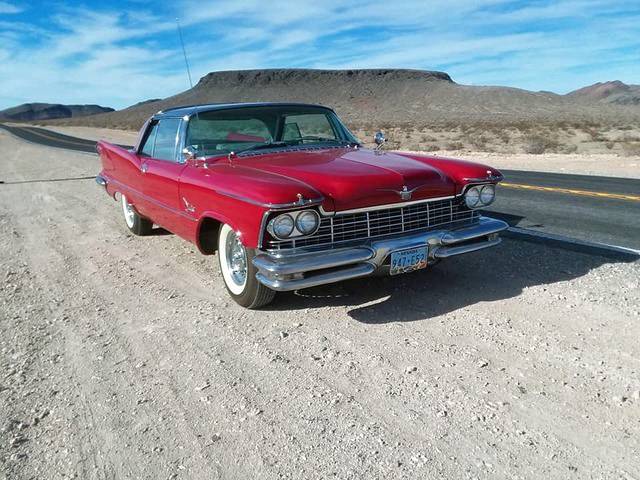 At the time, Eddie was working as a technician at a Ford dealer in neighboring Jersey City, and his parents were no longer driving. He would visit and chauffeur them in the Imperial for leisurely rides through town. Driving the giant car took some getting used to, though.

“It was off-putting at first,” he says. “I felt like a teenager driving for the first time. After a while, you get used to the large size. They’re very nice riding cars.”

Eddie continued working on the Imperial, replacing the lower quarters, trunk, and fenders. He rejuvenated the 392, rebuilt the TorqueFlite transmission, replaced the Total Contact brakes, and restored the interior with materials from SMS Auto Fabrics. Not surprisingly, finding good used or rare NOS parts, especially before the internet, took effort and patience.

“Hemmings was my best friend,” he says. “I made a lot of good connections.”

“It’s not perfect, but the interior is original and not bad for almost 60 years old,” he says.

In 2002, Eddie accepted a job teaching automotive tech in central New Jersey, and four years later, he and Bonnie got married. His Mopar collection by then included the two Imperials, a ’57 Plymouth equipped with a DeSoto 341-cid FireDome Hemi, and a ’67 Satellite purchased from its original owner after someone T-boned his Belvedere. Bonnie has two Cadillacs, a ’57 and a ’59. When the couple moved to Florida, and then last year to Pahrump, Nevada, all the cars went along. 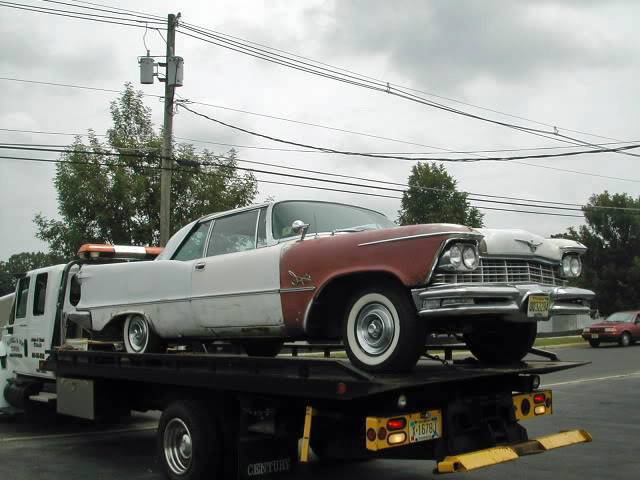 The 1957 Imperial was Chrysler’s risk-taking at its Space-Age flashiest. Two years before, the company had recast Imperial as a separate division in a bid to be more competitive with Cadillac and Lincoln. That year’s “Forward Look” designs created under Exner’s direction were a warm-up act for the even brasher ’57s.

Daring style, new engineering advances, and a full model lineup that included a convertible positioned the ’57 Imperial to take on the world. Riding on a 129-inch wheelbase, Imperial did not share its bodyshell with Chrysler and was built on a separate line in the company’s Jefferson Avenue assembly plant in Detroit. Its Super Scenic windshield wrapped around the sides and into the leading edge of the roof, and curved side glass, a first for an American car, further smoothed the look. The audacious tail fins were rounded compared to Cadillac’s pointed blades and flowed organically rearward from the doors. Some thought the optional Flight-Sweep trunk lid, with its stamped-in faux spare tire cover, looked like a toilet seat.

The ’57 Imperial also debuted Chrysler’s 325-horsepower 392 and the TorqueFlite three-speed automatic transmission. (The official, trademarked “Hemi” name came with the second-generation version of the engine in the 1960s.) New Torsion-Aire suspension used torsion bars in front, tapered leaf springs out back, and wide 14-inch tires running at low pressure for a cushioned ride. Snapping torsion bars were among the numerous problems that plagued 1957 Chrysler products. 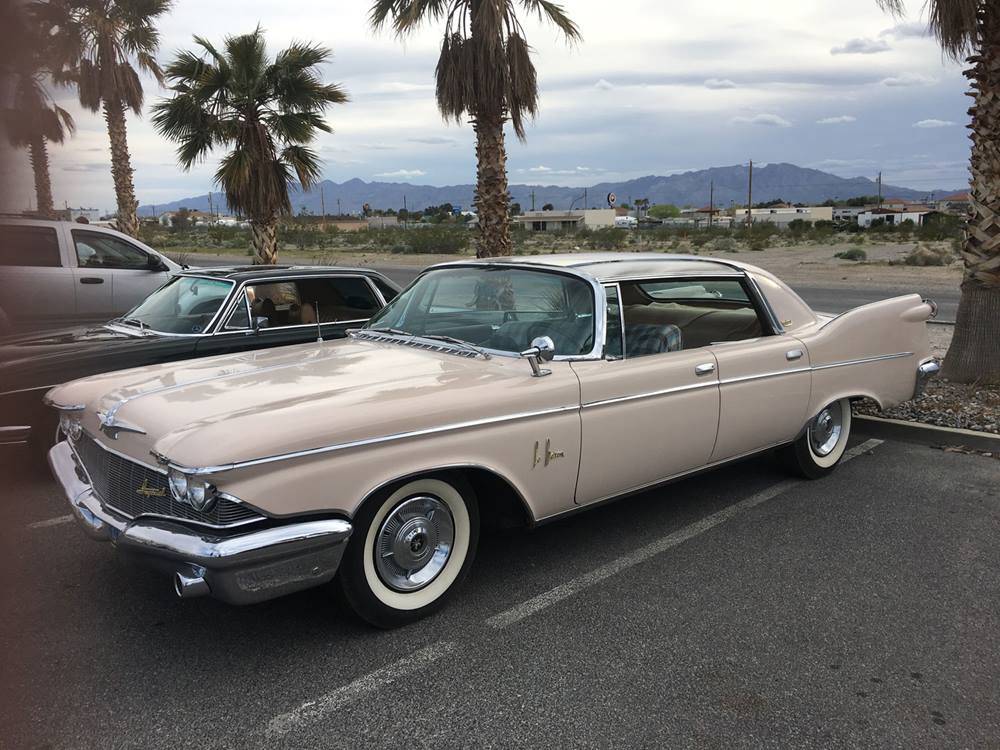 Imperial matched or exceeded Cadillac on luxury and gadgetry, but not without hiccups. The optional under-dash Highway Hi-Fi record player, also available on other Chrysler products, added a wow factor but disappointed with jumpy performance and a skimpy music selection on specialized ultra-micro-groove 16-2/3-rpm records.

The Imperial offered a wide array of exterior paint colors and interior fabrics and leathers. The pseudo-French “LeBaron” name for the top model originally belonged to an American coachbuilder that made some memorable bodies for Chrysler Imperials in the 1930s. By then, automotive body supplier Briggs Manufacturing owned LeBaron, and when Chrysler acquired Briggs in 1953, the name came with it. The trim level between the base and LeBaron was called Crown.

The 1958 Imperial received a new grille and front bumper, along with a horsepower bump to 345. New options included electric door locks, a remote-control outside mirror, Goodyear Captive Air tires, and Auto-Pilot cruise control. In a punishing recession year, Imperial production plummeted to just over 16,000.

A grille change for 1959 was less significant than what sat behind it. Chrysler’s new 413-cubic-inch wedge-head V-8 engine gave Imperial 350 horsepower and more torque than the 392 Hemi it replaced, while also cutting about 100 pounds. 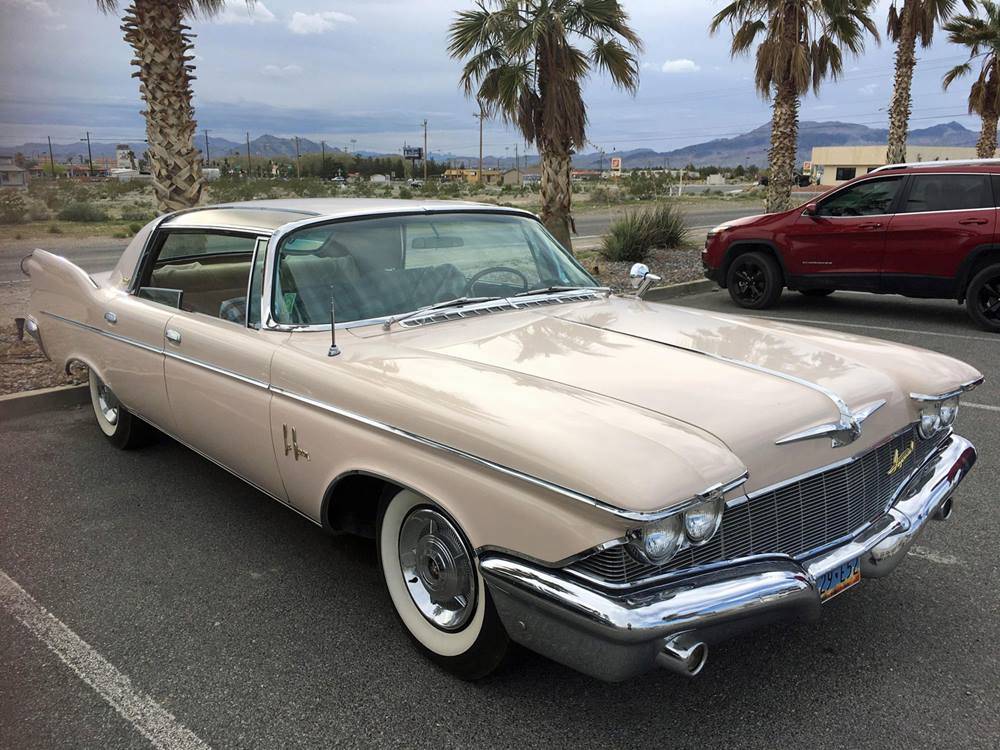 Ed Micalef
1960 Imperial LeBaron
Imperial production switched places with a DeSoto engine and body plant in Dearborn, giving it a dedicated facility until 1961. The DeSoto brand by then was two years from extinction. Sill trying to put 1957’s troubles behind it, Chrysler touted the Imperial’s quality, including 700 different “hand-crafted” procedures during assembly and a road test for each car.

While Chrysler switched all of its other cars to unitized construction for 1960, Imperial remained on its separate frame, and the basic ’57 body shell continued with another front-end restyle. The look changed yet again for ’61 with a new grille and neo-classic freestanding headlights, which inspired love or hate reactions, but mostly hate. Redesigned, blade-like tailfins seemed out of place when most cars had either trimmed or eliminated them. Production failed to reach 18,000 in 1959 and 1960 and then stagnated in the 12,000 range through 1963.

The minimally decorated, slab-sided 1961 Lincoln Continental, meanwhile, had established a new design archetype for luxury sedans, signaling the end of the flashy Exner-era Imperial. The Continental’s chief designer, Elwood Engel, left Ford that year to become Chrysler’s design chief. As one result, the radically redesigned ’64 Imperial body, still on the same chassis and even using the same windshield, reflected the Lincoln’s influence. Sales doubled to nearly 24,000 but then slid again. The nameplate would never again match its ’57 peak.

Out in Pahrump, Eddie Micalef doesn’t give much thought to 1950s sales trends. He just enjoys cruising in the Imperials he rescued, taking in the scenery, and sharing stories with other enthusiasts. 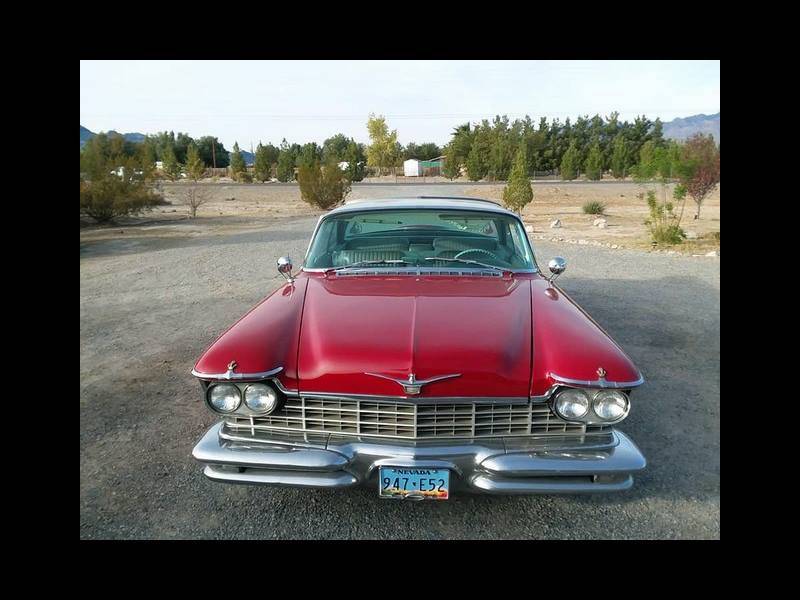 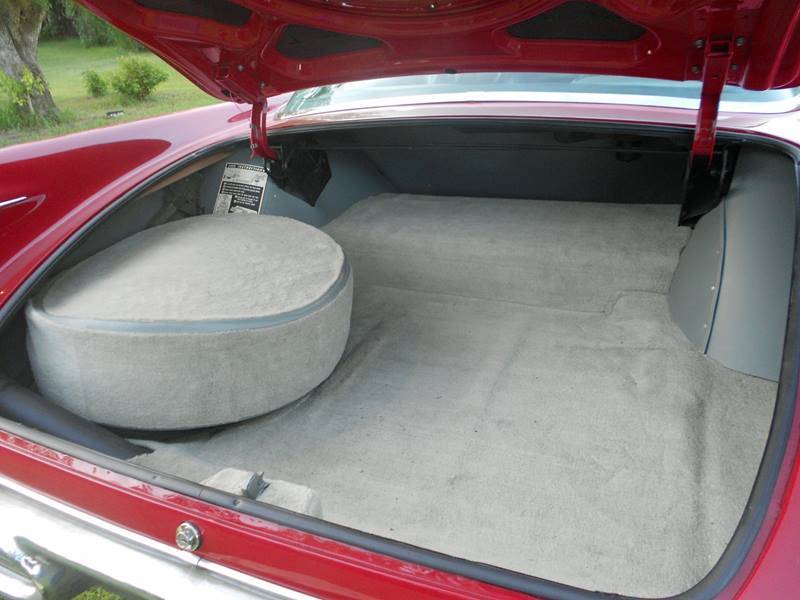 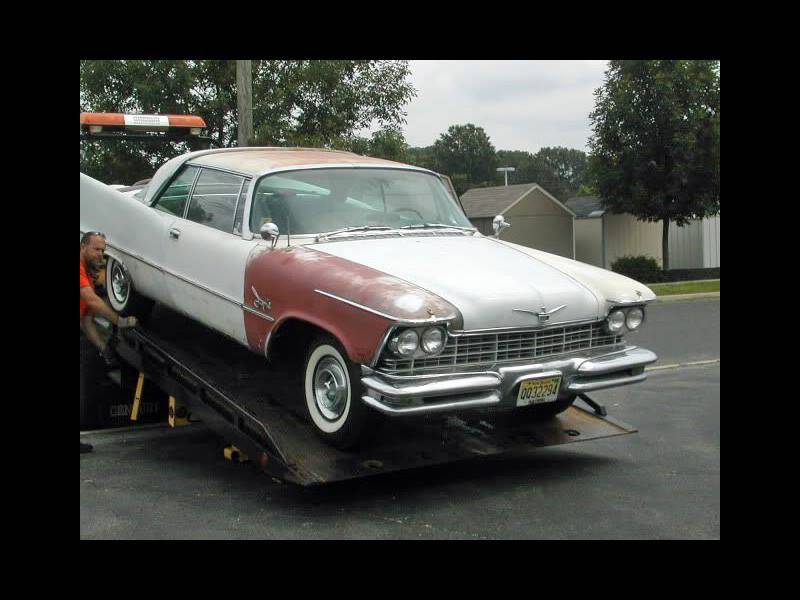 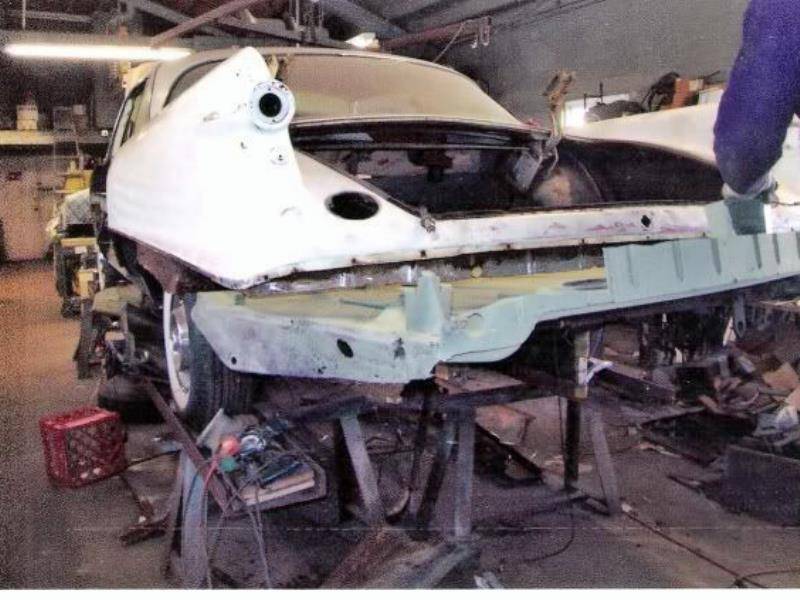 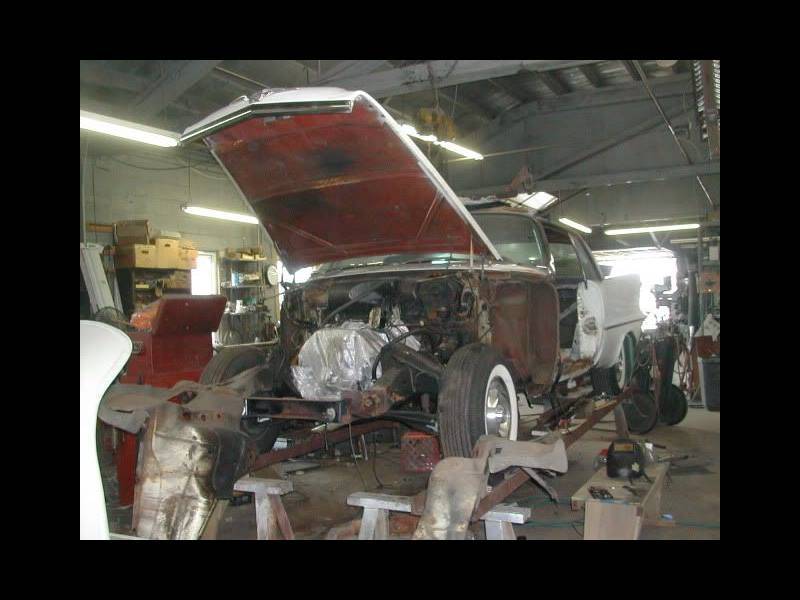 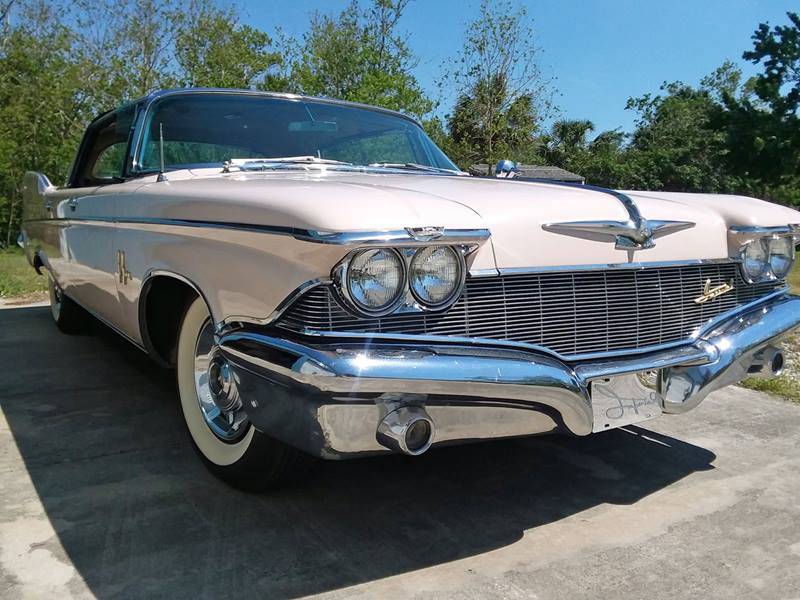 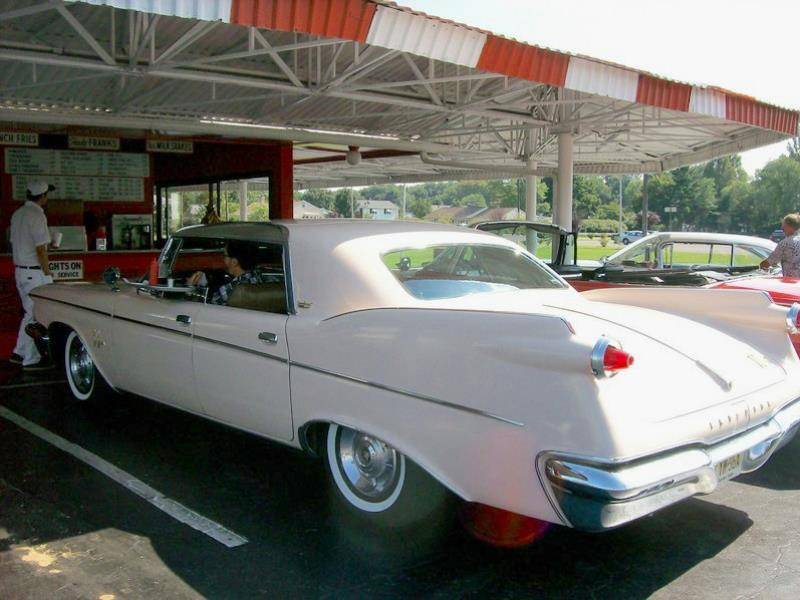 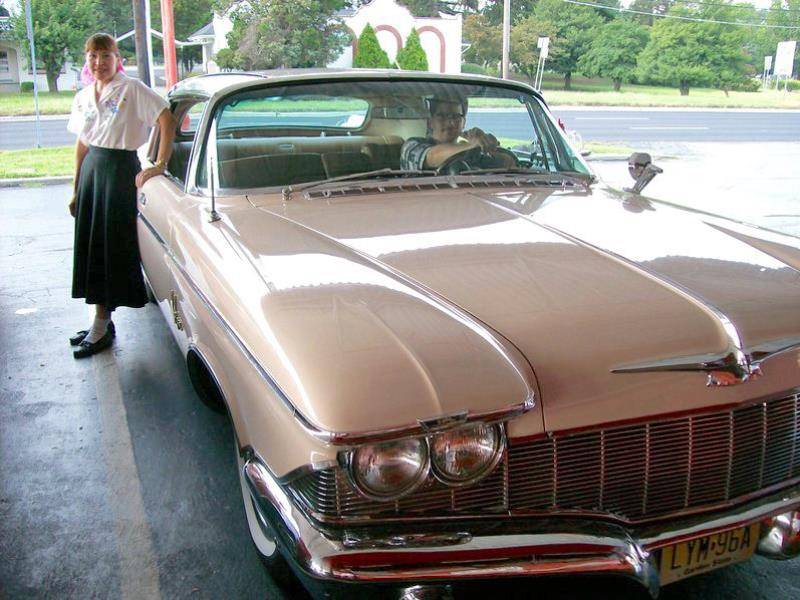 I swear I saw this article earlier today? Great read, but I think Matt beat ya to the punch..

I looked at the most recent submissions. I did not see the title close to the one of the article. I went out of my way to cut and paste the article as some chastise for people not putting it on the main page.

This one don't have to click on any links

BTW, did you acquire that Buick you recently posted about?

It is hard not to love either one of those Imperials. Astonishing cars back in the day and even now.

LeBaron1973 said:
BTW, did you acquire that Buick you recently posted about?
Click to expand...

No, it was pulled as I suspect he sold it. Still hunting for a lot/building for my herd of cars.

Stunning in that color!

Pete Kaczmarski said:
No, it was pulled as I suspect he sold it. Still hunting for a lot/building for my herd of cars.
Click to expand...

I'm sure the right one will come along, hope the right location for your herd will appear soon, all the best Pete, I have fond memories of meeting you and Glen.
You must log in or register to reply here.

Auto Temp II Overview - another video by "Adam", whose subjects are usually large vehicles from the late 60s/early 70s, the ones we focus on