I mentioned him in another thread but lo and behold he showed up yesterday. Way up in the Island I heard the lift running and looked over the side to see Willie walking off the lift using his walker. Didn't get over to say Hi till noon during my lunch as I was busy with other tasks.

Willie was sitting in front of our F-8 Crusader which he flew in Vietnam. Next to him is a complete seat out of an F-8 and next to that a display case that holds his actual flight suit on a mannequin. I sat in the seat next to him to see how things were going. First thing I said was this seat doesn't have much cushion for hours flying and he said yes and mentions he had a bony ass.

Usually I ask how his health is doing. About 4 years ago he had to go into the VA to get a left shoulder replacement. Complications were an infection that was hard to shake. Docs tried all the last resort antibiotics. Sounds to me like he had sepsis. This attacked his left hip and right knee while in the hospital and home. The knee was especially difficult to clear up and Willie got tired of it. So he told the Doctor to take his knee off and the Doctor didn't think he was serious. He was as he said I have better things to do than sit in a hospital. So that is how he got his new knee with microprocessor and titanium lower leg.

From there we are talking and I am starting to put two and two together. Talking about ejection is when Willie then proceeds to tell me what happened start to finish. So here it is followed by a video I found of actual footage of him as he was hit.

Him and his flight leader were to escort a six plane strike team of A-4 Skyhawks. The mission was a railroad yard were there were parked box cars that it was felt supplies were being stored. The first group of Skyhawks flew their attack south to north over the target and then exited. The second group was to fly north to south but encountered heavy AAA.

The flight leader of that group said they need suppression of that AAA to the flight leader of the Crusaders carrying Zuni rockets for just such a thing. Ordinarily the Crusaders flew high cover to protect the Skyhawks from opportunistic MiGs. So the two planes made their first pass, in order, diving on the AAA sights much like a Dauntless dive bomber in WWII. You launch the Zunis and they explode 100 feet above the target to take out personnel. Willie says it is a great weapon. First pass went fine but with rockets left it was decided to make a second pass. Most should know a second pass is way more risky than the first.

So Willie is making his second dive at around 70 degrees down. He sees some very deadly 57mm cannons off to one side. Nevertheless after pullout he feels a big thud in the back of the plane. He can't see back there so asks his flight leader to take a look. Yeah, you are on fire and need to eject. He declines as he might be over land (there is overcast) and so he'll fly east as far as he can. Willie was hit by a 37mm cannon shell.

As he prepares himself for the ejection procedure his instruments tell him he has now lost his 1st hydraulic system and his 2nd backup system to control plane. The Crusader had a 3rd system for emergency use to operate landing gear and some flight control. Well that failed and the main landing gear dropped. With the jet at 450 knots the right gear was torn off. With the left gear in place the drag caused the jet to roll to the left as Willie ejected. You pull the arms down, bring a fabric shield over your face and tuck your arms in and the wind force keeps everything in place. However, not when you are off axis as in this case of rolling left and so his left arm was ripped backwards by the wind. He though he had had his arm completely ripped off.

Seat drops away and chute opens around 11K feet above the overcast. He will not see where he is going until below the overcast and he said it was around a 1000 ft. ceiling. He lands 1/2 mile off the shore by his estimation and has to get his raft open with pretty much one arm. There are many sampans in the area and he gets spotted. Once up on a sampan he is held by two guys with one having an AK-47. The guy without the AK takes the Navy service revolver.

Now I will add a piece of information not in the video. Before his squadron was to transition overseas the CO told the wives that it would be very useful if they got their husbands a second revolver. Willie's wife bought him one and he had it in his left pocket that wasn't searched. Meanwhile Spads are down on the deck flying over the sampan. These flights distract the fellow with the AK enough times that Willie is able to get the second revolver out and manage to cock it. When the fellow with the AK realized what was going on he turned towards Willie and Willie shot him three times in the face. (One of his flashbacks). The other guy tried to use his service revolver but rounds aren't kept in the chamber for safety and so all the gun did was click and then he jumped overboard.

Willie then got back into his raft and started to paddle out as best as he could. A helo was already on the way from the first mayday and arrived over Willie. Willie was able to grab the rope ladder but unable to climb. The flight out to a nearby DD was with him dangling from the ladder. So now I know, which I was pretty sure what happened, as to why his left shoulder was replaced.

So as Willie sits there it is amazing the amount of people, who don't know him, just come up and talk to him. His wife died in 2015 or 2016 I believe but he does have this quiet attraction. They all want to take a picture of him standing next to his flight jacket and hear his pilot stories. During this time a 10 year old boy walked up and gave Willie a letter. He had met Willie once before, Willie doesn't recall, and in it he writes how much he admires Willie and two other pilots he met. There is a ps at the end asking "is it bad ass being a pilot?"

The link with the video of his flight in the middle and below that him reading his letter that he is going to frame. 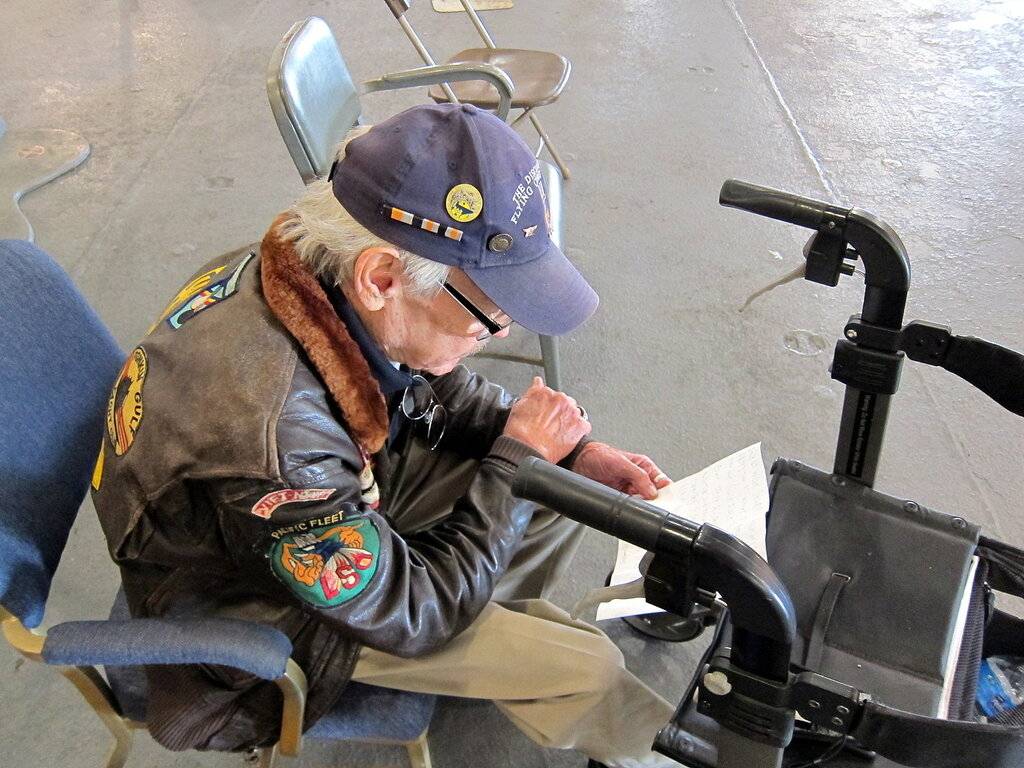 A little old but worth a reply.

Watched the video interview. In an ironic way I enjoy seeing 'old folks' that aren't sitting aroudn talking about the weather or the price of bread - while the subject is harsh, you can see he was still pretty sharp and had a story worthy of being told. (no pun intended on 'sharp')

I respect all these guys and what they endured. I wish time and resources were infinite - I'd talk to them all.
You must log in or register to reply here.

M
I'm transitioning out of the Military
2