Has anyone upgraded their alternator to the Mopar 110 Amp Alternator and if so can you wire it up the same as stock or do you have to upgrade the wiring? Not a wirirng genius and I'd like to get something I can install myself. Thanks Fellas 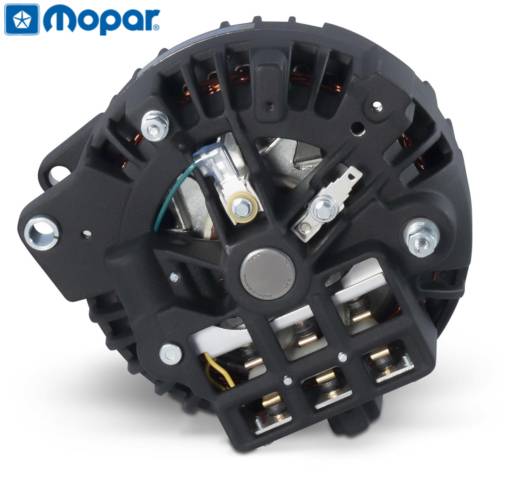 The first and probably most important question to ask if if you really need that much charging amperage?

Plan on adding a mild stereo and amp and possibly updated headlights and led bulbs.

You are going to have to upgrade the wiring, bypass the alternator gauge, switch to a 1970 & up voltage regulator and more. You should be fine with a 50-60 amp alternator, but even with that, you should check your wiring. Just my 2 cents.

Cortez said:
Plan on adding a mild stereo and amp and possibly updated headlights and led bulbs.
Click to expand...

Then you don't need that alternator.

LED bulbs draw a lot less current and the headlights won't draw any more than the stock ones. The only extra is the stereo/amplifier. The stereo head unit won't draw more than stock... In fact probably less. Depends on the size of the amp, but it's easy to figure out using (gasp!) Ohm's law.

So.... A 300 watt amp running on 12 volts (figuring the voltage low) gives you a 25 amp draw. That's not all that much... That's also when you are running the volume up... So at normal listening levels, you aren't drawing that much.

IMHO, I'd go with 50-60 amp alternator, do the ammeter bypass, run a power cable for the amp from the starter or directly from the battery. My car is basically set up this way. I have a powered sub and a 4 channel Polk Audio amp and I have no problems.

There's nothing wrong with using the 110 amp alternator.... The alternator will only put out what it needs and that's all. It's just not needed.

Yeah I am thinking the same type of stereo just a little something...this gal is a hot rod not a lowrider. Thank you for your help.

Cortez said:
Has anyone upgraded their alternator to the Mopar 110 Amp Alternator and if so can you wire it up the same as stock or do you have to upgrade the wiring?
Click to expand...

Installation article of this alternator is here: Gallery: Vying For Voltage With A Mopar 110-Amp One-Wire Alternator - Mopar Connection Magazine | A comprehensive daily resource for Mopar enthusiast news, features and the latest Mopar tech
You must log in or register to reply here.

Anyone Ever Rebuild a PowerMaster Alternator?