Having planned THIS move for several years anyway, my hopes that a new pusher fan would suffice to keep Gertrude running cool inspired me to go ahead, replace the cheap NAPA alternator with the squirrely bearings, upgrade the wiring, and pop a new pusher fan on the front of the undersized radiator for good measure. Those of you who fret about bypassing ammeters now have another method, the "Morris Bypass" to consider too. 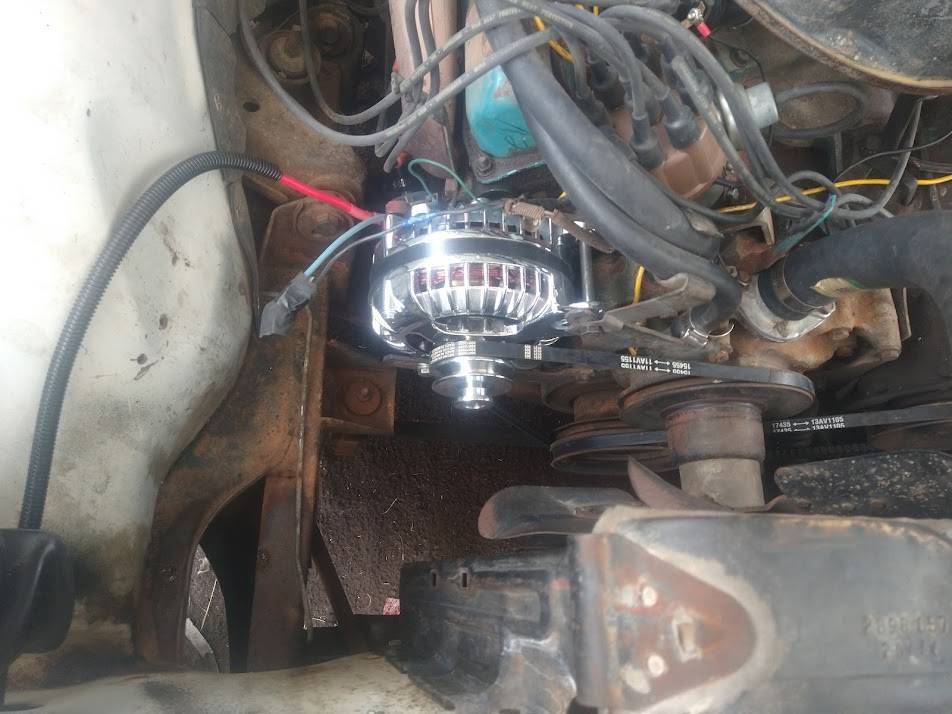 Pretty thing, ain't it? Note the 2 wires currently on the charging stud. This temporary arrangement is Phase 1 of the Morris Bypass. I ran a #8 AWG welding wire directly to the + post on the battery around the front of the radiator yoke in the 3/8 inch split loom. BUT, since I hadn't time enough just yet to clear out the rubbishy #12AWG charging wire from the dash, I had to protect it as best I may with some more fusible link wire. I hated using it fo9r this, but the stuff melts quicker than straight copper. I also still have the #10AWG battery lead from the starter relay, which is protected by a #14 AWG fusible link from Ma Par, at the bulkhead connector. This, like that ridiculous 12 gauge charging lead, is due for elimination this coming week, and both will be replaced by a nice 8 gauge welding wire running straight into the dash, where it will be lugged to the now lugged together charging lead and battery lead that were on the ammeter, which has been completely disconnected. I normally place all my fusible links right by the battery, which makes it easy to see them and replace them if needed. 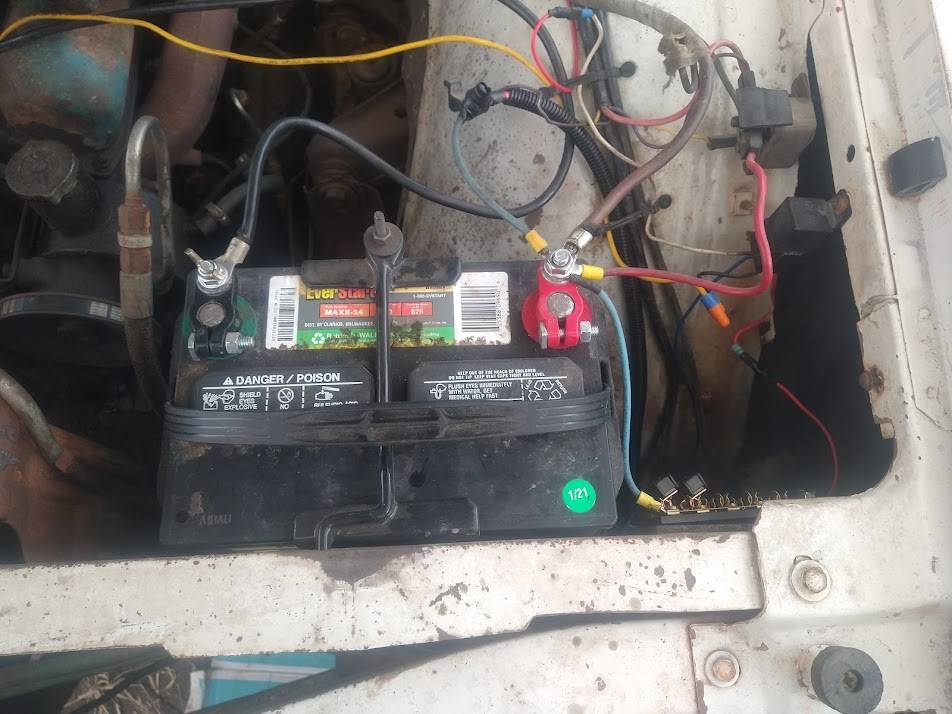 Note the 2 fusible links now attached via ring terminals to the marine battery terminal. Both measured just 6 inches long before stripping and terminating. The new fuseblock, visible on the lower right, has a nice plastic lid to place over it, protecting that brass bus and the circuits from random conductors falling on them. I installed a pair of 30A breakers on the left for the headlight circuits, TBA.

The new pusher is fed from the 30A fused circuit on the far right. Note the yellow lead running from the 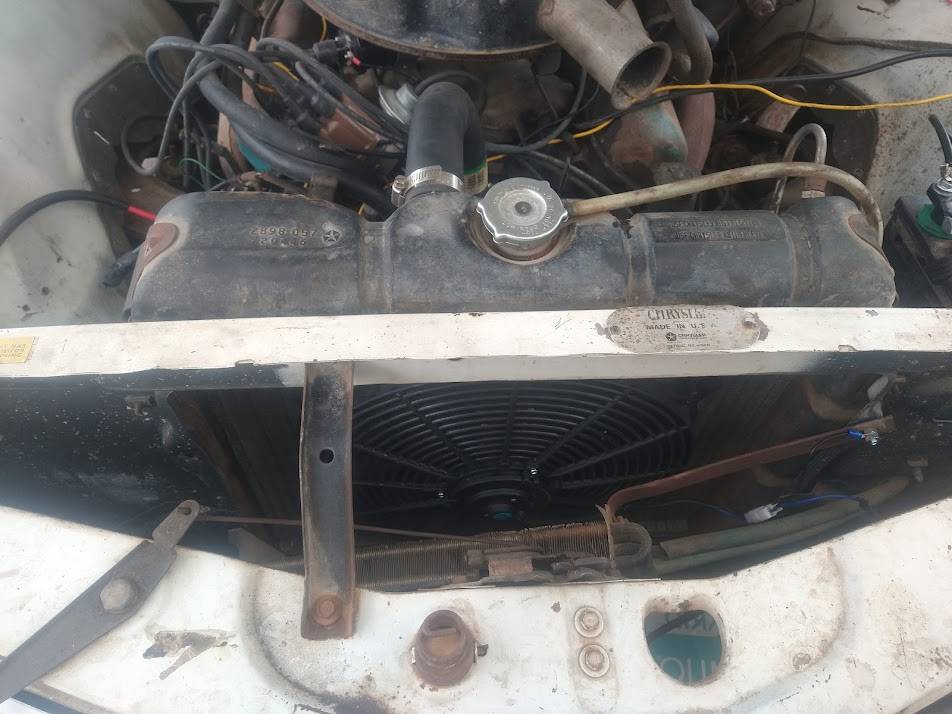 water pump to the fan relay. I use a 200F thermostatic switch, 1/8 inch NPT. This works well. I'll put a toggle switch on this switched ground soon too.
J

I have an electric fan too. The only issue I've found is it runs whenever the key is on and the temp is hot enough. Doesn't help with starting to have a ~30 amp load active while trying to start the engine. I am planning on adding a relay that will disable the fan enable when the starter is engaged. Otherwise the fan works great. My efi unit says the temp is nearly constant at 201 degrees once warmed up.

Yes, the current draw on startup CAN make a crucial difference, especially with a hot motor! Since I feed the relay off the ignition switched bus in the fuseblock, I can easily place a toggle switch on the feed. OR, I can toggle the ground loop OPEN. A 3 position toggle switch will do for this sort of control.

A word of caution, install a voltmeter. I just threw a powermaster in the trash. 8 years old and started overcharging. I bought a tuffstuff 130amp that seems of better quality. Get a SPAL Fan and a temp controller, easy to wire and easy to set up!
Last edited: Dec 1, 2021
1

that fan is band aid approach

Knebel said:
A word of caution, install a voltmeter. I just threw a powermaster in the trash. 8 years old and started overcharging. I bought a tuffstuff 130amp that seems of better quality. Get a SPAL Fan and a temp controller, easy to wire and easy to set up!
Click to expand...

Will keep an eye on the system voltage, as I ALWAYS use voltmeters to monitor the charging system. It runs up to ~14.8 VDC when unloaded by stuff like the heater fan, wipers, headlights or the cooling fan.

I happily report that I ditched the 7 blade chopper hanging on the water pump for this winter, rather than load the engine, make for prolonged warm-ups and such. NOW, with a sound engine and radiator, the electric only kicks on when I'm in slow moving traffic, which is what I got it for. A GOOD radiator makes an IMMENSE difference! In this, the current "supply chain crisis" actually did me a big favor, forcing me to rehabilitate the 2524984 radiator I had stored away when it got too leaky. Had it rodded out, and patched up for $180 which certainly runs less than even the abominably BAD CHUMPion radiators.

Yes, copper has become the most cost effective metal for engine cooling again! Given certain nasty practices from Eastasia, it likely will remain so for the foreseeable future.

Cheaper and more effective than shrouds. I've now used both, and know what delivers the best cooling for the dollar.
J

Knebel said:
A word of caution, install a voltmeter. I just threw a powermaster in the trash. 8 years old and started overcharging. I bought a tuffstuff 130amp that seems of better quality. Get a SPAL Fan and a temp controller, easy to wire and easy to set up!
Click to expand...

I believe the regulator is mounted externally on the back of the alternator. It should be possible to replace it if necessary instead of tossing the expensive alternator.

John Kirby said:
I believe the regulator is mounted externally on the back of the alternator. It should be possible to replace it if necessary instead of tossing the expensive alternator.
Click to expand...

That depends entirely on whether its a "one wire" alternator of not. Plenty PowerMaster alternators and Tuff Stuff too are made for external regulation, to better integrate into the Old Mopar wiring. I prefer it thus. One can obtain high quality regulators more easily when they're not packaged with the alternator. Its important to wire the field well when using external regulators, especially on a higher current alternator. Undersize field wires from an OLD regulator can screw up the alternator. Upsize the primary wire from the reg to the field by a couple, to wit: from #16AWG to #14AWG and cruise without worry.
You must log in or register to reply here.