1971 Chrysler 300 HT Coupe, C-Body, 440 cui BB (orig. engine/dry seized) 335 HP, 460 ft lb torque, Autom, One of the biggest Muscle Cars that Chrysler had in 1971, pretty 'rare' car - only 7256 units ever built. The top of the line version was the "300 HURST". only 500 units ever built. This car is fully loaded with power windows, center console shifter, hide away headlights, bucket seats etc.. Car needs restauration, its not soo bad for rust, but rear quarters need attention and trunk floor needs somes patches. Floor pans look solid. Have some extra body panels that I can possible include. This car is well worth the effort to restore it. I m testing the waters if anyone is interested in this rare muscle car. Not desperate to sell - rude offers will be ignored. Located in the Westlock Area. 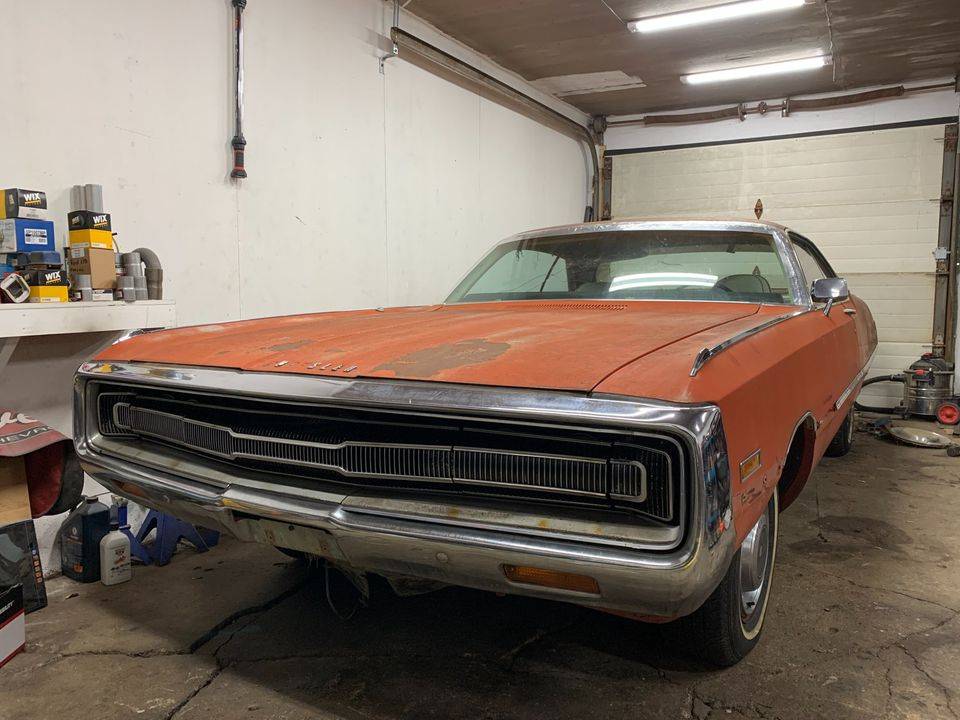 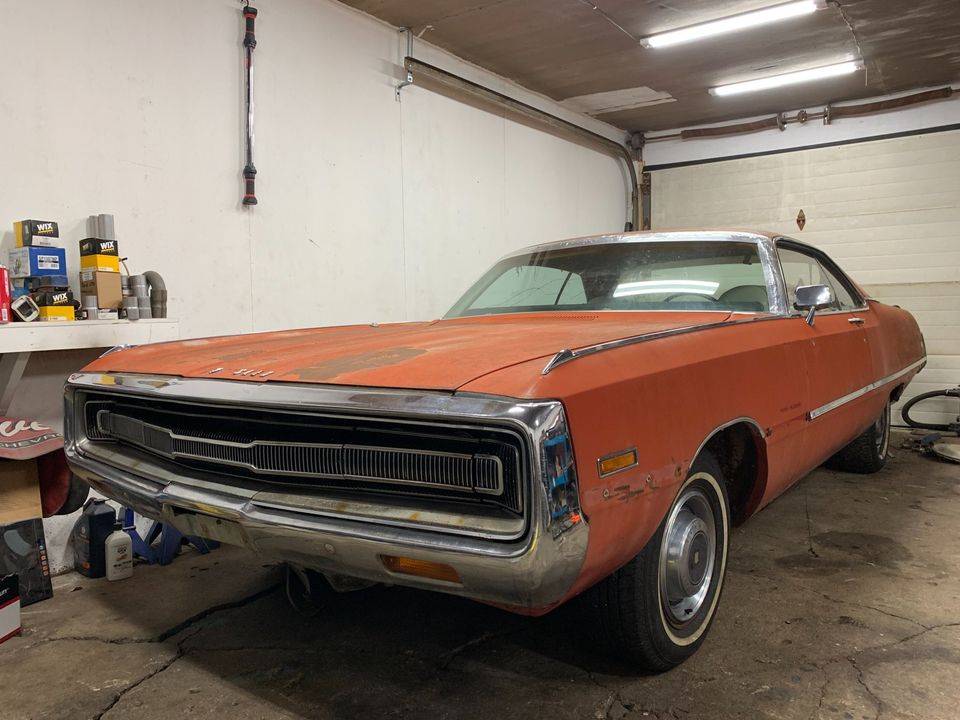 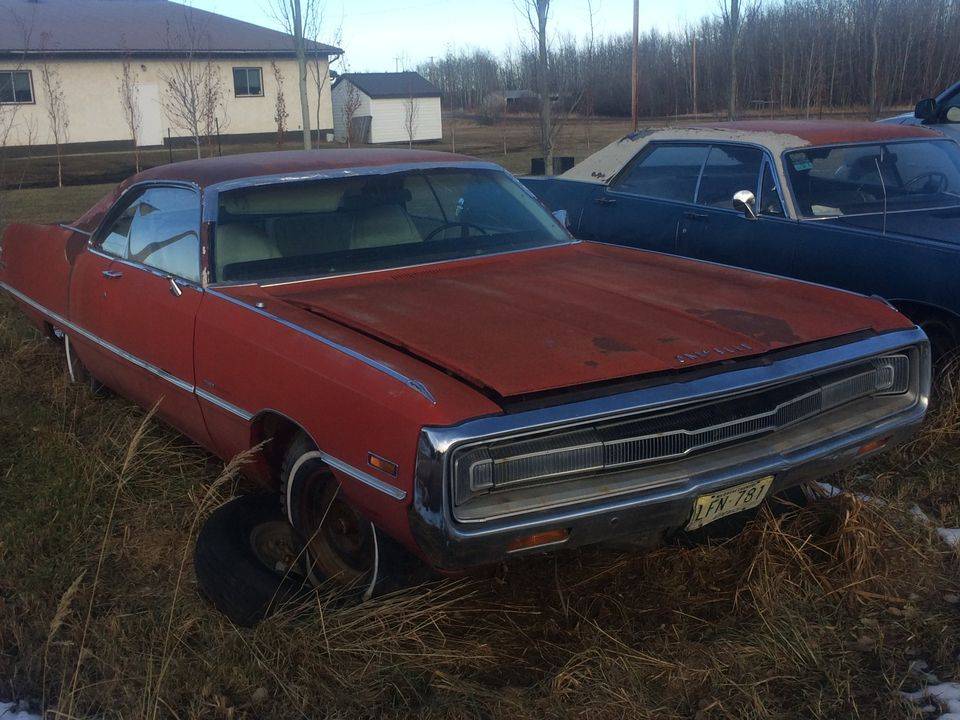 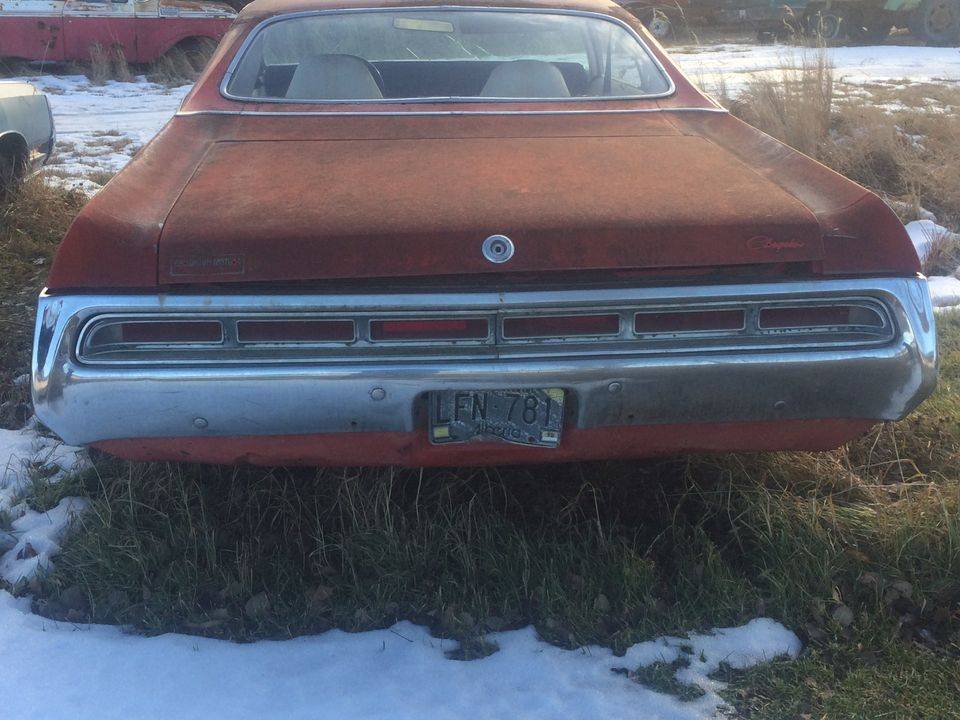 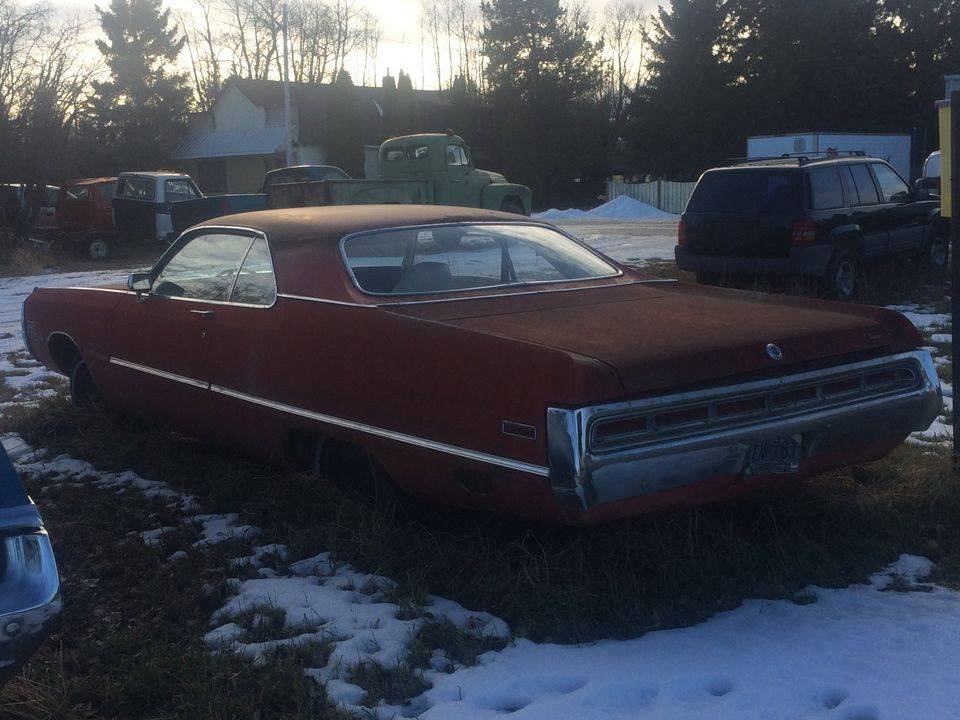 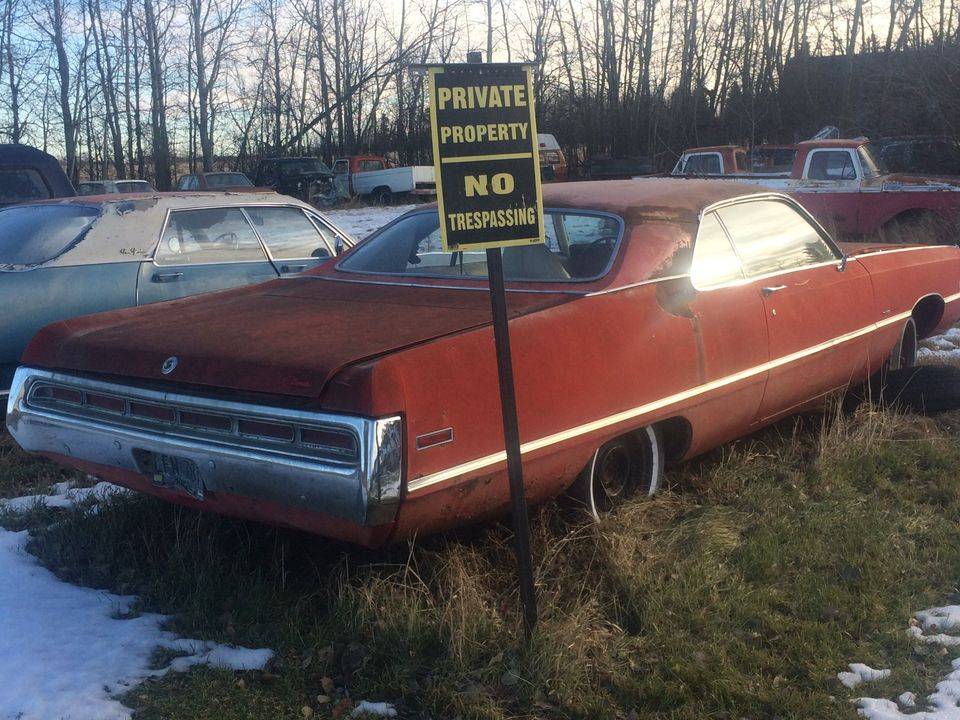 Definitely not a Buff n Flip.

No AC. Why don't Canadians believe in AC?

It does look like it has the rear heat option that is quite rare, but not maybe so rare up in Canada.

Samplingman said:
No AC. Why don't Canadians believe in AC?
Click to expand...

Because it more cold than warm / hot.. don't need it. and LOW humidity as well.

75LandYacht said:
Because it more cold than warm / hot.. don't need it. and LOW humidity as well.
Click to expand...

I think he was being facetious...

I did get a body code plate photo for this car from the seller as shown below: 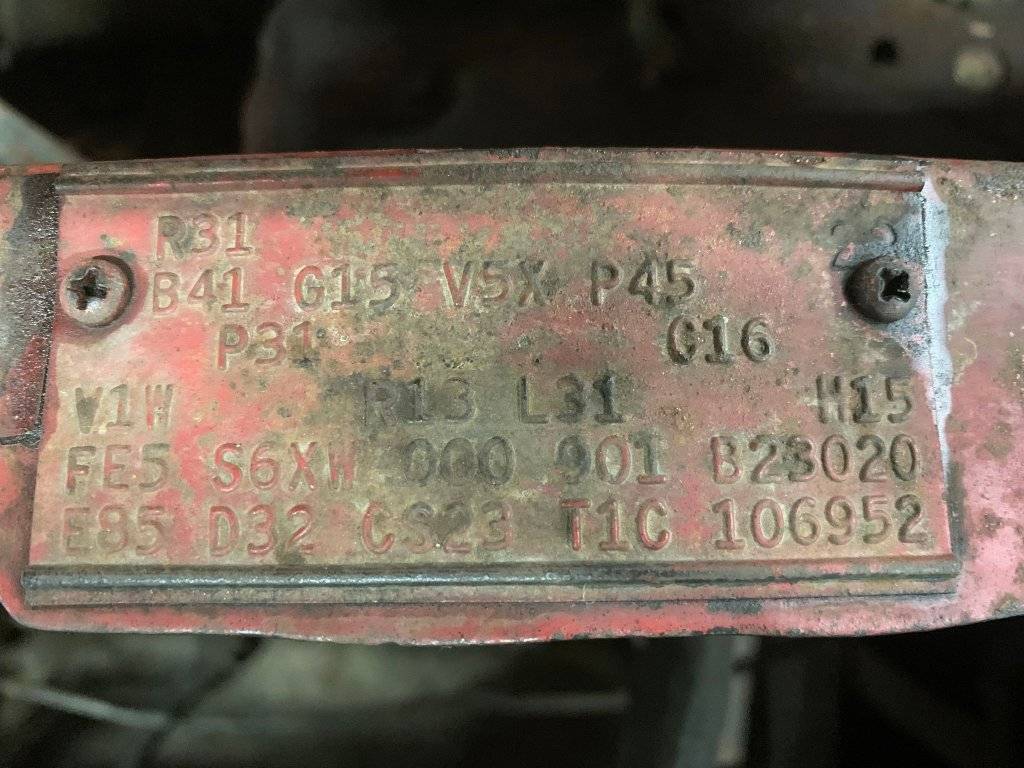 The car is Rallye red with a white vinyl top originally.

I also was able to discuss some details with the seller who is an older gentleman who is the best communicator I have yet encountered on Facebook ever. Very responsive and very up front and honest. He would like to see this car saved and going to a good owner more than anything since he really likes it but is up there in age and won't be able to do the saving since he has other vehicles to fix up ahead of this one (he also has some mid 60s Cadillacs and some other Chrysler C bodies). So he would entertain reasonable offers to buy it.

The odometer reads some 95K miles, the area around the rear window is surprisingly good and the tape around the front window was to prevent water leaks from some more minor rust bubbles around the windshield that would need attention. The rest of the roof is very clean with no bubbles at all. The lower quarters have some rust but overall the car does not seem to be that bad in terms of rust. The car hasn't run in 46 years so some maintenance would be needed but he did feel strongly that the engine would free up relatively easy since he used a boroscope placed down a cylinder through a spark plug hole and the bore looked very good. I do have some additional photos that I could send to anyone who might be interested in saving this one. Red with a white bucket seat interior and white vinyl top should look really striking when fixed up.

Since I have quite a few 71 coupes already, I am not going to take on this one as well but for someone looking for a reasonable project, this one might well be worth considering.

If you have interest, let me know and I can send more of the photos he provided me or if I get more time after completing my taxes soon, I will just post them later in this link.
Last edited: Mar 8, 2022

Thank you Steve!
I'm not on board, but another interesting fact is that this Coupe is one of the first ever build in the '71 model year.
I also really like this color combination!
F

300L said:
Thank you Steve!
I'm not on board, but another interesting fact is that this Coupe is one of the first ever build in the '71 model year.
I also really like this color combination!
Click to expand...

why do you think it is one of the first ones?
SPD is first september not first of august.
sequence is 1c106952

In relation to the entire model year, Carsten.

"One of the first" was probably not quite right in this context
Last edited: Mar 8, 2022

I think we should just go with "early build".
M

What the asking price? I just bought one same color combo out of Arkansas last month. Would not mine having another.
G

Moparmurph said:
What the asking price? I just bought one same color combo out of Arkansas last month. Would not mine having another.
Click to expand...

The one at the closed out dealership auction? I saw that one but it was ruff ruff.
M

It actually only needs floors, trunk, and sail panel everything else looks solid
M

gts95 said:
The one at the closed out dealership auction? I saw that one but it was ruff ruff.
Click to expand...

@Moparmurph
do you have a thread on the FE5 car yet? We would love to see the details about the car.
Looked like a cool car on the for sale ad. Let's see some details!!

My understanding from the seller was that he was able to sell his FE5 300 up in Canada along with another car he had a few weeks ago now.

For those of us in the U.S., with the recent changes in Canada's laws to help retain some of Canada's history in Canada rather than let it go across the border to the U.S., trying to import that car to the U.S. would likely be denied.

FB Description
For Sale ! 1971 Chrysler 300 Coupe, 440cui BB Autom, full load, console shifter, hide away headlights, power windows, bucket seats, super rare color combination red/ white vinyl roof. car is solid, trunk floor needs some minor patches, floor pan's are also solid with a few lill tiny holes in it. rockers are solid, frame rails are solid. Car is in need of restauration. The orig 440 cui in the car is seized. Rear quarter panels need work. 300's are raising in value fast ! Car is located south of Westlock, about 35 mins far from St Albert. Price: 3950 $ Selling a few of my projects cuz I m not gonna live forever to fix them all. NOT desperate to sell - NO NONSENS !! If you are serious - come and have a look yourself instead of 1 Mio questions via messenger. 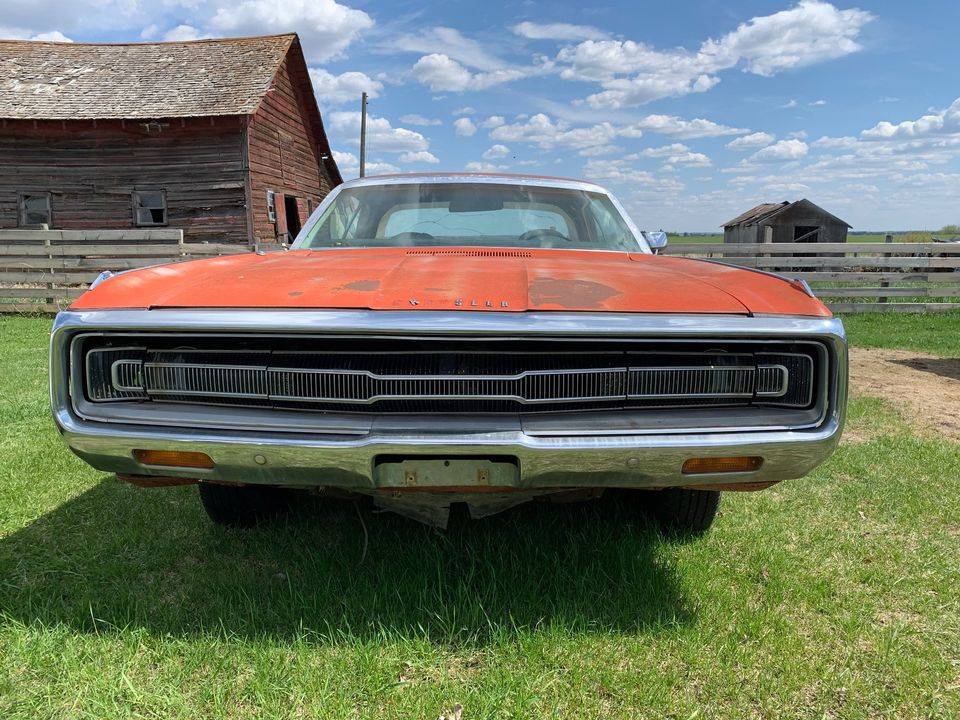 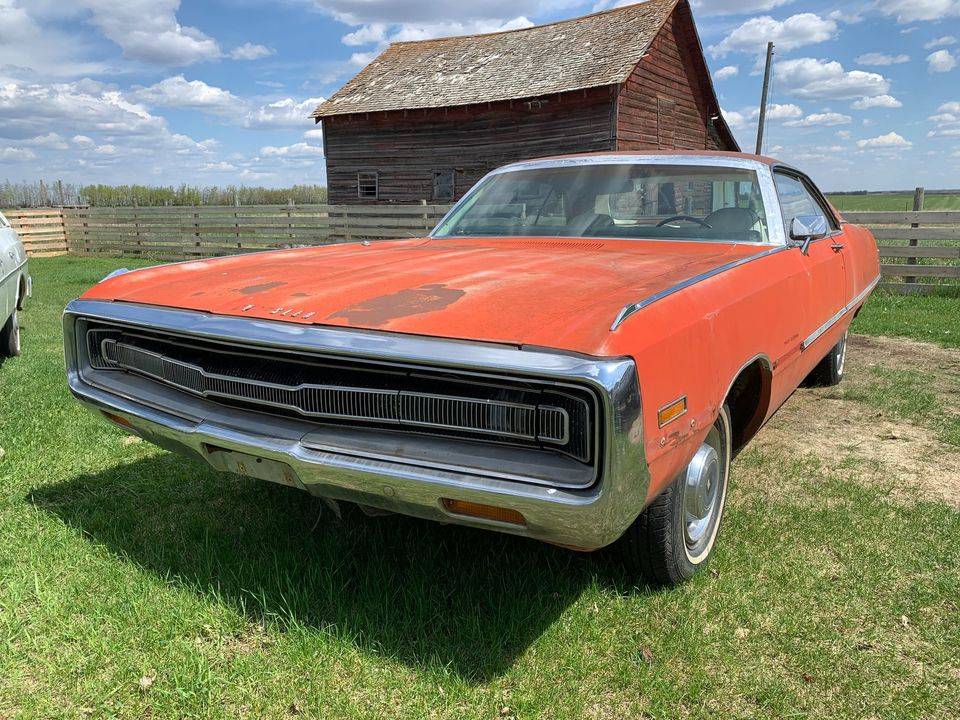 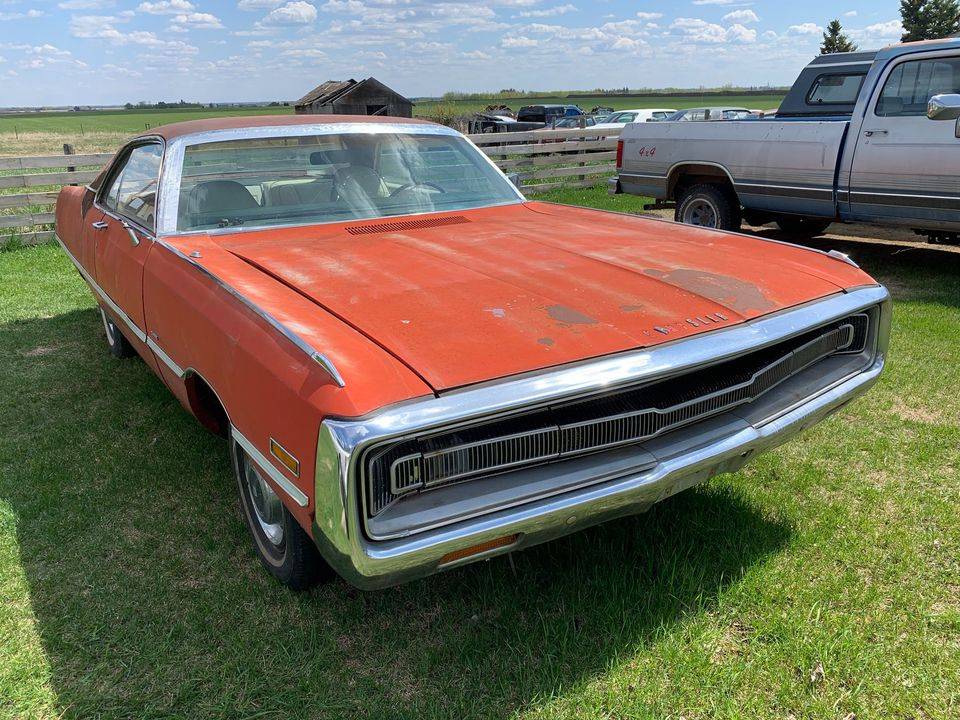 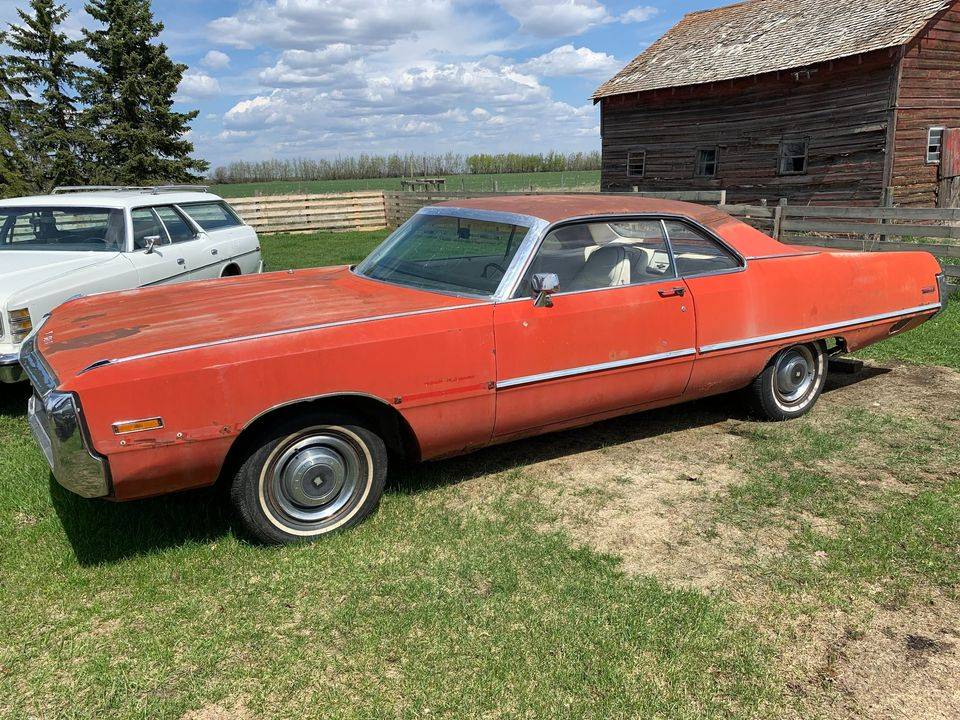 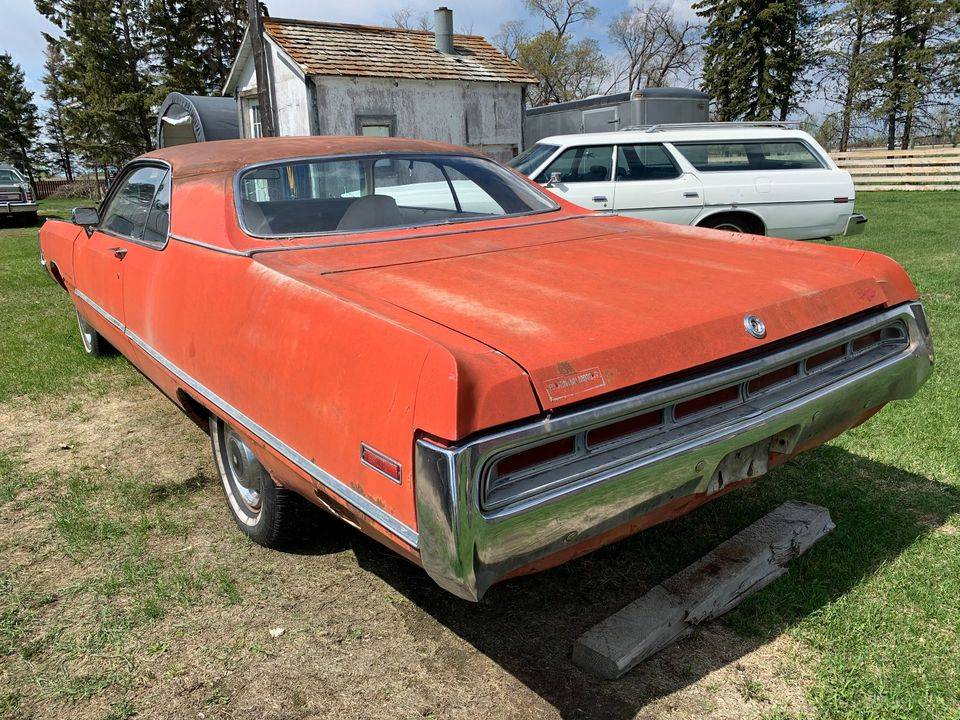 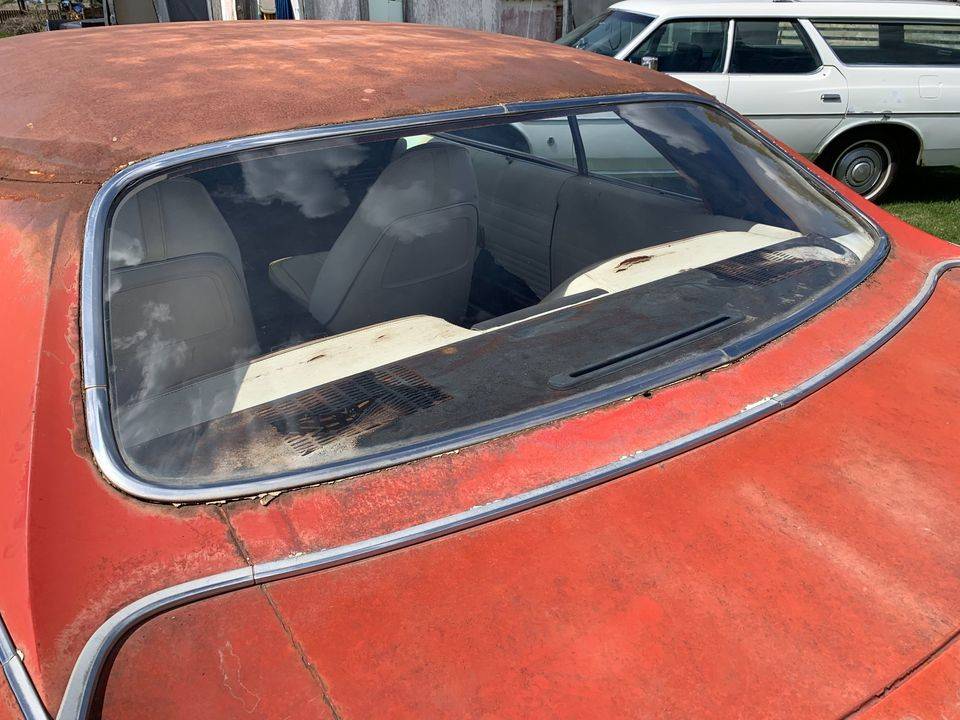 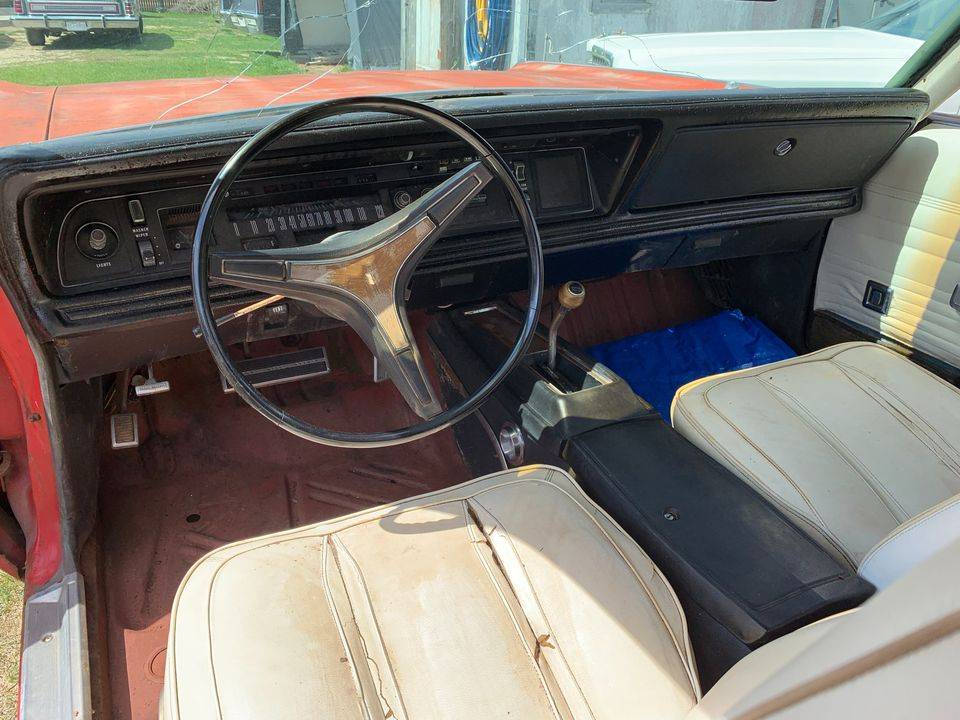 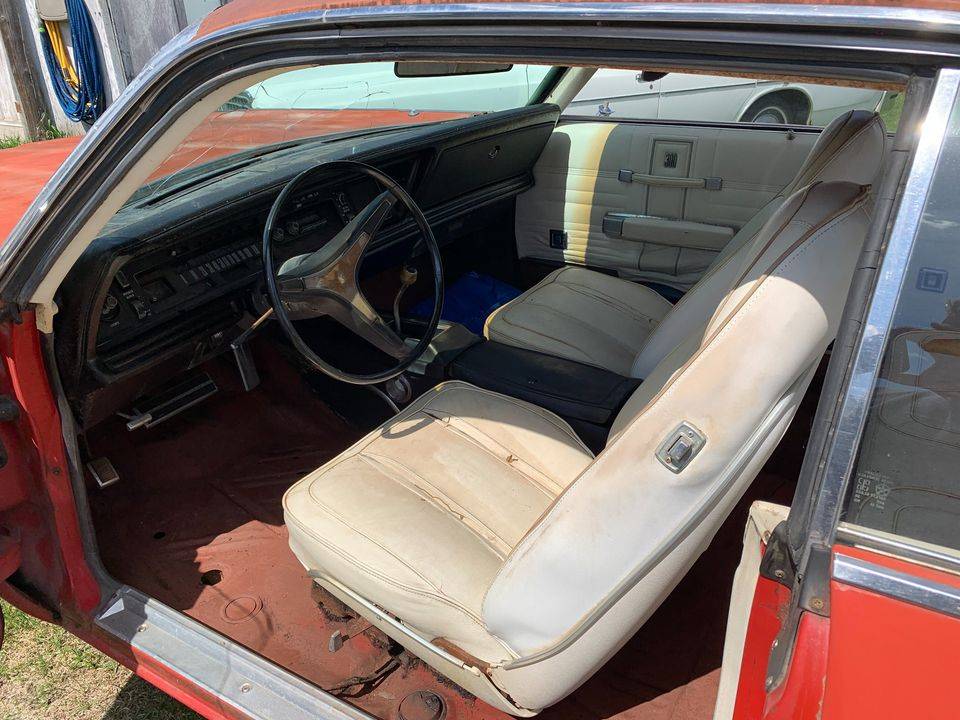 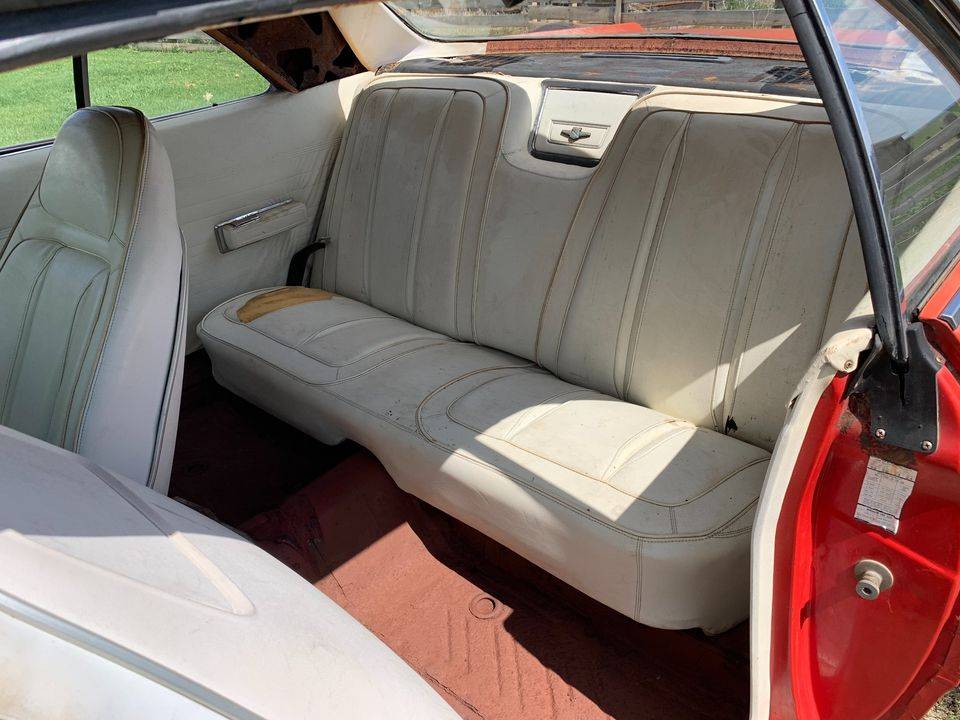 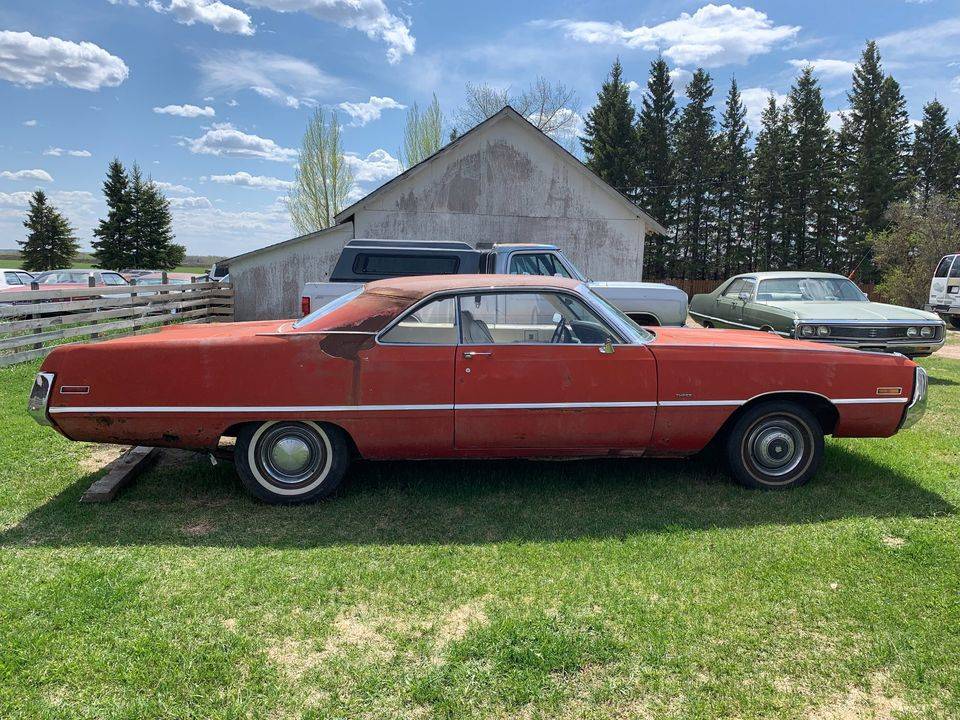