Does anybody have a phantom wishlist or particular C body variation that you think should have been made or would like to see done as a one off?
I seem to think about these things quite a bit. If I ever had that kind of time I would like to create one. But the factory versions I have take more time than I can give as is.

I would like to hear what others think and I'm not just talking about slabs but if a guy was going to build one , the slabs have an advantage of flat side glass.

Off the top of my head because I have a 65 Newp 4dr sedan would of course be a 2 door sedan.
Which may not be my first choice but I would like to see it anyway. The other one I was thinking was fuselage 4dr hard top wagon. Specifically a 72 or 73 Fury.
Or a slab Ute maybe a 68 Fury or a 67 in powder blue for some reason in my head anyway.
Just a day dream. I have seen many done with gm stuff over the years but what C bodies can we come up with?
Maybe somebody thinks they missed the ball by not producing something particular?

Not a slab, a Fuselage Imperial Convertible has always been on my mind. There were a couple attempts that got me thinking, but it's way too big a project for me and there are cars that I want more.
D

I’ll go with the minimum here: U-code 1971 Polara or Monaco 2dr hardtop in GC8. White buckets. Does not matter if it has R/T badges. 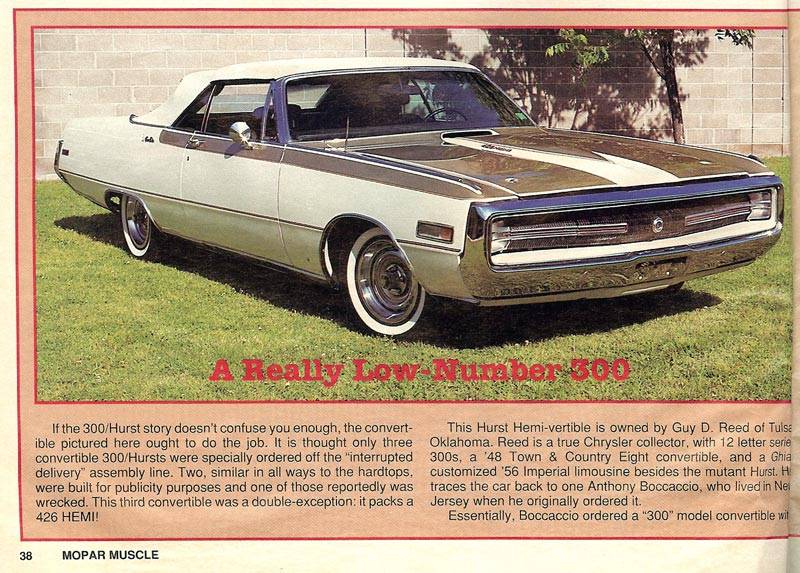 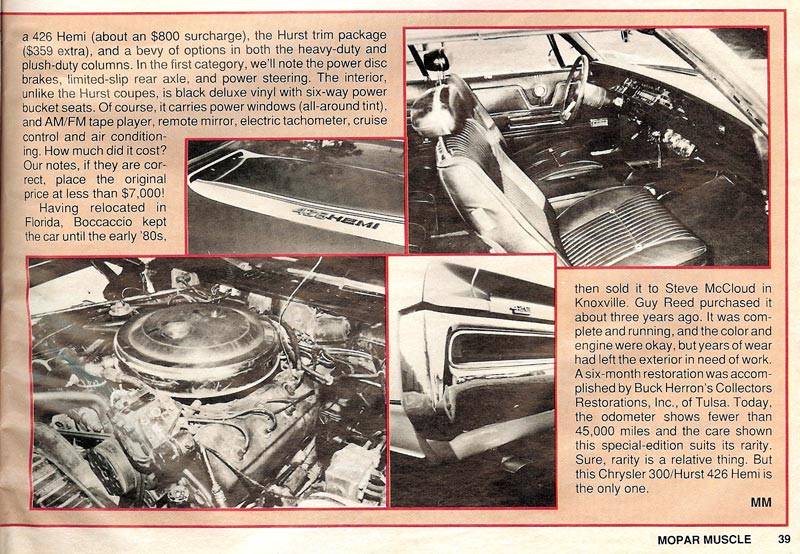 I'd like to see a 68 Chrysler T/C done as a true big door 2dr wagon, and not shortening the wheel base either. Would require a lot of work with the rear doors/widows to make it look "right".

thrashingcows said:
I'd like to see a 68 Chrysler T/C done as a true big door 2dr wagon, and not shortening the wheel base either. Would require a lot of work with the rear doors/widows to make it look "right".
Click to expand...

Yea you would either have a small middle window or best would be lengthen rear glass.
No easy button for the doors. Either put frames on the two door version or stretch a standard door.
There was a guy around here with a 66-67
chevy II wagon with the long doors and stretched glass. Great proportions.

The T&C would be a neat 4dr hard top especially if you could thin the transition to the rear glass.
The whole side would be like one big window.

Yea I agree. 66 was a rip off with no letter car. And to make up for it a hemi would be a good start.

Well now that Im in a social justice warrior mood.. To settle the controversy over the 65 300L being a real letter car or not... Max Wedge and a 4spd ! STFU HIPPY and hold on.

There will be ice blowing out of the ac ducts when I hit red line.

Rustyrodknocker said:
Well now that Im in a social justice warrior mood.. To settle the controversy over the 65 300L being a real letter car or not... Max Wedge and a 4spd ! STFU HIPPY and hold on.

There will be ice blowing out of the ac ducts when I hit red line.
Click to expand...

Wish I could find my drawing that I did many years ago of a 71 Sport Suburban sedan delivery.
C

I like the hardtop wagons of the earlier 1960s, but they probably need MORE underbody strength compared to even a convertible, possibly?

A 4-dr Imperial fuselage "parade car" option might be neat, but would likely end up VERY heavy due to the additional underbody supports and such. Which would make a '64-'66 Imperial conv parade car much more doable.

The "440 Six-Pack HEMI" which some car cruise people seem to remember happening? LOL

I've toyed around with the idea of putting a 440 six pack in my regular 4 door 68 Newport, if I ever found one, and wondering how good that would actually work for fuel economy and power balance compared to a regular 4 barrel. Although as far as I understand it a properly jetted 4 barrel is just as effective as a 6 pack or dual quad setup.
C

When 2x4, 3x2, or 8x1 induction systems were more popular in the middle 1950s+, the carbs used were very small in total cfm, individually. With many 4bbls being closer to 400cfm than not, until the earlier 1960s when 2x4 systems became more popular. As camshaft profiles became "wilder" and "milder" at the same time, for a normal "street engine". Usually, anything more than 800cfm is not really needed, UNLESS the cam is radical and the exhaust system/induction system is all tuned to work together with the greater airflow. Intake manifolding "science" is much better now, such that a single 780cfm Holley can yield as much, if not more, power than the 2x4 systems, without all of the issues with progressive throttle linkages and such.

The 3x2 systems can be maintenance/labor intensive should anything go wrong, by observation. Like the center 2bbl carb popping a power valve upon a start-up spit-back or back-fire.

In the 1950s+, Pontiac would put their "Tri-Power" engines in any model of car they built, seemingly. I recall one story about an older buyer not really wanting that engine, but the salesperson claimed it had "Three economical 2bbl carbs on it" in order to get the sale done. Yet the best 3x2 intake, related to actual fuel distribution, might be a smaller-plenum shoebox tunnel ram intake?

With the ultimate induction system of the later 1960s being 4x2 Weber carbs. With each throttle bore feeding ONE cylinder. With the main issue for daily driving being getting filtered air into the carbs!

I have a soft spot for wagons and love hardtops, so a Fuselage HT wagon would be my dream C-Body. I managed to build one - with photoshop at least. 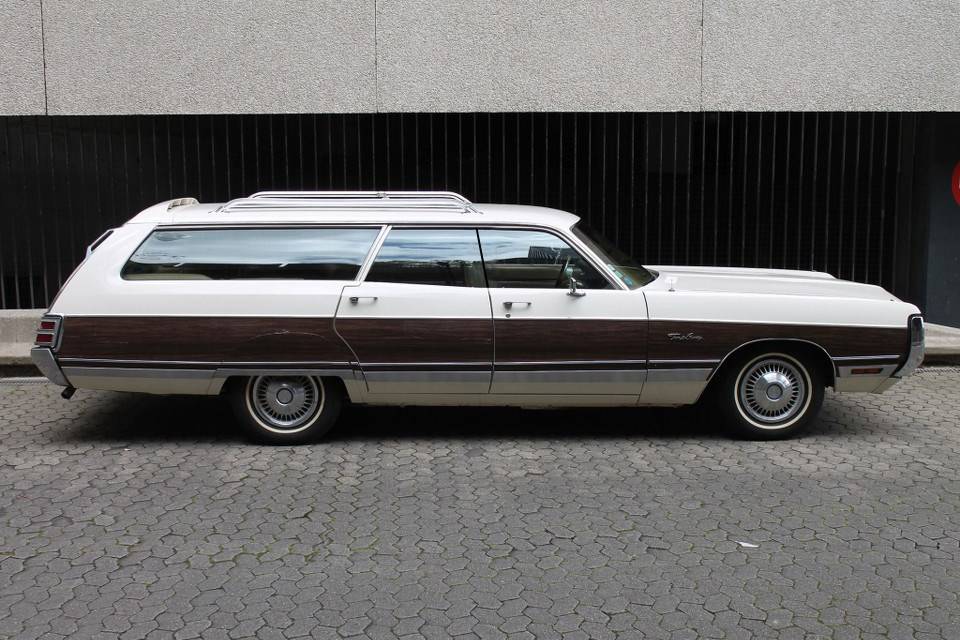 Stop spreading old wives tales about six paks and their poor reliability.
In reality a six pak is very fuel efficient, will out run it's 4bbl equal and are very very reliable as long as there is not an idiot on the other end of the screwdriver and wrench.

Tom Hoover - remember him? - said many times at the seminars he used to give - that the six pak was efficient, powerful and worked better on a hemi than 2-4's. Not a wives tale, lot's of folks were at those seminars back in the 80's. There is still video in peoples possession from back then...and no you won't see it on YT. He also talked about the 4bbl intake for the 72 hemi engine and the research they did on the 72 hemi. That manifold actually exists and could be purchased from direct connection. It even has a provision for heat tubes for manifold heat...

What about that 300 rag top with the hemi? How did that get in there?

I'm sure the engineering and cost would be ridiculous, but the basic dimensions look like they would work, and now there's a reason for the vinyl covered C pillars that already look like separate panels.