How do I find out what the std ride height is and how do I measure the ride hight in the rear accurately?

I am looking at leafsprings and can choose std lower/higher...I just have no clue what to choose so my car wont look all jacked up high in the back!? I would like to maintain where its at now but have new firm springs... 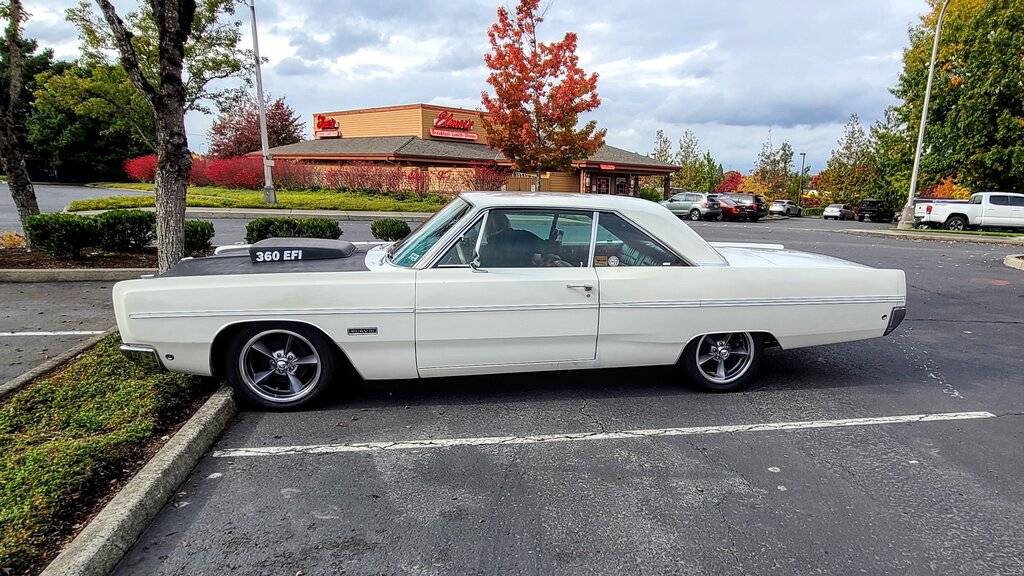 Find a flat, level surface and get down beside the car. Note the pinch weld rib at the base of the rocker. Measure from the bottom of the rib to the ground at the front and rear of the rocker. These are your base numbers and they should both be the same if the car is riding level like it is supposed to. Yours looks pretty close the way it is.

Look at the sales brochures and such might be a place to start. Rocker panel is parallel to the flat road surfWhereace is the key thing. Provided the front end measurements are correct to start with.

The factory method of setting the front end ride height can be a bit complicated, by observation. But that's where to start. Once you have that set correctly, per the FSM, then park the car on a known flat surface, walk back about 30' or so, and see if the car is level front to rear. If not, then you can go from there.

To be more precise, you can have the car on a drive-on alignment rack and take measurements off of the rocker panel itself.

If you desire "level but firmer", then opt for the normal height HD suspension option.

Where ever you end up with the new springs and correct front ride height, be sure to re-check the aim of your headlights.

Knebel said:
How do I find out what the std ride height is and how do I measure the ride hight in the rear accurately?

I am looking at leafsprings and can choose std lower/higher...I just have no clue what to choose so my car wont look all jacked up high in the back!? I would like to maintain where its at now but have new firm springs...

Very good. So measuring to the pinchweld right infront of the wheelwell is the key? I should be finding the number for std height this in the FSM? Then go from there and see how my measurement is different? Currently it is a bit higher in the back because as soon as you put a person in the backseat it sags. Thats why I am looking to get new springs and ditch my airshocks for something better...
D

That is the correct place to measure for working measurements. The FSM gives a long and detailed setting of the ride height by measuring the height of several front suspension components. I always found that method to be more complicated than necessary. Torsion bars do not lose their tension unless they are cracked and at the point of failure so the front pinch weld measurement will be spot on for purposes judging the condition of the rear springs. The ride height in the FSM is an artificial number that is not good for much except the setup. Check the bushings on the rear springs and also check the packing strips between the spring leaves. Bad bushings or packing will cause the rear springs to ride low even though the spring steel itself is still viable. If the car is a 150k vehicle, it will be due for rear springs.

As a follow up, air shocks are a poor choice for the rear of a C-Body Mopar. The air shock raises the rear of the car, but you are then riding on air pressure rather than the spring. Usually this will give a sloppy/bouncy ride and the car will not be much fun to drive if it is hopping about. A set of Monroe load levelers are usually a better choice if some added capacity is needed for the rear suspension.

I suspect the reason that Chrysler used the front suspension items' relationship, rather than using body sheet metal (as many seem to like better) could well have to do with the build tolerances of the body itself . . . or ANY sheet metal back then, for that matter. As strong as those bodies tended to be, it was how they were welded togehter which determined a LOT of how the bodies ended up (sealing, windnoise, etc.) rather than just cosmetics, by observation. Certainly, there were production specs, but even those have their built-in tolerances. Which makes the front suspension items as what might be termed the most reliable way to do things.

One thing I noticed when trying to get the front end of my '67 Newport adjusted after the lower control arm pivot bushings were replaced, was that as the correct level was approached, the flat portion of the lower control arm (between the pivot and the ball joint), became more parallel to the floor surface. Too low, it sloped toward the oil pan. Too high, it sloped to the tire. When done, it should slope toward the tire a little or be completely parallel to the flat floor, by observation.

Once done, there is another measurement which might be easier to do AND see. The distance between the top of the lower control arm bumper and what it contacts. Sure, it might become a bit shorter over normal use, but it should still be reasonably the same height as when new. Easy to measure with the number of fingers that will fit in there, too, by observation. YOUR fingers rather than a "standardized finger width".

One reason the load-leveller type of shock does not tend to work on Chrysler products is that by the time the rear springs are used enough to need them, the center section (where the coils are closer together) is not strong enough to raise anything back to where it should be, so that puts the outer (wider spaced) coils into play. Which also keeps the rear end level lower than desired. End result, very little additional rise, which makes air shocks a better deal for those situations, as a more temporary fix. BUT a fix that can be better tolerated, from my own experiences on the '70 DH43N and '80 Newport I have (which had seen some lighter travel trailer use by the original owners). On the DH43N, I used Gabriel Hi-Jackers with great success. Has a 1.375 HD shock in them, so they ride firmer than the 1" piston in the Monroe Load-Levellers do. I liked them, personally.

Before the non-air shock operatives get too irate over my choice, consider why I did that, back in 1975. At that time, any spring work was usually limited to trucks with special needs for their job function, rather than cars. Getting new springs from Chrysler was not an option either, but would have been too expensive if it had been. Not really trusting the spring shops to "get it right", I opted for the Gabriels (which had the air bag protected by the shock housing extension). Certainly, the only other option would have been the AirLift air bags for the rear axle, which would have needed more engineering to make them work (although some successful drag racers had used them to pre-load their chassis for better quarter mile performance (more air in the rh bag than the lh bag on non-SureGrip cars, for example). So the air shocks made sense to me and made the car handle almost like it had a rear sway bar on it, by observation. Just 60psi was all it needed to level the rocker panels, with the minimum being 30psi to keep the bag from wrinkeling. Basically, no detrimental affects to the TorsionQuiet Ride in how I was using them.

Ok I have made a decision.

I'm replacing the pads between the leafs and the clamps first. My main concern was that I am getting some noise from the springs, especially after I have clamped the hardware for the swaybar on. If that wont do, I will have to look into purchasing a new set of leafsprings! I appreciate the knowledge and input from you guys! Thank you!
C

Knebel said:
Ok I have made a decision.

I'm replacing the pads between the leafs and the clamps first. My main concern was that I am getting some noise from the springs, especially after I have clamped the hardware for the swaybar on.
Click to expand...

Rear sway bar items clamp on the leaf springs? Pictures of such?

B and C body leaf springs