How have your experiences been with reproduction bias-ply tires?
When I get my 72 Newport back together, it will need a new set of tires. I like the ride of Hankook tires on one of my other cars, but i'm not a fan of how they look. I've been looking at Coker tires this time: 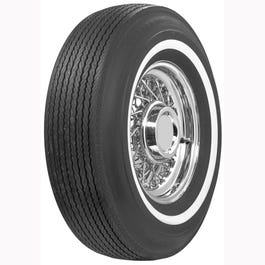 These classic BF Goodrich J78-15 bias ply whitewall tires feature a narrow 7/8 inch whitewall, fitting many popular full size and luxury cars of the 1960s and 1970s. The J78-15 size looks a little different than today's P-Metric tire sizing, but it's authentic for cars such as 1969 through 1974...

www.cokertire.com
I've never driven a car with bias tires, I am looking for comparisons between ride quality, smoothness, noise, cornering, wet weather, flats etc.
Are there any other manufacturers of original look white stripe tires?

All I can tell you is the comparison between a radial and a bias is huge.
Drove a Pontiac Bonneville with bias and I though I was riding in a buck board wagon.
Handled poorly too.

The old bias ply tires look nice on the cars they came on. The ride and handling is another thing. Bias ply tires will follow the ruts in the road and will not handle like a radial. If you plan to drive your car a lot I would go with radials. The 72 Barracuda I purchased new came with Goodyear belted tires. When I switched to radials it was like a different car.

I've driven a lot on bias tires and the difference is night and day. Radials ride better, don't flat spot, and that's not even getting into the performance side of it.

They're a much better tire, hands down.

If you want to back your car out of the trailer at car shows, and the extent of your driving is making sure it's parked straight, great, grab the radials. If you want to actually drive the car, get some radials.

I have several collector cars with both bias and radial tires. I would suggest you chart the advantages and disadvantages to both plus the pricing column. I like my bias-ply from Lucas tires. for my '59 Imperial and '62 Chrysler 300. With your car being 1972 I suspect you can choose either from the standpoint of what was on the car in that year. On my '59 this is the second set of wide whites from Lucas. The first set had no weather cracks they were just 25 years old. The second set is about 8 years old now and the most noticeable difference is not "flat spots" as the car can sit awhile. IMHO radials have more of a tendency to blow out as they get older and bias-ply might peel the tread section off but does not blow out. The price might trump all of the issues mentioned above. A radial in your size would be about $100 plus, white a bias-ply are close to double that price. Of course, if the car is not driven often you could check FB Marketplace and craigslist, try typing size, and the verbiage "whitewall tires". Below is a set I found about four years ago on Craigslist as he bought a collector car with two sets of tires.

Actually, if it's for that '72 in your pic, that car would have come with bias/belted tires originally.

I suspect that the tires in the link are actually bias/belted, but I see nothing to prove that.

Bias/belted would be preferred, but I've yet to find any. I'm not partial to bias ply, I just like the look of them better. The car has had the same set of Mastercraft tires on it for 6 years. They look okay, but the traction is on the brink of death in the rain. I may just have to find the closest to original looking radial.

I am waiting for my set of Nexen AH5 White walls.

If you are changing the 6yr old tires because they handle poorly, IMHO you need radials.

I am a big fan of the Hankooks. I have the H724 on several of my cars, and while they are very comfortable tires that handle decently, their looks are not perfect (sidewall scripts, look bit deflated). The new Hankook H735 (Kinergy ST) look much better and are an improvement over the previous H724 Optimo. I bought the H735 for my 1970 300 'vert, and though I have only put on a couple of hundred miles on them, I am very happy. In case that matters to you, the H735 are also made here in the good old USA.
C

In '72, Chryslers came with bias-belted Goodyears as standard equipment. They were not stellar-handling tires, but were better than bias-ply tires, by observation.

On our '66 Newport Town Sedan, it had Goodyear Custom Power Cushion 8.55x14 whtiewalls. Tread was about 5.25" wide, which probably helped that earlier tread design do decently well in the rain. Being polyester cord, they rode well and handled well. Kept the air pressure at 28-30psi all of the time, too. Treadwear ended up being close to 40K miles.

Replaced them with BFG Silvertown Belteds in H78-14. The ride and handling increased a big lot. Smoother was one main difference.

Personally, I'm not a big fan of Hankook's sidewall graphics, BUT they ARE available in whitewall (correct for '72 width) and are AFFORDABLE. A KEY consideration for a car that will be driven a good bit rather than not.

I really liked the way the '66 drove and handled with both the OEM Goodyear bias-ply tires and the later belted BFGs, but never did put radials on it back then. But by '72, the OEM Goodyear PolyGlas radials had yet to appear. On the C-bodies I drove with then, they were good. Probably better than what was optional in '72 a bit, too, I suspect.

The older bias-ply tires would seemingly last forever. In our area, old car tires ended up on grain drills and such, as long as they'd hold air. Many (incl. BFG) claim that a radial over 6 years old is on borrowed time, but in the fine print of the Hankook Master Catalog, I believe they state their tires can go 10 years.

Back when the cars were "just used cars" and many tires would last 40K miles with decent care, my orientation was to not over-spend on tires, but not under-spend either. Usually figuring on new tires every 3-4 years of normal use (up to about 50K miles), back then. Which usually meant bias-belted tires. Back when radials were still "too expensive" for normal use. Although Ford had Michelins as an option on many of their larger cars.

The "over-spend" would be putting Michelins on a vehicle which only went to the grocery store, church on Sunday, and maybe out to eat every so often. Accumulating about 7k miles year, but the owner had "the best" tires, too. Otherwise, a mid-line brand tire would have lasted well long enough to wear down to about 50% tread before the car was traded-in or became "an estate car". Only thing was that I observed that "M" brand of tires seemed to be known for "weather cracking" of the sidewalls after a few years of time. BTAIM

In reality, you're not going to find any modern radials which might have the complete look (in whitewall) of the OEM Goodyears. But what's out there now is probably much better than what the '72 radials were, too. Do the Hankook Kinergy whitewalls and enjoy driving the car. DO keep the air pressure about 32/30 f/r (cold).

Enjoy !
CBODY67
You must log in or register to reply here.

Feb 20, 2021
USSMOPAR
U
F
Anyone running bias-ply reproduction tires on their C?
2