G'Day Fellas,
Finally got The "Beast" back from the Panel beater after 14 Months.
Some Might Think I Would Complain BUT, He has done Exactly What I wanted in the Repair.
So I am a Happy Chappy.
Now I have to Start on the Million other Jobs that need Doing.
You Fellas may be able to Assist.
I'm Looking for Pictures of "Low Mileage Cars" so I can Figure exactly what sort of Ride Height I should be Looking at. (69 Fury Sedan, 383 4BBL)
Maybe Original Sales Pictures Whatever so I can sort out what needs to be done.
Every Fuselage I have owned had Saggy Baggy Rears & Pump Up Shocks Don't Really Work, So I'm looking in Other Directions.
Thanks in Advance, Any Suggestions / Solutions Appreciated.
Tony.M

First step get your front height set per the service manual. Then as you are likely finding the rear can really vary. Sometimes from preference, sometimes from HD and trailering packages, and as you are finding old age.
Here is link to a discussion that talks about the issue. Be warned, I don’t think there is any direct consensus on the “proper” rear height.
First two pages seem to talk air shocks, but after that nonsense is out of the way, it gets deeper into height and spring packs.
Rear Shocks and Springs: One Day?
C

When the front suspension height it correct, the look for how parallel the rocker panel is with the shop/road surface. This will also mean that an imaginary line extended from the bottom of the rocker panel (or possibly the rocker panel molding?) forward and rearward will intersect the wheel cover/wheel in the same place. That's how everything was done in the 1980s and back (for all makes). Past the front end adjustment, let the rest be by visual, rather than numbers per se.

The referenced picture is the only one I have saved that does not have a lot of "perspective" in the set-up. I believe it belongs to a member here, too. But you can see where that imaginary line I mentioned might cross the various aspects of the wheels, as I mentioned.

For using sales brochures, it is necessary to make sure the cars are photographed rather thanw being "drawn" as drawn art can be manipulated in several ways to accentuate certain aspects of the vehicle's shape. The drawn-art of the 1955 Buick ads is a great example ot that. As the cars' length was masterfully increased and accentuated from what "real life" was.

www.eatondetroitspring.com/findmyvehicle , after putting in your vehicle look-up into the menu, click on the "Link" logo and it'll bring up the appropriate factory brochure. There are some good images which you might use (of '69 Fury models". Plus, you might input other similar-year Dodges and Chryslers,too, if desired.

Not sure why Fuselage cars tend to have the rear spring issues when the Slabs didn't? Just my observation. I used Gabriel HiJackers on the back of my '70DH43N with no issues, it took just 60psi (30psi min did not raise it, just inflate the bags) to level things out (the car had a Class I ball hitch on it in an earlier life). It just leveled things up with no adverse impact on ride as the air pressure was not enough to raise the spring rate. And it's still that way, 40 years later. Just my experiences. I know others' have different orientations in this area, which is fine. 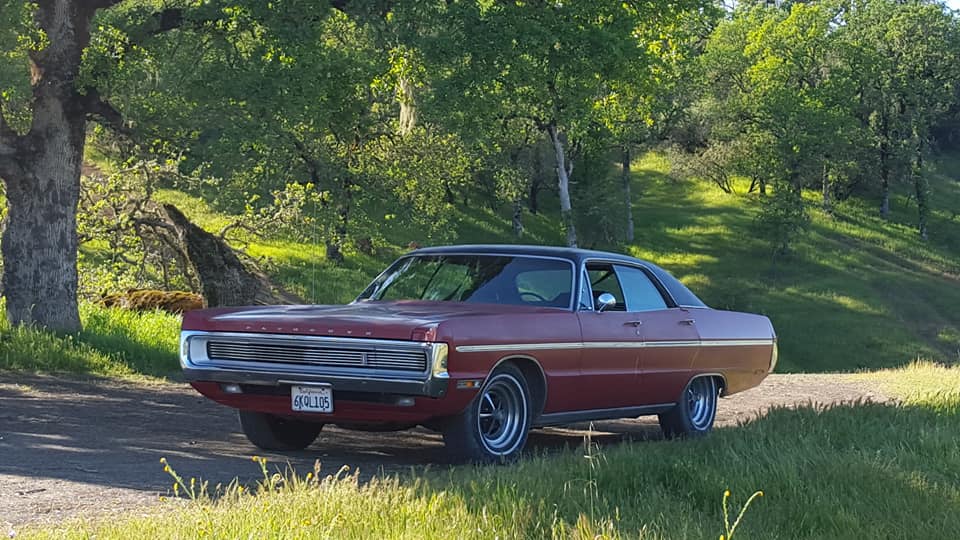 Factory brochure pics. To me they all look too low in the rear or too high in the front or a bit of both. 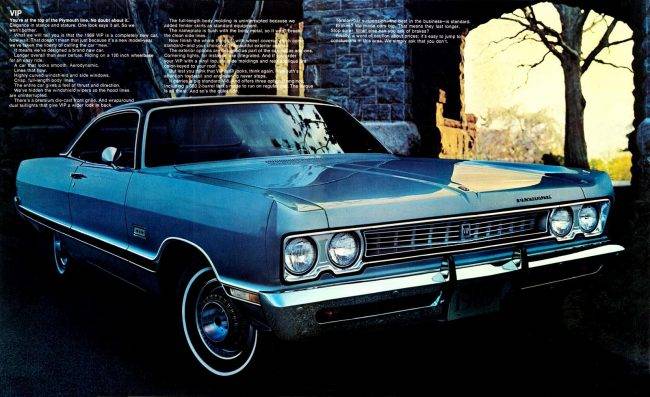 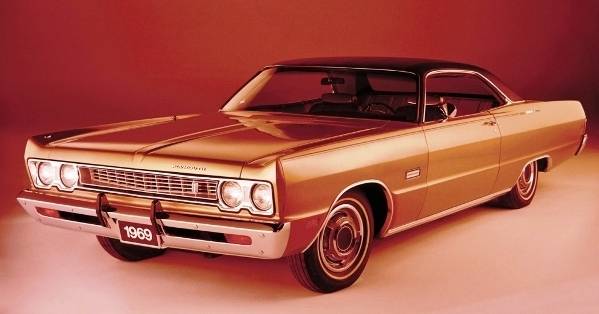 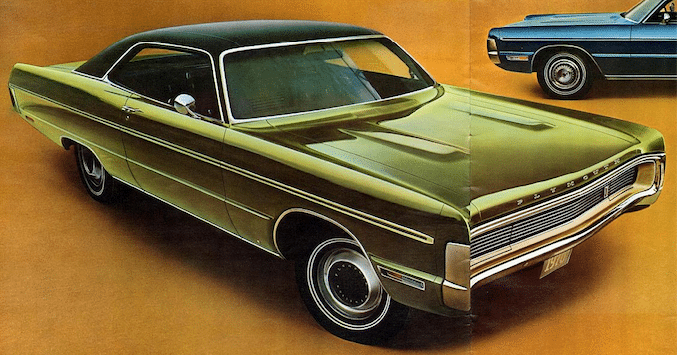 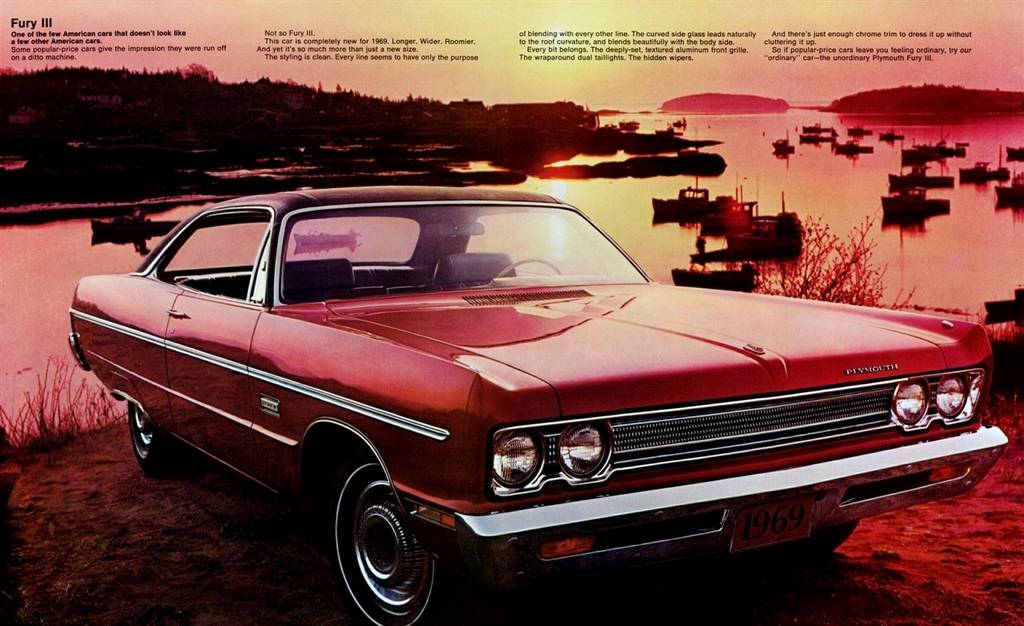 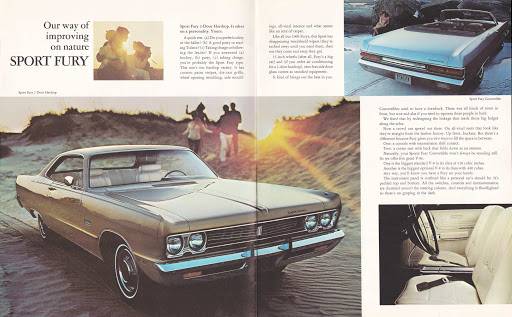 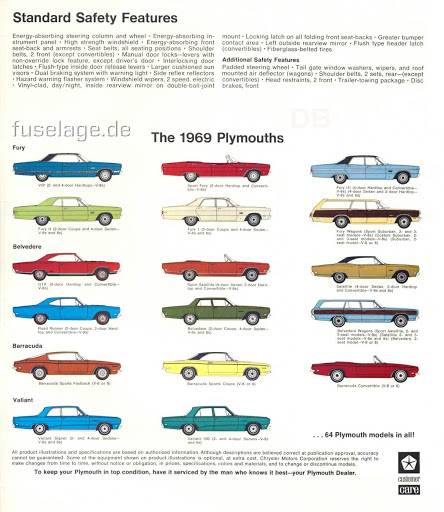 For a good sense of how your car was designed to look in real life, I’d rely on the original TV/movie commercials that show the cars being driven. That takes care of most of the worries about the mind tricks ( perspective etc.) that photographs might play.

Your car, if I read this thread correctly, is an Australian-market 1969 Dodge Phoenix. If so, then a 1969 Fury ought to provide the correct benchmark. No rake in the factory setup — take this commercial, starting at 42 seconds, as an example:

This is not a 1969-only phenomenon -- see, as great example, this commercial of a 1970 SFGT in motion which again shows the front higher than the rear (is that "negative rake"?):

Now, to my eyes, there is one C-body Plymouth that looks to be perfectly level front and rear: the Suburban. Compare the stance of the 1969 wagon in this ad to those of both 2-doors above:

If I was to guess in the side drive by the rear rocker panel looks to be about 1” to 1-1/2” higher than the front. Not much but just enough to tell it is higher.
My visual perspective without freezing the video and taking known measurements for perspective.

My car is all stock and unmodified. This is how sits... hope this helps 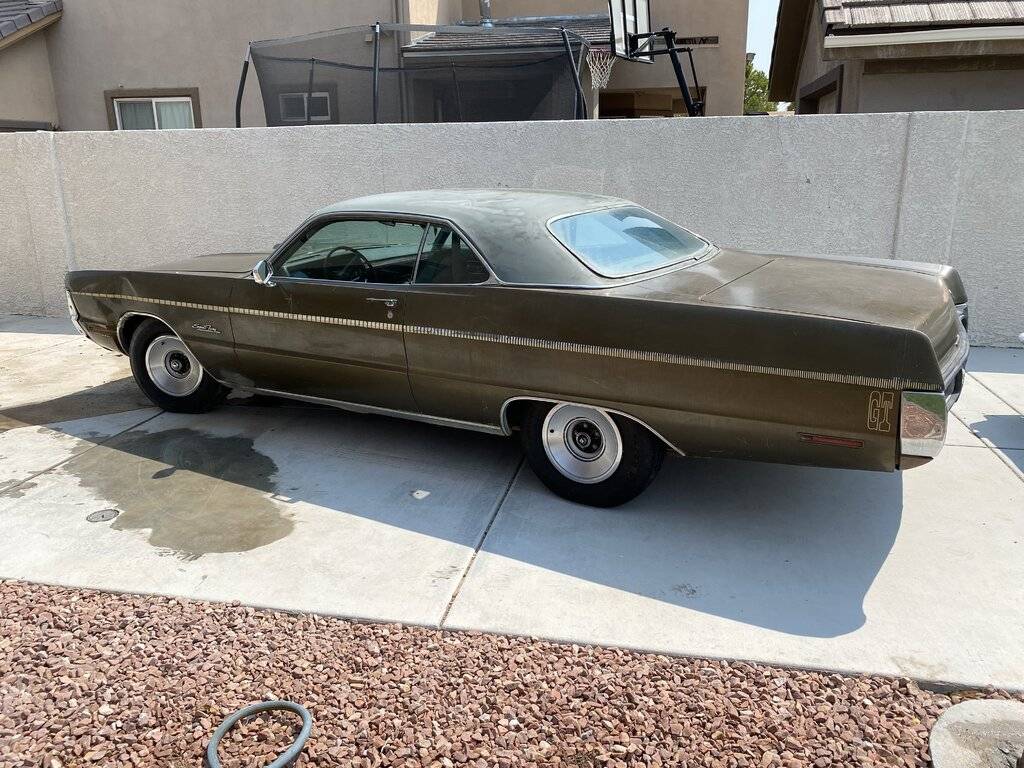 ayilar said:
For a good sense of how your car was designed to look in real life, I’d rely on the original TV/movie commercials that show the cars being driven. That takes care of most of the worries about the mind tricks ( perspective etc.) that photographs might play.

This is not a 1969-only phenomenon -- see, as great example, this commercial of a 1970 SFGT in motion which again shows the front higher than the rear (is that "negative rake"?):

Now, to my eyes, there is one C-body Plymouth that looks to be perfectly level front and rear: the Suburban. Compare the stance of the 1969 wagon in this ad to those of both 2-doors above:

The "in motion" orientation can have its issues, too, as to whether the car is accelerating or being driven at a steady speed. A car with a slightly higher front end level is supposed to imply "a vehicle in motion, under power" rather than not. Which can also relate to a slightly lower rear body height. Just as in the earlier 1960s when many drag racers would lower the rear suspension heights for allegedly better weight transfer (at the starting line) and traction. It was more about "the look" and perception that the car was fast, even if it was not actively raced.

As I recall from the fsm, there is a range of specs for the front end height. Depending on engine, suspension option, and if it's a station wagon or not. Which can then reflect the number of leaves in the rear springs (and related build heights of the spring assy at its mounting point). Still, to keep the resultant car sitting mechanically level through all of this.

I'm defining "mechanically level" as the vehicle's rocker panel being parallel with the road surface.

On my '67 Newport, I upgraded the y-pipe back exhaust system to that of a '72 440 C-body. It all fit together as desired as the wheelbases are the same, BUT the difference was that the behind-the-axle pipes needed some adjustments upward to clear the existing Class I trailer hitch (which was on the car when I got it). Why?

After I got to looking at our '72 Newport, it was obvious what was going on. On the '67, the rear sheet metal angled UP to the rear bumper height, from the rear wheel area. On the '72, the rear quarter panel was still angled upward, but not nearly as much. Reason? While the rear bumper height was not that different, there was a valence panel UNDER the rear bumper which completed the rear sheet metal of the car. As a result, the rear pipes had to clear that and were more horizontal in their orientation. So I took the car to a local muffler shop, explained what I needed, and the '72 pipe was tweaked to raise it about 1.5" to be just below the '67 rear bumper's lower edge, as was stock. When done, it was "right".

With the rear sheet metal being more horizontal on the Fuselage cars, any little bit of rear spring sag will be more evident. Or spring build height differences, for that matter, which can move the body up or down, as a result of more leaves and resultantly a bit stiffer spring. Which would explain the station wagon appearing more level than the sedans (in the ssles brochure). The wagons would usually have 6.5 leaves and most sedans would be 5.5 leaves, as I recall.

Which can bring up another orientational relationship. IF the rear springs are correct in the number of leaves AND support weight specs, then the front suspension adjustments would need to keep the rocker panel level. Just the opposite of getting the front correct and then assessing the rocker panel orientation for correctness of the rear (now used) springs' condition.

CBODY67 said:
The "in motion" orientation can have its issues, too, as to whether the car is accelerating or being driven at a steady speed.
Click to expand...

Indeed, which is why I pointed out to a point in that specific film (42") where the car is in steady motion and not accelerating, braking, or turning.

O.K......
A Little overwhelmed by All the Information.
Thanks to Everyone for your Assistance.
Looking at the Photos I don't think the Rear is quite as Low as I Thought.
The Car has been sitting for 16 Years only moving to be placed on a Tilt Tray two or three times, So until It's driven a few miles I won't know
where it's going to sit.
Was originally a 318, now has a 383 so I'm thinking they may have wound the Torsion Bars a little too high to Compensate.
Will load some before & after Repair Photos when I get some Camera Batteries.
Story of your Life, hauled the Camera out to take some Piccies when the car was delivered home from the Panel Beater, Two Shots & the Batteries went Flat.
Anyway I have Bulk Jobs ahead of me, So I'll more than likely be pestering you Fellas again.
Once More Thanks to All.
Tony.M

My Polara is going in for a alignment Thursday. The ride height will be adjusted then. I measure at the rocker pinch flange just before the rear tire and behind the front tire. I'm looking for 1" lower in the front. This will compensate for passenger and trunk load.
I never did find a height measurement in the manual, just a procedure for making the adjustment.

The only specification for ride height in the Service manual is the difference between the lower control arm pivot and the lower ball joint. This is a constant regardless of wheel tire combinations.

I have always set my cars up level to a 1/2" drop measured at the front and rear of the rocker panel.