I am replacing the timing chain and ready to re-assemble the cover... I have been advised to loosen the oil pan bolts in order to lower the pan enough to get the lower rubber seal on. I loosened all the bolts but the oil pan won't just drop. I tried prying it but fear bending the oil pan where I CAN get to it.... if I pry it budges a bit but bounces right back. Is this normal or did someone overdo the oil pan gasket? I did try to fit the cover (dry run) with the oil pan in place but it seems impossible to do without pushing the seal into the pan (at the top corners).

I found the following youtube and it is for a Chevy but looks similar.... he talks about glueing the seal to the cover with weatherstrip cement and then greasing the seal... as well as getting a couple screwdrivers in there to wedge it.... any thoughts on this?

any help or tricks would be super appreciated

The last thing you want to do is try to pry the pan down. Once it breaks loose, you now need a new pan gasket. You have two options. The weatherstrip adhesive as you mentioned above would be one. The other is to ditch the rubber seal and use either Permatex Ultra Black or Permatex Right Stuff to seal the cover to the pan.

A heavy duty job of a permatex'd on both sides (or all four sides w/windage tray) will glue the oil pan to the block whereas you may just about need a chisel to separate the two. I just hate having to scrape all the glued scraps of gasket remnants leftover, mab'be I'll get some rollo/robo/rolok discs, nope didn't hav'im back then.

I'd go back and make sure you got at all the bolts. The ones on the Driver side are a PITA and IIRC you need the fairly long 3/8" extension with a flex joint around the engine mounts.

I put gaskets in place, a Phillips head screw driver on both of the bolt holes mid way up the cover, push down on one side and start the bolt in the bottom hole. Then the same on other side, and start the other bolts using the screw driver to line up the holes if necessary on the rest.

bigmoparjeff said:
The last thing you want to do is try to pry the pan down. Once it breaks loose, you now need a new pan gasket. You have two options. The weatherstrip adhesive as you mentioned above would be one. The other is to ditch the rubber seal and use either Permatex Ultra Black or Permatex Right Stuff to seal the cover to the pan.
Click to expand...

Thanks... So the weathstrip adhesive..is that to just to secure the seal to the oil pan to keep it from slipping? I notice when I try to put the cover on, before I can try to seat it down, I have to push it in over the seal and that seems to be what pushes the ends in toward the pan...
I looked at the old cover and it still had the seal stuck to it.. looks like they tried to install it and the ends went inward, at which point I think they gooped it with something orange..
One of my challenges in thinking this through is understanding what different"goops" do... Do they all act as glue? If I use weatherstrip cement, it seems that is just as an aid to installing as I would think temperature would be an issue..and adding ultra black over it..would that stick?... would I use that to glue the seal to the oil pan or the cover?
What if I cut the very ends off the seal so it doesn't push in and then use ultra black to fill the ends?
If I forgo the seal altogether, I think I would put a thick layer of ultra black on the pan and allow that to set. Then, put the cover on in hopes that the ultra black is thick enough to seal. And follow up with more goop.
Or, I could try my best with the seal in place and then when it slips fill in the gaps really thick...(looks like what was done before on this engine)..seems to me this would have more possibility to leak ..
Or I could just put the cover on and then goop the heck out of the gap... I've included a picture of the of the cover micked in place to show the gap without the seal and a pic of the old cover with the seslstill stuck to it...I think if I try to glue to the cover I would need to know exactly where to position it....
Replies are always appreciated.. 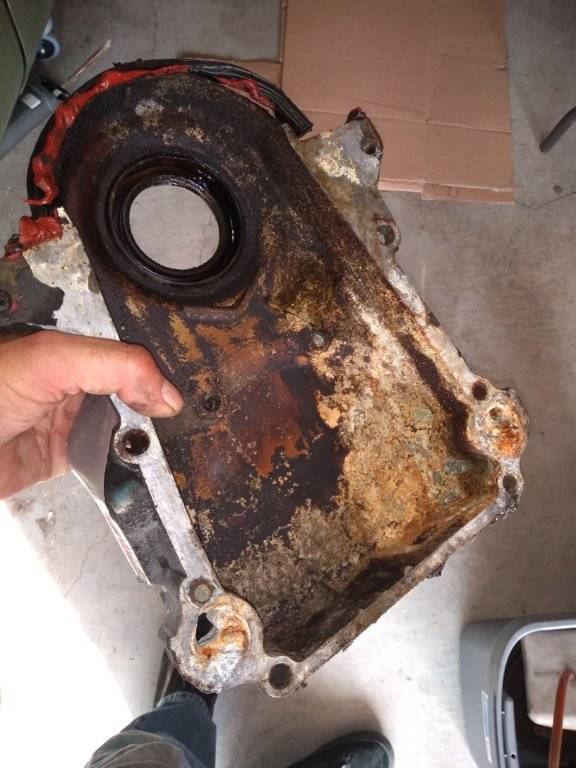 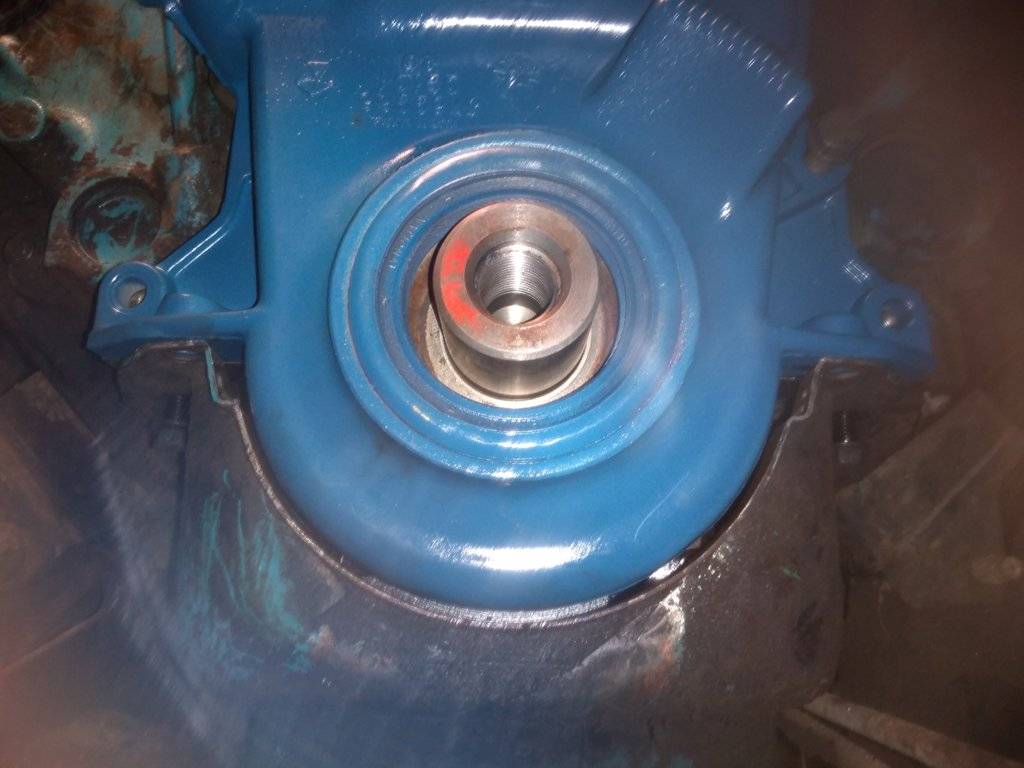 A heavy duty job of a permatex'd on both sides (or all four sides w/windage tray) will glue the oil pan to the block whereas you may just about need a chisel to separate the two. I just hate having to scrape all the glued scraps of gasket remnants leftover, mab'be I'll get some rollo/robo/rolok discs, nope didn't hav'im back then.

I'd go back and make sure you got at all the bolts. The ones on the Driver side are a PITA and IIRC you need the fairly long 3/8" extension with a flex joint around the engine mounts.
Click to expand...

Pretty sure I got all the bolts...somebody told me to tap sideways with a rubber mallet to try to break the pan loose..but I really don't wanna head in any direction that could mean replacing that gasket..
I replied to bigmoparjeff's suggestion but I meant to address it to everyone..still learning how to work the forum.. all help is appreciated ..I'm gonna have coffee and put on my dirty pants and get to work...uuugh
C

Ages ago, when I did the timing chain on my '77 Camaro 305, I got to the cover install part of the deal and noted the "loosen the oil pan bolt" issue. I tried to force the cover/gasket into place, but couldn't. The SBC Gen I lower seal has a flange on each end, as I recall. THAT was the reason for the oil pan loosen/drop, to get those flanges where they needed to be. I consulted my engine builder and he suggested I trim the flanges and use black silicone sealer to fill the gap, after the cover was back on.

Trimming the flanges let things install easily. Then, I carefully filled the gaps as best I could with finger dabs of the black silicone sealer. I re-checked it a day later before I installed the balancer and such. No leaks. Didn't have to compromise the existing integrity of the oil pan gasket either. Perhaps you can do similar with the Chrysler?

Tradenames might be nice, but I like to describe the product, myself. High-heat black silicone sealer can be under various trade names, that are all pretty much the same. GM used to have a rather viscous charcoal-black silicone sealer. It was heavy-bodied rather than "runny". It worked great to do the end rail seals of the intake manifold gasket set. Worked well for me in other applications, too. I think that any black, high-heat silicone sealer is good to use anywhere you might need a silicone sealer, these days. The trade names and colors have evolved over the past decades, by observation. Always some new improvement (i.e., oxygen sensor safe) from time to time.

The old "yellow weatherstrip adhesive", was a universal adhesive for gaskets in prior times. I HATE that stuff as I (and any other person doing valve cover gaskets) after spending too much time scraping it off of valve covers, well after the old gasket had been removed. It helped techs do their jobs quicker, but little else, as the gasket was stuck in place on the valve cover. Some of that old yeller stuff needed a jack hammer to remove it! Now, I use high-heat silicone sealer to put a thin coat on all sides/edges of the normal gaskets I use. Seals them to prevent the wicking oi oil through them over time AND makes them easier to remove (when needed) with easy clean-up. Just a whole better deal, all around, to me.

What does the gasket look like, not that familiar with SB. Has lips that go over the pan and press against timing cover? I would yellow snot, 3M trim adhesive, it in place to the pan and then install cover.

Wish I could remember how it went on my 360 back in 2009. I chained the chain out over several days mostly in the dark with a flash light. I do remember having no issues once I got those two bottom bolts to catch.

What the hell is this ass-monkey mess? Am I right that this is the way it came apart and this is from the Frozen bolt..OMG help thread? 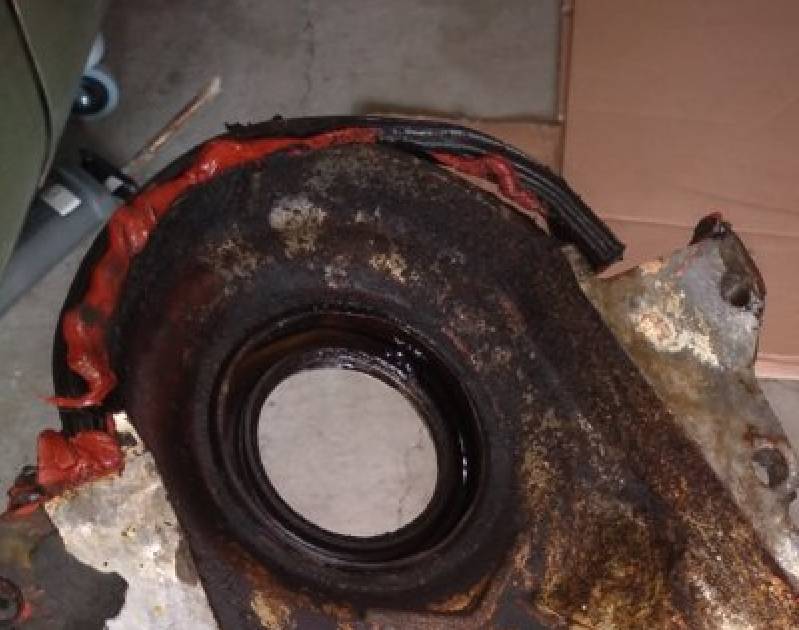 This picture shows that you have the 'easy' cover to do the lower seal, the flatter 'whisker' type seals as I can tell by the holes circled. 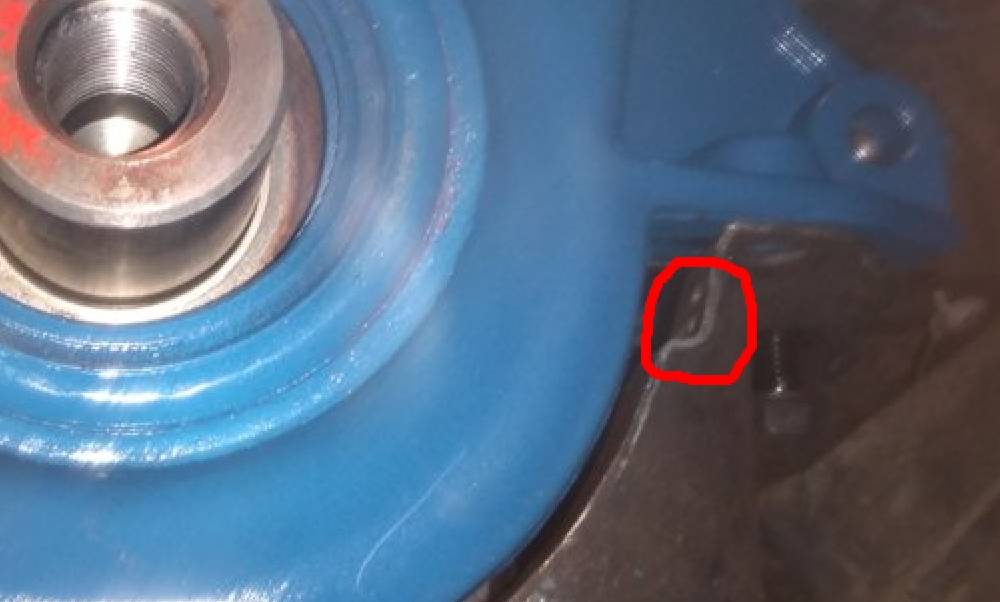 You should have holes all down the 1/2 circle for the 'whiskers' of this seal (circled) to hold it on place. 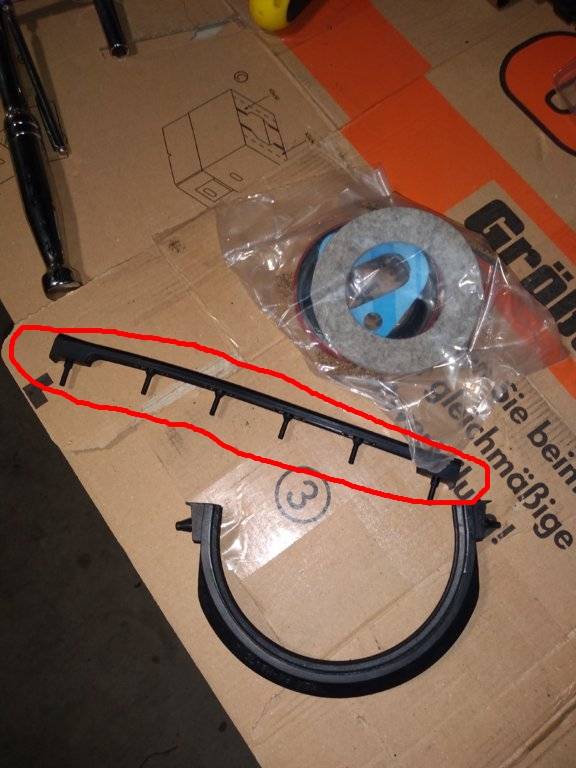 Now that red circled seal doesn't look quite right as at the end it doesn't have the 2 whiskers. Check your year application as the engine or oil pan may not be of a 1972 vintage.

IIRC late 60's had the 'saddle seal' (PITA to compress thus drop pan), then a flat skinnier seal with 'whiskers' & 1 end nub whisker, then late 70's with 2 whiskers on the end.

You really shouldn't have to do too much trimming as the seal compresses when assembled in proper order, and will require minimal 'Goop'.
AGAIN READ THE INSTRUCTIONS WITH THE AFTERMARKET KIT! as many have they're own bright ideas for non factory (ahem) improvements.

Oh and BTW if you use the crankshaft 'Felt' washer, soak it in motor oil before installing as if it's dry at 1st startup it may shred to pieces and you know where those fibers will end up.

I would install the rubber seal on the pan, use silicone on the edges of the pan. Set the cover down on the seal and push into the engine block and start the bolts.
You must log in or register to reply here.