So, putting in my new Moog Problem Solver ball joints and I have a problem. The driver side went in beautifully with no problems. However, I have a problem on the passenger side. First off it went in with very little effort (1/2" ratchet, whereas the driver side needed a 3/4" breaker bar with a long pipe the whole way in!), and now it won't torque at all, it just spins easily even though it's bottomed out. Per the FSM if you can't torque it to "at least 125ftlbs" you need to replace the UCA.

Do I need to replace the UCA or would a tack weld or two be acceptable?

If I need to replace the UCA, does anyone have a passenger side for a '71?

I know I could possibly solve my problem with new tubular UCAs from Firm Feel, but after spending a huge amount on my suspension I'm not sure I see the value in it unless I have no better (economical) option.

It's acceptable to weld the ball joint to the upper arm.

On a collector car, it's likely that it will never need to be replaced again.

Back then, "later replaceability" was a prime consideration, which meant "no welding" on the suspension parts. Plus, "going overboard, for good measure" could put more heat into the metal, but which might also cause it to fail later. Not good!

But once you get it all installed, adding two small tacks would probably be fine. Should they need replacing, for whatever reason, a little grinder-wheel action would undo things. Proceed at your own risk, FWIW.

bigmoparjeff said:
It's acceptable to weld the ball joint to the upper arm.

On a collector car, it's likely that it will never need to be replaced again.

Any advice on how much to weld? A couple of spots? One bead of X inches? A pile of ugly amateur slag?

Just a few tacks is all I did when I had the same problem but I did quickly swap the whole uca that had a good solid original ball joint still in it. I just don’t like the quality of today’s junk, give me good used any day.

I did the upper ball joints on my son's Barracuda about 15 years ago. I encountered the same problem. In my case it was the ball joint was not made to specs. I bought another and it was fine.

P.S. they were a popular brand but unfortunately I do not remember which one.

A few tack welds and yer golden.
Shops have been doing that for years on F/M/J bodies,B series vans and pick em up trucks lol.
Wjen it comes time to replace the ball joint again cut the tack welds and weld in new joint again.
D

If you do decide to replace the UCA, I have one from a '70 Polara that should fit.

detmatt said:
Just a few tacks is all I did when I had the same problem but I did quickly swap the whole uca that had a good solid original ball joint still in it. I just don’t like the quality of today’s junk, give me good used any day.
Click to expand...

MY very rationale for DRIVING these ~50 yr old marvels! The modern potmetal ersatz steel can't be trusted. I've used the ****, sure, when I had naught else or little cash, but NEVER trust the stuff. If I MUST buy new now, its gotta be Rare Parts. Even Moog let me down on an upper ball joint for Tilly, not that's of CURRENT concern....

MInd you, I actually shimmed both of my upper ball joints w thin sheet steel so that they would bite hard for my "Big Pipe torque job" on them near 4 yrs back. NOW I have some DECENT torque wrenches, so I can at least measure up to 150 ft-lbs.

Had to weld one on my Dakota 2 years ago....a pair of good tacks and it's been fine ever since.I did get 50 ft lbs on it before tacking. 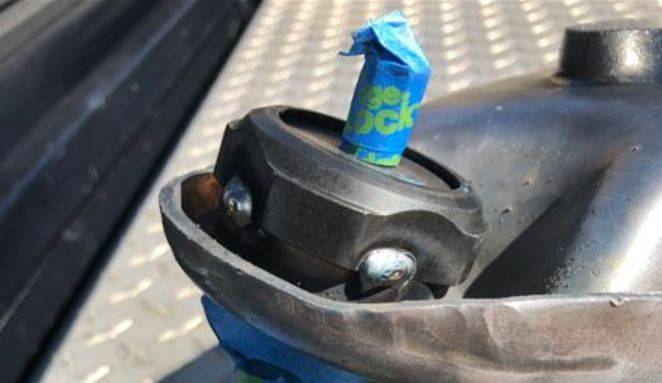 Here is what we ended up with...

should last for a very long time

Perfect. You can tack underneath if the tacks on the top would bother you.
You must log in or register to reply here.

Need a source for 1966 IMPERIAL upper and lower ball joints