Original, two owner car (one owner until 2012), still wears the California Original Black Plates. (I have the registration DMV papers, to show one owner from 1968 to 2009 at the same address. I bought the car from the original owners estate in 2012, whereby becoming the second registered owner.

CHECK OUT A BUNCH OF PHOTOS ON PHOTOBUCKET OF THIS CAR & THE ORIGINAL RECORDS: CLICK THIS LINK: http://s1302.photobucket.com/user/Loren_Mckechnie/library/Chrysler Newport 383 1967

First owner was literally "the old lady story". (well, she wasn't that old in 1967)
She bought the car new in 1967 at the Chrysler Plymouth dealer in Sunnyvale CA. The car was registered to the same address, all these years. I am the second owner, and the car has only 33K original miles.

Since getting the car, I have driven her around town, quite a bit and love all that Torque in the wedge 383, being over 300 HP she moves. I had the following work done, to get her 100% tip-top shape.

INTERIOR:
The interior of the car is immaculate and "as new" as a car from the 1960's could ever be.
*The headliner is perfect, taught and clean.
*Amazingly as new seating surfaces, including the rear package shelf and dash, which tend to get cracks from the sun, but not on this garage queen.
* Back window has the original "Airtemp" Air conditioning by Chrysler sticker.
* Front window has the original Sunnyvale Chrysler Plymouth sticker.
* Front window also has an original $5K reward sticker from the Montgomery Ward Gold Seal Plan. The VIP gold seal protection plan, will pay for information leading to the arrest and conviction of anyone stealing this vehicle.

On this note, the original owner also had her drivers license number neatly engraved on the door sill, of the drivers door. She was very attached to this car, and to keeping it tuned up. There was some notations of service, a new carb and compression numbers written in grease pencil on the under slide of the hood. I didn't clean them off, so they are part of the history and mystique of this original car.

*Original carpet, and seat-belts are even dated 1967.

The following are the interior defects that I have noticed, that make this "less than a prefect show car". Otherwise the interior is clean and tidy.
*1/2 inch tear in the drivers seat, along the top edge of the seat back.(See photo) Hard to see, as it blends in with the contrast stitching.
*crack in the B pillar plastic trim around the screw hole.

EXTERIOR:
The paint is original. Shiny and good. There are small chips, and two door dings on the drivers side. Otherwise the body is 100% straight as an arrow.
The paint has various chips along the door edges, and some of the hard style lines. I was just going to touch them up, when I had the roof color changed. Its really too nice, to re-paint in my opinion.
Chrome is all incredible. Door handles, bumpers etc. Stainless door/window trim looks new. Aluminum lower body trim also beautiful.
Stainless Steel hubcap/wheel covers are in perfect condition, with only a few slight chips in the inset black paint rings, near the chrysler lettering.

A Classic Tow Vehicle: WHAT?
The original owner was very particular, and customized her Chrysler while working for a Aircraft/defense manufacturer in the Silicon Valley Area.
She had the following modifications done to the car, by friends at the previously mentioned aircraft manufacturer. (I spoke with the estate, and they expanded upon the amazing trailer hitch)

* Custom Heavy duty trailer hitch. This is truly a work of art. It is gusseted, and cradles the fuel tank under the car, tying into the frame of the car, with a 1/2 steel cross brace ahead of the rear wheels, then also tied into the rear frame back by the bumper. They also installed helper springs on the back leaf spring suspension. (This would make an amazing tow vehicle for your Hemi powered hot-rod). She also had an aftermarket water temperature gauge installed under the dash back in the 1960's, so it looks proper.

Defects on the car: Full disclosure.
*There is a small pockmark in the original windshield at the top edge, behind the rear-view mirror. (See picture). Looks like its been there a long time, and isn't going to get worse.
*Something is broken in the radio, and it will not tune reliably, but it did work when I first got the car after some tweaking....trying to find the station. I haven't tried to use it lately.
*The paint has faded inside the Newport logo's (the red background for the castle spire logo's) on the rear fenders, and should probably be re-touched. (They're not under any clear-coat, or encased in clear plastic as some others are, so its an easy touch up job.)
*The family, who was storing the car for about 2 years after the passing of their grandmother(the original owner) took the car out of the garage, and put a plastic tarp over the car, which created the noticeable erosion of the paint. This is mostly on the rear corners of the roof, but also on the fender trim, where wind blew the tarp, and scuffed and wore the paint through, to the primer below. The car has NO rust anywhere and my plan was to keep the body the original paint, as its in great shape and shiny, but have the roof painted white or black. Its a very interestingly shaped car, with the hood and trunk almost symmetrical from the side view. I think it would look very nice with a white, creme, or black roof.

CHECK OUT A BUNCH OF PHOTOS ON PHOTOBUCKET OF THIS CAR & THE ORIGINAL RECORDS: CLICK THIS LINK: http://s1302.photobucket.com/user/Loren_Mckechnie/library/Chrysler Newport 383 1967
Click to expand... 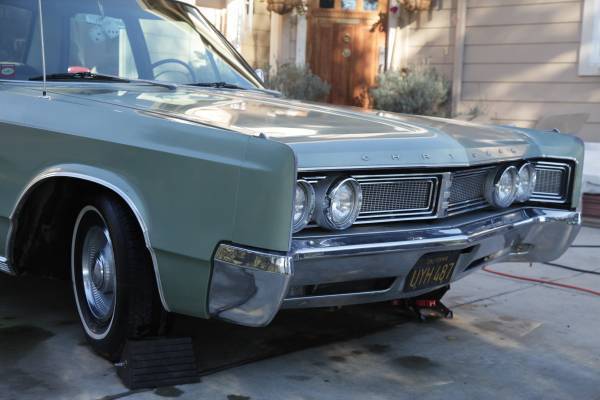 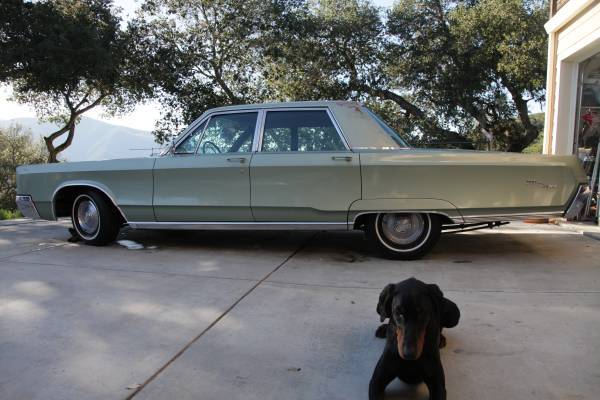 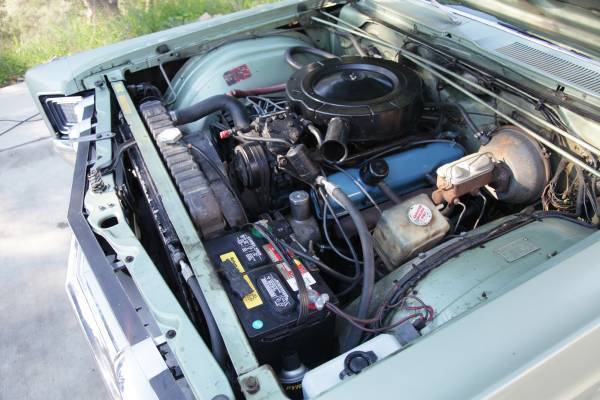 Whats the tank in front of the brake booster? Overflow tank? if so, factory option?

OneEyed said:
Whats the tank in front of the brake booster? Overflow tank? if so, factory option?
Click to expand...

Overflow bottle, a typical parts store unit, not factory or even close.

Starting fluid next to the battery?

Not bad......engine compartment pretty clean except for the overflow addition.