I'm wrapping up the paper phase of my project and just starting teardown and a pretty big problem has struck me. I'm going to join the cult and stroke out the 383 to 492 (+.040" and 4.25" throw, completely unnecessary to say but I enjoy thinking about it), doing a old meets new resto-mod build. This will include a Holley Terminator X universal kit that will give me MPI EFI and a drive by wire Gen III throttle body, as I'm taking the carburetor off it hit me that with this new setup I have no clue how I'm gonna run the two seamlessly with the HD727's kickdown.

The throttle body doesn't allow for any extra linkage because it is supposed to be connected to an electronic transmission and it would defeat the point of drive by wire. Going with EFI in anyway, much less the added complexity of MPI, is completely uncharted territory for me but I am positive that I want the efficiency and flexibility that it offers. I'm sure I'll learn much more once I get the system and all the intricacies of the programming but my question is if anyone out there has had to solve this problem and if so what did you do?

I was thinking using one of the extra busses to trigger a solenoid when there is a quick ramp to WOT, if that is a capability of the ECU. I truly just don't know, so I look forward to hearing from those of y'all with experience with Terminator X ECU.

People who want a mechanical kickdown with a gen III convert to a conventional TB or use the early ram pedal box.
I have an MPI conversion because that's all there was in 2009 that could handle boost. These days for what you're taking about I'd be looking at the sniper not terminator. Just my opinion.

Pedal Box!!!! Ding Ding Ding! Didn't know these existed. Thought it was all the newer pedal with the potentiometer built it. Thank you man.

Sticking with the MPI because down the road when I go with a turbo I'd need two stealths to handle the fuel needs and MPI is cheaper than two TBs.

How much power are you planning?

Probably have my head in the clouds a bit but while it's NA within a whisper of 615 or so and with 10-11 psi boost should be touching 850.

That really depends on how well I can fill her lungs. I'm ordering TrickFlow 240 heads and as well as they flow on paper, reality sometimes gets in the way.

I see a lot of folks do these 490-496 stoker builds and wind up with 540 HP or so and I gotta tell you I'm gonna be pissed if those are my numbers. Now I'm not saying 540 isn't PLENTY of power because it's a boat load but I'm gonna have 10k in this build after planning it for almost two years (I didn't have the car yet so I actually planned out a B, RB, and crate Gen III

) I had too much time to plan and convince myself I can squeeze every last drop out of the low deck. I do think 600-625 is realistic as long as I can afford to put that much of the budget into the engine.

Crossbolted Mains side tapped for 4 bolt, 1/4" hardened girdle, 4340 Molnar crank and rods rated for 1200hp if I remember right, 2618 diamond pistons, all hard edges of the block chamfered to relieve stress risers, I'm gonna do everything I can think of to stiffen the rotating assembly and block 50% beyond anything I'll ever throw at it.

Since that's the very first thing that the block is gonna see as soon as I finish tear down any thing jumping out at you that I'm missing?

Oh yeah, on the transmission end gonna go with 4 pinion front and rear planetaries, upgraded bands, and as many friction and steels as I can get to fit.

727 is pretty bullet proof from the factory so I'm hoping that'll do, this is where I'm least confident actually, I am gonna be rebuilding it by manual and LOTS of questions and prayers

1. Everyone blows up their first turbo engine
2. Rolling restos/projects have more chances of success
3. You usually don't have to spend $25k to learn how to do something.

At this point I'll ask if this is your first turbo build and/or first power build in this neighborhood. I've not built at this level and if you have I'll stop giving advice

If it's your first, I highly suggest playing with less expensive pieces to start. Build a stocker of whichever engine platform you choose, that way the fab work transfers. Make a stock 2bbl 383 make 500hp for example.

First question: yes it might be my first turbo, I say might because it's a WAY down the road interest. I have a solid 69 Sport Fury project car that is gonna take up to 6-7 years to finish I'm guessing. Like everyone money is gonna be what makes it take so long and once I have that much time and cash invested I'm not positive I'll want to risk boost.

Second part: it is also my first completely solo blueprint engine. I've done or assisted on 7 or 8 head build/rebuild and cam swaps (top end is my highest level of confidence), I have assisted on a stroker bottom end build and I've rebuilt the bottom end of my own engine back to factory+. I've also assisted on a fully blueprinted engine, the stroker bottom end earlier, from sizing the main bearings to filling the tank, I was involved in every single step.

I feel pretty confident in my knowledge base in general, aside from the stuff listed above I was a 63B in the Army, which is a Wheeled Vehicle Diesel Mechanic, for five years. That said almost nothing above was a B Block Mopar engine. All engines have their own nuances and unique features and I simply don't know the 383's yet. That's why I'll gladly listen to anyone's opinion about what has worked for them, even if they don't know why it worked if you pay attention to the specs that they list and where the power band winds up you can start to understand where this engine likes to live.

And lastly I know absolutely Jack **** about automatic transmissions. I can change the fluid, and filter, and I have a very very very loose idea of how they actually function. A manual is simplicity itself, but automatics baffle me.

You really think you can get 500hp with a 2bbl??? I'm not saying you're wrong, I'm genuinely asking. I just don't see a 2bbl moving enough air but maybe.

No, I mean take a stock 2bbl engine like I did, put an RV cam in it and add boost (starting at 5psi eventually 12psi on stock head gaskets and cast pistons

Gotcha. Exactly the same engine I'm working with 383 factory 1x2 manifold, did yours come with the HD727 also? Wondering why mine came HD stock. Figured that would be the 440 or a custom order Hemi that'd get the HD stock. Or maybe the heavy duty wasn't all that heavy duty....

I am no expert on what a hd727 code really means for the average c body. I have a build a500 OD now though I think I may drive through the convertor.
I have an rpm performer intake, sheet metal elbow and Ford style TB with a classic FAST efi. Those were the most economical things for me in 2009

I have stayed away from efi because while I fully understand how it works, tuning them seemed more like wizardry/coding than mechanics. It took me years to really feel like I was competent at tuning carbs. But as aftermarket EFIs become less complicated and I am advancing in my wizardry, it feels like now is the time to go all out.
How does the 42re feel? I had a Ram in 05 that I think was 45rfe transmission and that thing drove me nuts, always dropping from 1st to neutral without a load on it. Other than that I loved that transmission but man that used to drive me up the wall

I really really want to run the exact same intake/tb as you but I'm worried about running out of air before I get everything out of the cam when I put my foot in it. Where do you see your power at with the Performer? I like the way they flat deck the runner on the single plane I just wish they didn't put the holes in it, wrong angle. 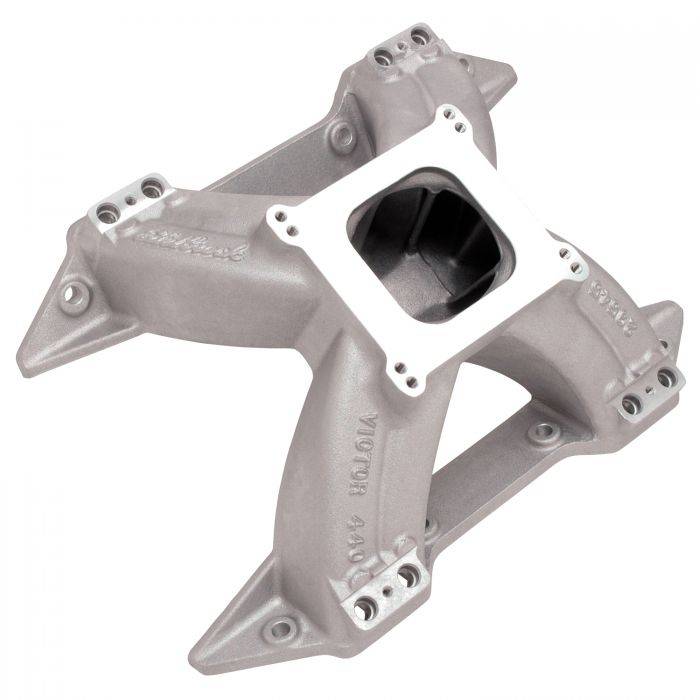 You think the Performer's runners have enough meat to do the same thing to?

What I learned from some others before me is to put the intake on the engine you would if running a carb. For me that meant rpm performer, the best dual plane out there. At 850hp you want something different.
This is a place where my advice to start small means some rework/cost over time as you'd use 2 different intakes. I actually had a torker converted as well since I had a friend doing the milling. I've never used it however

My a500 is an rh, not electrical, so just 2psi switches to flip of and lu on

Oh absolutely! If and when I go boost I'll be changing the entire "respiratory system", I always try to think of engines as an organism, intake, tb, injectors, cam & liters (solid EDMs), and probably springs too. That is good advice though, just use the same intake as if it were getting a carb. I keep trying to over think it because it's something new to me.

People say you have to have a single plane for efi, not the experience of my mentor or myself

Exactly what I have been told and seen almost exclusively till I was reading a Holley forum and this guy had a Perf. RPM on his vette. He was going over EVERYTHING needed to swap to MPFI from his ECU to custom crank wheel, his tables, I mean it is an absolute amazing wealth of knowledge. Only thing he didn't cover was this topic, drive by wire because he liked the feel of the cable. I prefer the lower RPM that dual plane offers, I just worry that it won't handle the volume, but it's a pretty big manifold. Time will tell. Truth be told, this whole topic for me, is not going to be a pressing issue for at least a year. I haven't even taken my heads off yet because of the weather. I just hate not having a clear and thought out plan before I ever pick up the wrench. Nothing worse than really wanting to get some stuff done and bang something you hadn't planned holds you up for two weeks waiting on parts.

All that said, if you want 850hp you'll want a big single plane intake