'73 Lebaron- Thanks! Downtown and the lake are definitely a beautiful place to be. Glad you enjoyed our city, I'm about 15 or so minutes South/Southwest of downtown. Means a lot coming from someone living in such a beautiful place like NZ. I'd love to visit sometime.

Nothing wildly exciting for now, but stuff that just needs to be done. Belts and Hoses tomorrow is the plan. Plugs and wires if I have time as well. New front rotors, pads, and wheel bearings sometime this upcoming week, I'll take a good look at the soft lines then too, and might end up just doing them for peace of mind. I'm having my friend sandblast and paint my new air cleaner assembly, and when that's back, I'll drop the new distributor/box in and ditch the lean burn. Rear diff service, and a trans service are on the menu soon as well. Just making sure its up to speed for a nice long trip when I have the time. I'll probably short change the oil a few times as, like I had previously mentioned, it doesn't seem to have been changed in the last decade.

When it gets a bit warmer, I'll use the machine and evacuate and pull a vacuum on the AC system to check for leakage. Compressor runs and it gets cold, but hasn't really been warm enough to tell how well its working yet. We had snow flurries today

Tomorrow I can finally move the car into its permanent spot. A nice heated and cooled, enclosed, former parking garage that a good family friends husband uses for his own cars. He graciously made the offer to let me use it, and I couldn't say no. Best part is, it's about a 7 minute drive from the house, and frees up my garage. It's a small (maybe 25 spaces?) space, and he uses about 12 or so of those, so I'll have my own corner to play with. Definitely excited!

Well ended up not moving the car to the garage today, got a bit sidetracked and ended up doing Plugs/Wires, Belts/Hoses, and flushing the radiator, and core, and block, as best as I could.

Now my plug wires were supposed to be a burnt orange color similar to the stock ones per the eBay ad. They're bright red lol. Oh well, they promised to send out the correct ones, not that it's a huge difference to me anyway, and I just decided to throw these on, since they said to keep them. Might swap when I replace the distributor. 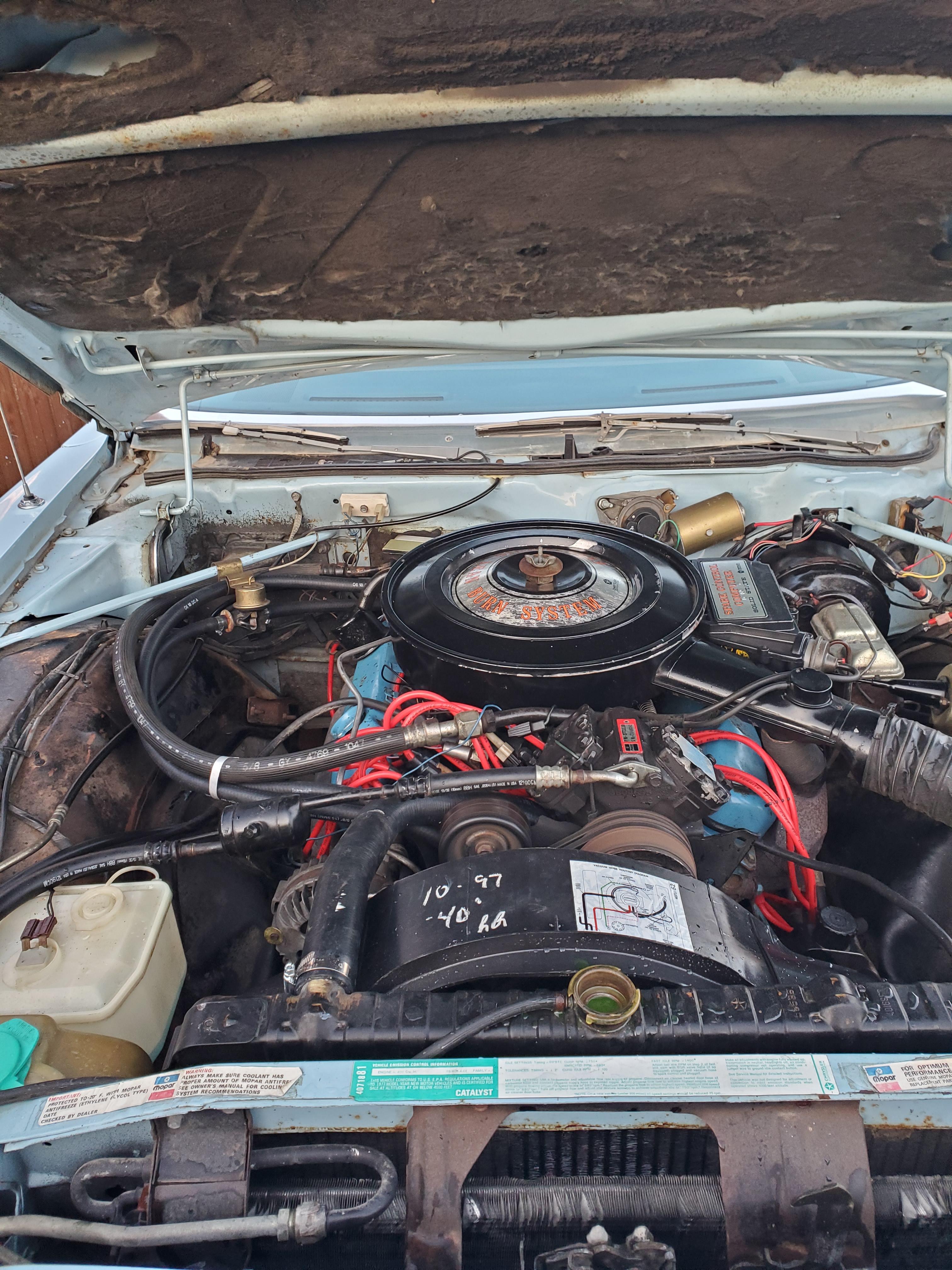 Those 2 rear plugs on the drivers side were a bit of a PITA otherwise went smoothly. Plugs looked nice and tan. Champions, have no reason to think they've ever been replaced. Obviously stuck with Champion replacements. 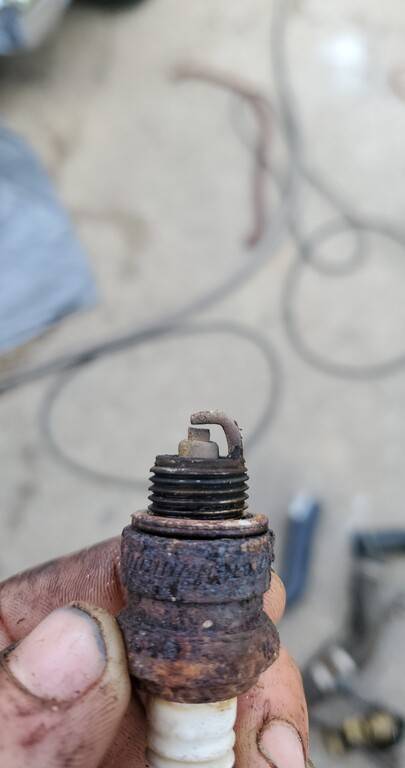 Hoses were absolutely shot. Found out I had a coolant heater. Saved it and put it in the box of stuff I keep, but have no idea why. Lower hose was beginning to split, and the heater Hoses had some nasty swelling at the core, all on borrowed time. 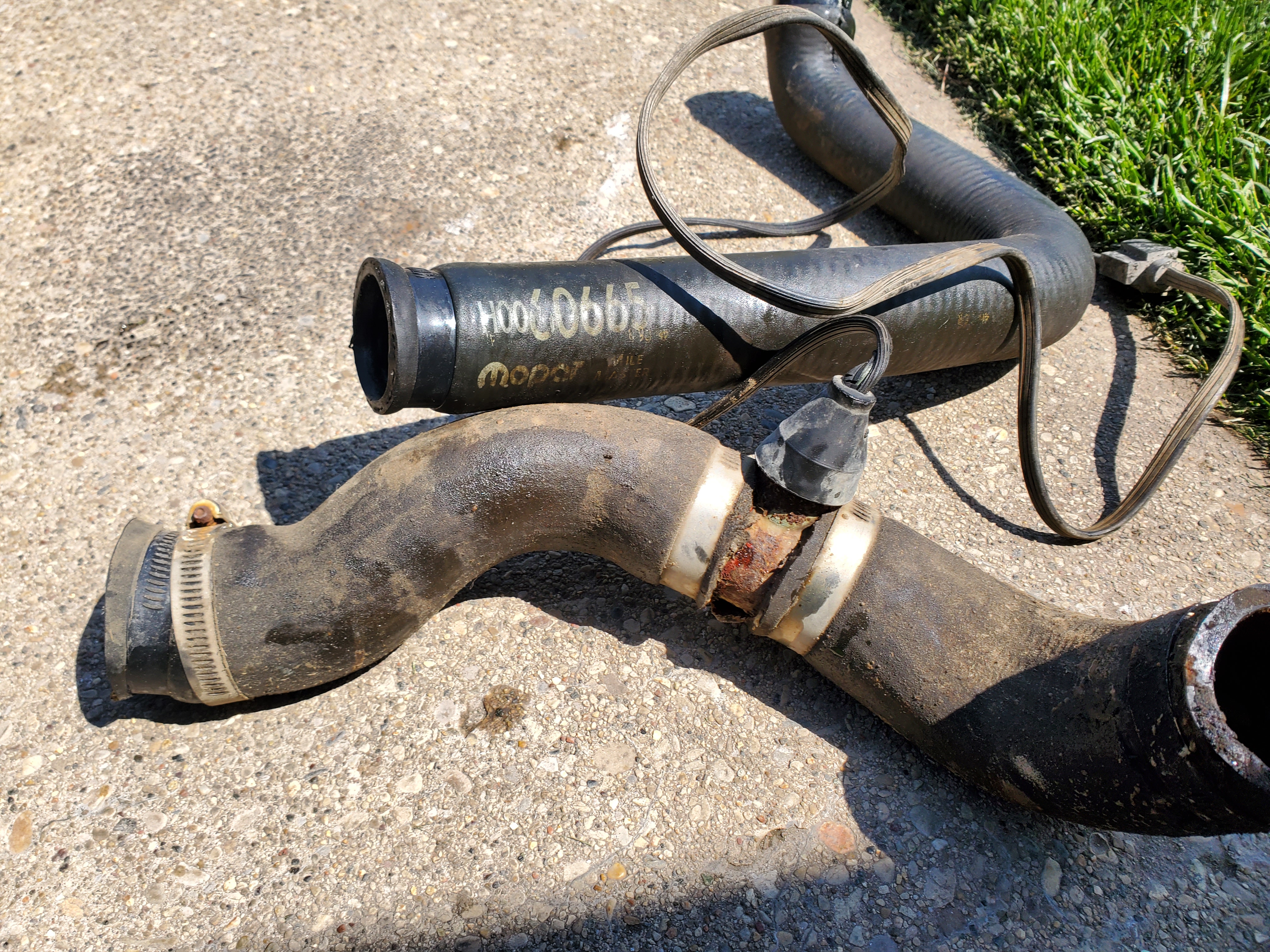 Belts came apart in my hands when wrangling them around the fan. All in all a productive day. Everything works, and the heat is spicy hot.

Finished with a wash, just because I had a product I wanted to try out. Turtle Wax has a "Hybrid Ceramic Wash" and it was on clearance. Suds are really lacking and the mix ratio is ridiculously high, but it does leave a nice finish, and sheets off water well. I'd say a 6/10, works, but needs work.

I can't get over the condition of this car...looks like the cars you could find on a used car lot in 1980.

Thanks for all the pics! My experience with Lean Burn either it worked or it didn't little to no in between. Looks like you have a "good one". I'd run the LB til it goes, it can deliver good mpg in the C bodies.

Mr C said:
I can't get over the condition of this car...looks like the cars you could find on a used car lot in 1980.

Thanks for all the pics! My experience with Lean Burn either it worked or it didn't little to no in between. Looks like you have a "good one". I'd run the LB til it goes, it can deliver good mpg in the C bodies.
Click to expand...

Thanks! I appreciate it

I agree about the LB. Seems to work fine, so it's definitely not a huge rush to convert it over for now.

That's a sharp ride you've got there.

Today was my daughter's 3rd birthday, and we had a lot of fun. Went to the park, had a small party, some pizza and cake, her friends from the neighborhood came to play and a sunny, albeit chilly, beautiful day. I happened to be off, which worked out great.

Of course after a full day, starting when she got up at 630 AM, around 600 PM, the birthday human tornado was still nowhere near tired, shocking right? So we decided to go get the Chrysler and go for a cruise. Since it was her birthday she wanted to get some ice cream, and then go for a ride, I was happy to oblige. We found a crackly distant AM rocker from somewhere across lake Michigan, and ripped down the Eisenhower Expy downtown for a little jaunt. Dad finally replaced the worn throttle return spring(s) and solved the gentle throttle stick that was becoming an annoyance too, which her help of course.

Her current favorite artist is KC & The Sunshine Band, what a coincidence this came on. Totally normal for a 3 year old in 2021 I'm sure!

And all tucked in for the night in its nice garage. 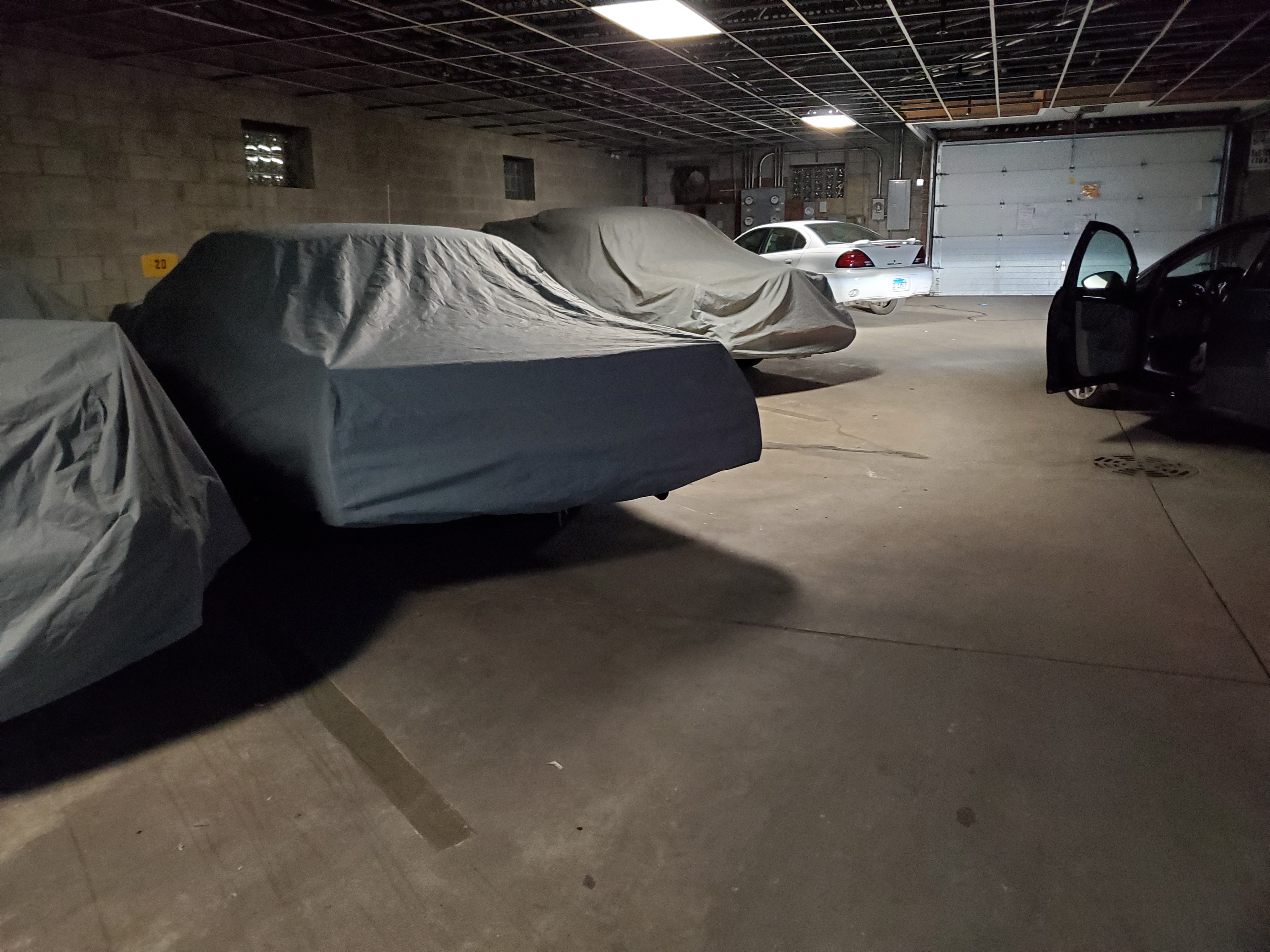 Not really much "car stuff" but I've always viewed them as an extension of who and what we are. Hope you guys enjoyed. Have a great day. 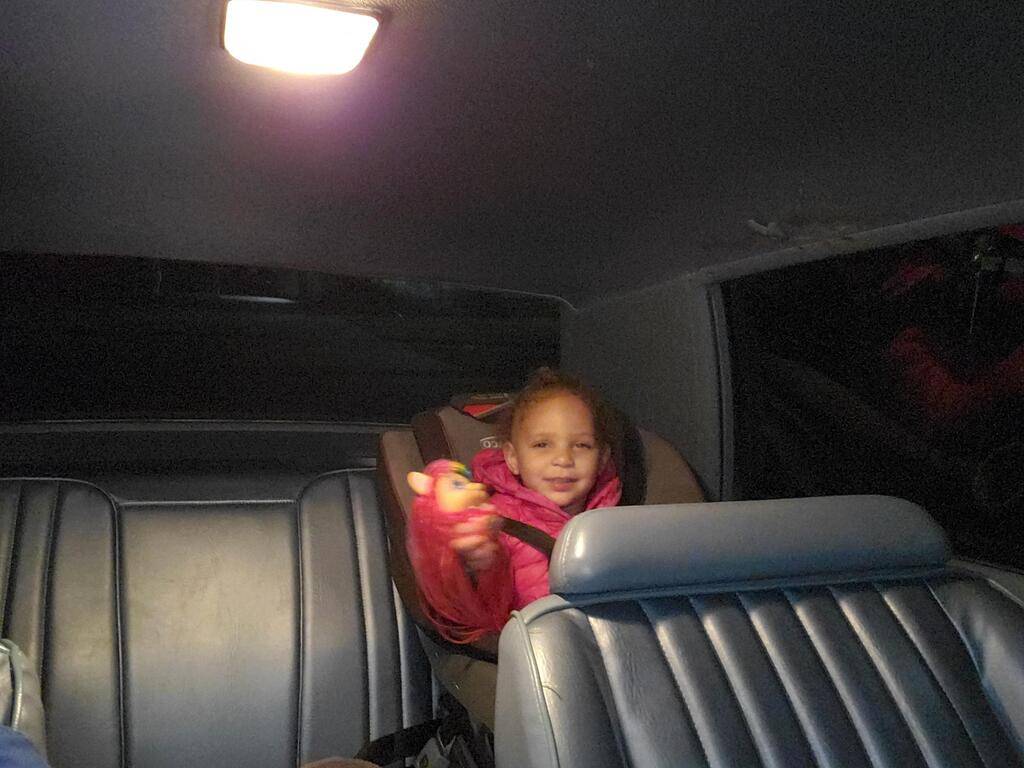 Well Lean Burn went to heaven today. Had a no spark when I tried to start it the other day, few hours later it started fine, that was all the justification I needed to swap the conversion kit on.

Pretty nice kit from Proform, only thing I used that wasn't included was some shrink wrap tubing for my splices. Doesn't come with screws for the Ignition Module so you'll need those too. Took about an hour and fired off no issue. I did have to play with the vacuum advance adjustment to get the timing where I wanted it, and took the opportunity to give the carb a good tune as well. Idles nice, pulls hard, quite pleased.

Also hooked up my AC gauges and gave the system a looking over before it gets spicy outside. Everything seems to be in order, and it blows cold, still R12. Not a bad way to spend an afternoon. 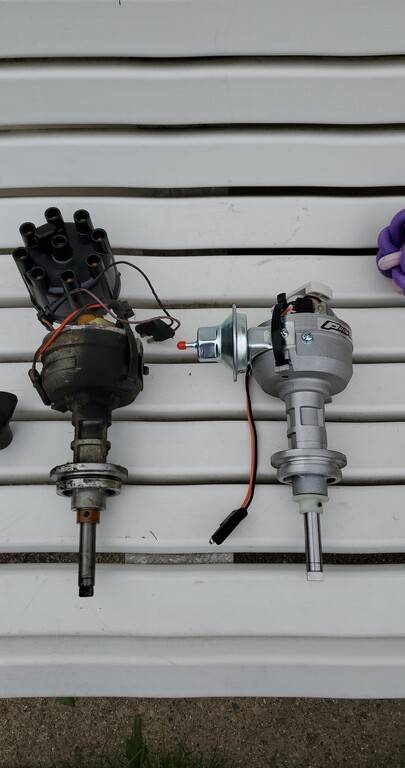 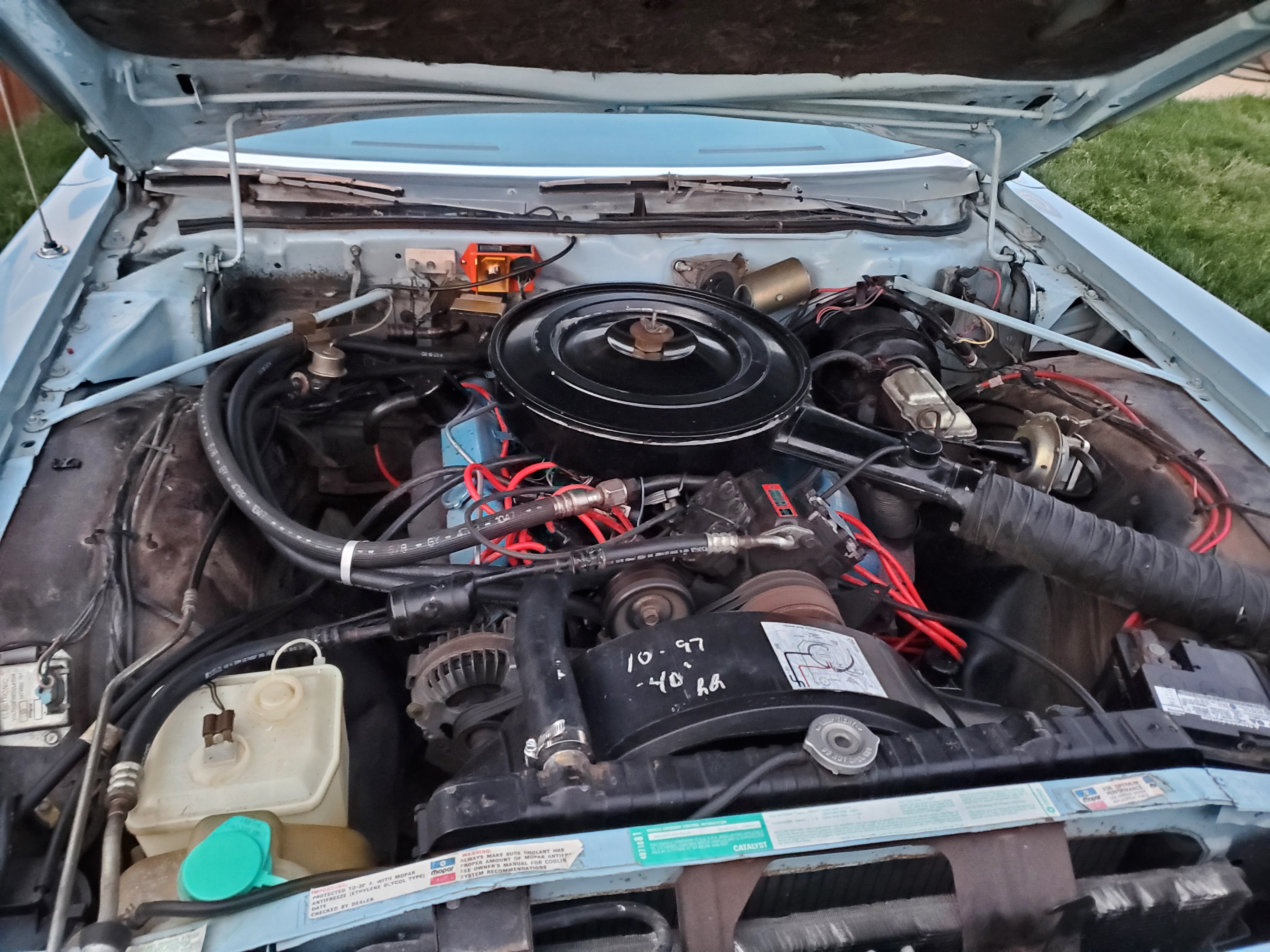 I just saw your post, kept me up an hour past my planned bed time.
Nice looking ride, the factory road wheels from the white car will really add to the looks!
Keep up the good work, and keep posting pictures!

Just FYI, the factory location for the ECU is left of the ground strap. You can see the holes...

My OCD kicking in...

Mr C said:
Just FYI, the factory location for the ECU is left of the ground strap. You can see the holes...

When I tried those 2 holes, it wouldn't sit flush, and the ground strap was just in the way of the right side of the box. This worked, doesn't look too bad.

Very nice Newport! I was curious what the fate of those MN auction cars was, it's great to see yours turn out like it has. And I love a big blue Chrysler!

Good work, it looks great! What new carb did you use?

Thanks guys I appreciate it! Nowhere near the quality of some of the great builds I see on here, but for a car I plan on keeping, well, forever, whatever that is, just picking away at the issues one at a time and enjoying it on the way.

The carb was swapped before I got the car by the guys who bought it at the auction. Some flavor of Edlebrock, and it was definitely out of adjustment. Also had the vacuum lines flip flopped, and the cruise disconnected. After some tweaking its a good performer, MPG is decent (well relative to what we're talking about here lol) and it's got a nice snappy response. No hesitation, surging or anything else. Idle is nice and smooth as well. I would have probably gone for an older style Thermoquad, but this is fine.

Now that I've actually driven it, the combo of the new ignition system, proper timing and carb adjustment, it's really like a different car. No not fast or anything but it pulls hard all the way through the Rev band. Definitely quicker than my Oldsmobile!

Georges77 said:
When I tried those 2 holes, it wouldn't sit flush, and the ground strap was just in the way of the right side of the box. This worked, doesn't look too bad.
Click to expand...

Okay, but it's not supposed to sit flush...the factory location is designed to have an air gap behind the ECU for cooling.

Mr C said:
Okay, but it's not supposed to sit flush...the factory location is designed to have an air gap behind the ECU for cooling.
Click to expand...

Oh interesting. Well it works, if it's an issue at some point I'll move it

Better to move it now and be done with it IMO. If at some point the heat fries your ECU it will leave you stranded as I doubt you'll have a spare one in the trunk.

Its moved! Thanks for the suggestions guys, appreciate it. Had to enlarge one of the holes, other one was fine.

93 here today, and didn't have much airflow from the drivers side vent. Figured something fell off, or it's blocked, it was blocked lol.

Used a long grabber thing, and went in there and yanked up a massive nest of some kind of insulation material and fabric stuff. Came out to be like a 6 inch around ball when done. Works now! Car is nice and chilly even in traffic in the full sun

Thethee: I do keep a spare in the trunk with a cap, ballast, rotor, voltage regulator, and a couple plug wires. Just in case

I carry the same kit on my electronic ignition cars. Have yet to use them except for testing.

in over thirty years of driving these cars, I had only one ballast ever go bad. Still carry em in the trunk…… just in case.
You must log in or register to reply here.