The carb and manifold came with a divorced choke but since I planned on not running a choke I blocked the cross over. I didn't feel like taking the intake off again so I got the electric kit but I've discovered a leak on top of the valley pan so I'm going to have to anyway. I'm having a hell of time with that...
C

Is the metal valley pan itself leaking (oil and/or crankcase vapors) of is it where the cyl head and manifold are contacting each other.

By observation, there is very little real performance at WOT to be gained without a choke butterfly in place. Better to leave it there than to take it out. Trying to drive any car without a choke can be problematic at best, especially in cooler weather. Much less cold weather.

At an intake bolt under the manifold. Without getting into to it on this thread, I have to check my clearances and see what I can do to use gaskets...
C

Intake bolt which holds the intake manifold ON from the topside is what I used. Bolt + flat washer + Thermister > inatke manifold.

I have a bigger problem now, I'm getting my 12v off the alternator, which is a factory bullet connector but it blows an ignition fuse when I ground it, at least to the manifold. Does it matter where it's grounded like the carb...?
C

Better download the FSM from www.mymopar.com and compare the wiring schematics to what's on your car. Just to make sure of what's on the car.

It looks right except I don't have that choke controller. Any diagram pre-73 doesn't even show a choke, didn't they use them before that ? Maybe I need that gizmo. The Edelbrock worked fine hooked up that way.
C

That elec assist OEM choke thermostat assy was not used in '72, just after that.

Go with what works, even if it might not work for other applications.

On TQ's but not all elec chokes used those. Thr just another emission device... Didn't an AVS have elec choke at all ? I hooked up their gizmo and it works now. Wonder whats inside that thing, it's not big enough for a relay. Thanx for the schematics, I did learn that 12v I'm using is for a carb soleniod...
C

No OEM AVS used any kind of elec choke mechanism, but the current aftermarket AVS, AVS2, and AFB can be had with or without an integral electric choke. By 1970, the well the thermostat went it was a separate item and made of stainless steel to heat the thermostat quicker so the choke would come off quicker, for decreased emissions, which is good. Rather than the prior cast iron well which probably took a while longer to get hot.

In the case of the carb solenoid, it was probably a carb idle solenoid. Two uses, possibly . . . one is to set the idle with an energized solenoid so that when the electricity stops, the throttle goes to a lesser idle speed so the engine will stop quickly. On some engines, the hot idle speed was over 800rpm and the engine would "diesel" when the ignition was turned off, otherwise. The other use might have been to increase the idle speed a bit when the a/c compressor was in use? But not all vehicles used them, so a loose connector was not connected to anything.

The later 70's and up used choke systems with a heater.
there are 2 choke heater control devices as i recall that attached to the intake on the passenger side in the rear . The power for the choke heater was controlled by an oil pressure switch so if the key was left on the choke wouldn't open making the car unable to start because it was cold and the choke was now open.

Cars with the crossover blocked as one should with today's fuel chemistry that are well tuned - need little choke to start. The rectangular controller has been seen on ebay but they want a lot of money for one. Electric choke heater is a good idea and the aftermarket one looks nice. Only $50.00...

The carb solenoid lead I used comes directly off the Alt. so it too only
energizes when running. I tried running without the choke plate and it was a bear to start. Putting the plate back in seemed to help and then I thought might as well go all the way. Now I'm finessing the pull off rod. The Holley 45-267 Choke delay looks to be a good substitute for the OEM device. If I would have know about it I might have stuck with the divorce choke but really wasn't sure which way to go as far as unblocking the cross over. The Holley tech had no idea how it works but it makes a safe ground in addition to it's real function.

Your heating element on the divorced choke is just a add on to make it pull off faster. It does not have enough resistance to run continuously(maybe it could, you would have to measure ohms). It is grounded to the intake by it's mounting. You could add a resistor to the supply power to allow it to operate continuously.
I think you have it wired to your alternator through the field wiring which is why your popping the fuse. That circuit is not designed for a load, it is a isolated field to load the alternator. If your attached to the large stud on the back of the alternator and it is popping a ignition fuse, someone has rewired your car and ?.
I removed mine altogether and it is difficult to drive at first. I was going to maybe add mine back and use a heated divorced choke unit. But between the cost of the choke and the resitor/control switch it's more than the add on electric choke that Big John mentioned. I understand not wanting to buy extra stuff for a trial period. They are the best street carburetor ever so whatever it takes to run one is moot.
Good luck and keep us updated if you would please.

The harness I have has 2 blue wires that come off the back of the alt spade clip. 1 goes to the ballast, the other is for the solenoid. On the attached schematic it looks like the ballast lead is tied to the OEM elec choke control...? IDK... The Edelbrock used the same 12v source and I grounded that to the coil bracket bolt, no problem but switching to the TQ I need the delay. Don't know if the Eddy choke mounted on the carb has anything to do with it..??? 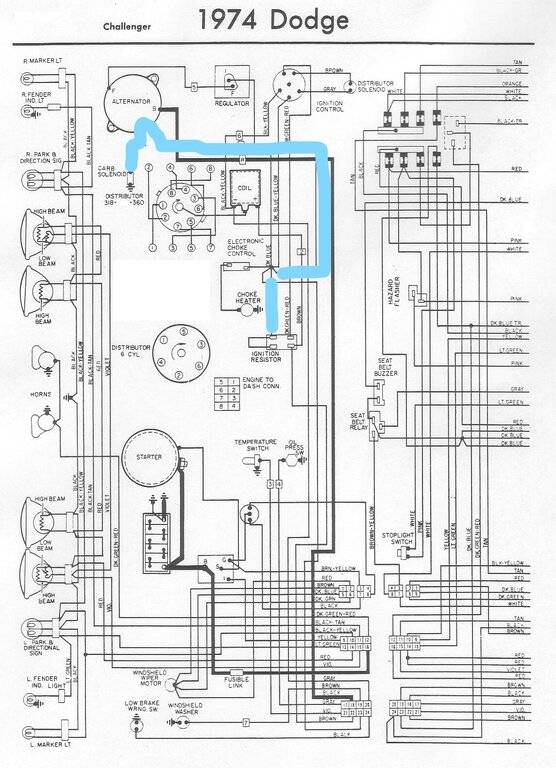 I would unwrap the wiring harness tape and look at that 6-wire junction. The junction can be in poor condition with green corrosion to add resistance and current draw. I got around this problem by wiring an aux fuse box off ignition power terminal at the bottom of the main fusebox. I installed a fuse and ran a wire from the aux fusebox to the electric choke. I had to redo the junction as well.
You must log in or register to reply here.

Where to hook electric choke