Yet another "erratic at cruise"

There's an Uncle Tony's Garage video where they do some back-to-back accel tests on the side of a major highway. Distance and speed. On a '72 (or there abouts) Charger 440. One of the carbs used was a Summit carb, which ran better than the others did. Which got me to wondering "Why?". Which is when I discovered the annular discharge venturis and that it was an old Ford 4100 4bbl from the 1960s or so design.

At one point in time, about the middle 1980s, Holley came out with a re-do of that old Ford design 4bbl carb. As everybody was seemingly fixated on the Holley 4160 0-1850 which most speed shops sold "cheap", that's what people bought. After a few years, the Ford/Holley 4100 was discontinued by Holley. Don't recall anything about the annular discharge venturis on them, though.

Thanks for clearing that up. Now that I read your post, I remember reading somewhere that the summit was an updated ford 4100. It seems like it has a lot in common with a holley, but the castings are split horizontally as on a Carter....

I did see that uncle Tony video, where they compare the carburetors. But reading through the comments (from Tony as well) it is clear that they knock off one of the ignition wires at some point during the test. So I don't know if that video can be considered anything but entertainment?.
Another youtuber Thunderhead289 speaks very fondly of the summit carb (ford 4100) for drive-ability as well.

The Imperial is back together now. Hopefully test drive with the new chain tomorrow. 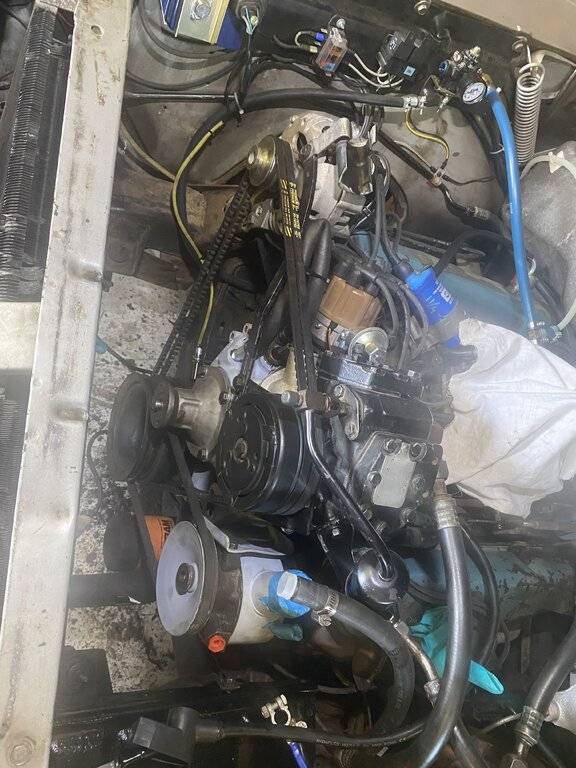 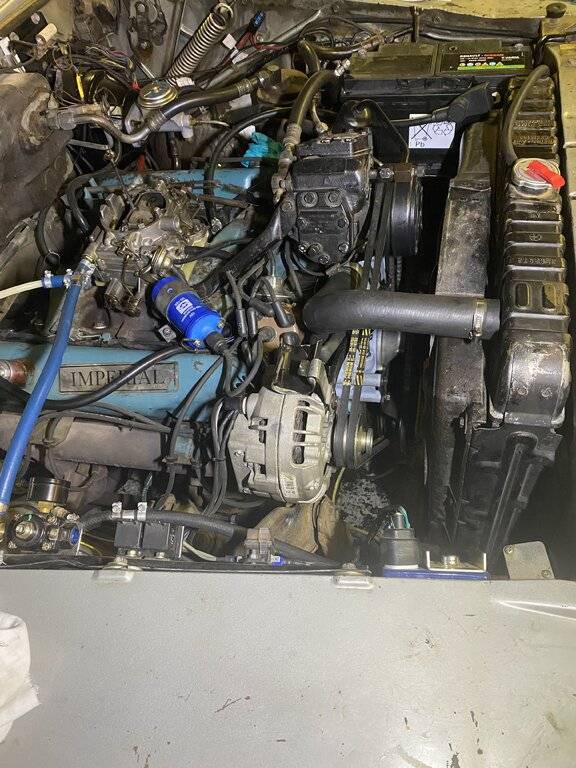 I had a street avenger that I modified with annular boosters. If Id buy a carb again Id go with a quickfuel... but i now have an efi.

Well the idle is nice and steady and the timing mark does not jump around anymore....


But the original problem still persists...
Not a very big surprise, but after seeing pictures of sheared nylon gears, I do not regret changing the timing chain.

Now I think I will start making an adapter for this guy:
According to the stamps and casting marks, it is a 1850-4 from 1992. Supposedly belonged to someone, who could not get it to run right on a small block chevy. It seems quite unused as the screws and jets are not "mangled" in any way. I really can't find anything wrong with it other than the accelerator pump lever was adjusted wrong.
The jets are #66 (or 99?). Any inputs to whether that would fit a stock 440 mopar are welcome. I do have a wideband AFR gauge installed, but it would be nice to know if I might as well start sourcing jets now. 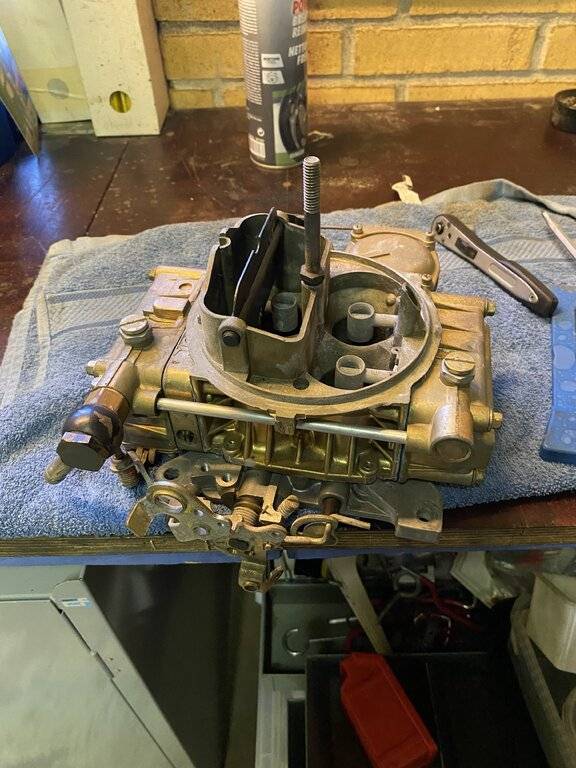 The 1850 which Holley began selling as an entry level 4bbl, had the universal throttle linkage and had lost any sort of automatic choke mechanism. BUT, you can add their electric choke kit to it. Not sure if you could interface it with a Chrysler divorced choke thermostat and screw the choke pull-off into the carb body (IF the screw holes are there, but maybe untapped?).

The "-4" in the number relates to the production run/age/version of the carb, which is probably not significant except to them.

The jetting and ALL adjustments and such can be found in the "Specs" section of the Holley Carb www.holley.com website, as I recall.c Where you can probably compare it to the OEM-spec Chrysler Holleys, as to jets, power valves, metering plates, etc. Might seek to emulate the OEM Chrysler jetting and power valve, but things might be pretty decent as they are.

Glad you got the timing chain in and the engine running as desired. Please keep us posted on your progress.

One carb heat insulating spacer/adapter - from narrow pattern on the manifold to the wide (new) pattern on the carb. Made from epoxy/glass composite. I like to make fabricated parts like this by gluing a 1:1 drawing on to the material. 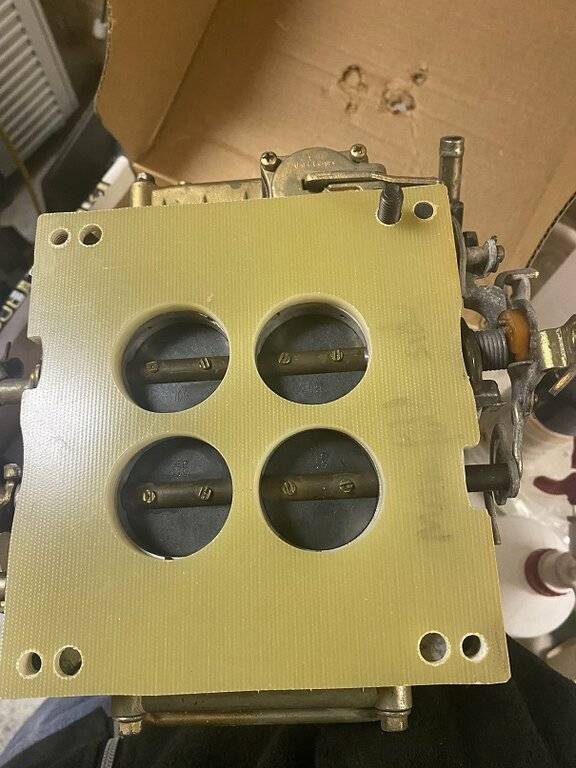 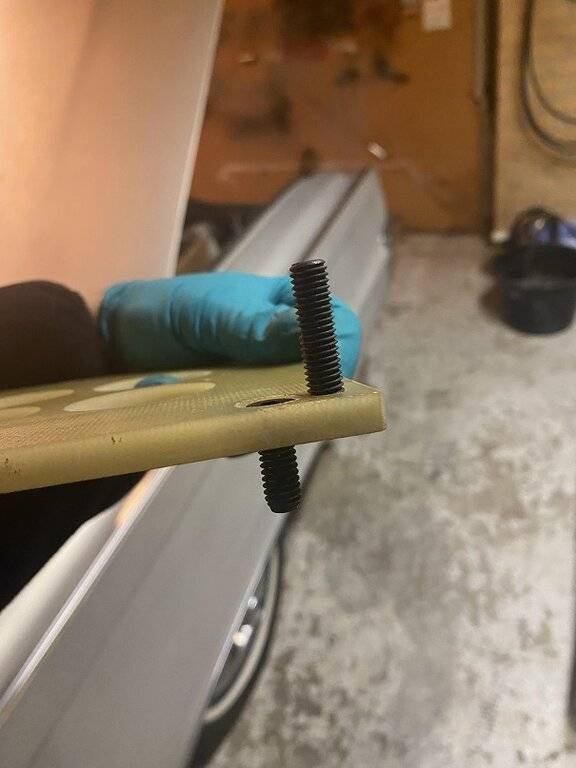 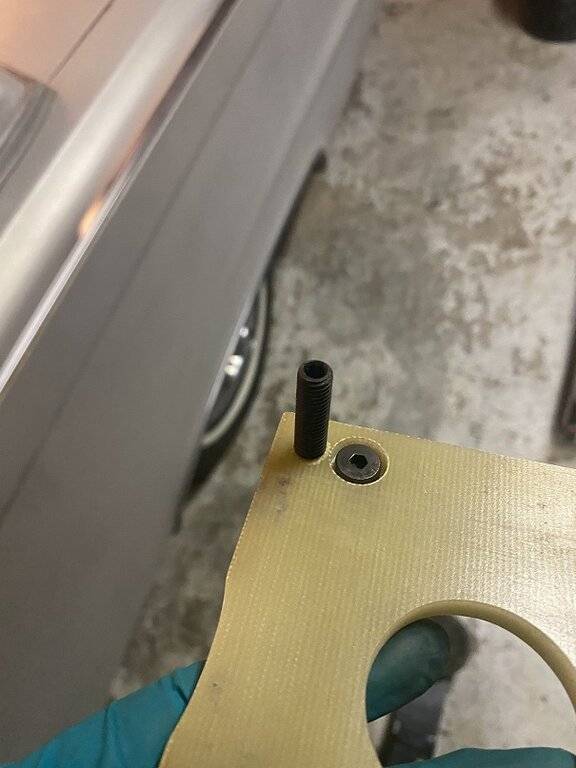 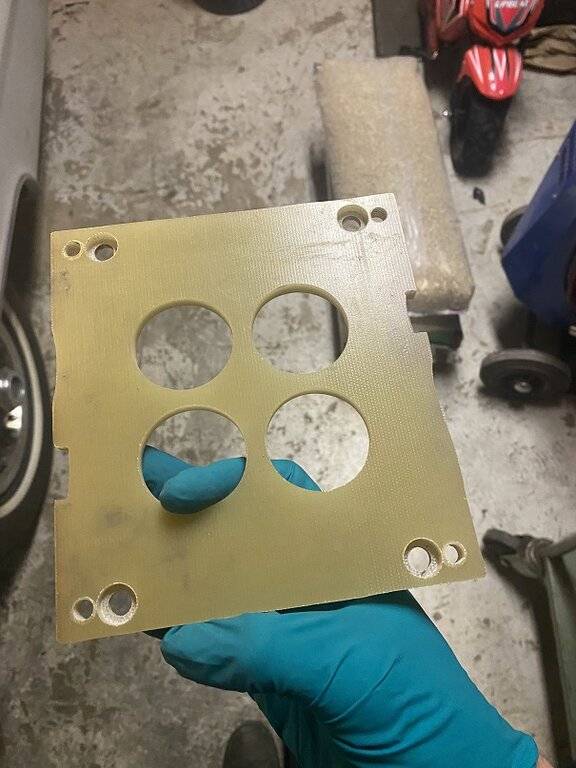 So today I changed this: 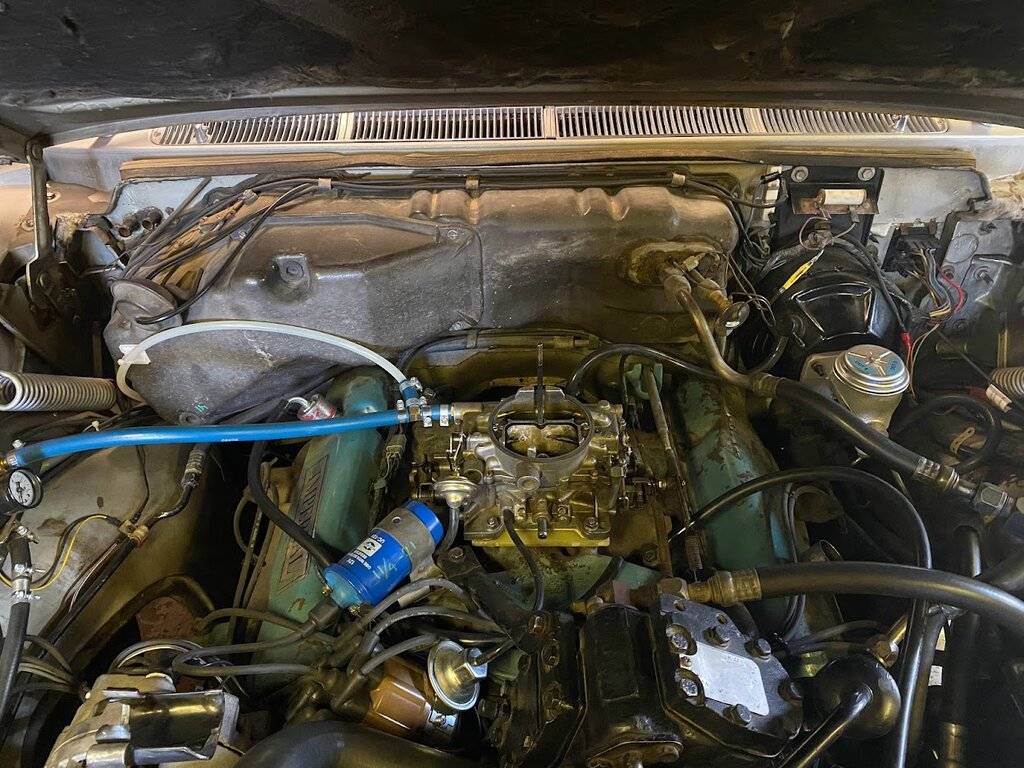 and using the adapter: 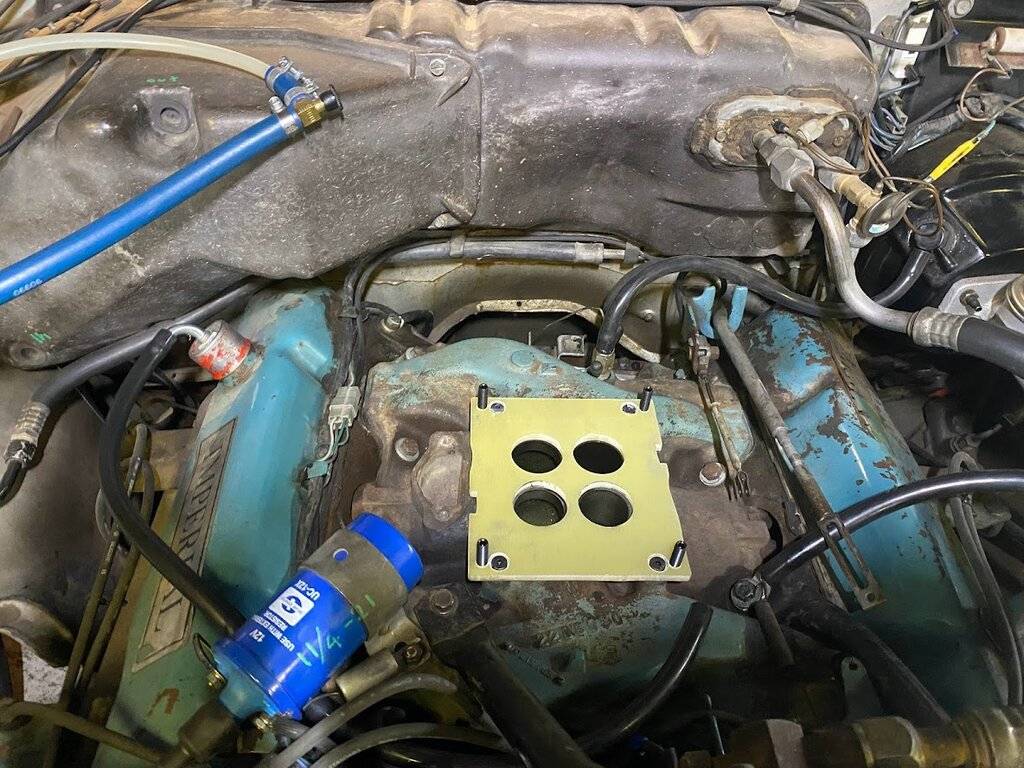 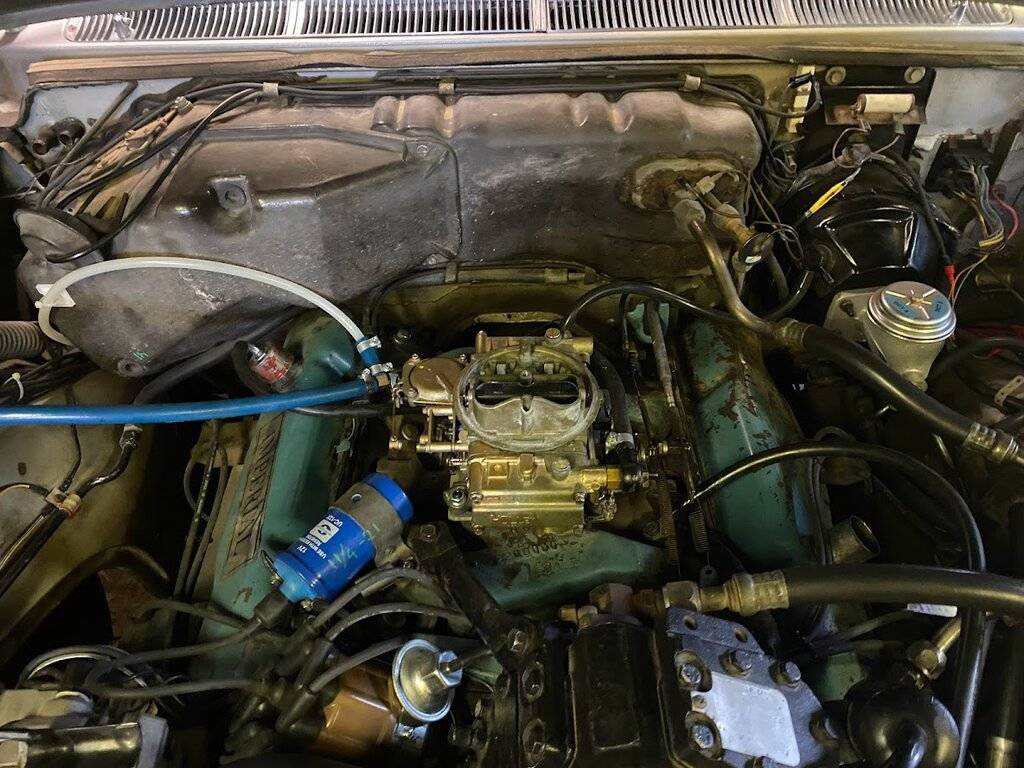 To my big surprise it fired at the first turn of the key and idled.
It was running quite rich, so I turned the idle mixture screws in, so they are now at 1 turn out. And set the float heights a little lower.
On a short trip without air cleaner, it cruised at AFR=13.5 (maybe a little rich) and hard acceleration at AFR=14-15 (too lean, so I am guessing the power valve did not open)
The Holley 1850 has the standard 66 jets, but the power valve is a 45 (i.e. opens at 4.5" Hg). So most likely the main jets might be a little too large and the power valve should have a higher number? This engine makes more than 20" Hg at idle. Suggestions to jet and power valve size welcome!
From the sound I would say the secondaries seem to open.
I will make a temporary air cleaner bottom plate (with a 5" hole to fit the holley) and hopefully take a longer trip tomorrow if the weather permits. 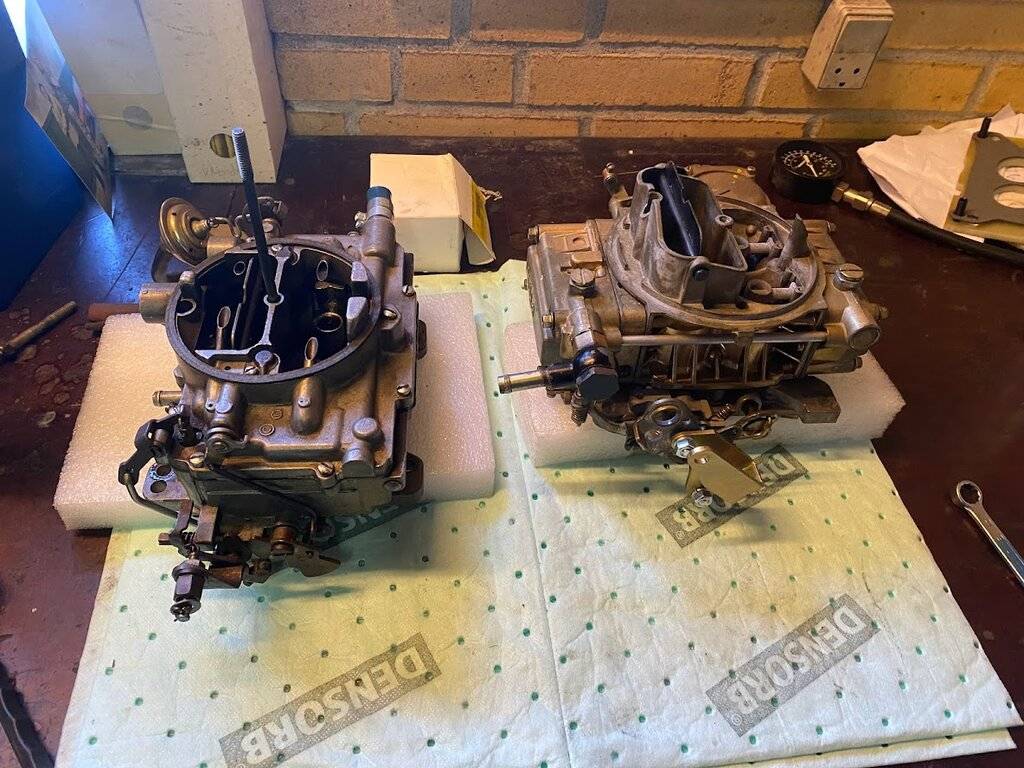 Most Mopar B/RB 4160s were jetted at "65", as I recall. So your "66" is one size rich. Most Mopar power valves were 5.5" Hg opening power valves. Your at 4.5" Hg will take more throttle to open at a lower intake manifold vac level. In one respect, as long as it doesn't spit/sputter/backfire under throttle (before kickdown/downshift) or feel a bit weak until the power valve opens, all should be well.

Might need to also use a vacuum gauge to gather data on the power valve operation. You can also check the power valve with the trans in "D" and the foot brake firmly applied. With it in "P", check the vacuum and idle mixture. With the foot brake firmly applied, put it in "D" and note the idle speed, mixture, and vac level. Then slowly increase the throttle against the brake until the intake manifold vacuum drops enough to open the power valve fully. Then, at that power level, look at the mixture when it suddenly richens and the vac level.

When I was trying to get my Camaro 4160 dialed-in better (as an OEM replacement stock Holley 4160, with a two-stage power valve). With the car in "D" at hot base idle, it idled at 10.5" Hg, with the first stage of the power valve opening at 10" Hg. As I slowly loaded the engine against the foot brake, the vac level dropped and a "1 step" enrichment started at 10" Hg, which is where the first stage happened. With more throttle and more brake, when it hit 5.5" Hg, it richened considerably more from that level on. The two-stage power valves allowed the main jets to be as lean as "62" at cruise, but as soon as manifold vac dropped lower than 10" Hg (as in going up a hill), it slightly richened to what a normal "64-65" jet would have been. But you should have a single-stage valve, as the two-stage valves didn't start to happen until about 1973+ at the OEM level, or thereabouts. 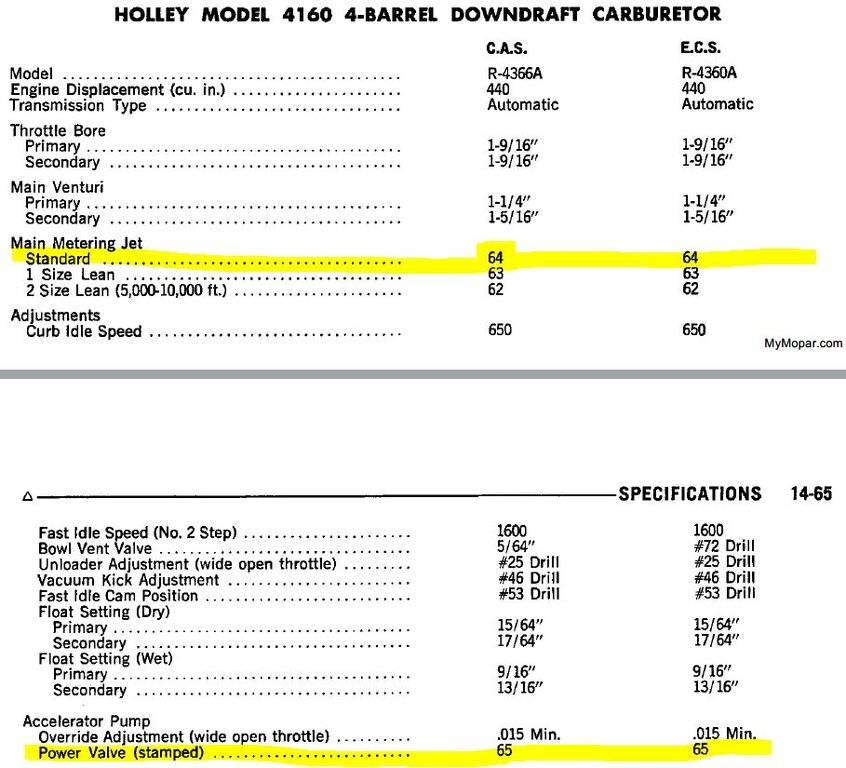 I did not try getting the power valve to open with my foot on the brake. I think that would end with a burn out!
C

Consider that by 1970, Chrysler and others had already leaned their mixtures a bit. Not very much, but just a tad, like one jet size leaner. See what the 1967 FSM indicates, too.

End result, as long as the drilled air bleeds in the top of the venturi cluster are almost identical, between the years, then just a jet size might do it. Still, two jet sizes richer than indicated will get you in the ballpark with ethanol'd fuels (E10). For which "stoich" is closer to 14.2 rather than 14.7 at sealevel.

Good point on the E10 having a lower AFR to be "stoich". I do agree. I am actually running the car mostly on E5 (European octane: 100 - that would be about 94 in US). But since it is running a little rich, maybe I should go for the cheaper E10....

In any case until I get around to sourcing smaller jets, do you agree cruising at AFR 13.5 might be a little richer than it needs to be, but the only harm it will do; is make my wallet "lean"?
C

Try adding 2.5degrees BTDC to the base timing and see where that puts things.

The less ethanol in the fuel the better for the metal in the fuel system. One jet size "rich" is not going to really affect things, operationally.

You can buy power valves and jets on www.holley.com or via www.summitracing.com, if desired. But for now, just drive and enjoy, I'd suggest.

I changed base timing from 8° (recommended by Ehrenberg, who I got the distributor from) to 11°. It actually felt like it re-gained the low end power it seemed to have lost compared to the carter (i.e. when the carter was not acting weird). It runs very well now, sounds very potent, but I can't help worrying if it is too close to pinging even though I can't hear it. I still have to go through all the tuning steps in his instructions (which is now possible). The car weighs over 5000 pounds (+2400kg) - quite impressed at how fast it is!

So I am going the draw the conclusion my original "erratic at cruise" was caused by the old Carter. I think it was somehow unable to draw fuel consistently through the boosters - specially when hot. It bothers me I was never able to find out the exact problem. I think it could be one of those "refurbished by a big corporation, with mixed parts from all different versions of a Carter AFB"-carbs. I don't blame the Carter design over the Holley. After having taken each brand apart, I can see why each of them has their group of fans.

Do not worry about "being close" to pinging as as long as you don't hear any ping, everything is fine. He probably knows what advance curve is in the distributor, which will affect the base timing. IF you do hear it ping under load going up hill or at WOT before it might shift, then back it back 2 degrees and see if that fixes it. If it does, that would be where to leave it. OR if it pings, put some higher octane fuel in it and see if it goes away.

Checking the timing at 3500-4000rpm would verify what's in the distributor and with the increased base timing, too. For this measurement, unhook and plug the vac advance line from the carb to the distributor. Probably somewhere in the 32-35 degree BTDC total range? With the vac advance hooked up, probably closer to 50 degrees BTDC total, which is fine as that is at part throttle and not WOT.

Enjoy!
CBODY67
You must log in or register to reply here.