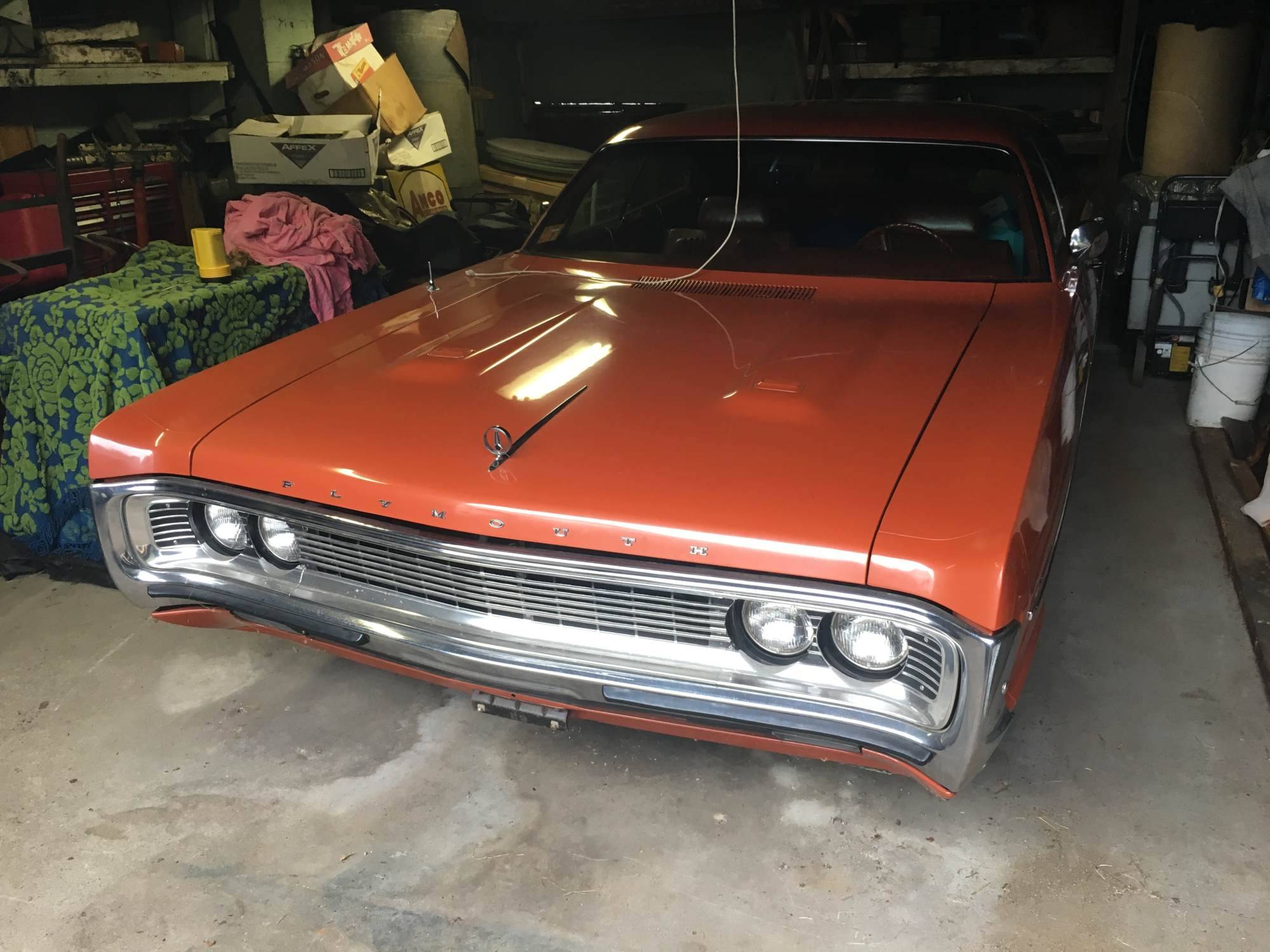 Bought a 1970 Plymouth Fury III in Nov., 2017 off Craigslist in North Providence, Rhode Island from the son of the original owner. The Pumpkin was garaged most of her life, 21,005 miles on it, a nice shapely 4door - she wanted me to take her home!
Overview Gallery

Hello Folks....Well, bought a nice looking 1970 Plymouth Fury III, family car, 4 door, 318cu, single exhaust, 2 barrel, born in Newark, Delaware. If it wasn't for the crazy metallic burnt orange color, it'd be a pretty plain car (a later hood ornament adds a bit of flare). Hasn't been driven for ten years, last inspection sticker is 1999. Its clean, garaged, 21,005 miles on the odometer and signed as actual by the son of the original owner. My personal life doesn't lend time for such projects, so its either painfully slow working on it or pay someone. What I do is start with enthusiasm and then with lack of progress pay extortion money to a mechanic . So far, got the car off its rims, mostly with existing tires, double whitewalls. Next, had the carb off and looked at by a trusted restoration mechanic (it had been rebuilt ten years ago and was fine as is). Then ran the car with a gravity bottle....and.... damn oil leak under the car. I haven't looked too close, assume its the rear main seal (there goes the budget). Today (12/22/17), finally got the fuel tank out and wow, a lot of black sludge can out. I put a neo-magnet against the sludge, some material stuck, so that's rust, should expect some though. 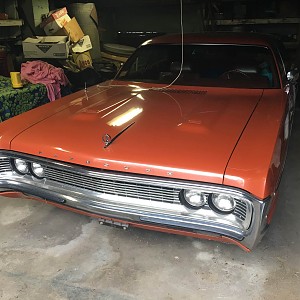 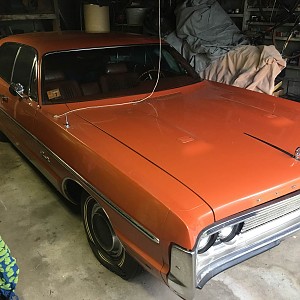 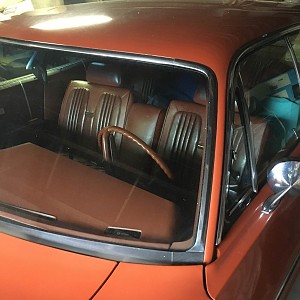 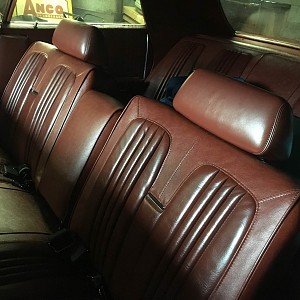 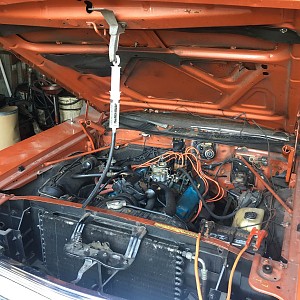 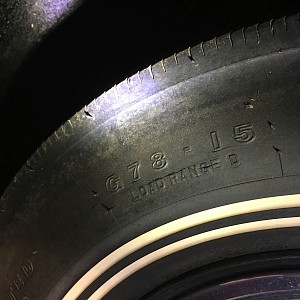 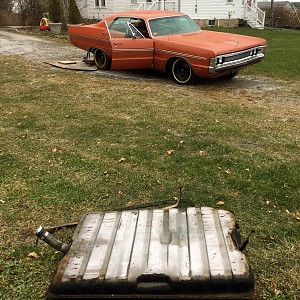 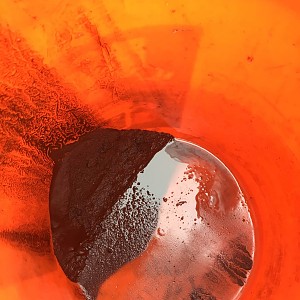 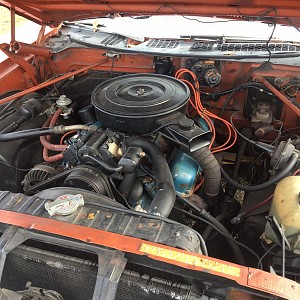 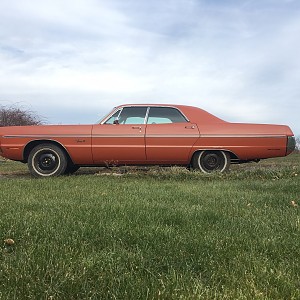 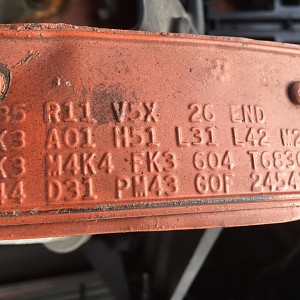 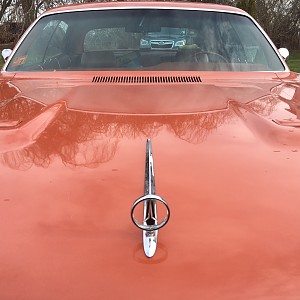 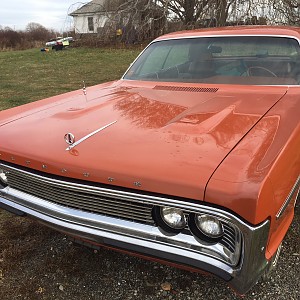 I love it but don't drive with those tires on it, they are weather checked and will blow out.
Nice.......can you post a fendertag picture.......
Looks like a very nice rust free car. That's 80% of the battle. Congratulations. I know it's correct and original but I don't think I've ever seen the hood ornament on a 70 Fury. Very cool.
Looks really good in orange.
Actually looks good in that color. Love the hood badge. We used to call them our cross-hairs to aim the car.

McPherson 57 said:
I have never seen that hood ornament on a 70? I was thinking 73 was the first year for it. But it looks great!
Click to expand...

My 63 sport fury has almost the same....
Love those Burnt Orange interiors.
Greetings, I own a 70, convertible in the SAME color. I looked up color codes, the closest I could come up with was "Vitamin C" orange. Not sure if that is correct or not. Do you have the color name by chance?
thanks jeff
FK3 = BURNT ORANGE!!!!!!!
SeventyConvertibleguy- I was trying to match the color to google results of paint chip cards and came up with the wrong color, like 69monaco pointed out, need to check the fender tag (FK3) - I have seen "burnt orange irid." or "burnt orange poly". Not sure what "irid." means, maybe "iridescent"? The paint looks flat from any distance, up real close I see small metal-flake. I'd like to see a pic of your car.
I like that alot ,,congrats.
Don't forget to have the inside of the tank recoated before putting it back in. Will save you problems in the future.
I’d say Burnt Orange also. Looks great with a Gator Grain vinyl top.
Dad had a 70 Coronet 500 Gator Grain over Burnt Orange inside and out.
I have found that it costs more to clean & recoat an existing gas tank than to just replace it. I did that to mine, saved a bunch of cash!
Love the color! That thing is awesome!
Nice car. Its great to see all original cars like this kept so well. Unique color as well
Love the color. Like the interior too. I like how it matches the exterior. The hood ornament is from a 73 Fury. I like how you kept it original, and it's still in its original form. My step-dad has a 70 Sport Fury S/23. His has a 383 HI-PO and is yellow. Two thumbs up