Texas auction of a Mopar Hoard.

This undertaking seems like a logistical nightmare and I doubt there are any rocker scientists on staff. Buyer beware I think. 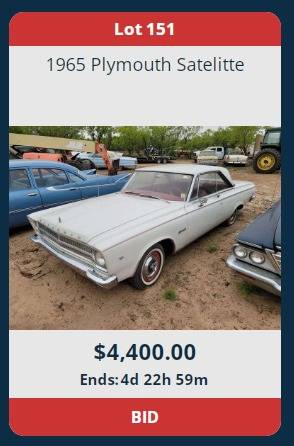 In further investigation of the web page ding/tick noise, it's neither of those... it's a Chime.

And here is this afternoons culprit: 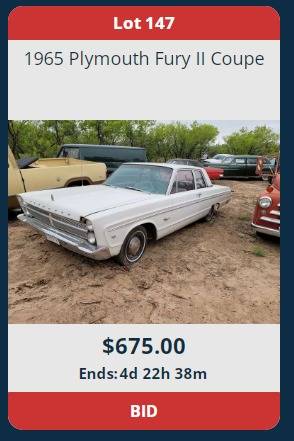 bluefury361 said:
This undertaking seems like a logistical nightmare and I doubt there are any rocker scientists on staff. Buyer beware I think.
Click to expand...

Why are they already high? They have bidders who do that? Seems odd

Looking for someone who is thinking about traveling to this auction and will be passing close to the Gulf coast from the east. If things go well I will be bidding on several items, (perhaps a vehicle). The shipping will be prohibitive so it will be worth the trip, (1000 miles each way from here, Foley Alabama).
Perhaps hook up and share gas. I can travel to a meeting point. Any takers?

Cars I'd really want to save from the list that appear to be super cheap & saveable/ solid:
67 300 (Turbine bronze car I think...)
74 Sport Suburban wagon (I'm reaching here the rust from the sunburnt paint is concerning...but I love Formals and especially wagons)
74 Newport sedan (I miss the sedan I used to have)


Cars that look too far gone but really got me going:
60 LeBaron
61 LeBaron
Both of these must have been incredible when new.

Lots of items added but nothing for the service books and paperwork.
Just the Example pictures.

A lot of cheap stuff now, that will change on auction day. So many will bid to win regardless of cost. It's already evident.
Add cost of shipping and/or transport. Plus fees

For that stack of books I'd drive down and pick that stuff up.
I think that is about 10 hours from me.

bluefury361 said:
This undertaking seems like a logistical nightmare and I doubt there are any rocker scientists on staff. Buyer beware I think.
Click to expand...

Yeah on the new stuff that at least has pictures, plenty of mystery engines under covers, LOL But hey for a buck Hemi or boat anchor?

On the most recent (part 3) of the Tube videos the guy maybe stepped in a cow pie and in one of the previous videos he was explaining that he had to sign a liability waiver to enter the property and also got a warning from 2 guys about lifting hoods never mind getting down on your hands and knees to have a look under the car.
Those two had some serious leggings on.
Imagine getting bit in the face by a rattler? I'll bet the auction logistics 'Tech' people wouldn't even dare doing the task in the field. Just picture some fresh out of college media graduate, maybe even a intern, here boy lift off the cover of that engine so we can get a picture of it. But eh, walk around with a big stick, a little pokey, pokey here and there, bang on some fenders & doors and if you hear the rattle.... back the F off.

Ha I remember one time out on a I-95 job we got stuck with doing turbidity fence maintenance one day and the guy next to me was some city boy from up North and deathly scared of snakes, as we were pulling up the fence to re-stake it I could see this 6 foot long fat water moccasin or black rat snake, but I wasn't going to introduce myself so to say. He couldn't see it and was all huffing & puffing and sweating as we were down in the swamp and out of the breeze from the open Interstate, (it sucked) I told him to drop the fence and back up right now, he responded "Why?". I replied to him "Back up NOW"! Do it NOW!
By then he saw the snake, welp he jist'bout tried to jump out of his waders, fell over backwards into the water and got soaked, the supervisor that was with us just shook his head and it was a wrap for the day... LMAO.

Just went to check bids with less than 2 days to go, and saw this LOT UPDATE PLEASE READ.
Hilarious...

"ended drilling a hole through the freeze plug and inadvertently drilled through the water jacket into the cylinder and possibly the piston, photos show the damage" 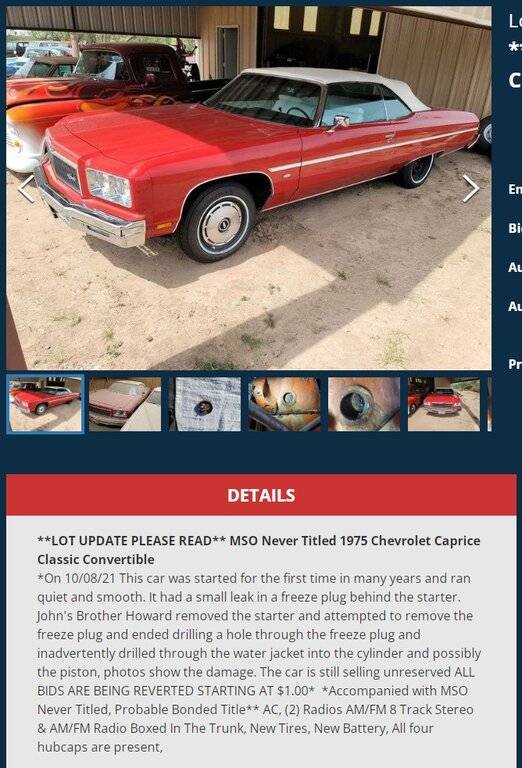 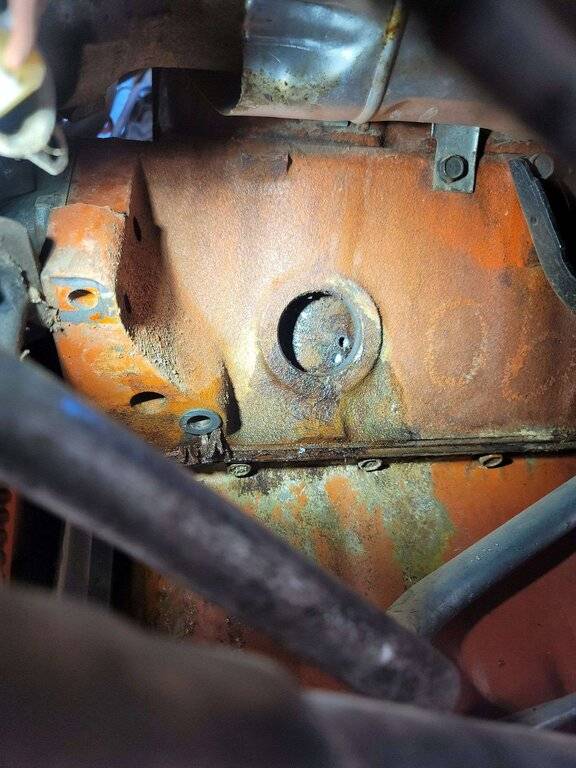 The chimes are a chiming, bids are rolling in, should be interesting.

"ended drilling a hole through the freeze plug and inadvertently drilled through the water jacket into the cylinder and possibly the piston, photos show the damage"

The chimes are a chiming, bids are rolling in, should be interesting.

Looks like he did it twice... at a certain price point it won't matter... someone will LS it... for me it's already past that price point though... plus bonded title likely... if at all. 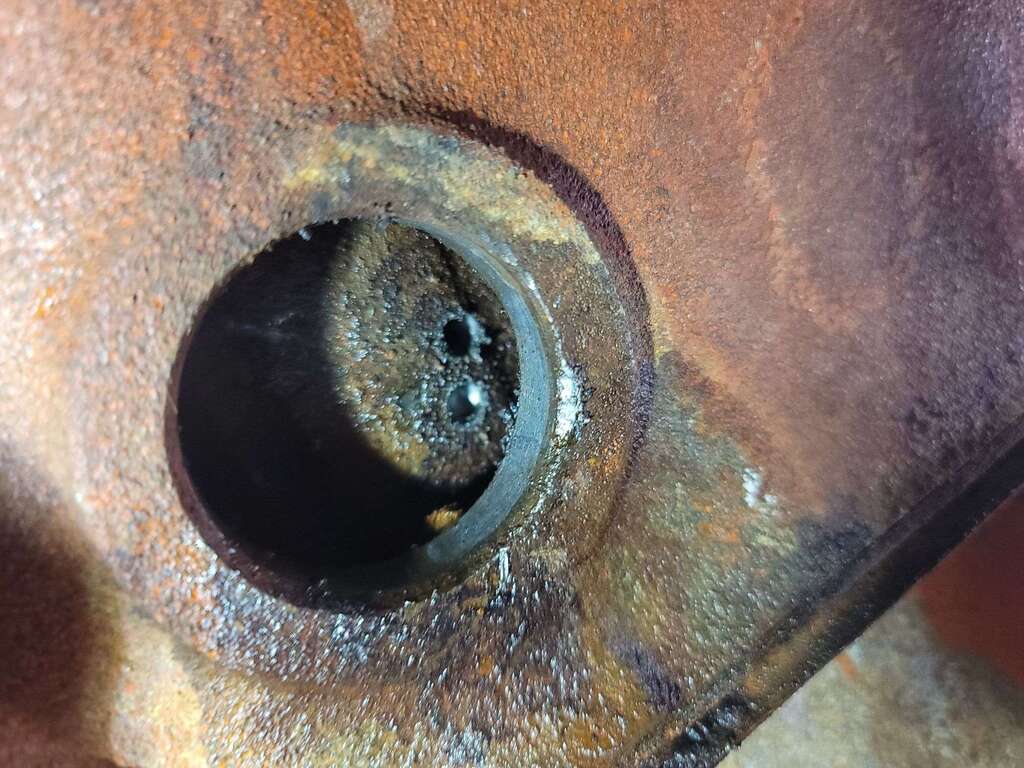 Now the manuals are listed separately. At least they finally listed them up to the public instead of an example photo.

cantflip said:
Looks like he did it twice... at a certain price point it won't matter... someone will LS it... for me it's already past that price point though... plus bonded title likely... if at all.
View attachment 490562
Click to expand...

I just thought some many people should never be allowed to touch power tools.

As far as the title goes this one has never been titled and has "Accompanied with MSO Never Titled, Probable Bonded Title" and has 859 miles on it.
Manufacturer's Statement of Origin with ownership swap in 75/76 and some signed Texas application for title in 1988.
That's why this is a hilarious boo boo. At least they are up front about it and didn't jam some JB weld in the drill holes and button it back up, a real shame as they had it running & purring like new.

On a positive note bids are back up or the same(?) at 13k and being never titled you may have to only pay sales tax on the 1975 sticker price!

cuda hunter said:
Now the manuals are listed separately. At least they finally listed them up to the public instead of an example photo.
Click to expand...

Yea now there are no photos, some have a year listing & model of the lot, but a photo would be better for the lot. WYSIWYG. No picture and a description of "Assorted Parts Catalogs & Promotional Materials/Prints" is pretty much a mystery bag in my book.
I just took a quick geeez to see if all the covered mystery engines had some uncovered pictures, most were gone but someone bid $12 on 1 covered engine, maybe he did a preview and knows what's behind the curtain.

They're really kind of shooting themselves in the foot and loosing out on a worldwide web audience with the only online type auction by not having pictures and a inventory description of the lots. A lot more parts pictures are showing now, and I know it's a big task to sort but they did announce this back in June right?

cuda hunter said:
Now the manuals are listed separately. At least they finally listed them up to the public instead of an example photo.
Click to expand...

The site is getting harder to navigate. Do you have a link?

Curiosity got the best of me... I know the date has past for the "Real Estate 320 Acres..." but here's a Google Earth view of the surrounding area with the hoard/garages circled. How big is 320 acres on this picture? I knew it was in the oil rich Midland area and thought does the land sale come with mineral rights?
A lot of pads all around that area... future fracking profits or a cleanup mess? 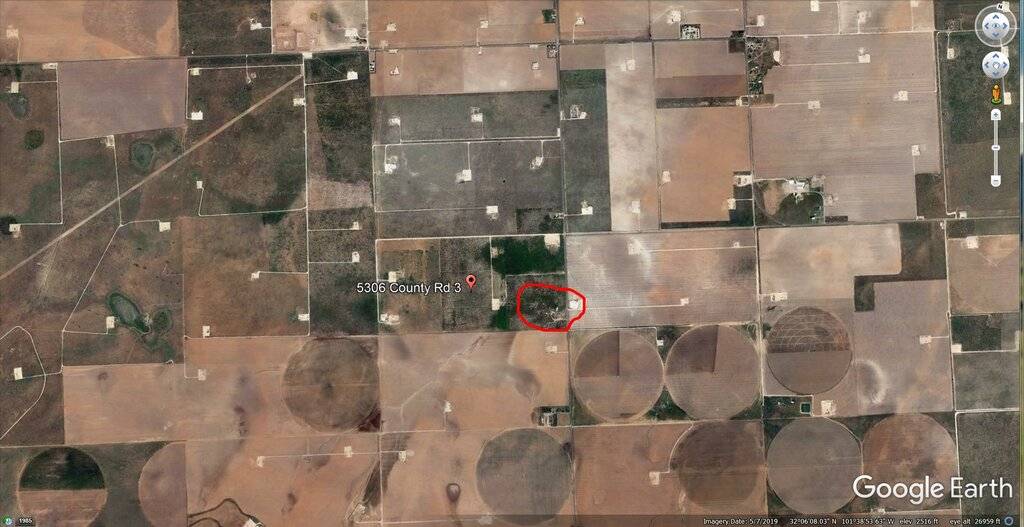 .
You must log in or register to reply here.