I acquired DL27L0D148841 from @Tobias74 earlier this month. This Polara convertible's scheduled build date was 51 years ago to the day: October 31, 1969. The color is my favorite, and I had yet to own a fusie C-body with a console, so I took the plunge and thus deviated (some more...) from my long-term goal of keeping ´only’ four fusies.

Tobias himself had scored this ragtop in August from a seller in Regina, SK. That person apparently had gotten it from the original owner, who is now very old. Here she is when she was being advertised in Saskatchewan this past summer. 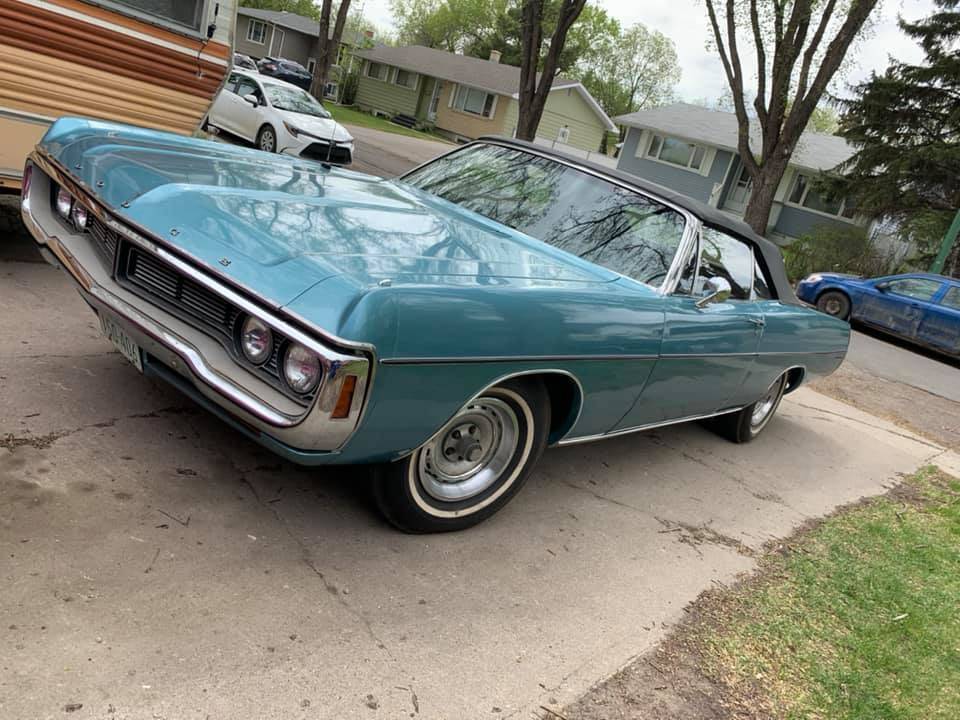 We learned in this post that the car was bought by the first owner for his wife. Tobias also told me that the 'vert was used in local harvest parades. The car must have been used for some other things as well, because the first time I put her up on a lift, I found evidence suggesting that an aftermarket hitch was at one point welded on but later was removed (see the photo below). Tobias has promised to help me get in touch with the first owner, and I look forward to hearing first-hand about the car's history. 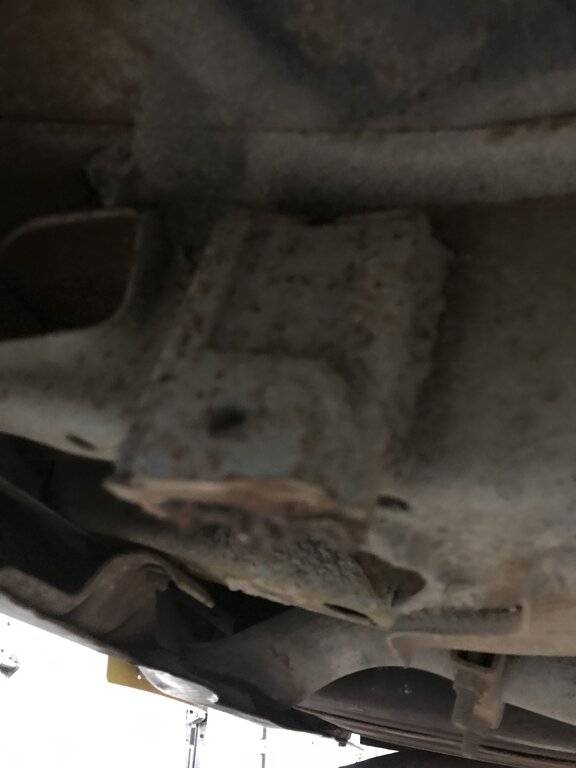 Thanks to research by @Bill Watson and @kmccabe56, and posts by @Fratzog, we know that just 25 FQ3 Polara 'vert were produced for the US market in model year 1970. Although I have been unable to find out how many FQ3 'verts were among the 144 manufactured for the Canadian market at the Belvidere, IL plant that year, their number was likely a single digit (assuming that color choices were similar for the Canadian and US markets). Bottom line, the likelihood to find another in this condition is pretty small -- hope springs eternal, but I am glad I got this one. Cherry on the cake: I like fender signal repeaters and she has the L31 option (Edit: I initially thought that the car was the only Canadian 'vert with the L31 option code, but 86/144 cars came with the option -- 85 of them by way of having the A01 Light Package).

Even if she was built on the day of Halloween 1969, Regina is neither a ghost nor a Frankenstein. She was repainted in the original metallic light turquoise. Tobias had told me that the paint job was professional one and indeed, while it is not flawless, it looks good -- among the few imperfections I found are a bit of "ghosting" on the hood (which I hope will buff out), three small bubbles and a hairline crack on the deck (Dutchman panel, driver side), a couple of bubbles on the RHS front (of which I was aware before buying the car) and rear fenders, and a couple of bubbles on the RHS rear fender extension. There is some overspray on the gas cap and on the springs, but that's easily fixed. Most importantly, the car appears to be very solid underneath. The only bondo that I could find when I put her on a lift is a bit of fiberglass on the left-hand lower rear quarter, just behind the wheel; the rest of the underside appears original and free of any structural rust.

So, what is next for the car? I have driven her for over 300 miles in a variety of settings since delivery on October 19, and Wyatt put another 60 or so miles on it yesterday. We agree that the following is needed:

1. tires, suspension, steering, mounts, driveline: the original tires were old, so new 235/75R15 whitewall tires shall be ordered at the end of the winter; the A-arms, idler arm, and ball joints will all be replaced and the steering box will be rebuilt as there is some sloppiness in the steering; the shocks need replaced front and rear too; the rear springs looked fine at reception but are now almost flat, and so they shall be replaced as well (which will take care of the overspray ). To get rid of some vibrations, the engine and transmission mounts shall be replaced, as well as both U-joints (only the rear one is on its way out, but I might as well replace both and be done).

3. the car lost its rearview mirror at some point, and the passenger sunvisor has a loose articulation system --> both shall be replaced; ditto for the high beam headlamps -- one does not work, and the shape looks goofy to me anyways.

4. with a couple of caveats, the interior is in pretty good condition: there are no cracks on the seats or the door panels; the driver's armrest is beyond salvation so will be replaced with a vintage piece, courtesy of @71Polara383's used parts inventory. As Tobias had noted, however, the dash is in sorry shape and needs a full restoration. The rimblow steering wheel has multiple cracks, and the horn does not work, so it'll be replaced when the winter is over. I am not sure if I will replace the carpet right away because, despite its having faded (to a darkish gray) and having a tear in front of the rear seat on the driver side, it is in pretty good shape overall.

5. while the dash is out, I plan to take the opportunity to refurbish the radio (which rich now only outputs white noise) and replace the speakers (for which I plan to follow the advice of @Ross Wooldridge in this thread).

6. finally, the power window motors all seem to work, but the mechanisms need servicing. That is in the cards.

Hopefully, that should do!

Edit: I forgot to mention the brakes. The four drums work fine 99 percent of the time, but at very low speed (parking speeds, approaching a red light or drop sign), the power assistance seems to disappear. The booster will be rebuilt, and the master cylinder may get replaced.
Last edited: Nov 3, 2020

Beautiful score again Ayilar - it has your name written all over it.

At the rate you are going you should be overloaded just like me in about 40 more years! Keep up the good work!

Nice score, I lost track though of the size of your herd

You keep saying its likely the only one with the fender mounted turn signals that went to Canada. I keep saying check your tags ....

Great score, congrats! Maybe it towed a float in that parade.

detmatt said:
Great score, congrats! Maybe it towed a float in that parade.
Click to expand...

Thanks! Yes, that is certainly a possibility -- and why I'd like to talk to the first owner. Would be great to get some pics of the car in its earlier life, too...


polara71 said:
You keep saying its likely the only one with the fender mounted turn signals that went to Canada. I keep saying check your tags ....
Click to expand...

I have fixed the post above, and I've also fixed my earlier post on the same matter in the thread that @Tobias74 started about DL27L0D148841 two months ago.

In short: you are correct. Although just 1 of the 144 cars sold in Canada (139 C-code VON and 5 built to US specs but sold in Canada -- see here for the 144 total) came with the fender repeaters as a separate option, another 85 cars came with the light package. Assuming that the Canadian light package includes the L31 fender repeaters, that's 86/144 Canada-sold cars that came equipped with them. Sorry for any confusion...

This one definitely landed at a good home. Congratulations...great colour.

Great score! That is one sweet looking drop top. That is one of my favorite colors too. Looks like you will be having lots of fun.

FQ3 is one pretty color in my eyes as well.

Got the master and booster swapped this afternoon.

Initially we had intended to send the originals out for rebuilding, but that would have left the car un-driveable for at least 5 weeks... So thinking back to the 70 Monaco we parted that was equipped disc brakes, but had the incorrect replacement drum brake booster and master cylinder. I threw them on and bled the system.

No more low speed braking issues as far as I can tell.

Booster replacement on console cars is a dreadful job, but its done and the originals can be sent out now, and the car remains driveable!

Over the winter I refreshed some road wheels considering the ones that came with the car were in very rough shape.

Masking them off is time consuming, but I found a paper plate is perfect to protect the centers while blacking out the outer lip of the rim.

Outside with her new shoes!

That car is beautiful! I love both Q3 and Q5 color cars. Nice score!

71Polara383 said:
Over the winter I refreshed some road wheels considering the ones that came with the car were in very rough shape.

Masking them off is time consuming, but I found a paper plate is perfect to protect the centers while blacking out the outer lip of the rim.

Outside with her new shoes!

Hey Wyatt! Nice job. What color paint did you use for the centers? Is it Argent or. . .?

Ripinator said:
Hey Wyatt! Nice job. What color paint did you use for the centers? Is it Argent or. . .?
Click to expand...

I used this. Looks excellent and holds up pretty well, available pretty much anywhere.

71Polara383 said:
I used this. Looks excellent and holds up pretty well, available pretty much anywhere.

Mighty fine, Wyatt! Thanks a lot.

71Polara383 said:
I used this. Looks excellent and holds up pretty well, available pretty much anywhere.

One more question: The small screws that attach the chrome centers to the wheel are missing on my wheels. Did you hafta find screws for yours? If so what size, etc. are they?

One more question: The small screws that attach the chrome centers to the wheel are missing on my wheels. Did you hafta find screws for yours? If so what size, etc. are they?
Click to expand...

I was not missing any. I don't know the thread size off hand, they are usually ⁵/¹⁶" heads, but I do believe @polara71 had a combination of replacement fasteners he could recommend.

71Polara383 said:
I was not missing any. I don't know the thread size off hand, they are usually ⁵/¹⁶" heads, but I do believe @polara71 had a combination of replacement fasteners he could recommend.

Guess who got new springs today thanks to ESPO Springs 'n Things and the help of @71Polara383? Here are the links explaining my choice of springs -- I had planned on Eaton but ended up going with ESPO.

PS: I think I see some rake that was not there before -- I know at least a couple folks who will be happy