Removed my cluster to fix a few issues. One was that the odometer stopped working soon after I re-installed the speedometer's spinning magnet ~1992. I sent that off to a speedo shop in Bakersfield who re-bushed the shaft. It had been wobbly, letting the spinning magnet grab the aluminum cup, which fortunately only cable broke the cable. This pass, I found the plastic gear driving the odometer has slid axially on the shaft to not contact the driving gear. I just slid it back. I didn't see any retainer to stop that, so maybe just friction should.

The fuel gage failed ~1995. I remember I was testing at the kick-panel connector, substituting resistors for the sender to test the gage and got smoke from the cluster. Perhaps I accidentally jumpered a 12 V pin to the sender pin. The factory Vreg on the cluster rear was now gone, so I must have removed it back then (smoked?, forget). Since then, I have been using an underdash fuel gage. Problem turned out to be a bad float on the sender.

Instead of the factory 5V regulator (thermo-mechanical), I bought a generic one on Amazon ($7). It looks like one I put in my other 1960's Mopars a few years ago ($30 ebay), but a search of "Plymouth voltage limiter" today found nothing, other than the >$50 ones from RTE. In the photo, the black wire (gnd) with male 57 terminal in the factory Vreg slot is redundant since the other black wire going to a case screw is identical. The other wires are to ring terminals on studs, which is more secure.

I found the factory gage appeared kind of OK. No broken wires and read ~60 ohm. But when tested w/ the new Vreg and resistors, the needle started to move then just jiggered a bit. I used 10 ohm for full and 69 ohm for empty. The bi-metal lever w/ nichrome wire looked slightly smoked, so I figured the gage was shot. I had 2 spare fuel gages for my 1964 Valiant, so used one. I took the cover off (drill 2 rivets). At least the needle rotates cw with fuel. The canister's diameter was the same, but a bit thicker. The needle is longer, but I didn't snip it. The 1965 faceplate just crimps over the canister. I didn't need its internal Vreg, so cut off that stud, which is the only way to fit on the sub-cluster PCB which it bolts to (w/o drilling a hole). The spacing between gage studs was slightly wider so I filed the PCB holes to fit. The polarity of the 2 gage studs doesn't matter, since just a resistance heater.

The 1964 gage response was a bit weak, even though it swings about the same arc in its application. I should have bought an adjustable Vreg, as for my other old Mopars. Thought I did, but must have been a similar one on Amazon. In those cars, I goosed up the output to ~7V to work well. I also had to add a parallel resistor to get the zero reading correct. The gages also have mechanical adjustment thru back slots. You turn a flat screwdriver which changes the pivot angle (zero?) and another changes the lever arm (gain?), but those were max'ed out. I suspect only the manufacturer ever tweaked those. I also added a parallel resistor to get the zero reading right (30 ohm I recall). You can't see it in the photos since on the front side of the sub-cluster PCB. But need another "knob" to get the span right (hence, adjustable Vreg best). I mainly care that it reads "empty" correctly. Some of my vehicles only show 3/4 after a fill-up, but a minor concern.

I changed all bulbs to LED type and tested each from the round connector pins. The bulb w/ 9 forward-facing LED's shown gave the most light of several I tested. One advantage of LED's is that they won't heat to possibly melt any plastic (as I found in my 1965 Dart cluster). In theory they should last the life of the car (no promises).

Since thicker, the subcluster presses more against the cluster face, so I couldn't quite get the 2 pieces to totally bottom out at the clamping screws, but looks OK and I sealed the gap to keep dust out. Before storing away the original gage, I played with it a bit more. It is a little tricky where the bi-metal lever attaches to the needle, using a little stirrup. It appeared like the contact point with the stirrup was shifted and by bending the bi-metal lever slightly I put it where it looked like it should sit. Tested again, the needle started moving continuously, so maybe it would work now, but too late to backup. Maybe I will do another pass on this cluster in another 25 years.

The steel black plate behind the speed numbers had a few rust spots, which had bled into the speed numbers in the front plastic. I sanded it bare and repainted. I had to break a few plastic melt tabs to pry it out and reset it w/ a glue gun. I repainted the numbers using white spray paint captured in a yogurt cup and a tiny brush, immediately wiping the surface with ethanol to keep the paint just in the recesses. I also polished the windows w/ plastic polish. 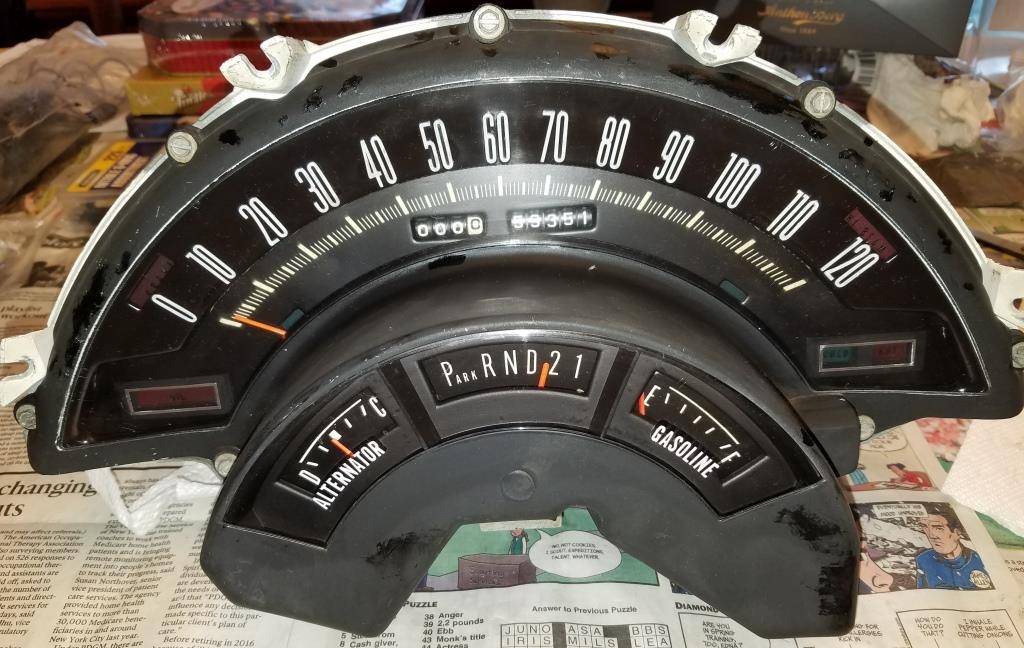 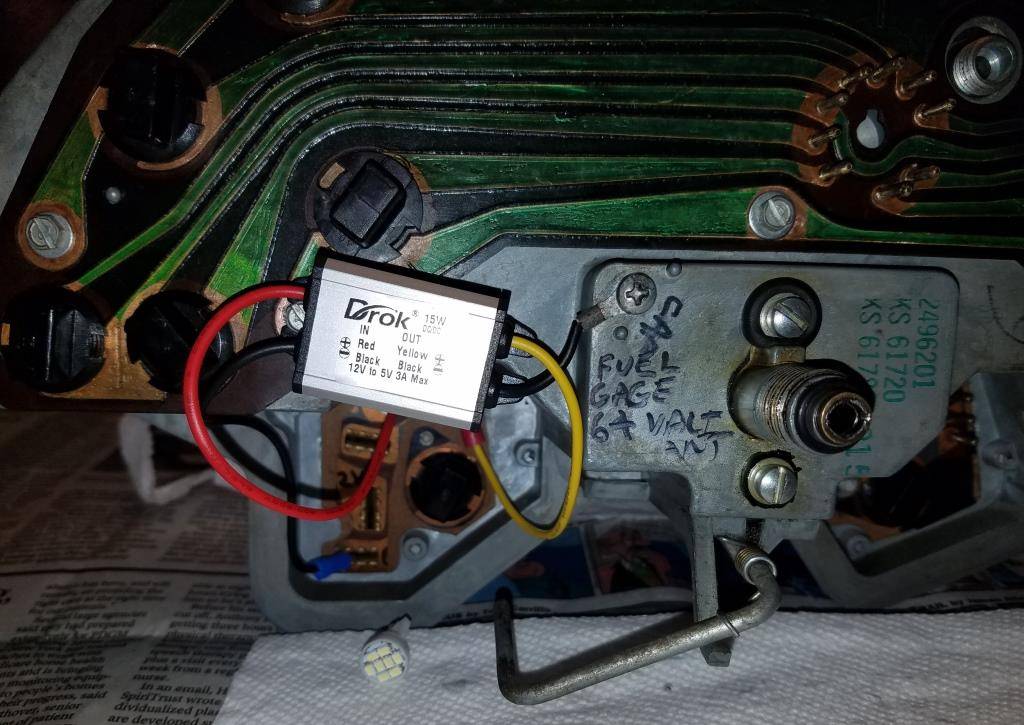 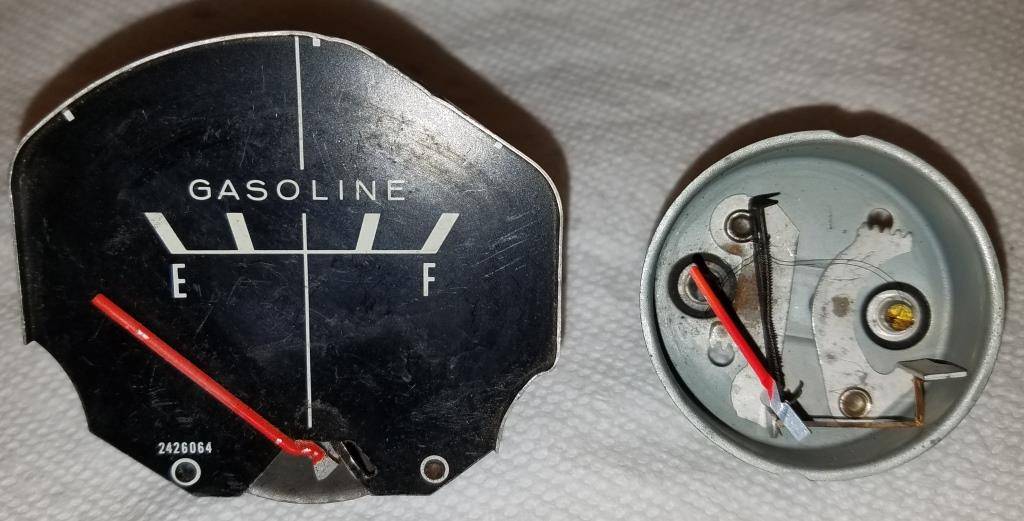 Great work!! Very nicely done!
You must log in or register to reply here.

Need ideas with fuel guage not working when cluster installed

Chasing down multi ill-wiring, 68 Newport - down the rabbit hole