At the time of posting, this FB listing is 11 hours old.

FB Description
'68 Chrysler Town & Country station wagon Have owned since 2002, not pressed to sell but if there's someone more motivated than I these days, I'm interested in hearing from them. *NO TRADES* Was built as a highly optioned 440 car- tilt/telescopic steering column, AM/FM with floor mounted search button, front and rear A/C (there is a rear mounted A/C unit on the ceiling between the 2nd and 3rd rows, power windows, power locks, 6 way power driver's seat, 50/50 split bench with armrests, 9 passenger, etc. What options it doesn't have- the auto headlight dimmer and rear window washer, both of which are problematic. Currently, it has a small block LA 360 in it with a 727 automatic- what I recall is it's a '74 bottom end, with '72 J heads, and a spreadbore cast iron 4bbl intake with a Quadrajet on it. The rear end is an 8 3/4 with a 489 case and a 3.23 open. Couldn't guess the mileage. Previous owner used it as his main form of transportation for him and his family from roughly 1984 until I got it, and I understand he lost track of how many engines/transmissions/axles it had been through. He guessed at that time it might have had over a million miles on the chassis. He had a particular affinity for the LA 360 and had put them in multiple vehicles he owned. In 2007-2008, I completely rebuilt the entire suspension. Upper and lower control arms were removed, bushings pressed out. sandblasted, lower control arms were boxed, new bushings installed everywhere there was a bushing, new tie rods, new balljoints (the lowers were some specially made ones that had more surface area and were like $120 each at the time, I believe they were Rare Parts products, IDK if they're even around anymore), rear springs were bought new from John R spring, torsion bars were upgraded to 1.01 (if I recall correctly) thickness torsion bars from a later '70s New Yorker, new Monroe shock absorbers all around, even tracked down the absurdly difficult to find (at the time at least) metal sleeved rubber bushings for the upper shock mount that pressed into the subframe because I didn't care for the two piece ones that came with new shocks. I don't remember everything that was rebuilt/replaced anymore. The drums were removed all around and replaced with disc brakes, using '73 C-body front spindles, and a Scarebird rear disc brake conversion on the rear axle, which used 80s Lincoln continental rear rotors and '79-'85 GM rear disc calipers (Eldorado/Riviera/Toronado/FWD Seville ones). Extra long ARP studs were pressed in because, at the time, they were the only longer studs I could find and I needed *slightly* longer ones for the disc swap. I could not get the rear discs to work properly. They didn't seem to want to work with the '73 disc proportioning valve I had installed, found out these particular calipers had to be manually ratcheted out/adjusted to make the pads contact the rotors, I lost the place I was working on it at, I had too many other projects, and it got tossed on the back burner. I've slowly dispersed other projects but haven't had the real time to get back to this. It is rusty. You can see that. What you'll be pleasantly surprised by is that the rust doesn't extend an awful lot further than what is immediately visible. The floors, rear frame rails, subframe, and rockers are all solid. It ran to be parked where it is, was driven 8 miles to this spot with only front brakes, but I've not made any attempt to start it in 3 years since it was moved. I had managed to keep it indoors most of my ownership of it, but not for a couple of years now. I'm not interested in trades, I'm more interested in capable people who want to fix it. If you're serious, talk to me. Comes with a mountain of spare parts- there is at least one spare piece of every single glass panel on the car, I have a full set of replacement factory side trim (the diamondplate was on the car when I got it, as was the paint job), both the bondo filled sideskirts AND a rust free set of sideskirts with factory trim, an extra instrument cluster, taillights, a bunch of random NOS bits, I have a factory radio with faceplate *somewhere* for the car (it may take a moment to find but it will go to whomever buys the car if it sells), etc. I have a full set of the front wheels (they're aftermarket but made by the same company that made the OEM '69-whenever C-body road wheels- they're the same wheel with the wrong center caps and trim rings) and the rear police 15x7s. I'd prefer to keep the police wheels if I sell the car, but I'm not against letting them go with it either. 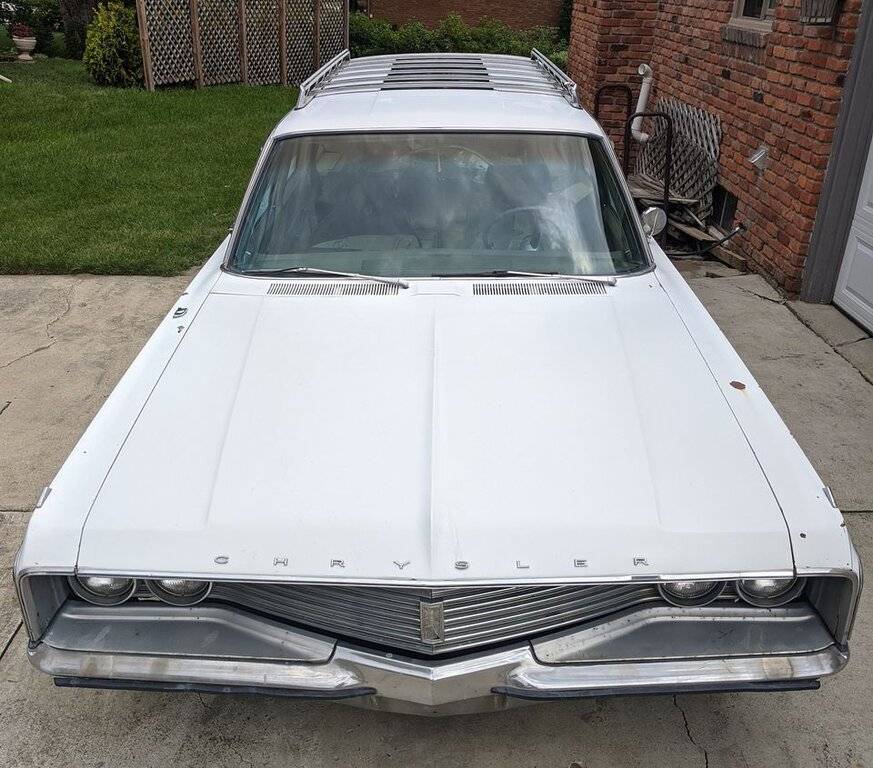 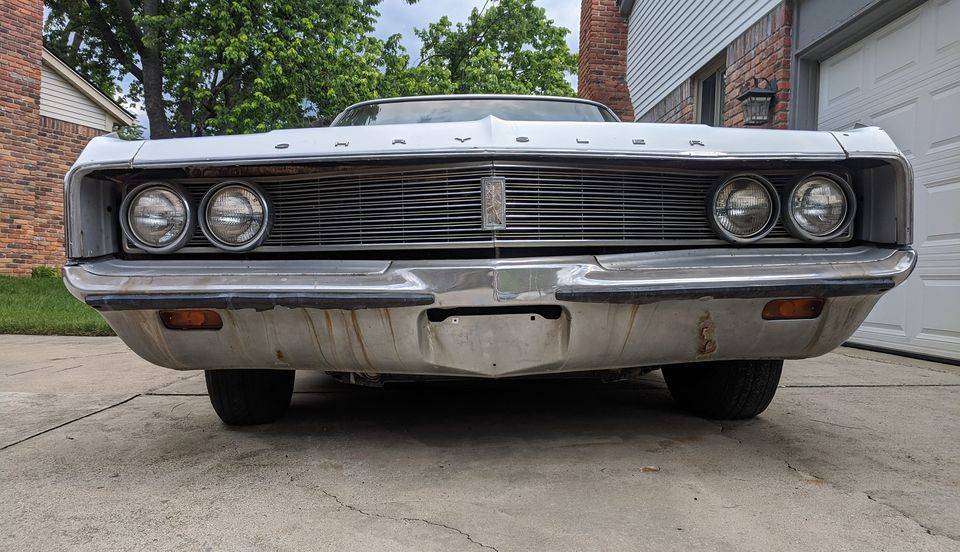 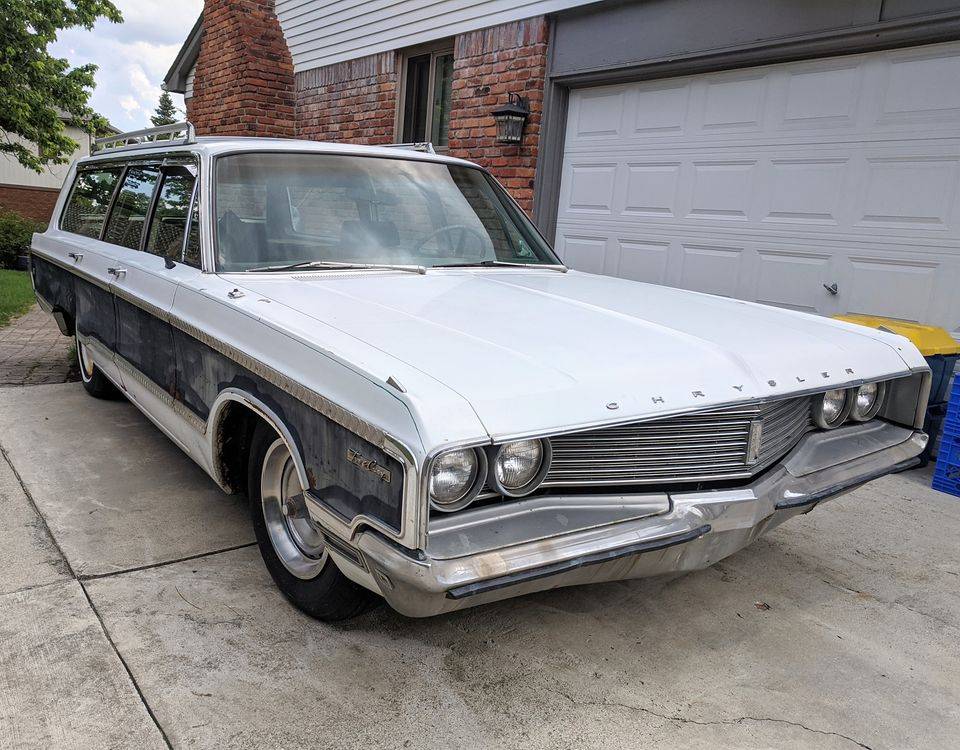 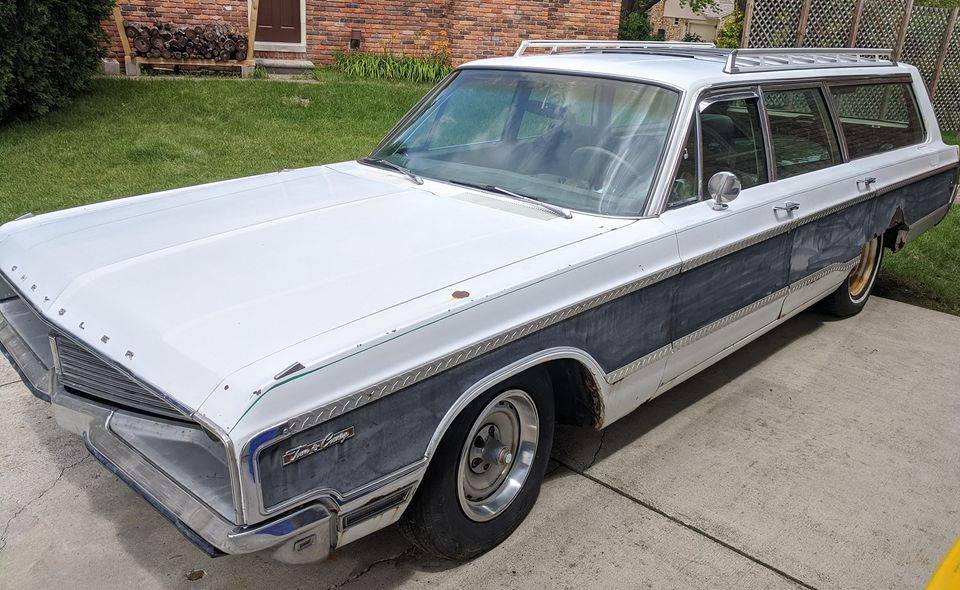 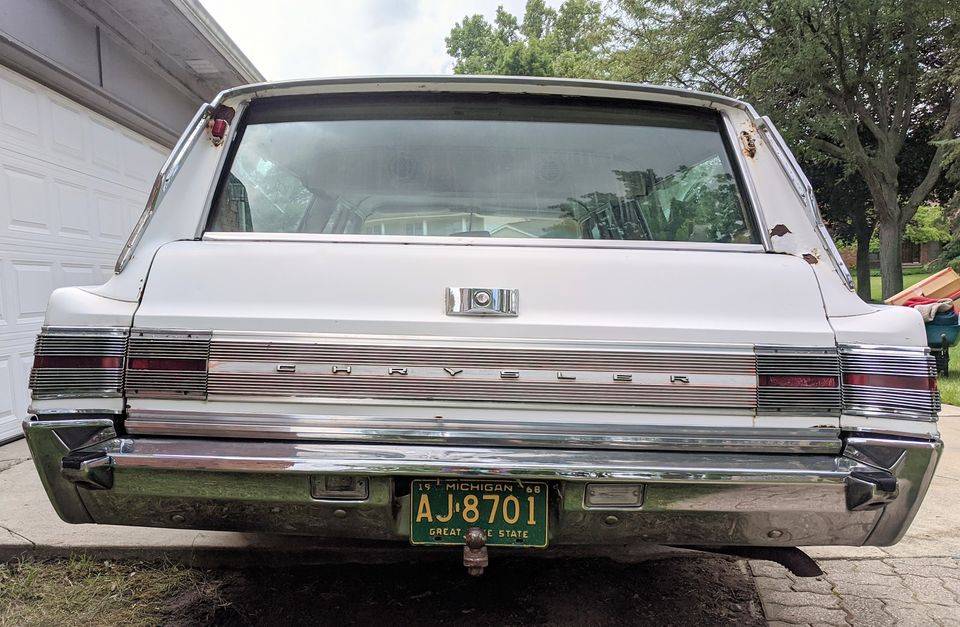 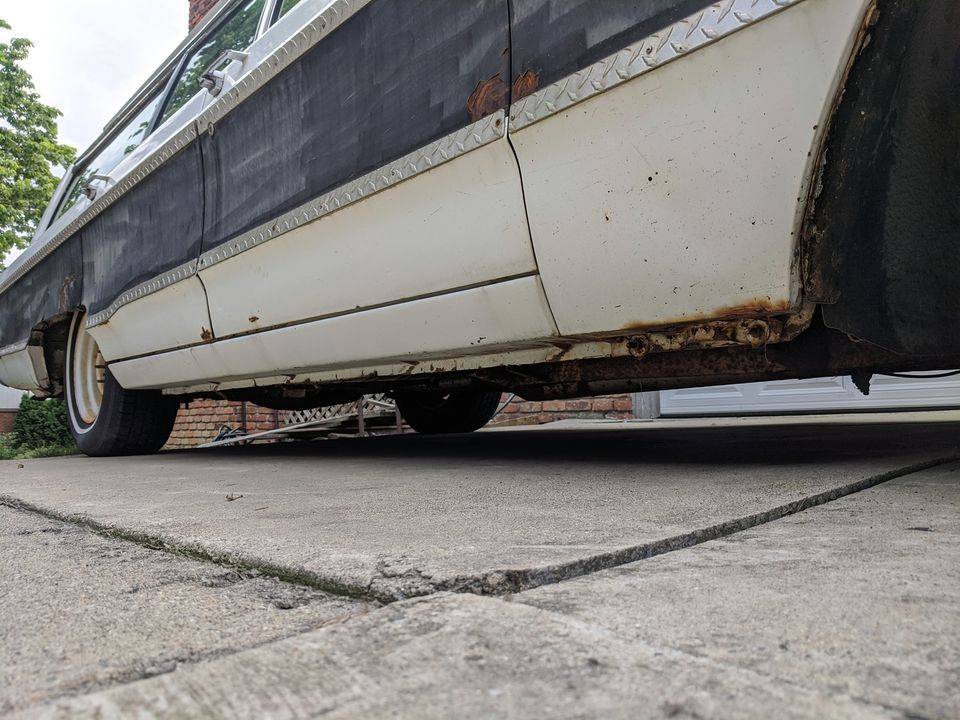 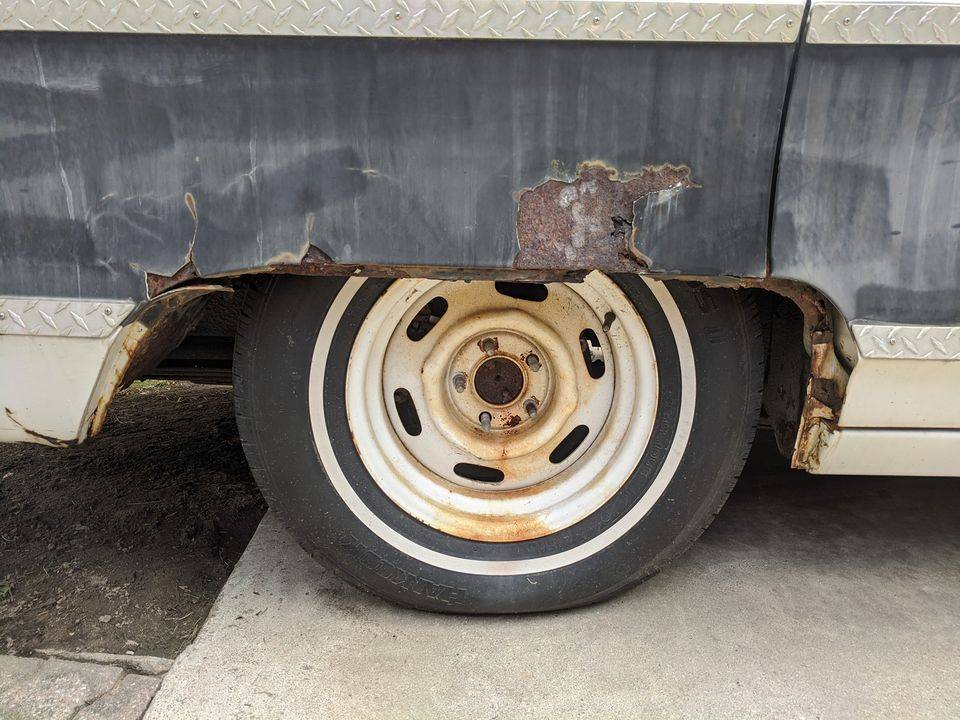 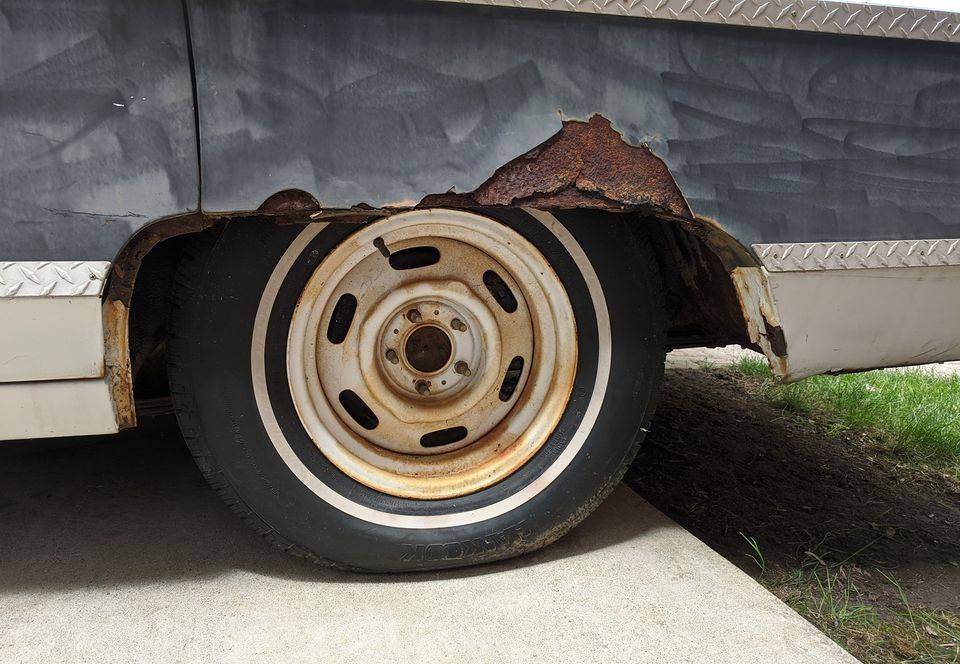 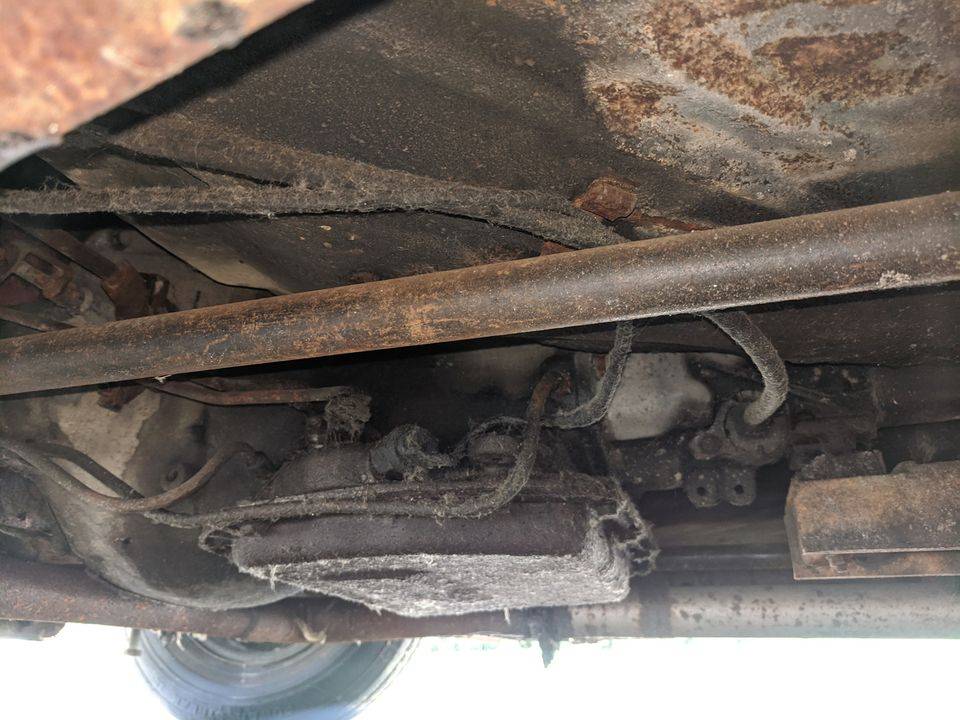 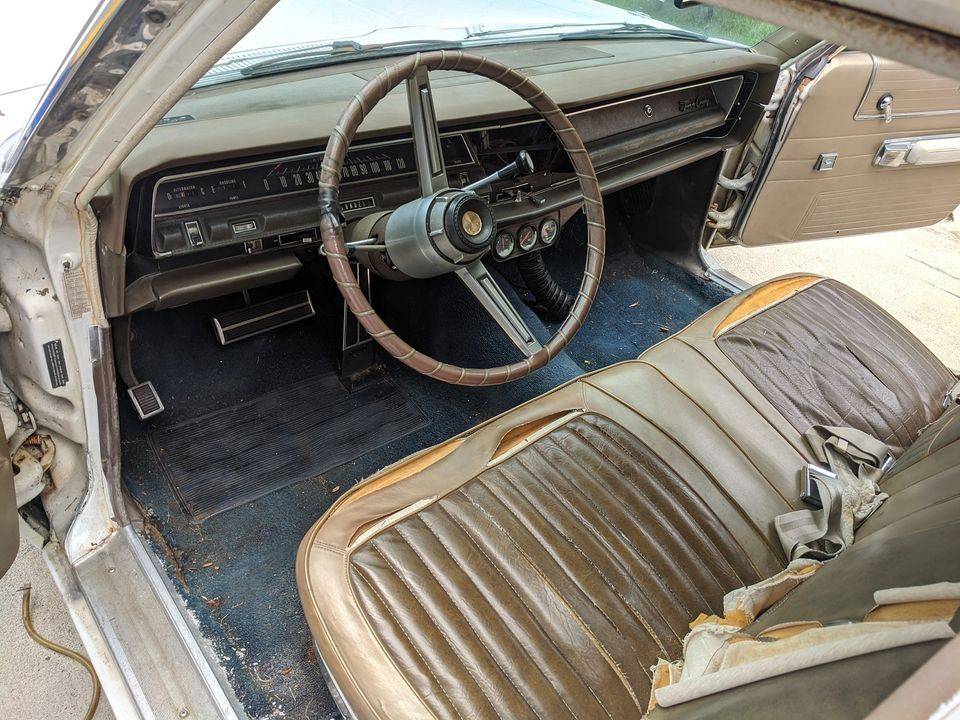 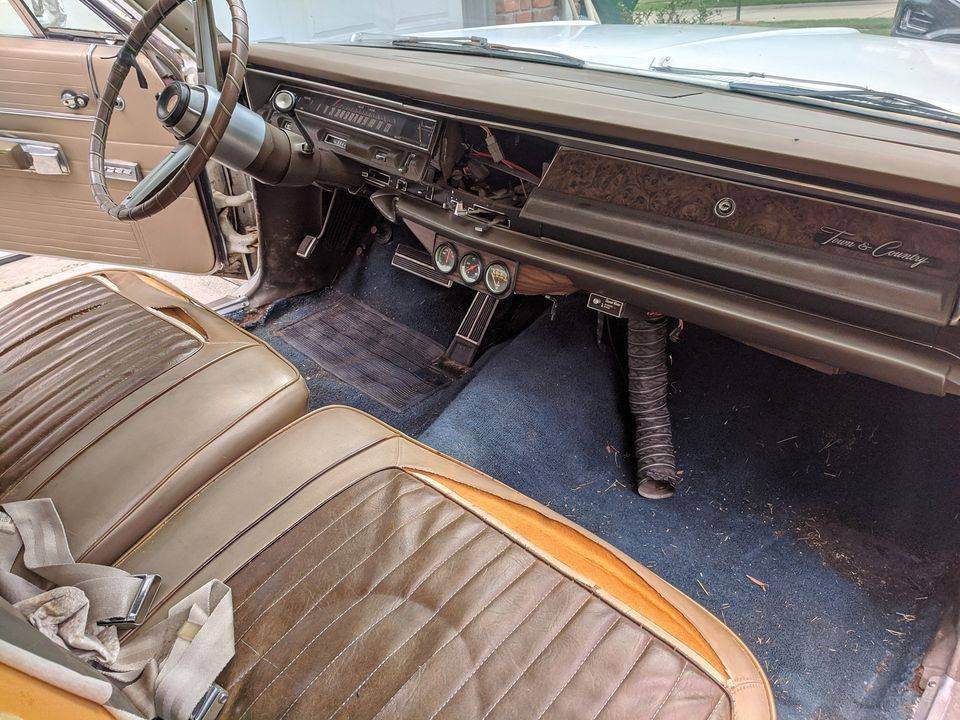 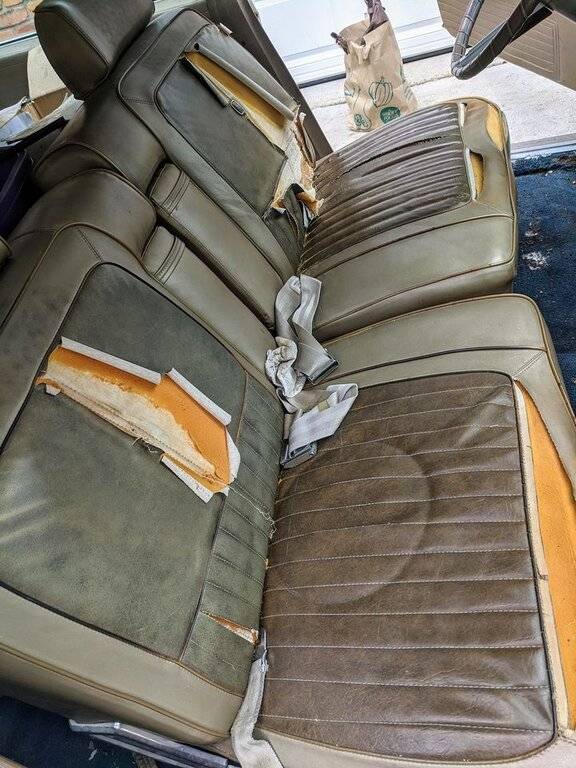 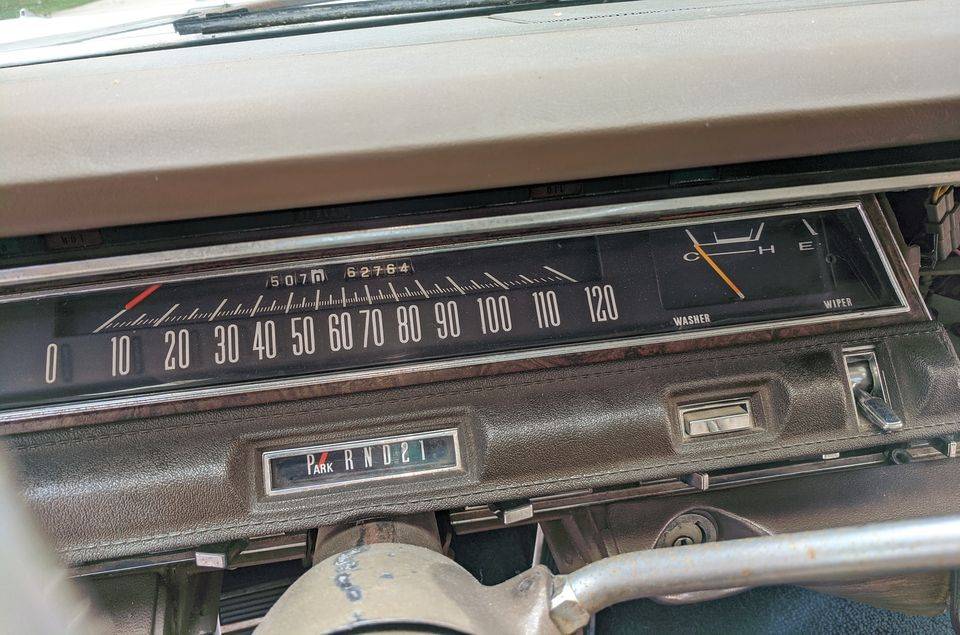 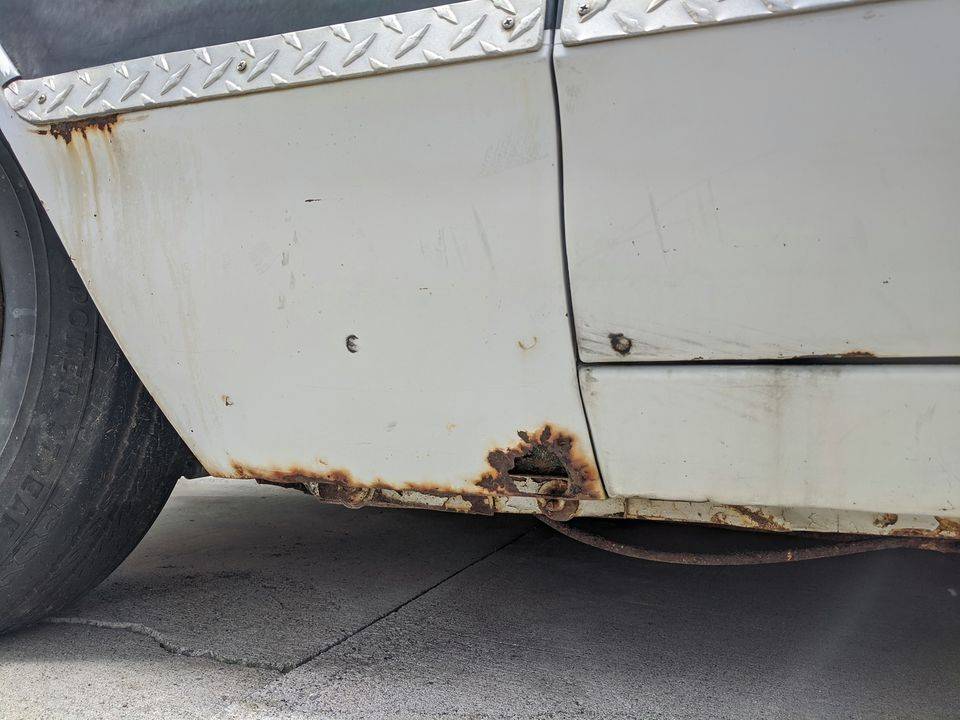 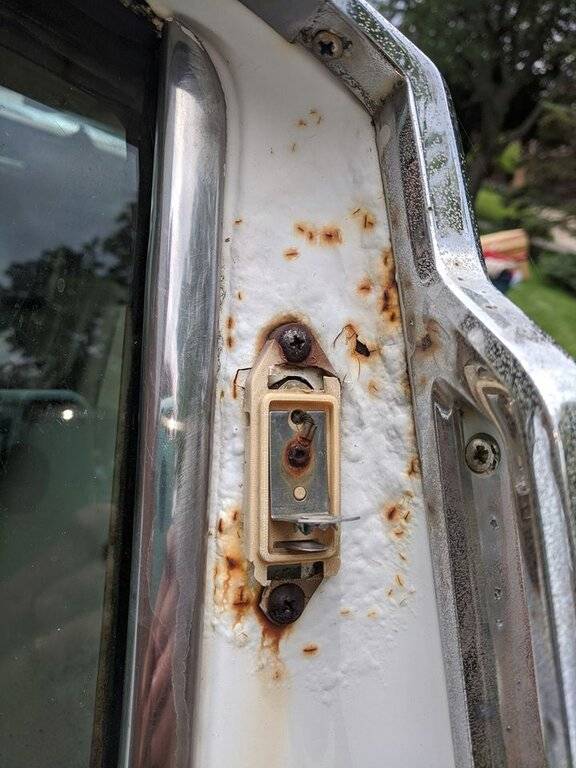 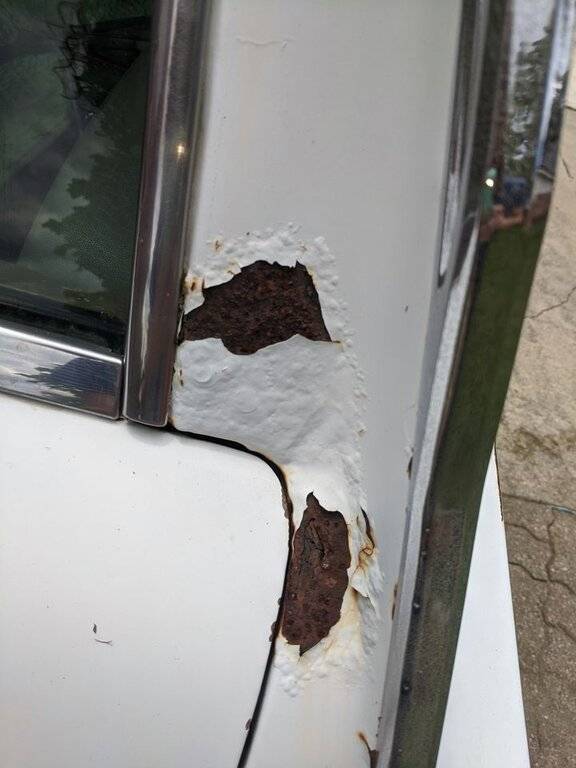 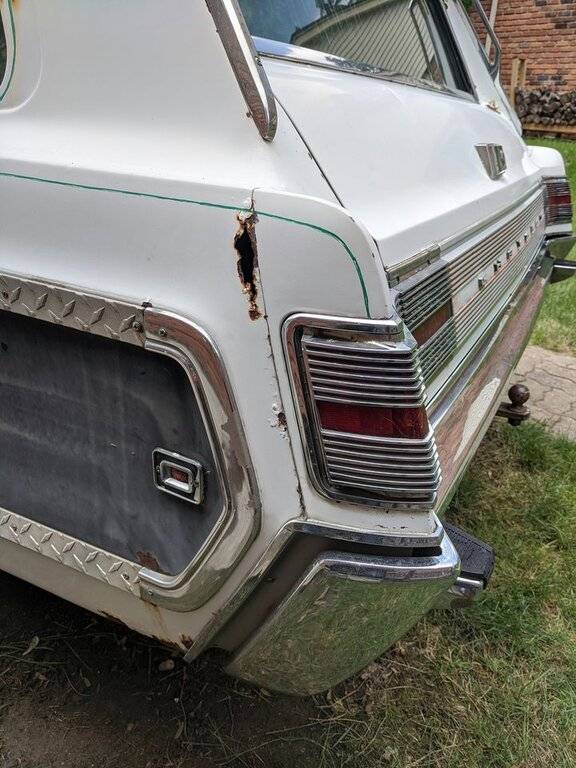 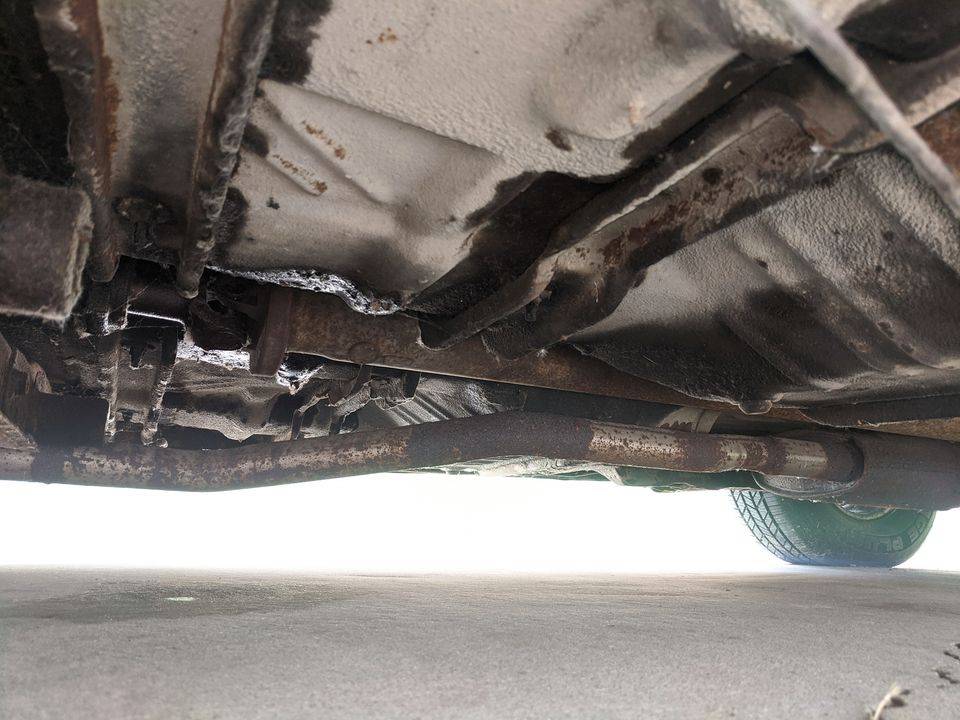 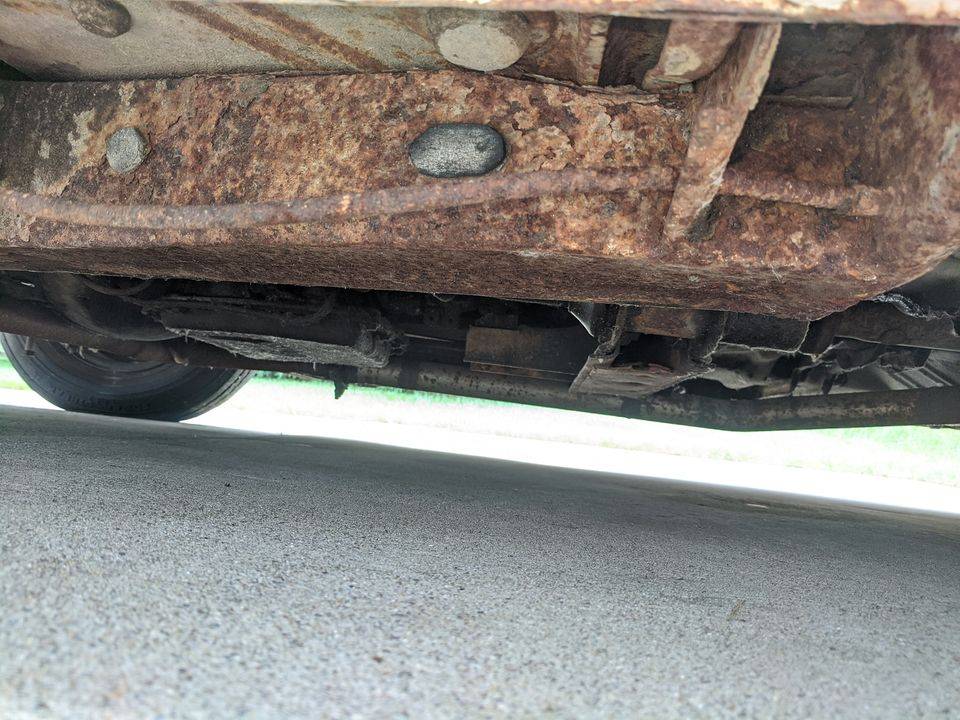 Somebody got creative with the diamond plate.

I probably drive by this neighborhood twice a day.

FB Description
Will need towed. This is a Project vehicle. Has been off the road for 22 years? Has been lowered. Title is in my name. Needs carburetor work or replaced. Engine does run but it may need work. Brakes need work. Still has Disc/Drum MC and will need a MC for 4 wheel disc brakes. Front brakes barely work. Converted to 4 wheel discs. 360 cubic inch V8 in it now Automatic 727 I believe. PS. P windows but only drivers side works. Tilt. PB. P Rear Window. P seat. Had AC but removed. Has rear AC unit. Old Bias Ply tires. Will need tires. I have 2 extra rear doors. Currently drives side rear door will not stay shut. Does not have original trim. Home made aluminum diamond plate? I have extra glass. I will not respond to"Is this still available". 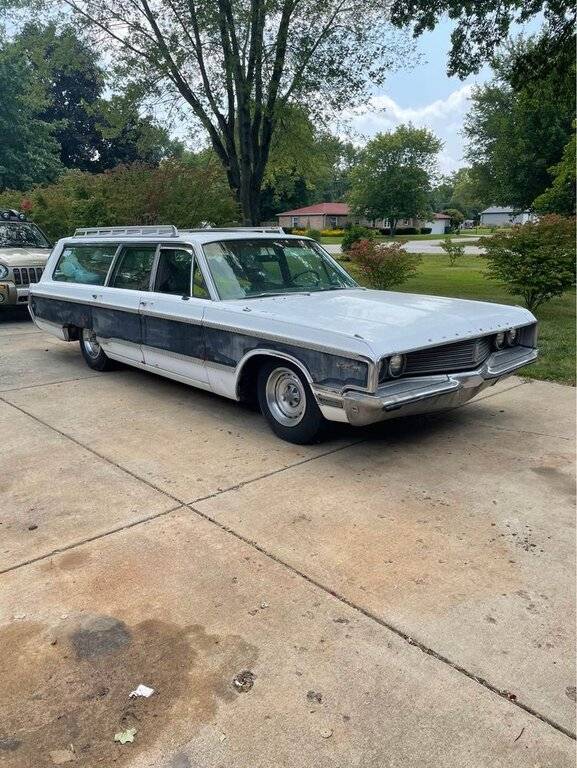 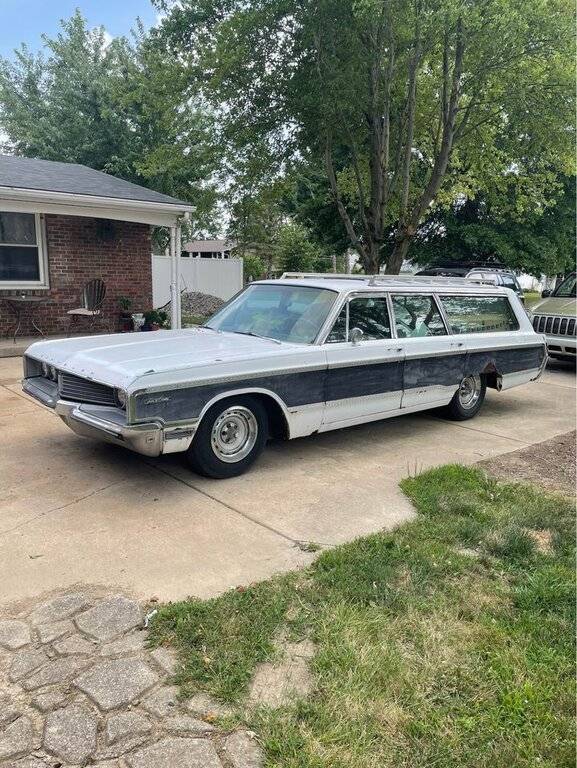 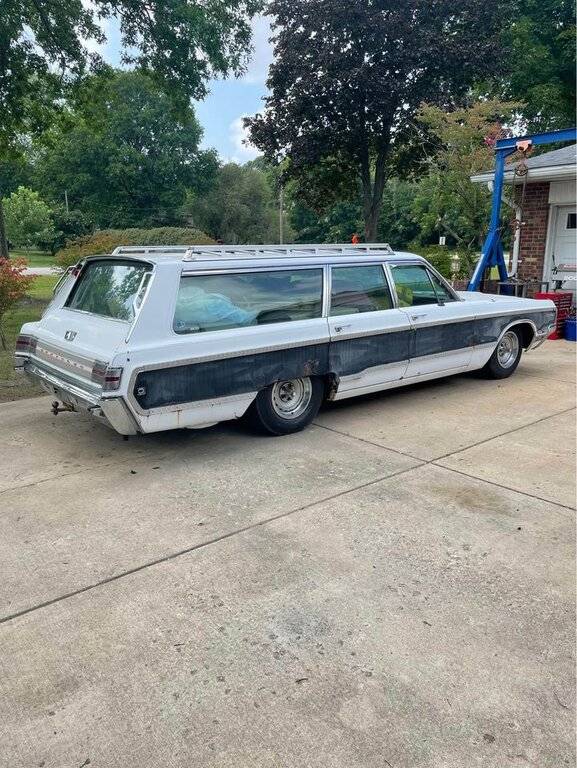 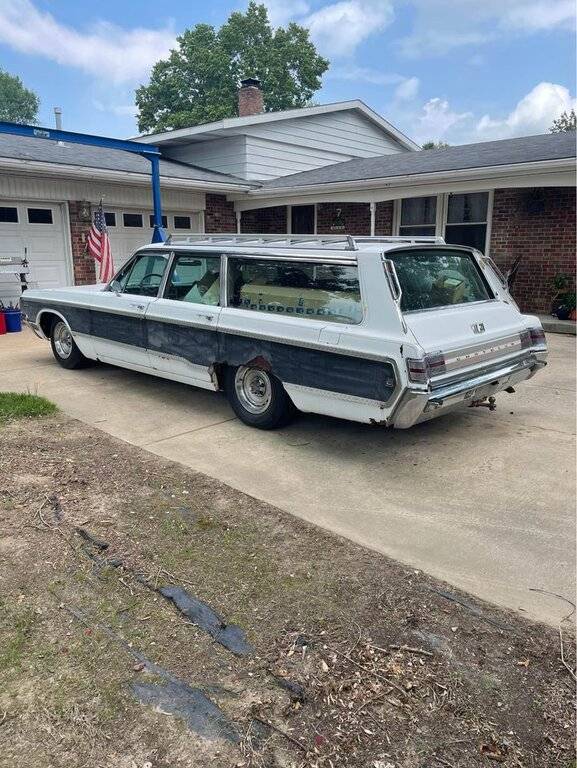 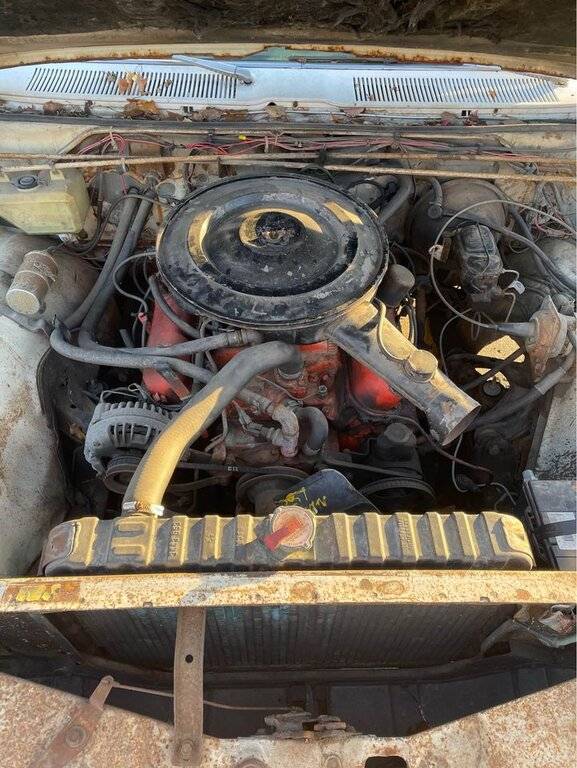 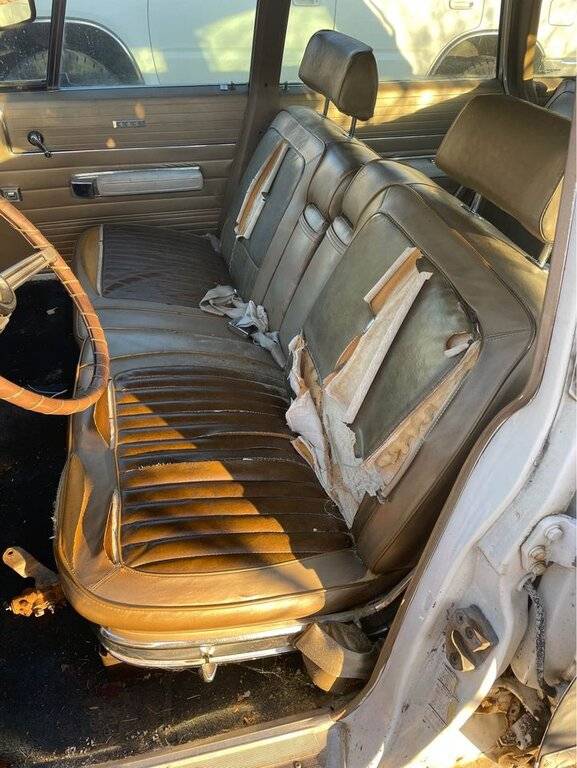 What's the deal...lately there has been a number of fools popping up asking crazy numbers for non-op vehicles. This would be top dollar even if it was driver status and 100% mechanically sound.

Whoever bought this to flip it is an effing moron.

I love wagons and often try to find reasons to save them, but this one...yikes.

I'm wierd enough to drive it and have fun. People would enjoy still smile and get a kick outta it. But the darn thing needs work in every area before that would even be possible, seller is way off base.
You must log in or register to reply here.

NOT MINE 1966 Chrysler Town and Country Three Row - ? - Weatherly, Pennsylvania