My recent purchase 69 Chrysler 300 has a bunch of things that need "unfixed". I haven't fooled with this yet, but it looks like the choke is wide open when engine off/cold. Are the secondaries mechanical or vacuum? They don't open at all when looking down the throat.

Is there a .pdf with installation adjustment procedures?
Thx 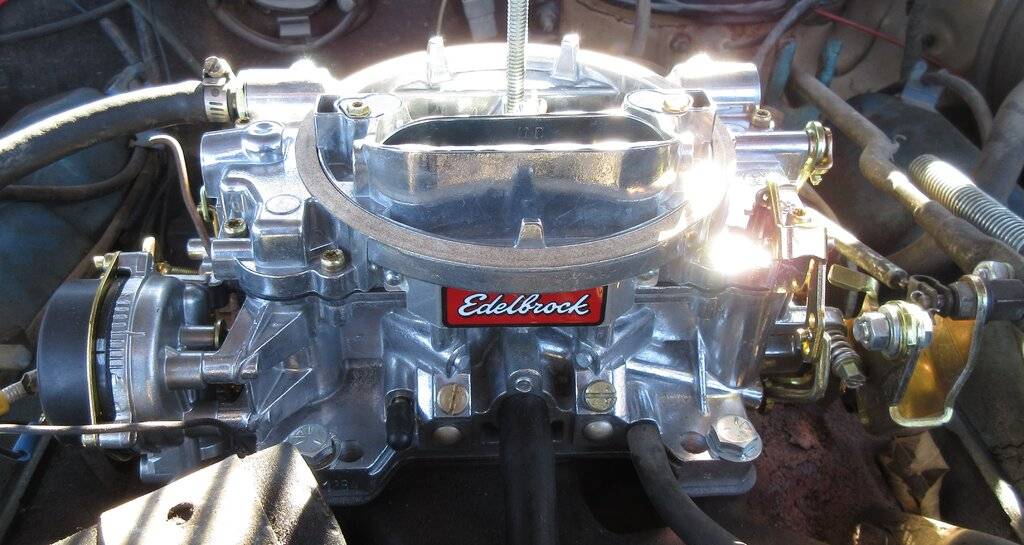 Is this carb good or junk for a 350hp/440? Will it be good with a rebuilt engine with bigger cam and possibly better intake manifold?
I prefer the look of the original type carbs or is modern technology better to use?
H

There will be a thousand varying opinions on that Edelbrock 600 cfm carburetor. It is neither good nor junk, it is good and junk. It will work for your present application if installed and adjusted correctly. I've used plenty of those Edelbrock carburetors up to dual 800 cfm ones on a 528 ci Hemi.

It will still work with a bigger cam and intake manifold. Will it be optimal? Probably not.

Ten different carburetors will also work. You already own this one so it is cost free. Why not use it.

yours is a 600 cfm, small for a 440 but will work just won't pull after 4500 rpms like a 750 cfm would. look to see if the primaries are wide open. secondaries should open as long as the choke is all the way open. also they might be hitting on the intake manifold loosen the carb bolts and then try again.

That carb is basically the Edelbrock version an AFB. It should work fine. The choke is easily adjusted. Go to their website and look at the instructions for installation. With modifications you will most likely need a bigger carb depending on what you do to the 440.
C

In reality, the carb is about the same cfm as the factory carb (Carter 4bbl or Holley 4160). Jetting should be similar, too, I believe. Just that it has their universal/Chevy linkage hookups, which will work on a Chrysler application with the appropriate adapters (which should alread be there).

With "more cam" and such the 600cfm can still work decently well, but a 750 might ultimately be better. BUT until then, you could do worse than figure out what you perceive is wrong with the one you have. It'll do fine up to the 4500 or so rpm level, then flatten out a bit. BUT that's also where the factory TFs tended to upshift at WOT on the non-HP 4bbls, IIRC.

Just some thoughts,
CBODY67
You must log in or register to reply here.

M
Dry Carb after sitting for a week.
2 3