78Brougham said:
Now you know that's not true Steve! I'm very proud to own a California NYB! And while we may have a different political point of view, I still respect you and your opinions..... no matter how wrong they are.

Oh and by the way, you're right, mine runs great!
Click to expand...

I know it does Kenny - it was my groups' calibration completely. I had responsibility for all the 1978 and 1979 318-4 and 360-4 bbl calibrations in those years for California. California in 1977 recalled all the 318-2 bbl CA cars - CARB couldn't run an official quality audit emission test because of multiple pass outs during warm up even at 76 degrees F (those calibrations were done by the proving grounds as usual - and they were all crap from 1973 and up in California, and federal cars too, but the federal ones weren't quite as bad). CARB also said those cars were a driving hazard, and that is what I had been saying to managment as well. I was stationed in CA to remedy any problems that came up, and I had been complaining a lot about the junk being developed for CA - the proving ground actually told me when I complained that "they didn't care - CA was the land of fruits and nuts" - I kid you not! I had also been talking to the chief engineer about where this was headed and when the recall hit, it cost Chrysler a lot of money and bad press, so he let me take over the CA calibrations for 1978 and up for the 318 and 360. But due to designated responsbilities, I could not touch the 2 bbl calibrations. So I convinced him to let me do them as TQ calibrations instead then for California only. As a result, there were no 318 or 360-2 bbl cars sold in CA in those years.

I had already been working on major improvements based on what I was seeing GM doing, because they knew how to utilize the catalytic converters that they helped develop that were used almost nationwide starting in 1975. Chrysler proving grounds still had no clue how to use them 2 years after introduction. So I worked with Carter with their TQs to develop fuel flow curves that were richer off idle and cruise and during hard acceleration and also used less exhaust gas recirculation and retarded timing to meet emission standards than Chrysler's lean burn junk based on what I saw GM doing. Richer mixtures actually reduced combustion temperatures in those areas of operation than lean ones that increased nitrogen oxides, thereby allowing less use of EGR and retarded timing. I had a test car built up by the two guys who worked for me in Detroit and they just slipped it into the chief engineer's drive home pool car fleet without his knowledge to let him drive it and evaluate it overnight. The next morning when he came into the office, he wanted to know what was in that car - it drove flawlessly - better than the federal cars. When he found out it had been done by my group and actually passed emission tests with plenty of margin, I got the assignment to develop all the 4bbl calibrations, and that was all that was allowed in CA cars in 1978 and 1979 and the same TQ carburetor calibrations were used on the federal 4 bbls as well. But the 2 bbls federally didn't run as well. The only thing I didn't get from the chief engineer (his name was Dick Goodwillie) was a unique 318-4 bbl manifold for cost/volume reasons, so the 318 had to use the 360-4 intake manifold. The reality was that the intake runners were a little too big for the best velocities of fuel/air charge into the cylinders for a 318, so torque developed for that configuration wasn't optimal, but at least it was more than adequate and smooth without driveability issues. The 360-4 was optimal in every way though. Enjoy Kenny.

78Brougham said:
I know the feeling.... it was hard to sell Old Red, but I left her in great hands! Nice score Graham, I'm sure she's a keeper.

Dammit Kenny!! If she’d only had a Sunroof, she’d be mine..
R

Damn that looks good after a nice bath! I love that cloth seat material....they used that in the '74 Imperials only!

Robert Saigh said:
love that cloth seat material....they used that in the '74 Imperials only!
Click to expand...

This? That was also no Xtra cost option in my first 76 NYB. 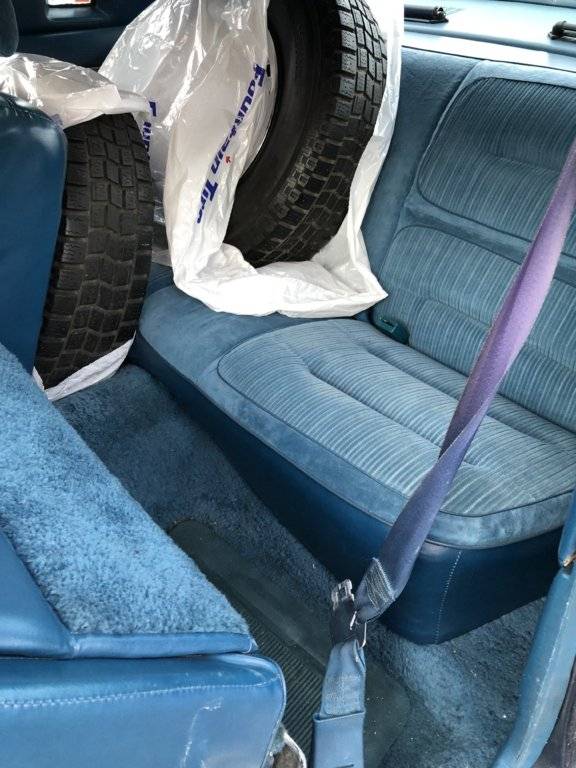 73 T&C said:
I believe the dodge horn pads had no emblem if I recall correctly. Great find of a car. The interior is especially nice. Really like the seat design too. Congrats Graham!

Can’t wait to see it brought back.
Click to expand...

Looks like you're right: I just went to http://www.hamtramck-historical.com/images/dealerships/DealershipDataBook/1976/76-Monaco_0007.jpg and it shows that steering wheel type as "blank."

Good thing that whoever slapped that Chrysler emblem on there didn't drive the car right afterwards. He was obviously drunk!

Mid70's Chrysler Fanatic said:
Looks like you're right: I just went to http://www.hamtramck-historical.com/images/dealerships/DealershipDataBook/1976/76-Monaco_0007.jpg and it shows that steering wheel type as "blank."

Good thing that whoever slapped that Chrysler emblem on there didn't drive the car right afterwards. He was obviously drunk!
Click to expand...

I was lucky to get a blue leather wrapped steering wheel out of a 1977 Daytona Charger that a tree fell on and smashed the passenger side A-pillar. With a little lathe work on the rear hub and it fit perfect on my 1978 NYB. The point that is important is the horn pad had a Dodge emblem. Of course I switched it out to a Chrysler emblem. I have no idea what I did with the Dodge emblem.

Thanks to Stan @commando1 for locating the part # for the horn pad and thanks to @marty mopar who had the part in stock! Hopefully it won’t be long till the drunken horn pad is just a memory! @marko has the hood ornament and the ATC II control head so I am all set ........for now. More to come so stay tuned

commando1 said:
This? That was also no Xtra cost option in my first 76 NYB.

That's not the same ribbed velour used on the 74 Imperials. 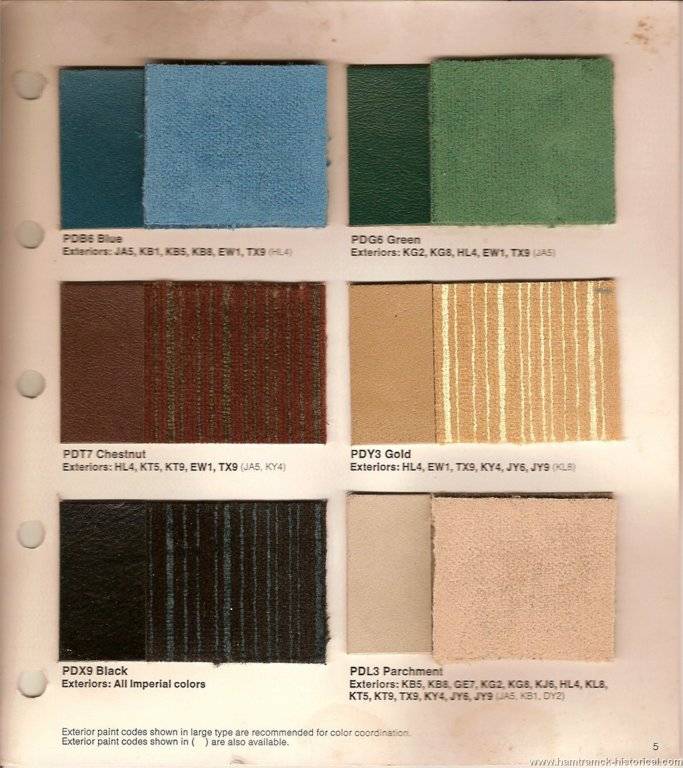 A lot of great NOS parts at

Graham, you have a very nice Diplomat!

Yes Bob it is a very nice RMB Diplomat. It has the 400 and 8.25 Non Sure-grip which I confirmed on Saturday as i tried to get out of the back lot covered in snow/ice lol.

Marty has supplied me with many parts over the last couple of years at Arizona Parts. He has the Blue horn pad I need. Just need time to go through it and sgtart making my list. Stupid job ....

Dobalovr said:
Yes Bob it is a very nice RMB Diplomat. It has the 400 and 8.25 Non Sure-grip which I confirmed on Saturday as i tried to get out of the back lot covered in snow/ice lol.

Marty has supplied me with many parts over the last couple of years at Arizona Parts. He has the Blue horn pad I need. Just need time to go through it and sgtart making my list. Stupid job ....
Click to expand...

.
Any idea how many were produced?

Marty has his own unique personality, and he is the best vendor out there in terms of price and lots of parts needed for our particular cars. He always comes through for me. The only other one that I rate up in his category is Deception Pass Motor Parts. They probably have more of the stuff we need than anyone else, except AMS Obsolete (who are really expensive) and Deception Pass prices are reasonable, but not as reasonable as Marty's.
Last edited: Jan 29, 2019

Mine or the Monaco's Mr C?

.
Any idea how many were produced?
Click to expand...

No idea Bob but this is only the second one I have seen up here. @marko is parting one out so that makes 2...

Dobalovr said:
No idea Bob but this is only the second one I have seen up here. @marko is parting one out so that makes 2...
Click to expand...

.
Was it a one year only option?

I've only seen another one a few years ago and it was very low mileage. I hesitated for a minute and someone swooped in and got it before I could pull the trigger.
R

This seat material looks very similar to the '74 Imperial....No mater I like it. And the material wears like iron, very durable!

That looks like the red 75 Royal Monaco Brougham that I parted out due to Ohio rust. It had the 440/727, which is going into one of my other Mopars, and where I got the tilt/telescope steering wheel I recently posted for sale. Nice car, but too far gone to restore due to salt, salt, and more winter salt..... Should be a nice ride. Good color

commando1 said:
Mine or the Monaco's Mr C?
Click to expand...

The Monaco...yes it's ribbed velour, but not the same stuff as in 74. Very likely the same as the 77 NYB, but I can't say on that account.

Regarding RMB Diplomats, I had a chance to get a starlight blue example (except it was a white top) but walked because it was too far gone with body rot. Only one I've ever seen in person. It was really hard to walk away from even though it was rusty, because it was such a beautiful car despite it all.

Dobalovr said:
No idea Bob but this is only the second one I have seen up here. @marko is parting one out so that makes 2...
Click to expand...

heres 2 more rough ones besides mine here on Vancouver Island.
neither are running or complete anymore.
the blue one doesnt have alot of options, the black one has the optional upgrade interior like graham's. you can see the plain horn pad.
the dippy package was optional in 76 & 77.
i used to know roughly how many were made but can't find the info at the moment.
i think it was under 1,000 maybe under 800 for both years ? 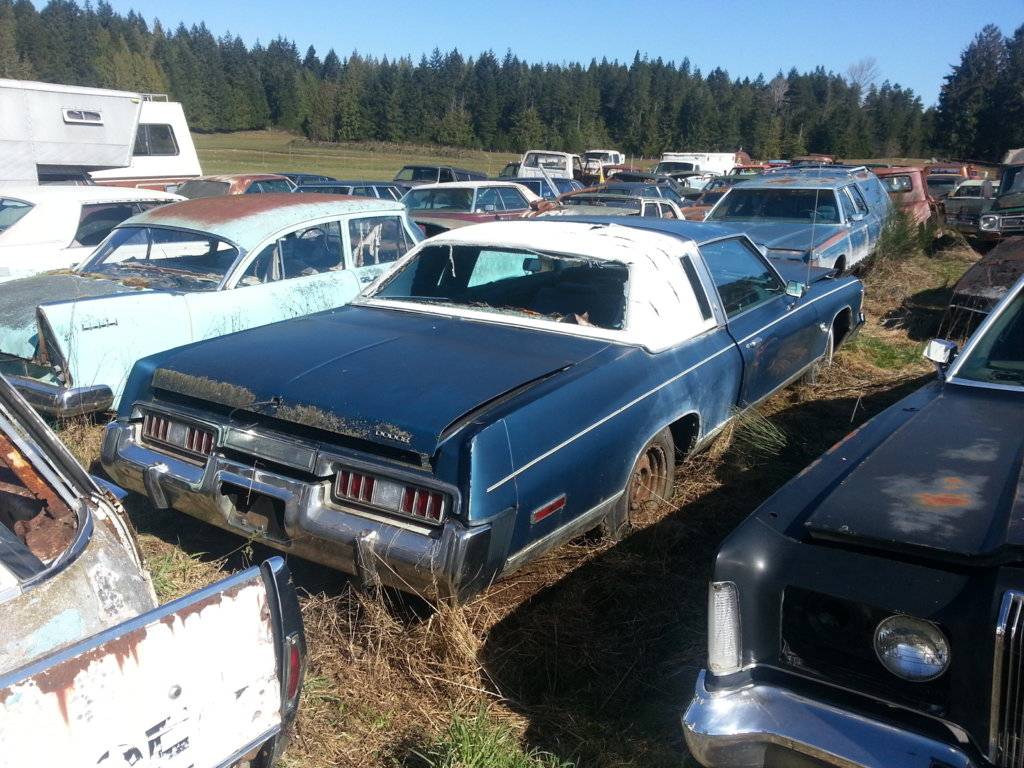 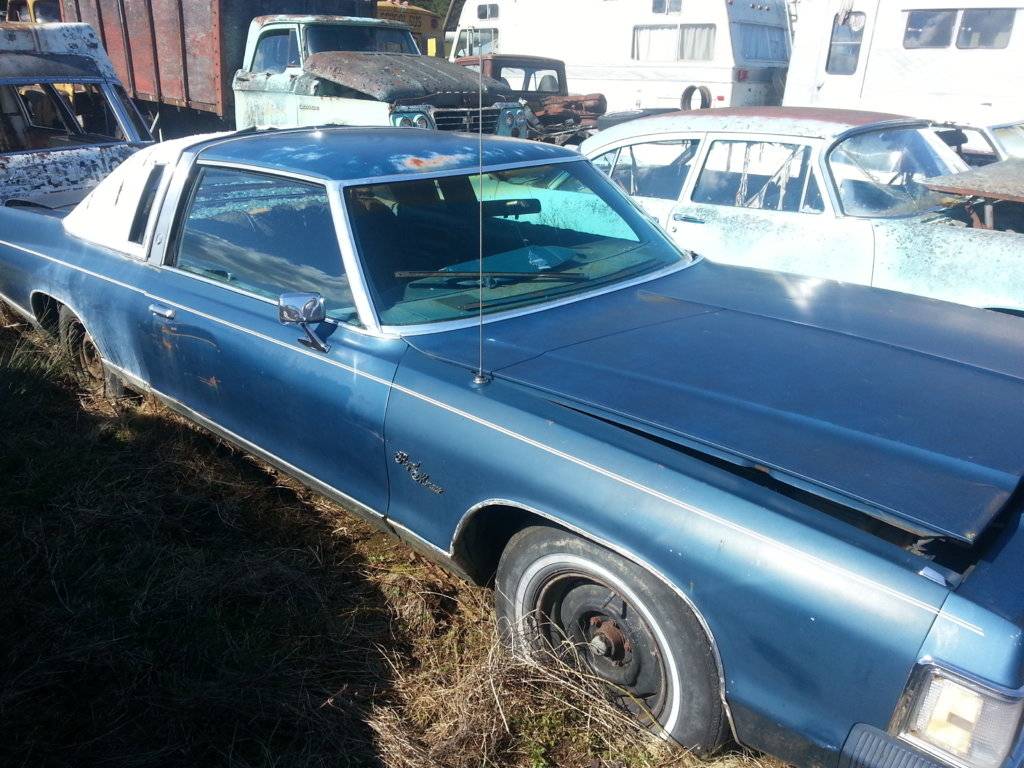 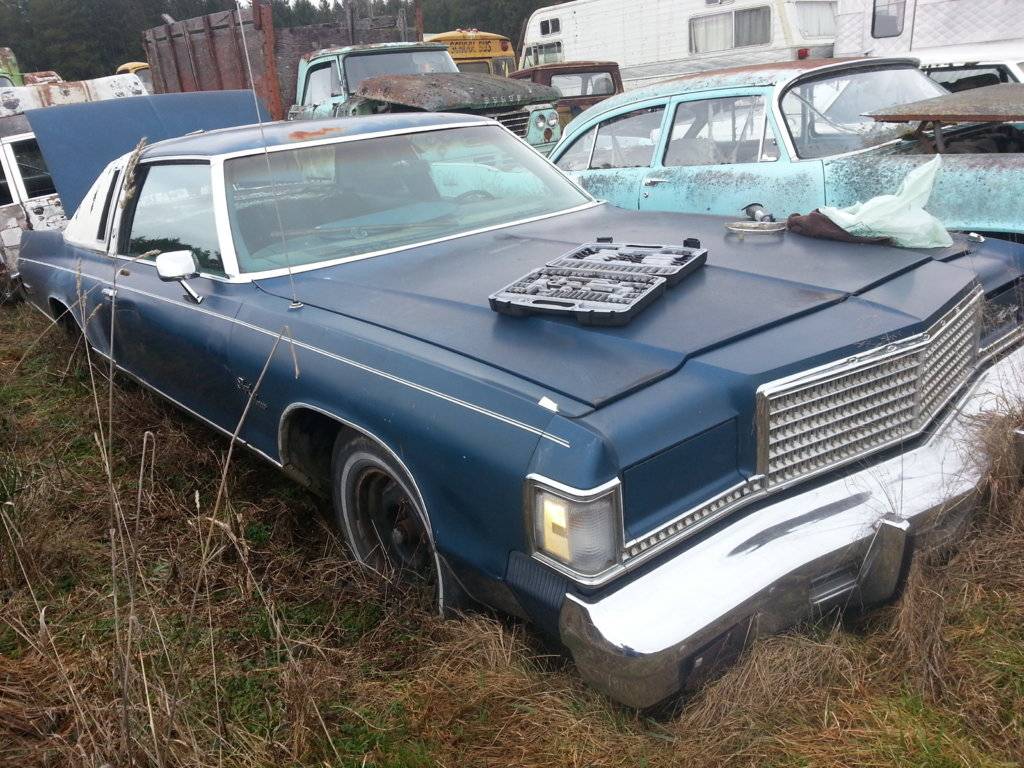 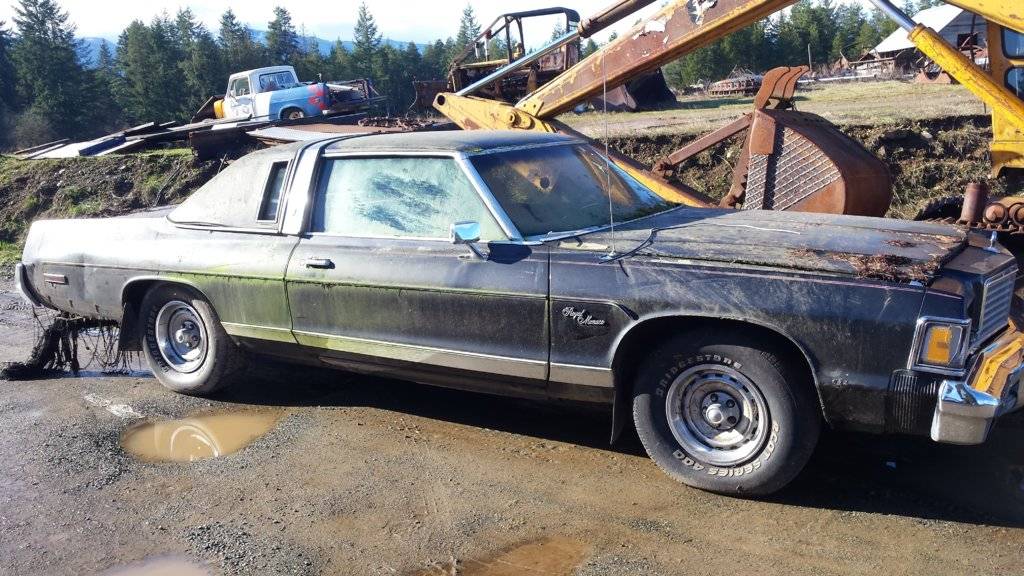 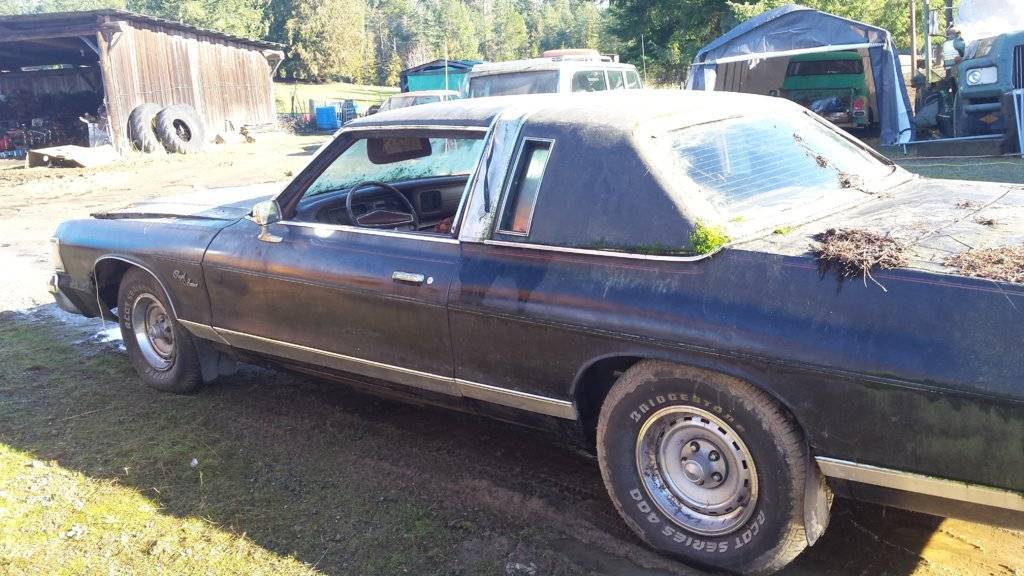 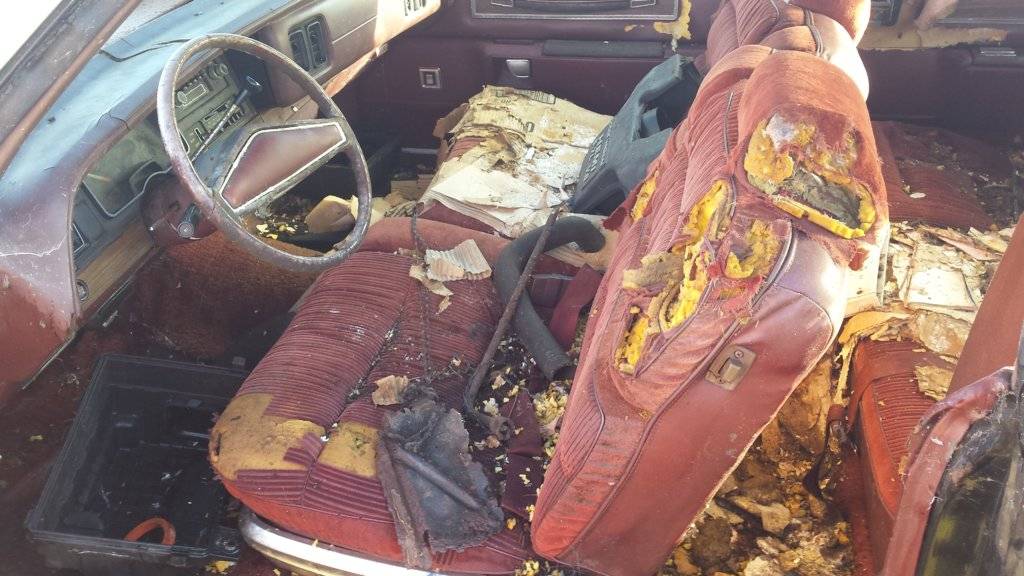