A guide to your Speed Control Servo

Okay, maybe a more fitting title would be 'A guide to my Speed Control Servo' but I'm sure a lot of you have the same one as me. It's the later style unit with one vacuum connection and three electrical connections.
I've been meaning to do a thread on it for a while now and I finally got around to it. I'm sure a lot of you have seen the Chrysler Master Tech about the speed control, it has been around the forum several times, but here it is once more:

A key line of that video is at the beginning; "Although this servo is serviced only as a complete assmbly [...]". But I'm a fixer, I like to take things apart, understand how they're supposed to work, and then try to put it back together. So I did. I've completely disassembled it and I've pretty much figured out how it works. I'm planning on documenting putting it back together here so it can maybe be of any help to you guys if you want to try fixing your own. Or at least be able to diagnose it.

Starting point is a completely empty housing and I'll end up with the complete unit so disassembly will pretty much be the reverse order of the thread. 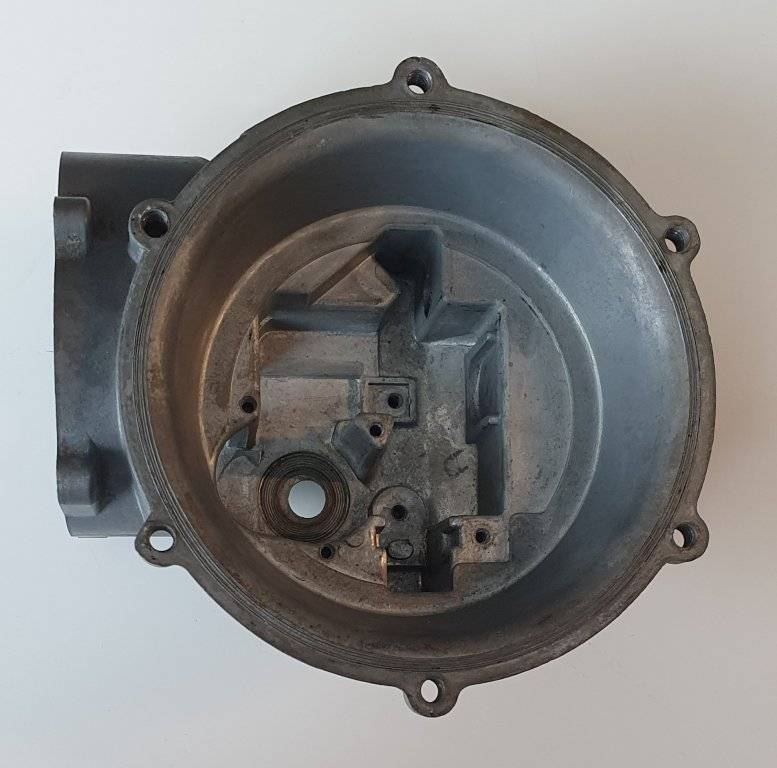 First thing in is what they call the 'Locking Coil' in the vid. It slides in from the side and is fixed with a small bolt for which you need a 3/16" socket. Be sure to check the coil with your multimeter, mine read around 105 ohms. Red wire is positive, beige wire is the negative side.

This next step is extremely fiddly but the pics will tell all you need to do.

This is how you'll have to maneuver the above assembly into place, otherwise you won't get it past the locking coil.

Holding coil, as long as you get a good reading here and with the other coil your servo is electrically fine and should be fixable.

This a fantastic right up so far. Thanks.

In the housing where the holding coil is fitted there is a little plastic reducer ring and a, larger, o-ring. I don't know the significance of the smaller one but the larger one is what provides the seal for your holding coil. Make sure the large one is supple so the unit can get vacuum.

The holding coil is partly held in place by the copper assembly so you want to lift that up slightly or you won't have enough room to fit the coil.

With the coil in place you can secure the copper with another small bolt, 3/16" socket. Make sure you thread the beige wire of the locking coil through the remaining opening between the housing and the holding coil.

Tough part, the core that goes through the locking coil is held in place by a tiny clip on both sides.

Orientation of c clip, afterwards you can slide the spring in between.

When it's in place, make sure it moves freely.

Now you can flip the unit on its side, where you mount the electrical contacts

With those you go from the left to the right:

Edit: I see that I've forgot to mention the additional copper contact here, so there's three parts. The middle one has a "snap contact" as this is the grounding "lockout" switch. The governer pushes the tab in the middle and above ~30mph the switch snaps up and contacts the blue wire thus gounding the blue wire to the housing.
Last edited: Yesterday at 8:32 AM

Borrowed this pic from @Welder guy who was kind enough to provide the measurement of 21.30mm (0.839 in). This pin is not supposed to come out and I'll have to wait and se if this will work for me, but I'm betting it will. 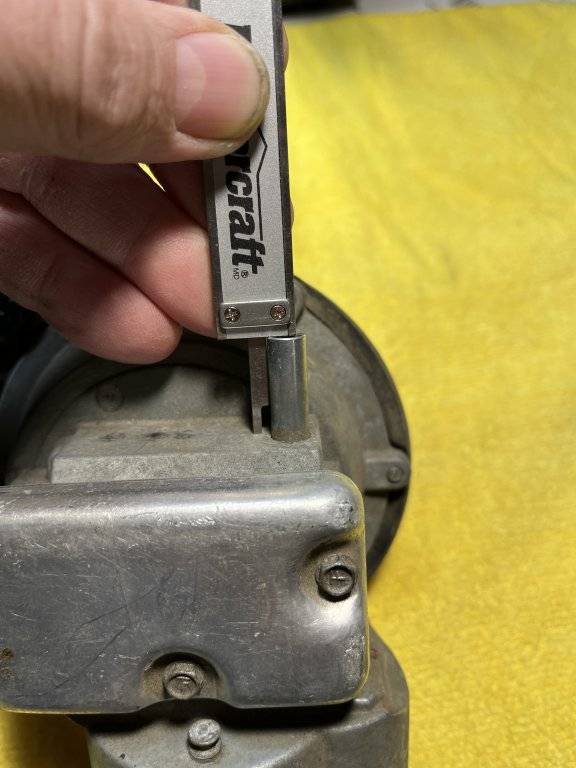 You can then mount the intermediate plate on the inside with the three remaining tiny bolts, again 3/16" socket size, making sure you attach the beige wire as this is the ground wire for the entire unit. In the centre of it you attach the big spring, I'm not sure the orientation matters that much but make sure when you compress both there is no interference between the centre spring and the stalk with the plastic cap. In the remaining opening on the top you can see the modulating vacuum control valve. Make sure it can move freely and can reach the vacuum inlet on the right side.

Very interesting. I've been wondering if I'll install cruise control on my '67 Monaco. Not sure if I have all the parts. I'll be following this guide if I ever get around to it. 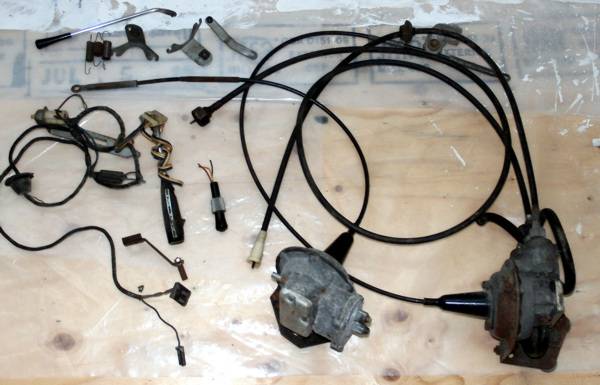 You probably won't have it disassembled this far, but the side chamber is also part of the vacuum chamber of the unit. So for it to seal properly there are a couple o-rings around the shafts of the gears. Better make sure those are supple and sealing. Then it's some copper washers and the gears on top. Pics are pretty self explanatory I think.

On the outside, the larger gear is held in place with a c-clip and some washers.

Thoroughly check your vacuum diaphragm. This is mine and it had several rips and tears. Don't laugh but I fixed it with some bicycle tire repair kit and some light coating of rtv on some places. It holds vacuum so I'm calling it a win. Would be better to get another diaphragm, maybe one day.

I put a light bead of rtv around the side cover and around the main cover and presto chango, there's your serviced speed control servo.

Some extra diagnosis points. Like I said, this unit has three electrical connections: 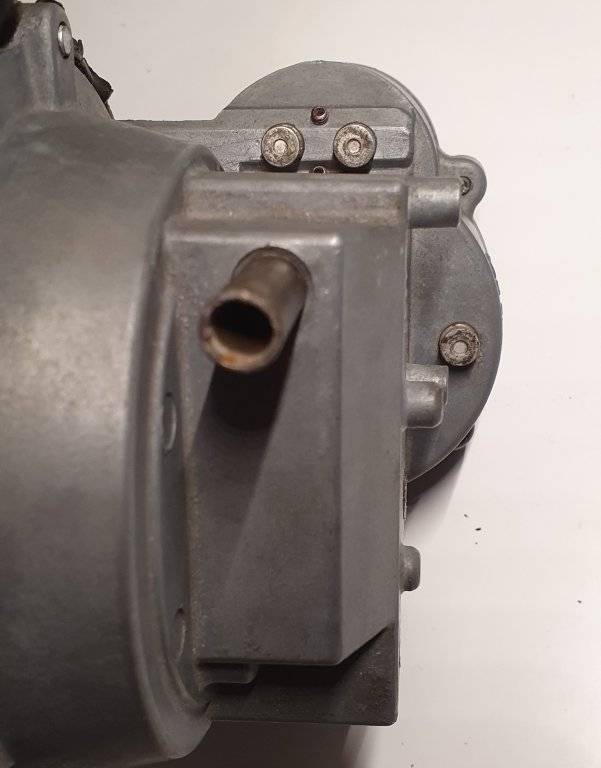 From left to right these are 1) set speed signal, 2) main power feed, and 3) brake pedal signal. With the speed control in "on" both 2 and 3 wires should be hot. Connection 1 is only hot with either the set button or resume button pressed.

If you're having trouble with your brake switch, here's a thread I did about that a while back:

One that was driving me crazy was an intermittent fault, ended up being broken wires at the base of the turn signal stalk which I only found after I cut the wires and removed the tape

In case you're wondering, here's what the inside of the speed control switch looks like

Can someone ID this cruise-control stalk ? I'm showing it next to a turn signal arm from a '67 Monaco, they have an identical mounting tab or flange, but the angle is quite a bit different. There is (was) a paper tag still on the stalk wiring with a couple of numbers: 3730759 94013A

Also shown is another cruise control switch - I've no idea what its from. 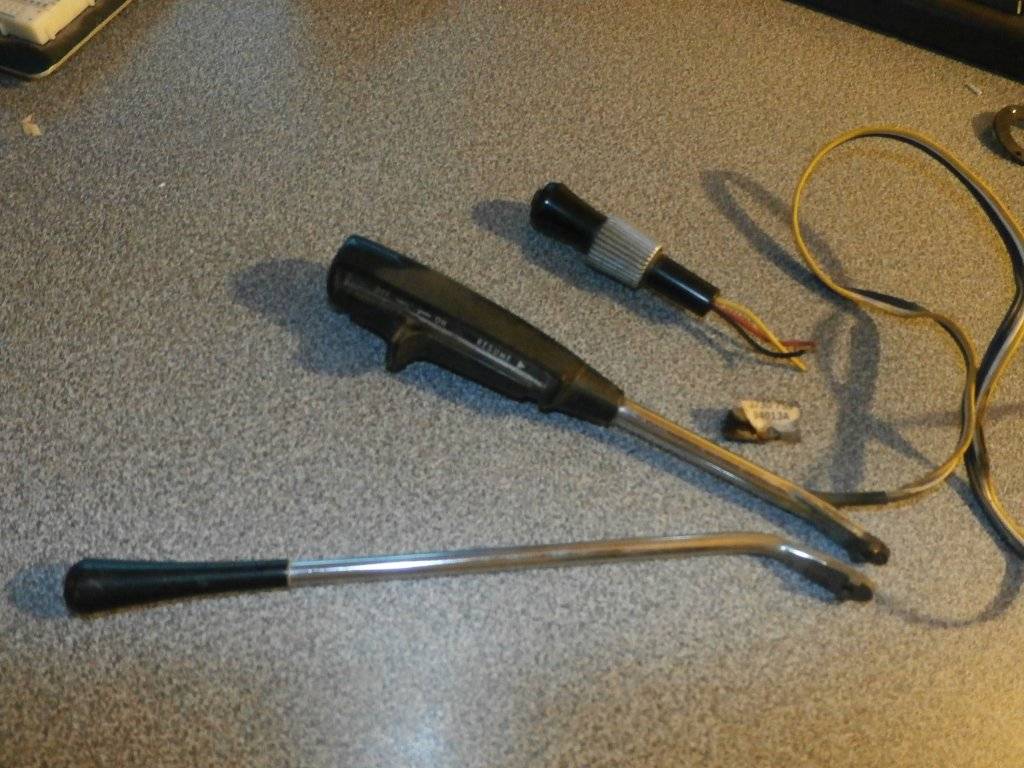 Regarding the cruise control servo units - do they have part numbers on them? All I can see on mine are a couple of "Patent Numbers".
C

Thanks for the great tutorial!

The "reason" they only serviced the complete servo as a unit was that this is better from the dealership side of things. Easier to get the customer "on the road", with a parts and service warranty from Chrysler, than for a (perhaps "learning") tech to unsuccessfully repair the servo. Additionally, if they had a bunch of them with warranty claims, Chrysler could request them back for diagnosis and possible reimbursement from their vendor for the servos. If the dealership tech repaired them, Chrysler would see none of these issues themselves.

NOT they could not be repaired, just that Chrysler did not want anybody to make a customer mad by not doing a good job of the repair, even if the dealership was trying to save the customer money. BTAIM

The GM cruise servos could be rebuilt, too. Allegedly all it took was to disassemble, clean, lube, put them back together, and check the lock-in function.

Thanks, again, for taking the time to put this thread together!

Back when the 55mph National Speed Limit was put in place in the middle 1970s in the U.S.A., adding cruise controls was a big business in the wide-open spaces of western Texas. The Dana-Perfect Circle group sold kits which looked very much like, and operated like, factory Chrysler systems. I went to an installation shop in Lubbock, TX to investigate getting one put on my '66 Newport back then. Then went to the local Chrysler dealer (Fenner Tubbs) and talked to one of their techs who had put the 1974-style Chrysler factory cruise add-on kit on a lot of Chrysler products. I also looked very closely at the OEM production units on new Chryslers at the local dealer, too.

What I determined was that the 1974 system would be an exact fit for the '66 Newport, after (as the dealership tech noted), making the slot in the steering column for the turn signal lever about twice as wide (to clear the wiring coming out of the cruise lever). Past that, the only other issue might be how the speedometer cable attached to the back of the speedometer head (snap-on or screw-on). The underhood/underbody spatial relationships between the 1966 and 1974 would be very close to identical, best I could tell.

Never got past the investigation stage, though.

ARA had some aftermarket cruise kits which looked almost exactly like the Chrysler systems, too.

Bluetooth Addition - What would you want.

Cry for help! Anyone from the Central Coast, CA??
2