detmatt said:
Very sorry to hear this Gerald. Time for some more lemonade!
Click to expand...

It's coming! Mathilda's 383 was running very well up to the moment that evil C--T pulled her jumped-up Datsun out in front of me! The crash just stopped the motor from turning, but did no damage to the engine. I'm GLAD it stopped it. Radiator got busted. I drained her crankcase early on, having JUST changed the oil in Tilly for the Fall the day before! I used that for the FIRST oil change on Gertrude, BTW. I'll order a fresh 5 quart bottle of Lucas for her tonight.

It helps to pray every morning Jeff. Really does help. Amen, Plan B got formulated before I ever bought the car actually. The OTHER C body available in southern Arizona was the '66 300 some crack head wanted $5k for. No motor at all in it. I drove by, saw that the SOB had been chipping parts off it and selling them piecemeal for little rocks, and wasn't happy w the prospect. At least the Texas EX-truck driver flipped something with a motor and extra parts. I'm now pretty sure there's an ugly CRACK lurking down in the block, probably in the back passenger side where all the crap was. By cleaning it out, I exacerbated the problem. Monday afternoon going home was a symphony of GUNSHOT LOUD BACKFIRING, and I hoped against sense it was just residual crap, and that a good oil change would put it right. FAR from the case....

Ah, on to Plan B. Tonight, I at least got enough space cleared from the wreck to pull that motor and tranny. 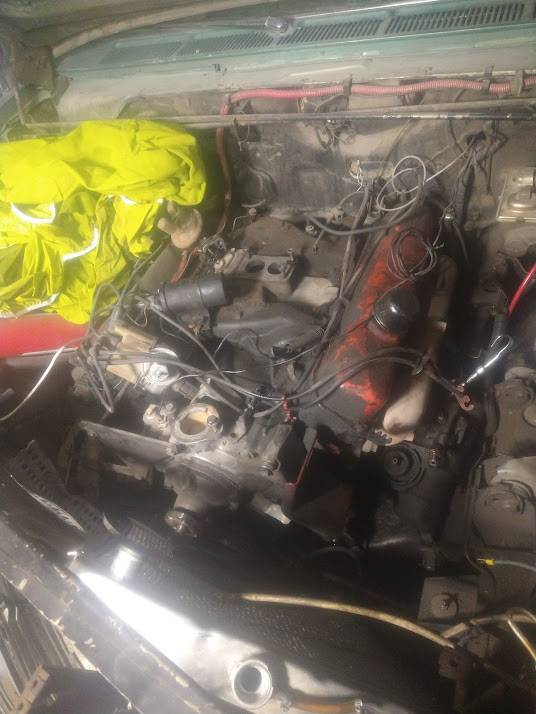 Still need to remove the hood. Radiator still held plenty good coolant as of this evening, but it lost plenty from that wreck too. Truly an INFURIATING reminder, but with much prayer and some pleasure driving Gertrude, I got over my murderous, vindictive urges, almost always when waking anyway. The sooner I can get this convertible converted to useful transportation, the sooner I can be a bit more forgetful of what I'm forgiving.

Yanking an engine and transmission entails more brute force than complexity as far as obstacles go. Think: 620 + 160 lbs = 780 lbs. While I have a hoist, sundry jacks and stuff, that still is a lot of dead weight for one old junky to maneuver. I recall the fun I had with the 400 and its associated 727 4 yrs ago. Still, I have plenty tools and know Archimedes Principle, so, with God's help, I should be able to swing the drive plant out of Mathilda's wreck and into Gertrude without too much pain or drama. Hooking the motr back up after mounting it will be no more difficult than it was for that damned gasket and block cleaning job a few weeks ago, and I will be delighted to put some of those parts BACK on the GOOD motor.

If/when I get an opportunity, I want to disassemble Gertrude's engine down to the bare block. I expect to find a crack in one of the 2 rear passenger side cylinder bores after cleaning things out. THAT would explain the accumulated crap in the coolant jacket AND the futility of the head gasket and block cleansing job.

But I'm in no hurry to do that autopsy. That engine won't move a shopping cart until serious effort is put into it, and I have better blocks for such effort. We're going to build that 400, though I want a forged crank from one of the spare 383s, if naught is amiss with them.

Wish us well for these plans. FIRST,I need to get Gertrude moving RELIABLY! Deo volente.....

I know you're a man with convictions and little ears ever present, but I find swearing helps a LOT during these jobs.

cantflip said:
I know you're a man with convictions and little ears ever present, but I find swearing helps a LOT during these jobs.

I KNOW it does, if by "swearing" you mean use of vulgar expressions. Not only do I use them with Texas gusto, but have instructed my daughter. That way, she won't be caught using the WRONG 4 letter expression for the wrong occasion. The first word I taught her was "bullshit!"

Such expressions are venal sins only. Only invocations of the Deity count as mortal sins. THOSE we don't indulge in here, though, growing up in Texas as I did, and having a maternal grandmother from SE Louisiana, I certainly used the common North American Saxonism as a youth, and only ceased after a Divine Miracle changed, and saved my life! So in THIS, I strive to set a Righteous example, and also, don't pretend to be holier than I am or should be.

Wow that just sucks, at least you have the plan B engine in waiting.
PS some of the most honest/ best people I know swear a lot.
My neighbors must think I have Tourette's when the garage is occupied.

65Fury440 said:
Wow that just sucks, at least you have the plan B engine in waiting.
PS some of the most honest/ best people I know swear a lot.
My neighbors must think I have Tourette's when the garage is occupied.
Click to expand...

I've been accused of such too! I don't call use of vulgar epithets "swearing" or "profanity" though, as both of those words have religious implications, and unless I've uttered something religious, be it holy or blasphemous, I can't rightly call it an oath or profanation.

Be this as it now is, for past sins of this sort, I might need to smoke some turd cigars in Purgatory for a few million years or so. But my God is merciful, so I'll try to get the Fan Club to pray me out of these little penalties.

Seeing the wreck of Mathilda or the new catastrophe easily tempts me to Sin just now, be sure of THAT bro!

cantflip said:
I know you're a man with convictions and little ears ever present, but I find swearing helps a LOT during these jobs.

Ha
My uncle was over and I was finishing up cleaning the battery tray on Lucifer, my International model 666.
After I was done, my uncle commented ‘You don’t cuss when you work on things?’
I told him that mostly boss the inanimate objects don’t have ears….

I only swear when I take something apart and see what some other idiot did that I have to undo.

Might be some metal shavings in a cylinder, what to do?
2