For your amusement and maybe inspiration, here is how I went about adding an electric fuel pump and a return style fuel pressure regulator. I spent a lot of time researching this topic, so I thought maybe others can benefit from that.
The back ground story is: My Imperial had the mechanical fuel pump blocked off and a no-name "click-clack" mounted all the way up in the engine bay when I got it. Now I do not know why the mechanical pump was omitted, but heard a lot about vapor lock, reproduction pumps of low quality, carter/edelbrock carburetors being sensitive to fuel pressure etc. So I decided I wanted to continue running an electrical pump and add a return style regulator, so there would be an constant stream of cold gasoline offered to the carburetor.
Researching online it seemed like a lot of people chose highly over dimensioned fuel pumps (for feeding a carb) and experienced a lot of noise.
I chose to use:
Fuel pump: Facet Gold Flo red top (480532E) based on reviews on quality and noise. Oldtimers might know it as a Bendix pump. (It is still made in the USA)
Pressure-regulator: Holley 12-887. (made in South Korea I think)
A benefit from having a single exhaust system is: there is plenty of room on the passengers side of the tank for a fuel pump. It could have been mounted in front of tank though. 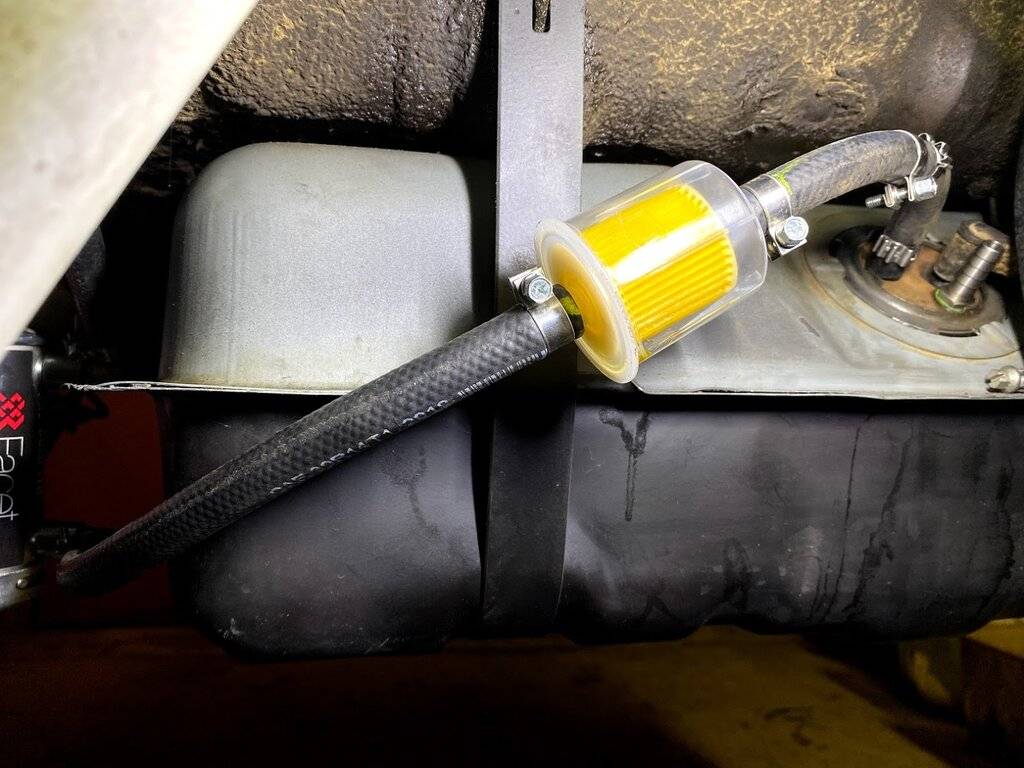 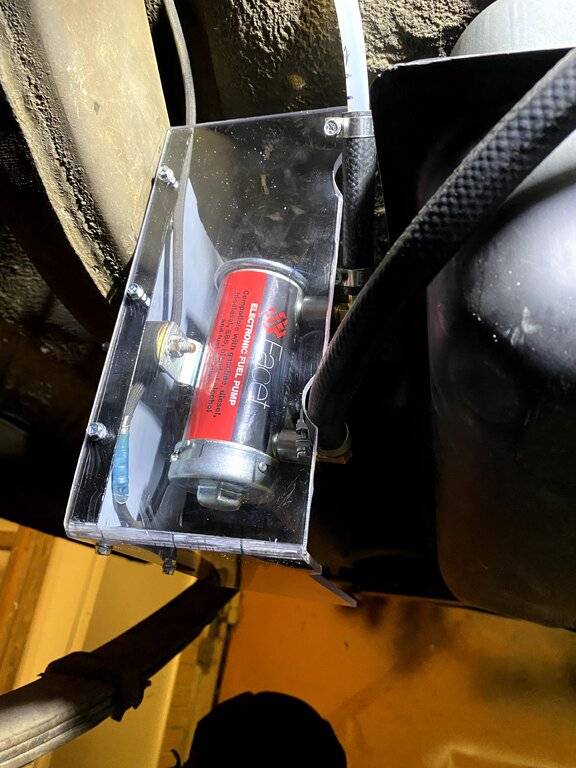 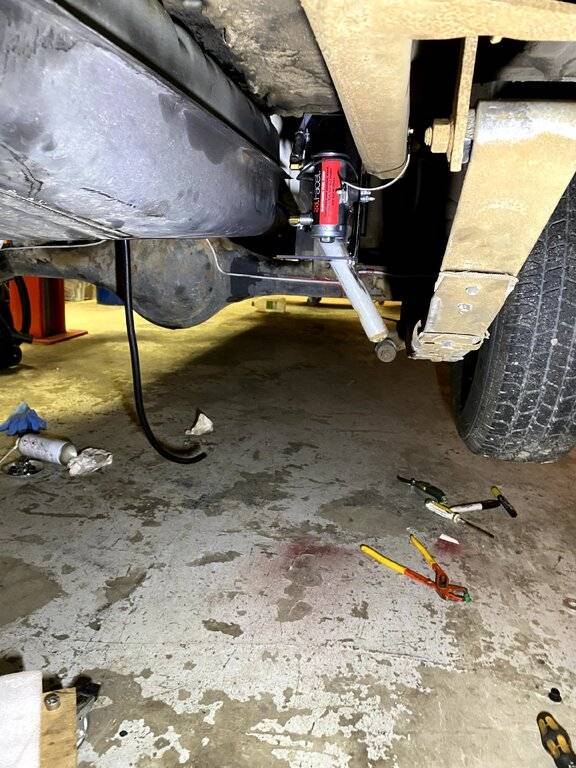 I mounted the pump as close to the tank as possible and as low as I felt comfortable with. I used a ~5/8" hole, which were already in the frame. The plate for the pump has a tab catching the top of the frame keeping it level. So it will pivot upwards in case it hits something. Don't know if that is understandable. I made a polycarbonate cover to protect it from water and dirt.
I ran a new PA 12 (oil resistant Nylon) tube from the pump to the carburetor as the feed line and used the old metal line as the return.
To be able to return fuel to the tank, I needed another connection to it. I did not wish to drill a hole in the tank, so I found there was just enough room to add a hose barb at the fuel sending unit/pick up. Now some might say the fuel should be returned below the fuel level to avoid foaming in the tank. I am sure that is true for EFI systems and high flow pumps, but I tried running this pump with the return line disconnected at the tank and pouring into a bowl. It is just a very small stream - no risk of foaming, but enough to keep "cool" gasoline flowing. 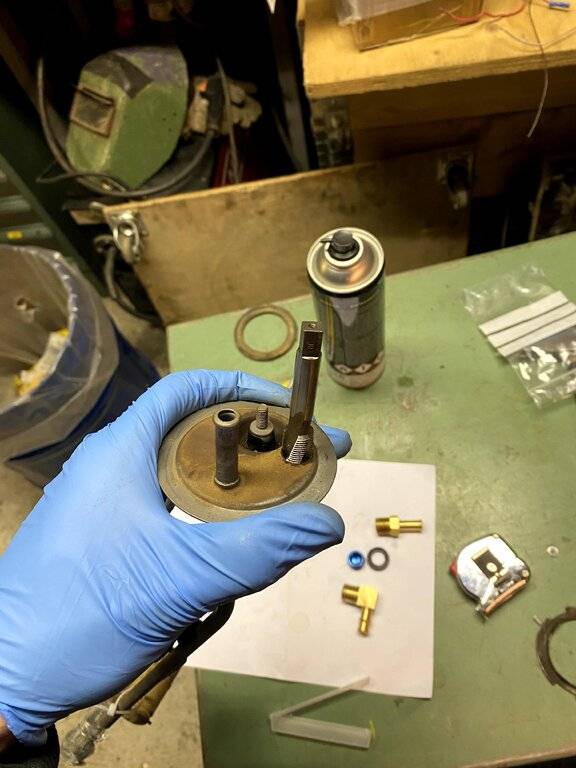 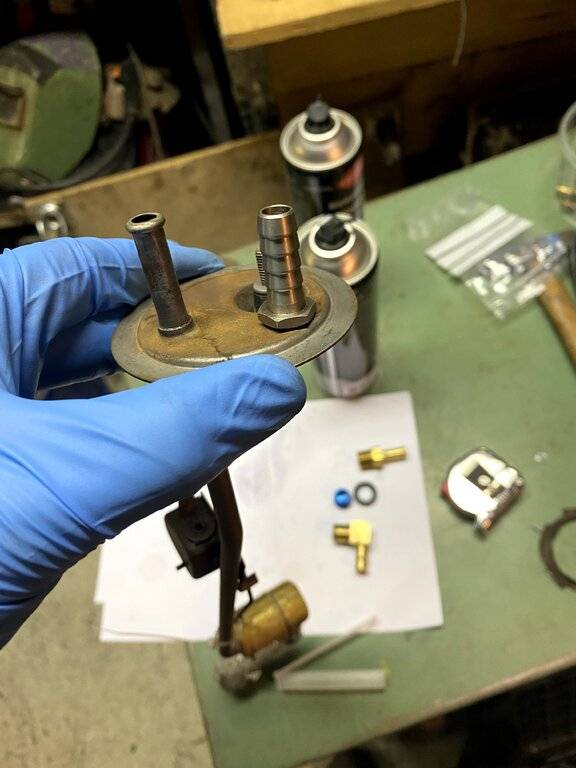 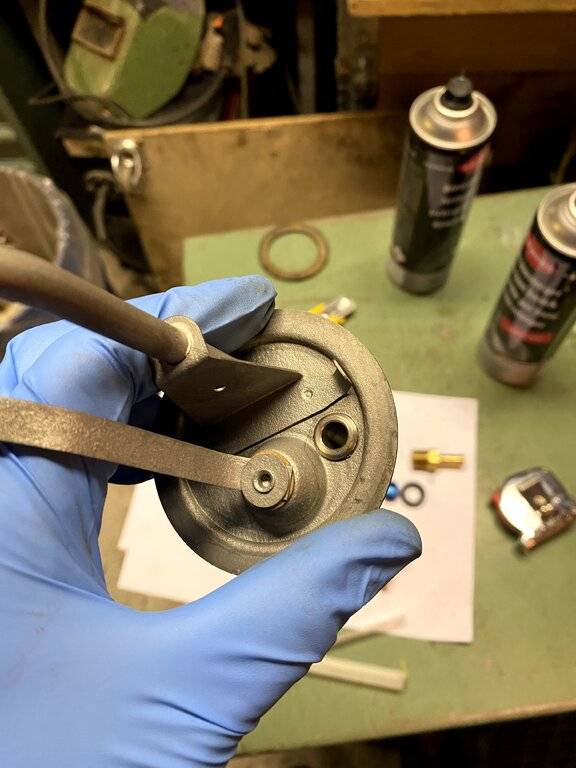 The pump feeds to a tee mounted as close to the carb as possible, to have as little "stationary" gasoline as possible. from there it branches off to the regulator, which returns enough fuel to the tank to maintain the set pressure at it's inlet.
The pump has a built in fine filter, but I added a coarser one before the pump as seen in the first picture.
The electric supply to the pump goes over a separate fuse and relay, which is activated by the ignition circuit. (one should wire an oil pressure into the circuit, so power to the pump is cut in case of an accident. Diagrams for this can be found online).
To mount all the new components, I heated and formed a black sheet of plastic, which it mounted with the existing screws along the passengers side front fender. It might not be very pretty, but neither is the rest of the car! 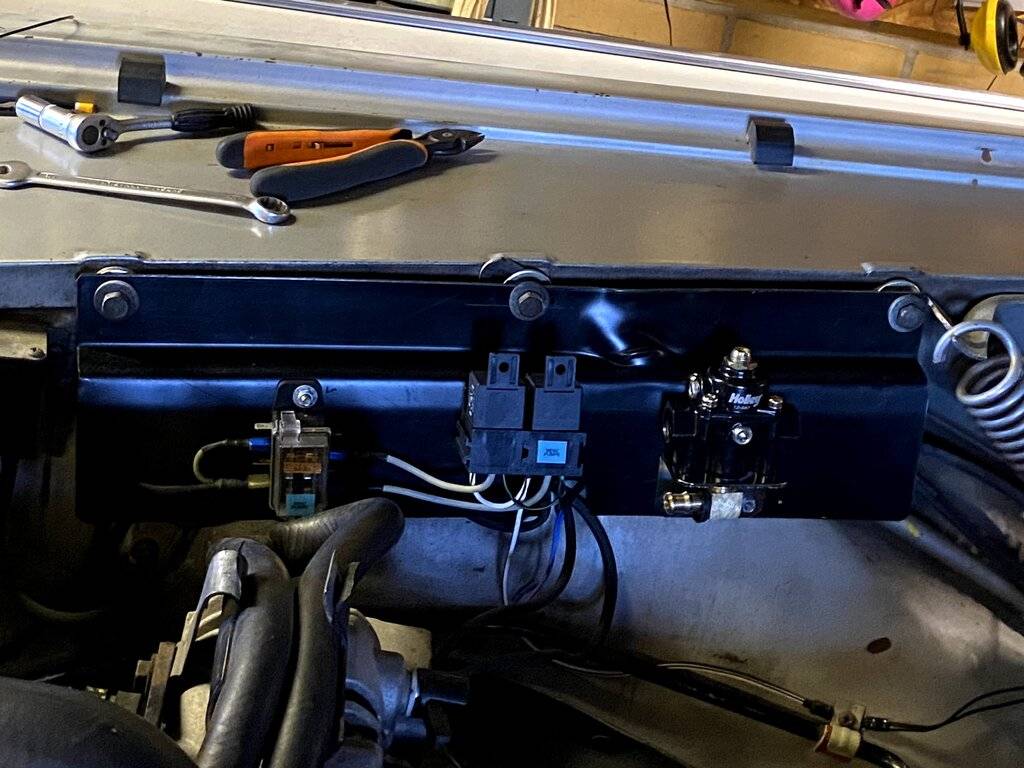 Using a heated socket to make the indentation for the stiffener tube on the inner fender: 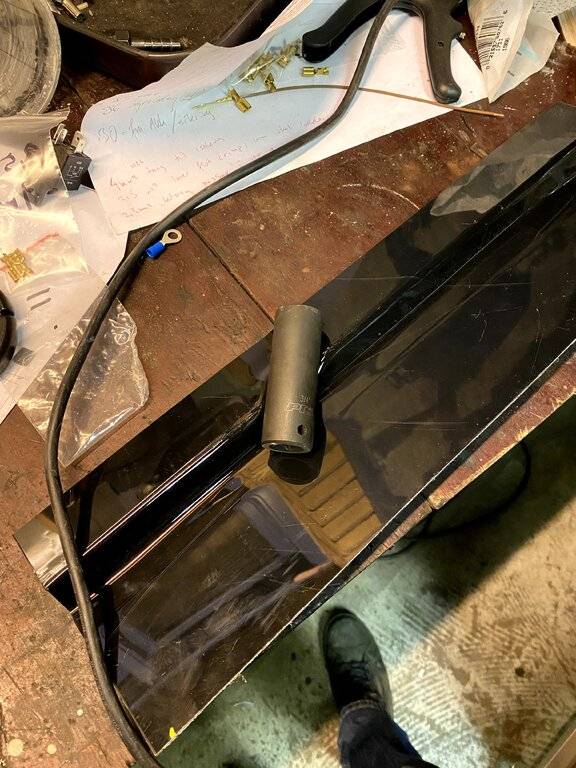 When I first powered the pump, I was quite disappointed seeing gasoline dripping from the carb. Cleaning needles and seats and adjusting float height and drop did not help. It turned out the pressure gauge I bought for the regulator shows too little. It showed 5psi, when it was getting ~7. Assuming my external gauge is correct, the gauge on the regulator shows 3psi, when it in fact is getting 5. 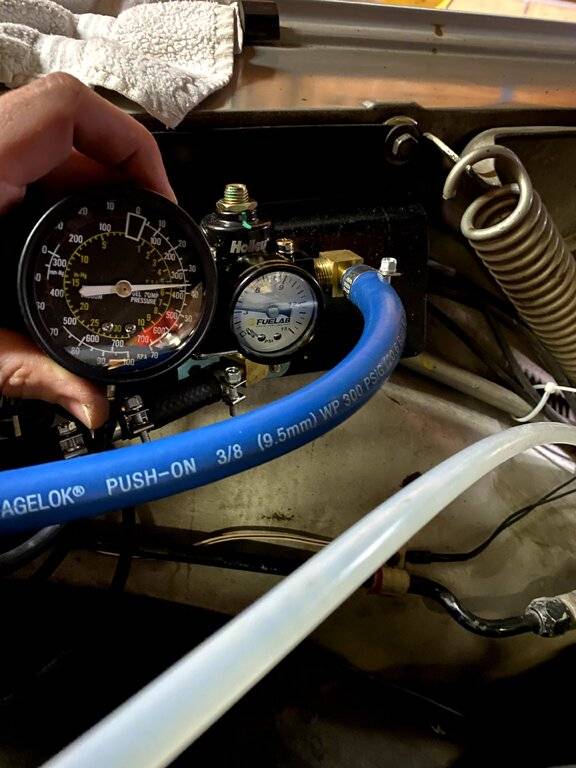 So far I am very satisfied with the setup. Have only driven about 100miles though. Opposed to the front mounted no-name pump, I can not hear the Facet pump, when I am in the car. When the engine and bay is hot and the car is idling, you can feel the feed line is colder than the rest of the engine bay. Having fuel to move all the time also keeps the pump cooler and less noisy. 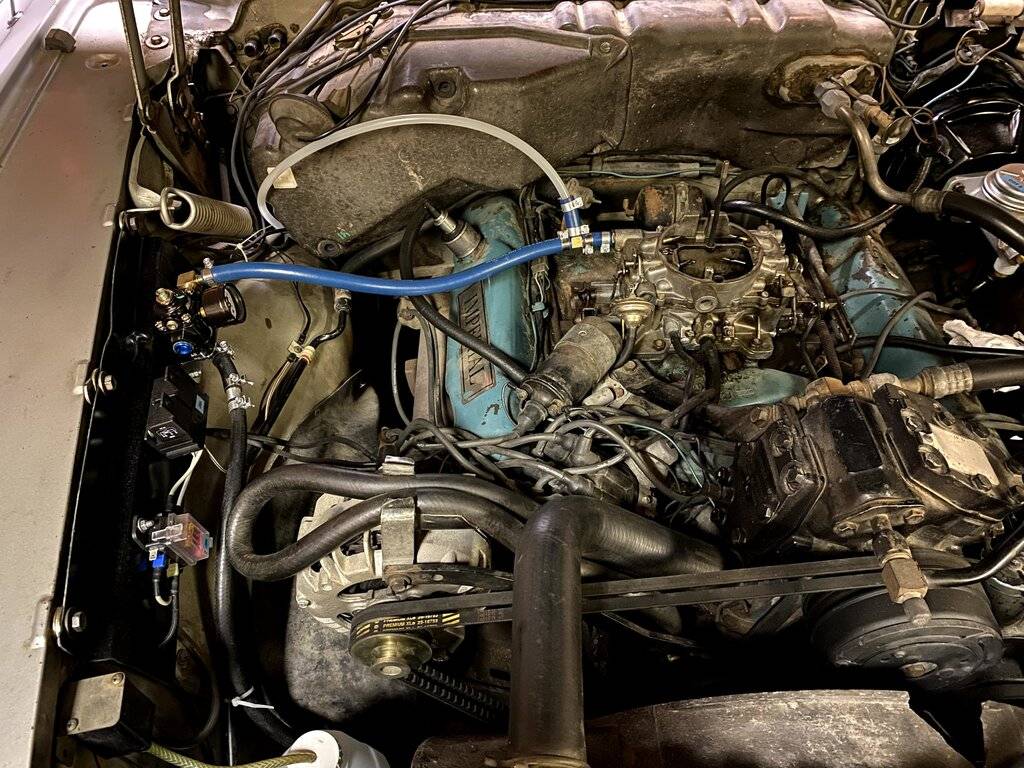