MetalManiacAZ said:
I'm assuming you're looking at that one in Fort Huachuca?
Click to expand...

I think that's the one. You see it on CL?

Since I handle both a 66 and a 68 let me tell you the differences.
Mechanically underneath are durn near the same.
The dash and underhood wiring is slightly different. Location of starter relay and length of related battety cables.
Trunk light in a 66 different location.
As alrwady mentioned steering columns different.
Door guts/ window mechanisms the same but vent wing wi dows are different by style but still interchange.
Some 68's will have a return furl line depending on engine size and emissions.
66 have external washer pumps, 68 inside washer jug.
Tailight wiring different. 66 all models has 2 bulbs per side. 68 newport 1 bulb per side but 309 and NYer has 2 per side.
66 4dr's have metal center pillar panels...68 plastic.
Seatbelts are different. 68 saw retractable mechanisms vs the spring loaded loopy things on 66 belts.and also shoulder belts wrre optional in 68 and related belts are totally different to 66.
66 saw bekts for 4 passengers. 68 you could get belts for 6. 9 for wagons
66 cruise o matic was a frankenstien electro-mechanical apparatus that worked ok.
68 cruise control is a 1 year only contraption that was not reliable.
66 headlight switches are the common style vs 68 toggle switches.
All toggle style switches can be a pain and there were a few different part numbers that do not ibterchange between 67 and 68.
68 dimmer switches do fail and can be rebuilt.
Both intrument clusters are a pain to service with the 66 being the worst,in my opinion.
66 had 2 speed and variable speed wipers. 68 had 2 and 3 speed. All have their own wiring and the variable speed has its own wiper switch.
Thats all I can think of at the top of my head. 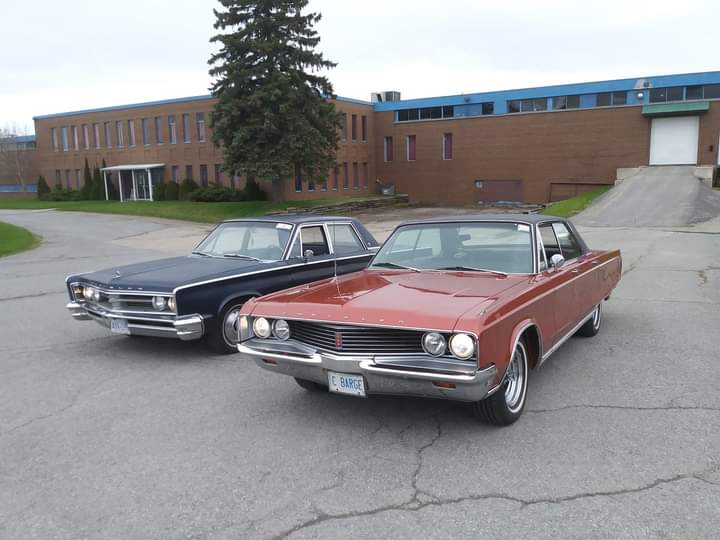 live4theking said:
I'm in agreement with @Big_John in regards to getting manuals from Faxon. They are clear reprints.
Click to expand...

These have better quality fonts, printing than the Detroit Iron CDs? I was mighty pleased w what I got for Tilly..... Damn! I want my wife home. I need to check w the bank and get this Show rolling!!! Y'all got my Enthusiasm Glands fizzing now.

cbarge said:
Since I handle both a 66 and a 68 let me tell you the differences.
Mechanically underneath are durn near the same.
....
Thats all I can think of at the top of my head.
View attachment 486471
Click to expand...

THANK YOU for every keystroke there! We REALLY LIKE the slab side series, of which 68 marked the period. Looks like my relay harness on Tilly still works fine, so I'll pop that over to the New Morris, along w the tranny cooler. That little thing DID help!

The condition of the sheetmetal on this one really sold me, IFF the pics show everything truly, as I think. I'll want to take my Rust Cancer Detector to the Usual Places, just to make sure, but this one looked good enough to convince the In-laws. Tilly has some cancer, some of it requiring prompt attention even before the Catastrophe.....

I have an eye on a 68 stub frame for old Tilly that will make her a LOT safer. I think the New Morris Mopar will be fine, and I pray I can keep this one that way for the rest of my daze this side of the Veil.....

Gerald Morris said:
These have better quality fonts, printing than the Detroit Iron CDs? I was mighty pleased w what I got for Tilly..... Damn! I want my wife home. I need to check w the bank and get this Show rolling!!! Y'all got my Enthusiasm Glands fizzing now.
Click to expand...

I'd go with the Detroit Iron piece.

I've gotten Ford manuals that were crap from other vendors, but I was also looking at price. They came on a thumb drive so I don't have to hook up a CD drive to my laptop, so that's easier for me.

Wait a minute... Convertible?
OK, ever own a convertible? You'll want to check passenger and trunk floors for rot.

Remember there's no such thing as a locked convertible... They are a utility knife away from a break in... They are noisier and usually leak like a sieve.

Just making sure you don't go in blind.

CBODY67 said:
From what I noticed waaay back then, the '68 is basically the same car as the '66, mechanically.

Each a slightly bit different, but from the same family?

I thank you deeply, with all my heart. I believe folks' opiions and assessments here all converge toward the basic answer:L they're basically the same car, under the cosmetics. They're certainly close enough for me to support a 68 with nigh all the stuff I got for a '66. In fact, I plan to get a 68 stub frame to render poor Mathilda drive-able again, if not pretty. The core support may also need replacing, if the passenger side got bent beyond repair. Time will tell soon enough there.

I LOVE having that Bendix dual pot master cylinder in the Intended 68! I've been very pleased with what I got for Tilly over a year ago now and suspect an original should rebuild to be as good or better. I will either delete the booster or get an electric vac and can to support it though. We don't like power brakes here. I jammed on mine plenty hard as it was, to no avail. The tires stopped and slid the VERY short distance, regardless of my wishes, but very well in keeping with Newtonian Laws. As I age, and grow feeble, my view on boosters might change....

Oh well! The endocrine roller coaster ride here has gone on long enough for now! God-willing, I can settle down with better steel, and resume the labor of slowly rebuilding it into the BEST Steel rolling around. An asymptotic goal admittedly, but one worthy of approaching all the more for that.

Big_John said:
Wait a minute... Convertible?
OK, ever own a convertible? You'll want to check passenger and trunk floors for rot.

Remember there's no such thing as a locked convertible... They are a utility knife away from a break in... They are noisier and usually leak like a sieve.

Just making sure you don't go in blind.
Click to expand...

THANK YOU VERY MUCH JOHN! Your WISE words already have been considered.

I admit I never have owned a convertible, but I always made it a point with any old car I've driven to NEVER keep anything really important in them. Mathilda couldn't be locked beyond the joke door locks either. Every car I've ever owned has been totally open to thieves. I have been burgled more times than I can count, but never too seriously, because I left them easy to open, and kept little in them.

I DO lock the steering wheel with an old fashioned Club lock, AND I always make the battery easy for ME to disconnect, THEN PUT A LOCKING PIN OR 2 IN THE HOOD! This makes a good, simple brute force security against car theft for a few minutes, and thieves hate spending those extra minutes.

Anyway, a convertible will be no more open that Mathilda was, by my practice. I lost a $90 pair of JBL bluetooth speakers out of her at Sprawlmart one day, but kept the stereo and its speakers. Not so bad as thefts I suffered years ago. Still not good though.

I wouldn't buy a ragtop if I had anything BETTER within a days drive here for what money we could raise. THAT ultimately decided matters for us. I'll use my "Sheetmetal Tester" of course before sealing the deal. The pics look good, better than what I have now. We all shall see....
You must log in or register to reply here.