So, my 71 newport custom 383 car is a pretty good runner. I drive him to work once a week. 30 miles with a 2000' elevation gain. 7K to 9K elevation.
The original intake was removed and an aftermarket intake was installed with an edelbrock on top of the intake. I have had the edelbrock rebuilt by a local shop. I had it rebuilt as it was a very sluggish car when trying to get it going. Once going, the car rips. Runs 80 like a dream.
But I can't get the thing to not want to fall on it's face when I push the gas.
Down shift works fine and once it down shifts it gets up and goes.
Yesterday after getting to work I parked the car. About 15 minutes go by and the stucco guys ask me to move the car. I get it started but when I try to get it moving it pretty much just dies. over and over again it just dies when put into gear. When not in gear it revs just great and sounds like a great motor with plenty of response. But once it goes into gear it pretty much fizzles out and dies. Both in reverse and in drive.
After about 4 hours of work the engine is cooled down and the car starts just fine and runs just fine with the exception of the super sluggishness.
So, seems there are two problems here. A vapor locking problem after driving it 30 miles up hill.
And the other problem of the thing being a literal slug.
I know, what kind of carb? what kind of intake? 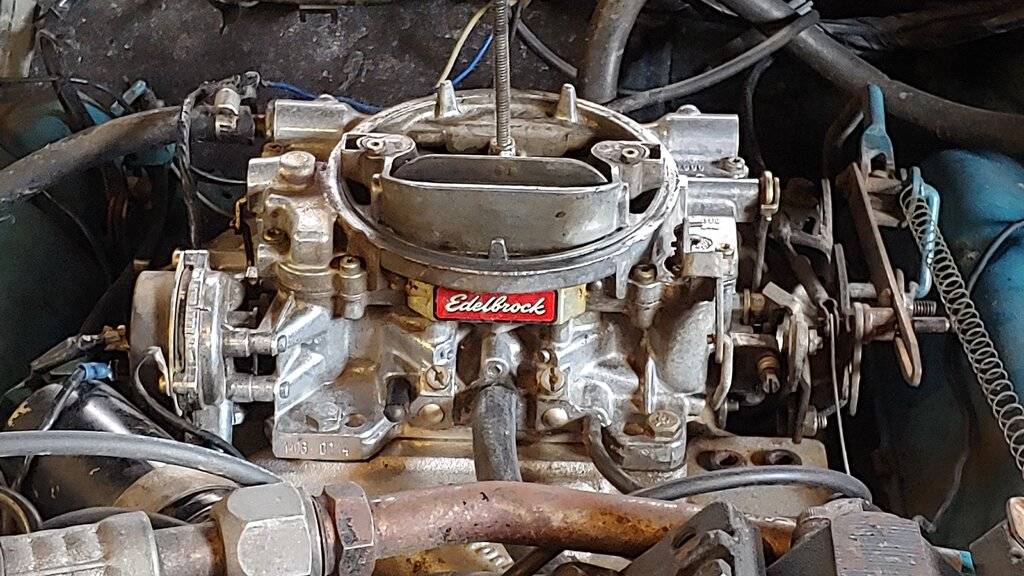 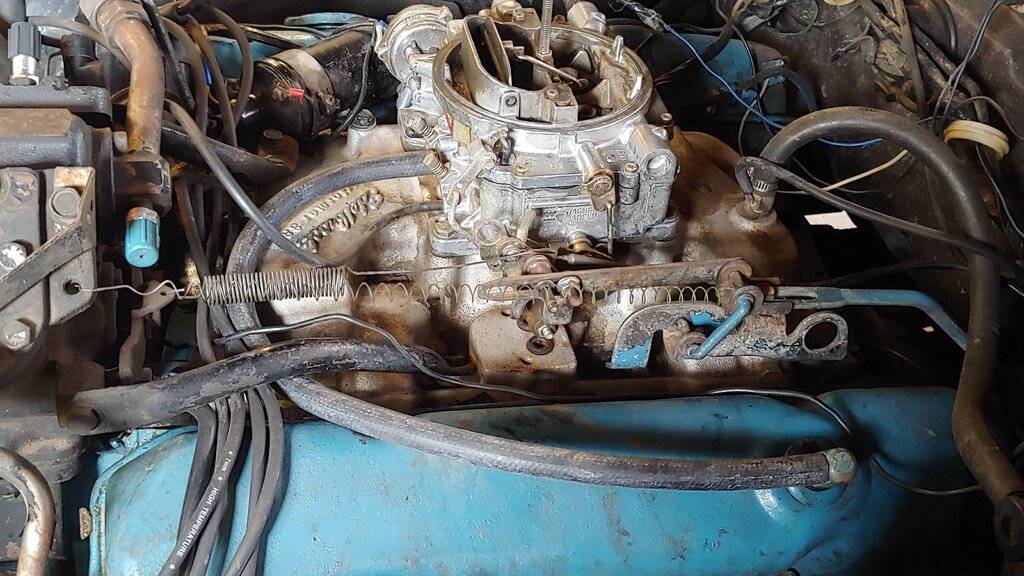 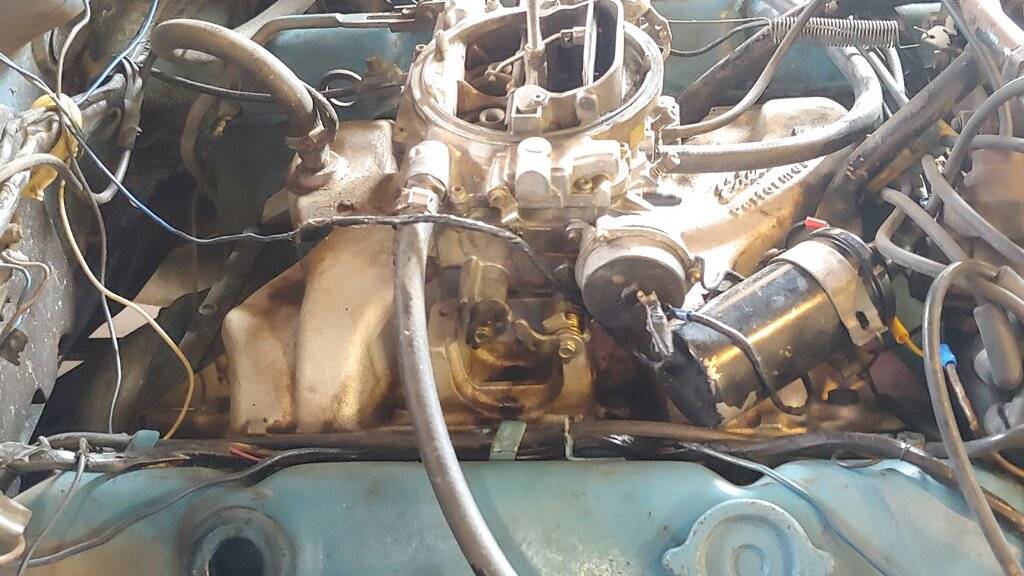 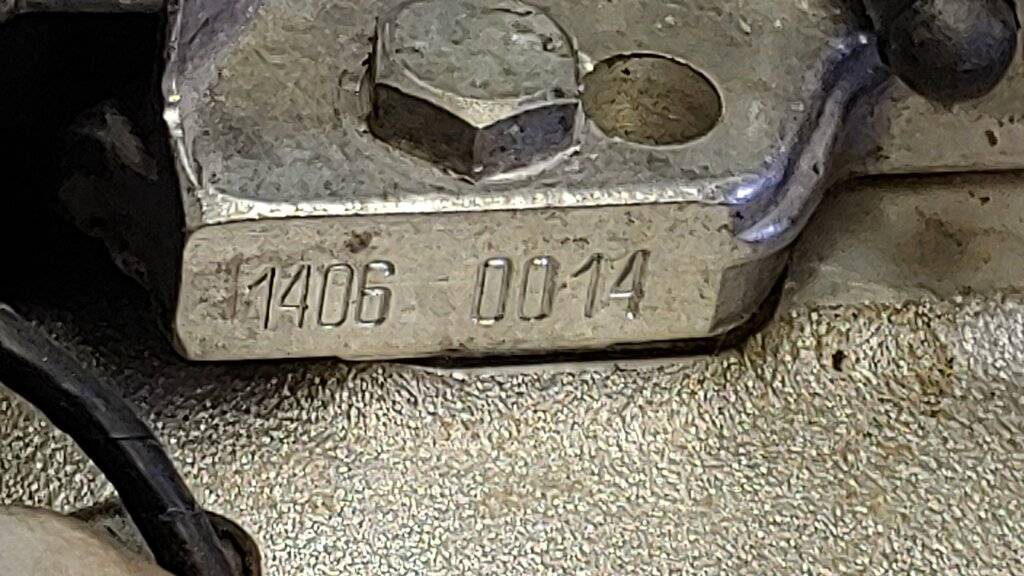 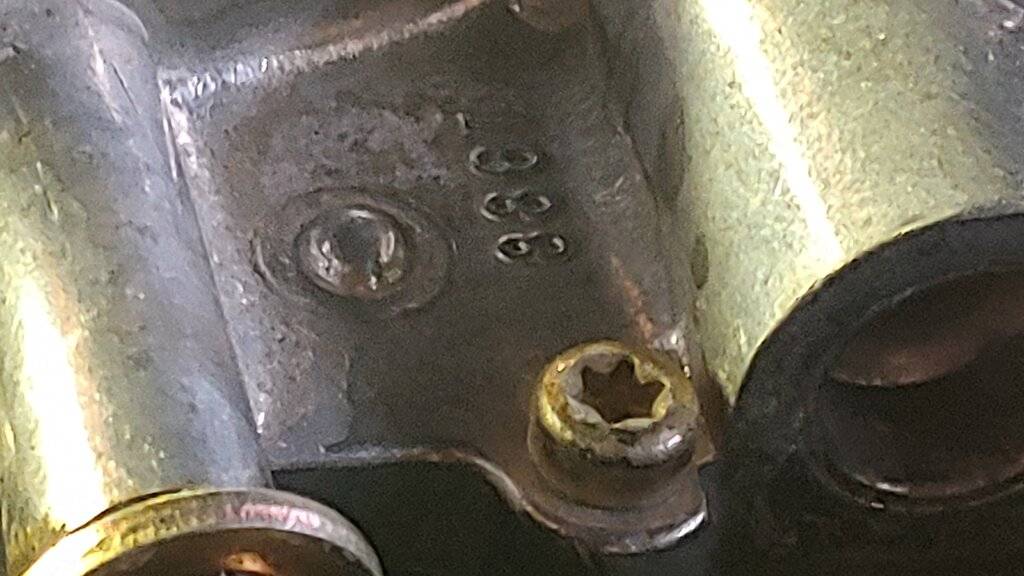 I have for years put electric fuel pumps onto my vehicles up here in altitude. That is usually the first thing I do to stop a vapor lock issue. Works great up here.
So, fuel pressure would be the first thing to test then? Maybe the current fuel pump is giving up the ghost slowly.

Points or Electronic ignition? I've seen it where, if it's really filthy/ gummed up inside the distributor, it can affect how the advance comes on and lead to the "stalls as soon as you put it in gear" problem.

I presume there's no vacuum leaks either...from your description of how it runs out of gear, I'd say no, but thought I'd mention it.

I will do a quick vacuum check in a little while.
i have not paid attention as to points or electronic. Will look.
4

Dear snake boy, You have your vacuum advance hooked up to manifold vacuum, that doesn’t work for nothing. Especially at 7000 feet! When you hit the gas it retards the timing 25 degrees. 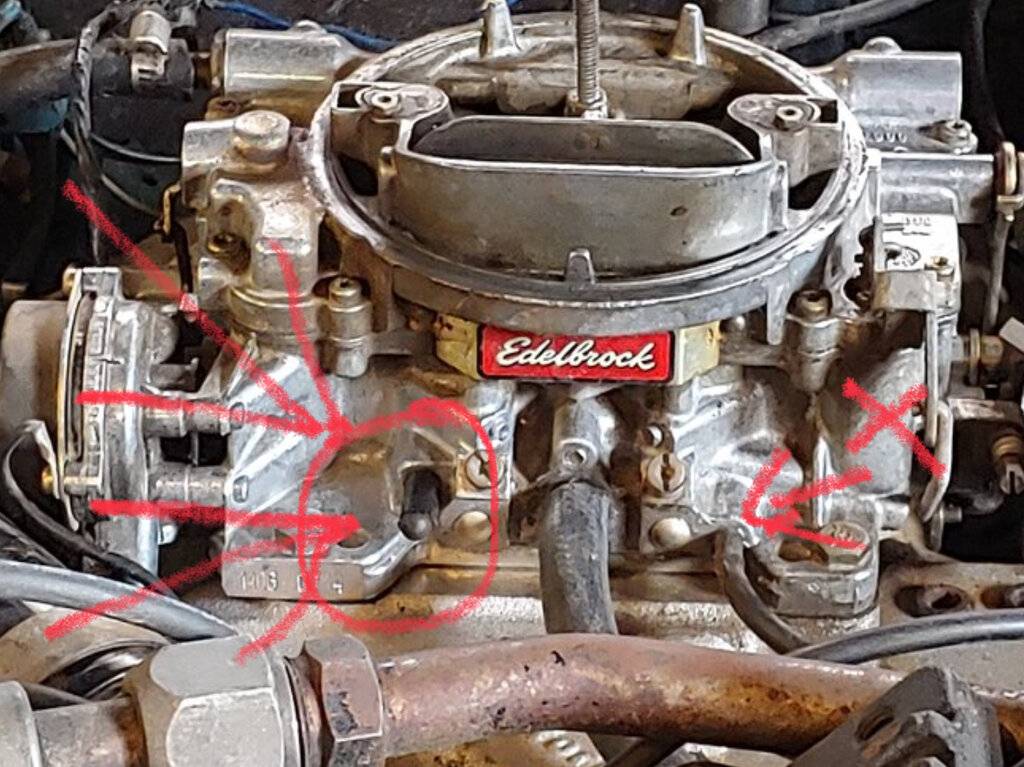 413 said:
Dear snake boy, You have your vacuum advance hooked up to manifold vacuum, that doesn’t work for nothing. Especially at 7000 feet! When you hit the gas it retards the timing 25 degrees.

And you put a 4 bbl intake/carb on an original 2 bbl carb car as stated, which means you have a 2.7 axle ratio instead of 3.2 and a low stall torque converter instead of the high stall one. They factory engineered complete packages and doing part of the conversion never yields the results you expect from "a 4bbl swap".
4 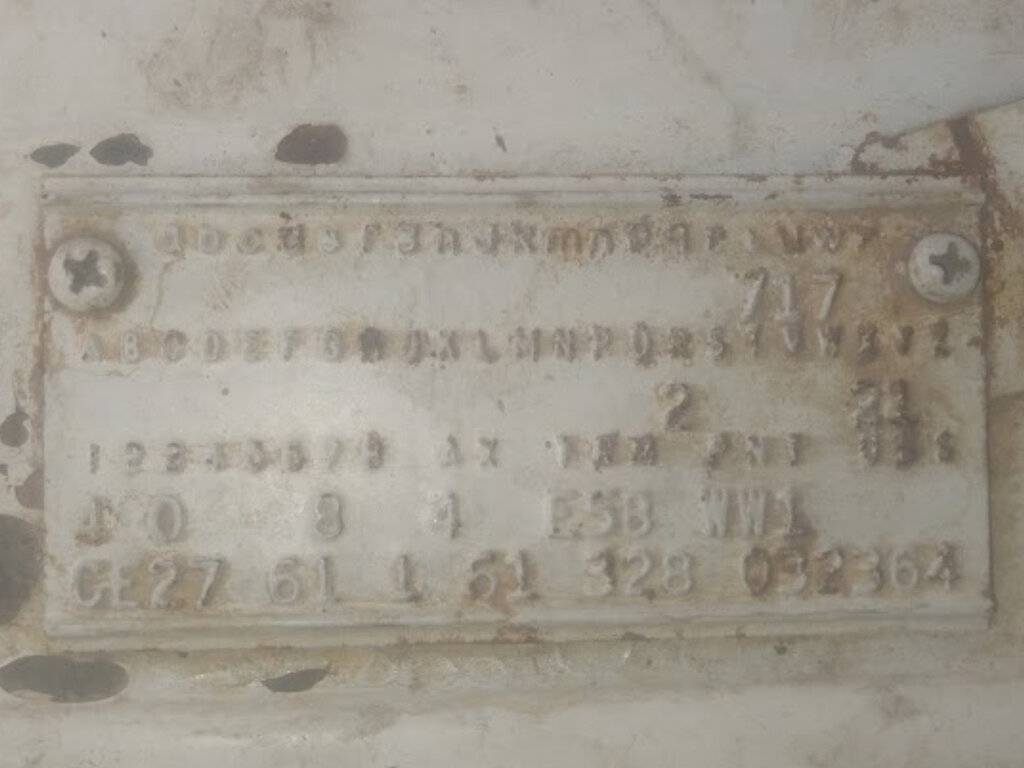 "Retard the timing" only means with respect to where it might be at idle, NOT a retard in the normal sense of the word. Using intake manifold vacuum is just fine, might even put timing in the motor quicker than a ported source, BUT with throttle, all of that additional advance goes away. Using that set-up, you need to find a intake vacuum delay valve (which Ford was famous for using in the 1970s) and turn it around so that it holds the intake manifold "charge" in the vac advance can, which will keep the vac advance advanced until engine rpm rises enough for the mechanical advance to rise a good bit with rpm.

Other than that . . . are you consistently buying gas at the higher elevation?
Has the carb calibrations been altered for the higher altitude you are normally driving in? Check the FSM for guidance on this. In some respects, advancing the base timing 2-4 degrees might help compensate for the jetting a bit, too. The thinner mixture is harder to fire-off than a more dense mixture tends to be.

Backstory on the use of the vac delay valve (Caution: use of non-Chrysler brands will be mentioned). In the middle 1980s, GM had a 9.5cr 305 4bbl V-8 which went into Federal-spec emissions 1/2T pickups. It had a detonation limiter and ran the vac advance off of intake manifold vac rather than ported vac. They ran very good, for what they were, until they got some miles on them, then they got "doggy". New plugs and such didn't help. Our tune-up tech was at GM training and the instructor showed them a "vacuum trap" (two delay valves in parallel, with the same single vac line from the vac source and a single line going to the vac advance can), with a GM part number for it. Our guy brought it back to us and we ordered some immediately. I also got into the service manual and verified that the vac source was indeed manifold vac from a carb port.

At the time, we had one of those trucks in our parts fleet, so it was a test bed. I installed it as instructed and then drove it. It made a huge difference in off-idle performance. It kept the vac advance charged until engine rpm and more centrifugal advance could take over. So, we ordered more of them for use in the shop.

The other situation where those trucks would get unresponsive was when the wire to the detonation sensor (in the rh cyl block drain plug hole) would short out on the exhaust pipe. When that happened, they got really sick until the wire was repaired.

When I saw what was in that "vacuum trap" apparatus, I laughed. Ford used gazillions of those things in the 1970s to delay vacuum going to the distributor and such, so turning them around backward was interesting. Many were thrown away to get the engines re-tuned "in the field". BTAIM

413 said:
Dear snake boy, You have your vacuum advance hooked up to manifold vacuum, that doesn’t work for nothing. Especially at 7000 feet! When you hit the gas it retards the timing 25 degrees.

I will set timing and unhook the right hose. plug the manifold vacuum nipple.

Would the circled nipple on the left be ported vacuum? Or supposed to be?

Yes I can get ethanol gas but only at one location in our county.

saforwardlook said:
And you put a 4 bbl intake/carb on an original 2 bbl carb car as stated,.
Click to expand...

Wait wait. I did not state that I PUT the 4 barrel set up on the car.
I am slowly working on undoing the mess that was left on the car since I purchased it.
C

With the engine at hot base idle, one port should have manifold vacuum and the other one with a very weak vacuum (which is ported vacuum).

I'm not necessarily looking for performance or throttle snap. I would just like the car to act like an old mans car and at least get out of it's own way.

I have hot rods for throttle snap.

CBODY67 said:
With the engine at hot base idle, one port should have manifold vacuum and the other one with a very weak vacuum (which is ported vacuum).
Click to expand...

Ok, so would it be better to use the ported side than to use a vacuum delay valve backwards as suggested above?

I will try the ported vacuum anyway for now.

I am not opposed to finding an original set up and putting this thing back to a 2 barrel. Opinions?
C

Puttiong a 2bbl back on it might not help/solve anything, I suspect.

Yes swap the vacuum hose to the plugged one. And advance the timing a bunch, It should run better. That is if the vacuum advance even works.

Forget all the funky valves and crap it should be a big red flag that you don’t want to copy anything
Ford did in the 70’s. LOL
C

A friend once re-tuned a mid-'70s Ford 302 V-8 pickup. Had a pile of rubber hoses and such in the corner. Replaced it all with probably 2 feet of rubber hose, at the most.

At that higher altitude, it might scare one as to how much base timing the engine might take before it clatters, I suspect. 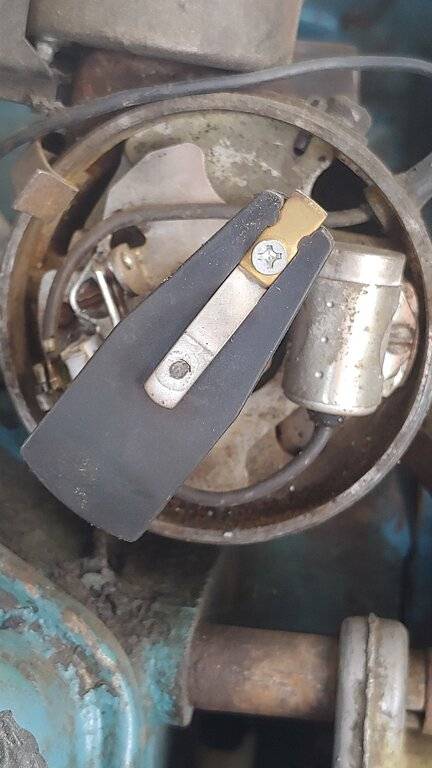 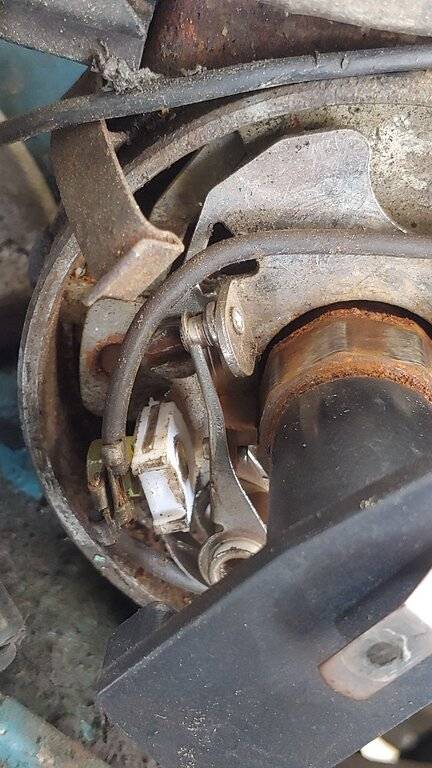 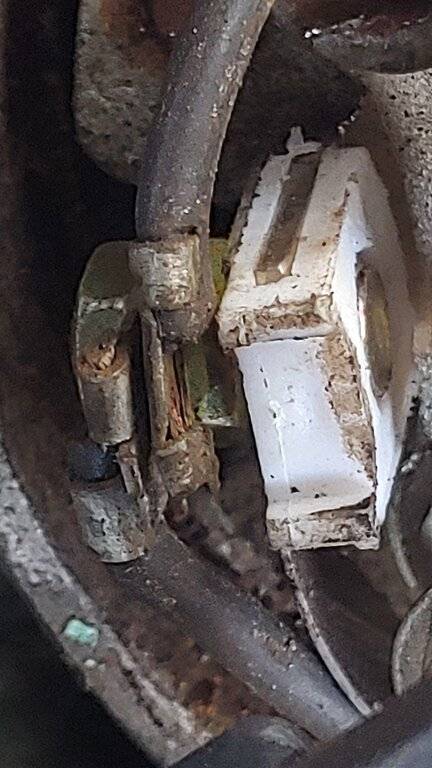 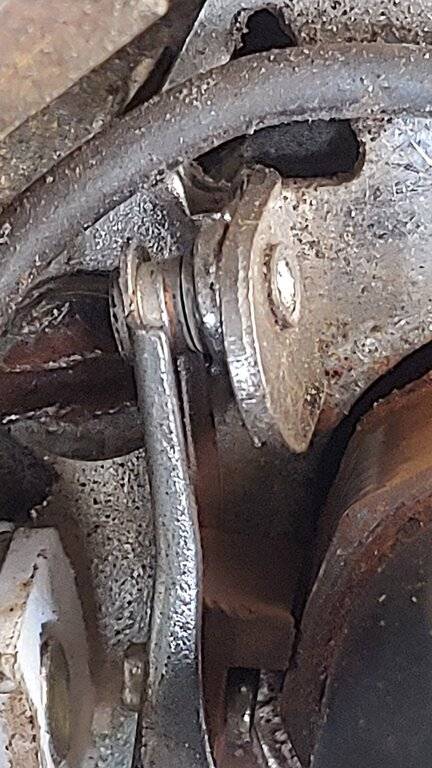 Ok, I have had this problem with this C body once. the only other time I tried to find the timing on the first C body I have owned.
With the air conditioner bracket and the idler pulley I can't see the timing tab to even see what the timing is.
I can see this much of the tab. I can't tell what the marks are with only seeing that one partial side of the tab.
Any suggestions?

Big vacuum drop/lean spike when shifting into gear, cause?