CBODY67 said:
Seems like the seals that need to be made should be made out of masticated rubber, same stuff the upper control arm water shields are out of. I somewhat doubt that HD has that in stock or anything that can really tolerate automotive underhood heat (even at normal levels).

That's why I mentioned plastic, the temps will (should) never reach the point it would melt, as long as you got the right kind of plastic. But I'd look for something rubber like first.

Yes, I watched the temp in front of the radiator before I replaced on the cheap. I used HDPE from a fertilizer spreader but other polyethylenes will work. I think they even sell sheets of it now. Black drainage tubes made of it too. I can confirm that it is very heat resistant because I had to bend it with a heat gun and it fought me the entire time. I also think wood paneling, sheet metal/aluminum, fiberglass/plastic wet location panels, and even a plastic corrugated for sale sign wood work. All painted or covered of course. Kids plastic toboggans are made of this stuff too. But I had only purple so no. You can see I spend too much time checking things out and I do have a fiscally responsible (frugal) bias. But my fertilizer spreader with a rusted axle was my savior. I've used bits of that for a ton of things. Its doesn't glue or paint nicely but its durable. Like a cutting board which is also an option. Going to make seat belt clips to mimic the stock broken ones. If you had a good saw and old bald tire that might work. I used tire sidewall for stuff before. hard to cut.

Okay, here's what I've done this weekend to alleviate the heat & overheating.

Then I fabbed up an air dam from angle iron, landscape plastic border & nuts, bolts, washers and screws. All the metal parts were painted flat black to hide the shiney bits. Had to cut & notch the angle iron in a couple places so the ends didn't stick out and look goofy. Even cut a few 3 1/2" sections of the plastic to serve as reinforcement "ribs" to mount on the backside so it doesn't deflect too much at hwy speeds. Once it was all mounted up (about halfway back from the bumper to the radiator support) you really can't see it. Only extends about 3" below the bumper, and the curvature is such that it looks almost factory. 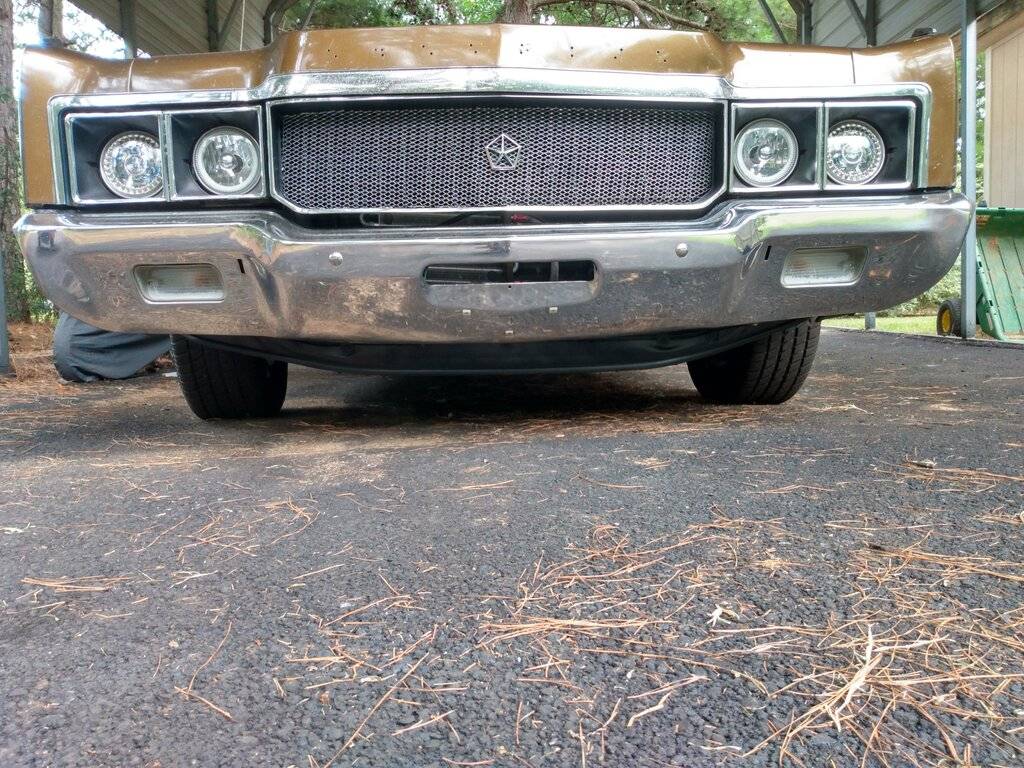 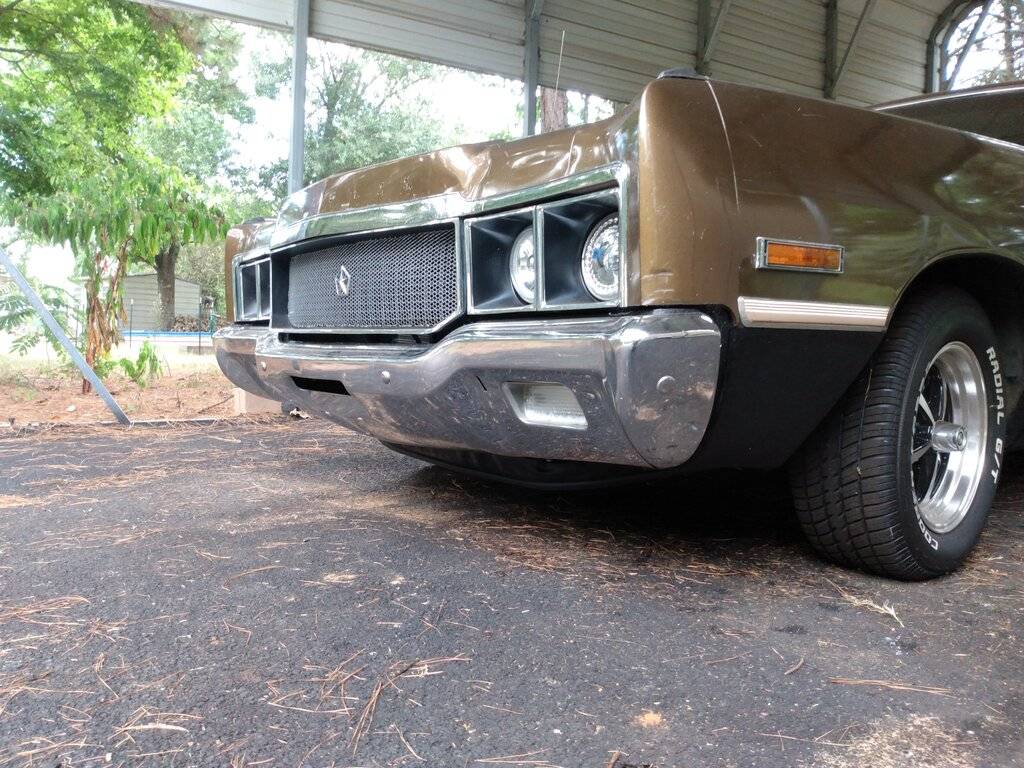 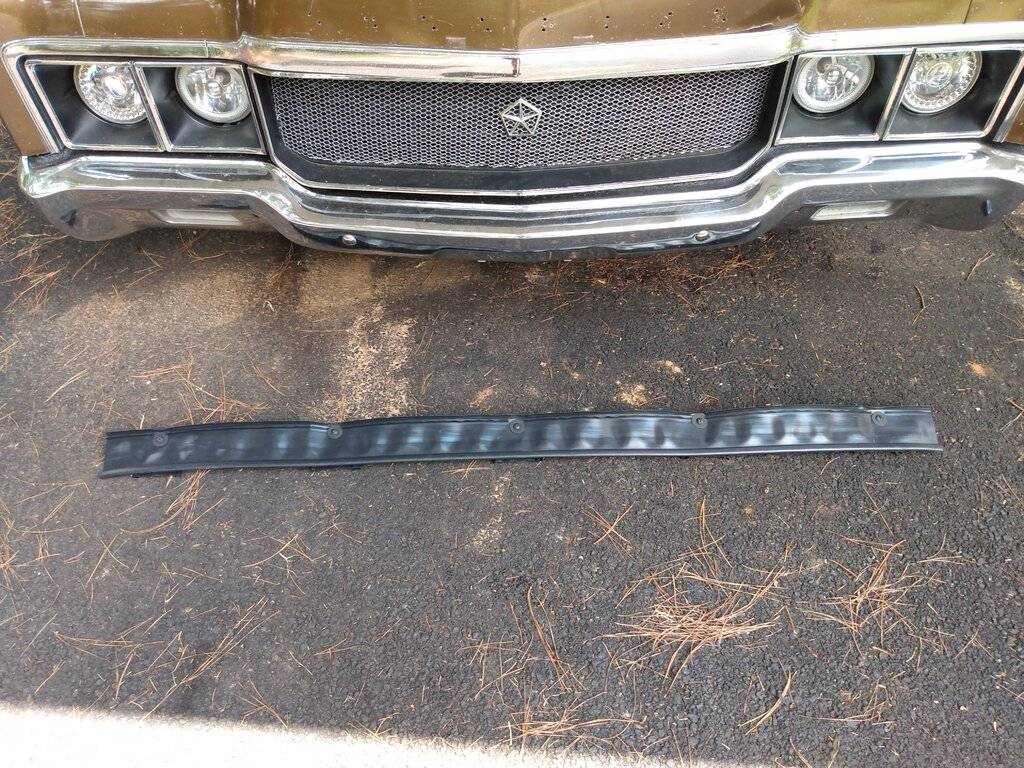 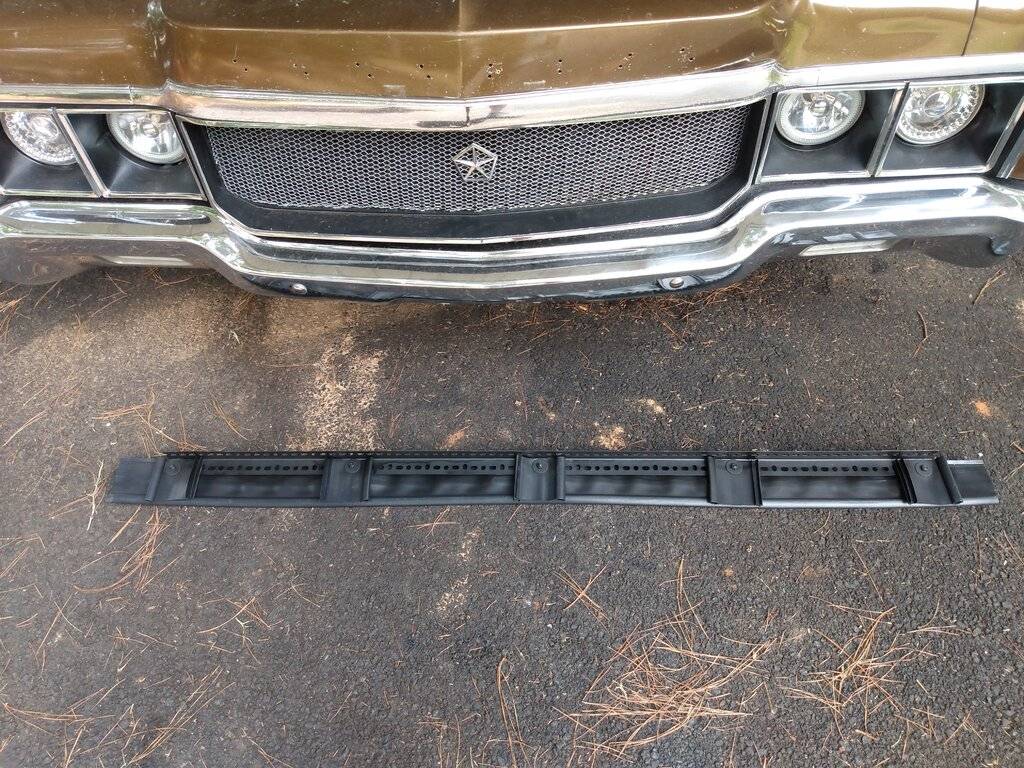 I still have to cut the roofing felt and spray it with rattle can rubberized sealer (flex seal) and fit it from the bottom of the bumper to the angle iron bracket. I'll use plastic body clips and washers to secure them. The felt will be clipped to the INSIDE of the bumper bottom and on top of the air dam bracket to maintain smooth airflow and hopefully prevent wind catching it and ripping or tearing it off.

I think the air dam is subtle, being black it blends in nicely with the underside & shadows. I'll take it out later today and report back on how well it all works. I still have more needles, jets and springs if the carb is still too lean, and if it all looks satisfactory, I'll reinstall the thermostat.

And I also got a replacement 16 psi radiator cap too.

Thanks for the pics. That chin spoiler is pretty subtle. The optimal one would be very noticeable so somewhere in seems best. I got a factory one from a junked late model and am considering a trimmed version of this as an option. But not before I take care of some tuning.

Took my Chrysler out yesterday to a local car show. It was 2 towns over so it was a real test of the mods I had made to address overheating issues I suffered the last time I went there. With a jetting change and a DIY air dam installed under the chin, the temps never peaked over 190°, so I call that fixed.

Laser thermometer registered 120-130° around the engine bay, except for near the headers where it climbed to as high as 220. So the air dam did make a noticable difference in extracting heat and air. Driving there, ambient air temps were in the 80s, and the car ran around 180. Driving back the air temps were mid 90s, and it ran a little warmer, 185. Got up to 190 at the lights but dropped down again once it got moving. This was with the thermostat reinstalled and a new 16 PSI rad cap.

Thanks to all who offered advice. Rejetting the carb solved the motor temps and the air dam I fabbed up fixed the under hood heat issue.

Excuse me for interrupting
The oem thermostats were 190 degrees. Check the parts book instead of arguing with me. The cooling system is designed to be used WITH a thermostat.
Today's gasoline requires a 195 degree thermostat
195 IS NOT WARM! Either is 210. Normal temps should be 195-210
240 is hot
Using a thermostat less than 195 degrees allow fuel to collect in the intake and it gets burned off in the cruise mode -so the air fuel ratios ping pong. This is not hearsay - this is from tuning lot's of old mopars from mild to wild. The proper operating temp also keeps the oil cleaner and stops sludge from forming in the engine

High under hood temps are caused by poor tuning and cooling issues - not the operating temp of the thermostat. Having the crossover blocked on the intake and making sure the manifold heat control valve is either removed or held wide open.
High temps also affect the a/f ratio making the problem worse.
C

A few respective thoughts:
Prior to about 1969, all OEM car thermostats were 180 degrees F. In the middle 1950s, many Buicks were even 160 degrees F, which is another story. In 1969, thermostat temps were almost universally increased to 195 degrees F to have a hotter engine for emissions purposes. Our new '72 Chrysler 400 had an OEM 185 degree F thermostat in it from the factory. In the middle 1970s, a friend sent a tech question about thermostat temps to Edelbrock and got a handwritten reply from Vic Edelbrock which stated that thermostats below 160 degrees F would cause more cyl bore wear and that the 180 degree F thermostat was much pretty much the accepted "optimum" temp thermostat.

Agree, 210 degrees is not hot, unless the engine has no real radiator pressure cap (or a failed one), which can result in "water boiling" at 212 degrees F rather than at the elevated coolant temps of 260 degrees F. At this time, almost every vehicle on the road runs at or near 210 degrees F (which is mid-gauge on the temp gauge).

One of the S-A Designs carburetor books of the 1980s (Holley or Rochester) states that more power is made with a mixture that is leaning toward the lean side and coolant temps which are on the hotter side of 190 degrees F, BUT in continued WOT operation (as in police pursuits on the Interstate), there needs to be enough enrichment and coolness to not cause detonation or oil breakdown under those conditions, I suspect.

In the later 1950, when vehicles were transitioning into V-8s going where narrow inline 6 cyl engines used to be, a possible contributor to overheating was the lack of open air space under the lower hood lines. Some vehicles were worse than others in this respect. Chrysler's transition into the wider and more open underhood area was the 1965 C-body cars. With the 1974-'78 C-bodies being more evolved in this respect, compared to the '69-'73 C-body cars, by observation.

An internal combustion engine coolant thermostat is really a heat-related variable restriction. The stated temp is really the temp at which the thermostat starts to open, not the full-open temperature, it has been stated. Although once the opening starts, it happens quite quickly.

In respect to the '72 Chry 185 degree F thermostat, I asked the old-line Chrysler service manager at the local dealer about that additional 5 degrees. He kind of laughed and stated "They'll run at the temperature they want to". "They" meaning "engines".

In our modern times, it seems that many seem to be concerned with "numbers". Like the "number" has to be at the stated level or the car with suddenly self-destruct, or similar. "Change the oil at 5000 miles", so that the engine doesn't seize-up at 5010 miles, for example. In vehicle design, there usually is a safety factor in most of the designs, probably a bit more on some brands than others, but enough extra strength to do what the designs intended and do it reliably for a long time. Some of these safety factors can be extended with syn lubes and fluids, by observation.

There tends to be a lot more to an effective cooling system than just thermostat temps, with respect to over-heat situations. Radiator internal condition at the bottom of the core can be unseen and decrease heat transfer capacity of the radiator, from my own experiences with a crossflow radiator. Just as accumulated "sediment" at the rear of the engine block (usually the lower point the cyl block with the engine in the car) can also decrease heat transfer into the coolant from the engine block.

Every engine design has its own "likes" for how warm it likes to run. A 195 thermostat in an LA engine can yield an engine which never gets hot, but a 195 degree F thermostat in a hot rod 440 might need additional cooling capacity. At this point in time, finding the sweet spot for each respective engine/vehicle combination might deviate from strict factory OEM specs a bit, but when it's found, result in an engine that is "happy". Using, of course, the OEM factory specs as a starting point.

Enjoy!
CBODY67
You must log in or register to reply here.

Looking for pictures or a description/diagram of 68' 300 NON-a/c heater box?