What was the factory carburator for '70 Sport Fury GT?

Thank you for help! So there are two left...
D

Holley 4360, vacuum secondaries. Carb was a POS but that was the factory unit for 350hp T-Code cars.

Sebastian Dirlewanger said:
Thank you for help! So there are two left...
Click to expand... 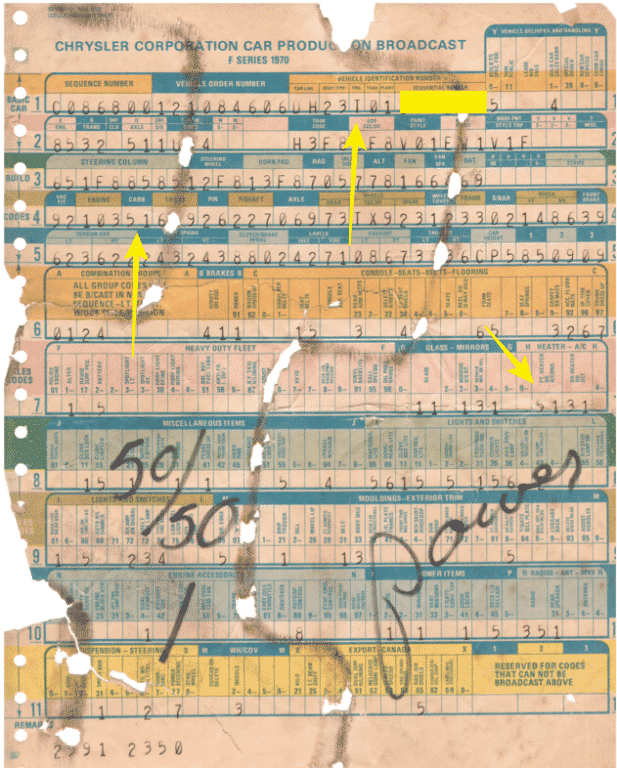 Hi Buddy! My boardcast sheet shows exactly the same! 51 on carb section! So factory my car had Holley 4366 carb. If you tell me you have one for sale, I'll be in heaven...
Thanks a lot for your help!!!
Sebastian
S

Thanks a lot for help in this thread! Sebastian

Sebastian, you would be well advised to forget that original carb. They were just junk when new and after about 2 years of normal use, the metering blocks would warp and leak. Most carb rebuilders will refuse to try to rebuild them because their success rate is so low.

I worked in the fuel systems lab in that time frame at Chrysler central engineering in Highland Park, Michigan. I bought my avatar 1970 Chrysler 300 with standard T code engine from a used car lot in Birmingham, Michigan in 1972. It was two years old with 29K miles on it, and after about 2 months of use of the car, it started running like crap and leaking fuel too. So I tired to rebuild it with no success, so I asked the Holley Representative stationed on site in our lab about what could be wrong. He told me to wait a minute and he would bring a fix out to me from out in the storeroom. It was a brand new Holley 4 bbl and told me to use this one and junk the one I had. He told me it is the only solution to the problem that would last about 2 years. I converted to a Carter AVS carburetor used on the 440HP engines after that revelation and have never looked back. If you want to put an nos correct Carter carburetor for an HP engine on your car, then I do have one of those I would sell to you.

If you want to retain a Holley 4 bbl that looks very much like the original ones under the hood and mostly covered by the air cleaner, go with a modern aftermarket Holley 4 bbl - those are very good carburetors that are made of quality casting material and go the distance. The problem Holley had back in 1970 was that their carburetor was much larger, heavier and more expensive to build compared to the Carter AVS series, so Holley decided to use cheap casting material to better compete with the lower prices of the Carter AVS to build. Chrysler had strict cost constraints and so Holley had to do something to keep Chrysler's business. Chrysler discontinued using the Holley 4 bbls completely about 1972 as I recall due to huge customer complaints with failed 4 bbls but Chrysler still bought the Holley 2 bbls, which also had warping problems with the airhorns when the air cleaner wingnuts were over tightened over time and heating and cooling cycles.

So you have been forewarned. For me at least there is a limit as to how far I will go with using exactly original parts in my restorations. The Holley 4 bbls and Chrysler's bakelite heater valves are just two parts I refuse to put on my cars no matter how much I want to keep them exactly original.

I will only add that the Holley 4 bbls, however poor quality, did have better acceleration feel especially off the line than the Carter AVS carbs when new, probably due to a richer off idle curve and/or better accelerator pump design.
Last edited: Jun 8, 2022
You must log in or register to reply here.