Hot town, summer in the city
Back of my neck getting dirty and gritty
Been down, isn't it a pity
Doesn't seem to be a shadow in the city
All around, people looking half-dead
Walking on the sidewalk, hotter than a match head
--John Sebastian, Mark Sebastian & Steve Boone, 07/04/1966
​
Urban automobile drivers, living between the Tropic of their hemisphere and its 35th latitude learn to loathe that season when the sun passes beyond the ecliptic, making their days longer and so much hotter than those nights which popular balladeers assure us are the ideal time for mating. This humble author likely has melted about as many cylinder heads as loins during the daze of his youth during this season, and has lived to learn a few precautions to take against either such event as one of the few desirable consequences.

Spring is THE season to prepare the cooling system for the summer inferno. This season's agenda filled the most of any we've had since purchasing Mathilda 5 years ago. Matters foreseen and surprises alike made for a very full weekend's labor.

1. The Coolant Pump: After breaking the cast iron thermostat housing flange on the original water pump housing in March 2017 as a consequence of sanding off no less than 3 layers of old gasketing, which doubtless contributed to the over-tight state of the water neck bolts. I don't know if that flange had cracked under the gaskets or only during my sanding, but it broke off, forcing me to use shellac to glue it back on until I could get the new aluminum pump housing I purchased. I bought a Gates 42032 pump and sealed it in VERY well using the supplied gasket and Indianhead shellac. This would make difficulties later....

February this year, after noticing the unmistakable smell of antifreeze vapor after running some time, I saw some weeping on the lower formed radiator hose, which had softened more than I liked since its installation, and seeing how the worst of the softness was where it fit over the pump housing, I replaced it with a Gates Green Stripe flex hose and called it good. It occurred to me then that it may have been the pump leaking a little, but seeing no further coolant after refilling the system, I conned myself into believing All was Well.

I began having to top up the coolant level by April, and knew I had a leaky water pump. I'd already purchased another Gates pump, and an iron housing for that, having been alarmed by reports of some sino-aluminum pump housings being sold with substandard port sizes, and my general distrust of chinese metallurgical quality. I'd wanted to replace the pump Christmas 2019, when I replaced the timing chain, and THEN learned to rue the decision of using shellac to seal the water pump into the housing! That pump wouldn't BUDGE, short of some drastic effort which would ruin it, (I thought) and probably the housing too, so I reluctantly replaced it in Dec, 2019, rationalizing that it was still relatively new, with "years of service left in it."

After replacing the passenger side driveshaft Sunday, 04/25 and taking Mathilda for a test drive. things took a quantum step for the worse. The thermostat hung, the temperature soared to 240 F before the damned thing opened, and I lost over a gallon of coolant all in a drive taking less than 10 minutes! I got home, announced the new crisis to the Babushka after telling her that the axle no longer leaked oil and that we had rear brakes again. I then pulled the defective Gates stat, and we ran Mathilda for the last week of April with 7 gallons of tap water in jugs in the trunk and no thermostat. I observed that same Sunday evening that only ONE leak originated in the pump bearing, pointing out the green telltale rows down our ColdCase radiator. Despite my careful bonding jumpers, or because of them, the damned thing had electrolyzed. More on that in a bit....

I purchased a genuine Mopar iron thermostat housing, along with the pump and the 383 Commando attached to it in 2018, Its a nice housing, for a 383 Commando in a 1969 B body. I have another housing from my 1977 400. I thought that with the Commado housing, I could easily swap it in for the sinister sino-aluminum housing I ran and still run with. So, I spent the last week of April sanding, thread chasing, wire brushing, fitting that housing. I noticed it has a 1/4 inch NPT port on the passenger side, while both the early (1958-66) model housings AND my aluminum one have a 1/8 inch NPT port on the driver side, both up on top meant for temperature switches or sensors. The Commando housing also has but one 3/8 inch NPT port for the heater hose, with one 1/2 inch port, presumably for either the temp gauge OR a heater hose port, with a 1/2" to 3/8" NPT reducer bushing. The old housing, and the aluminum "1 size fits all" housing have 2 3/8" NPT ports AND the 1/2" NPT port.

I sure like the older housing and I've thought seriously about welding that little broken ear back onto the thermostat flange and just using a nut and washer below it to insure that the thermostat housing/water neck stays put. Hell! I used SHELLAC and the nut and washer for a month until I GOT the aluminum housing and it held just fine for that period. IFF I find a GOOD pre-1967 housing for a reasonable price, be sure, I'll snap at least one up. But after carefully checking the port dimensions on my aluminum housing, and seeing that they're good, I no longer worry much about this one. If I were running some high RPM machine, maybe I would then, but us, 3000 rpm occurs only monthly or so....

So, in addition to prepping that Commando housing, I spent the last week of April getting some hardware together; nuts, bolts, washers, nipples, tubing, hoses, gaskets, sealants, adapters, coolant, radiator, transmission cooler et al. We've been meaning to install a good tranny cooler for a couple years, and this is the season to do it.

Saturday, April 24: I removed the Cold Case radiator, fan, alternator and PS pump, then the coolant pump housing, all very easily with my impact wrench. (I DON'T use such to INSTALL o the engine, but to remove a bunch of low torque bolts, sure!) This proved to be of decisive advantage.

Upon laying the aluminum housing down, I decided to tap on it with a rubber mallet and see if by some miracle the pump itself would come loose. It DID! I guess the impact wrench vibrated the seal made by the shellac just right, allowing me to easily tap and gently pry the old pump out of the aluminum body. (Or my prayer to St. Joseph which I always say before starting work on a new project got me a minor miracle!) This proved to be a tremendous blessing.

Having meticulously prepared the iron Commando housing, it went on flawlessly, with minimal blue RTV waste showing at the gasketed joints with the engine block. I mounted the power steering pump with a couple small shim washers to somewhat better align it with the crank pulley. ONLY when I started to mount the alternator did I DISCOVER MY STUPENDOUS FOLLY!!

Post 1966 water pump housings are made for post 1966 ALTERNATOR BRACKETS!!!!! I called it a night in disgust, contemplating drilling the 1966 alternator mounting plate to accommodate the damned Commando pump body. The Babushka decided it would be better to declare the iron body a loss, use the aluminum housing again, as it was made to accommodate both early and late model alternator brackets. I had an extra set of gaskets, and it took mere minutes Sunday to clean the aluminum housing up.

The new Gates pump works well, as did its predecessor until the bearing wore out. I've meticulously followed the specified belt tension from the FSM, even obtaining a duplicate of the old Mopar belt tension tool allowing the use of one's torque wrench, though the 5 lb per 1/4 inch deflection method served well before then. I've noted that Gates, like too many formerly U.S. based corporations, opted to use cheap slave factory labor in east Asia rather than pay American workers a decent wage to continue making good quality wares. I hope they at least keep their rubber goods at high quality. Such is what I value from them the most. Their thermostat failed me spectacularly, after their pump wore out in just 4 years. The one I've installed to replace the first will be the LAST I buy from them.

2. Thermostat: I've purchased Stant Superstat 45478 from Rock Auto until Feb 2020, when they no longer were available from them, so I bought a Gates GATES 33038S, and installed it this past November. Despite appearing to be nigh identical units, the Gates thermostat never worked nearly so well, normally requiring a temperature rise to 200 F before fully opening. I've read such is normal for nominal 180F thermostats, and that the Gates and Stant units use very similar design, with the lip around the poppet, very similar "power pills" driving the poppet, jiggle pin placment when jiggle pins and holes are used et cetera. I've recently learned that Motorad subsumed Stant, from my local NAPA, so if you liked Stant, go with them. I have a Better Idea here.... 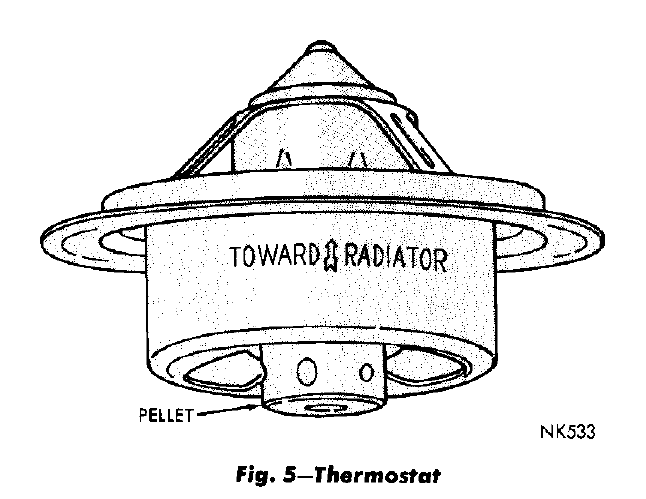 Folk more learned than I recognize this as I recently discovered as a Robert Shaw type thermostat, which Mopar apparently equipped their mid 1960s B/RB engines with, if not also the A block and /6 engines. These aren't today's $5 thermostat, as a quick look for Robert Shaw 370-180 thermostats reveals, with Holley's (Mr. Gasket) coming in at about $18.50, Flowkooler's 370-160 in at about $27, Milodon, Speedway Motors getting ~$36 for their knockoffs of this EXCELLENT thermostat. I bought the Mr. Gasket one, and ground my gums upon seeing the "Made in China"on the package. Despite that, for NOW I've never seen that 383 run with a stabler 180 Fahrenheit temperature.

The old Robert Shaw-style thermostats started to become scarce when Chrysler started to use the "normal" style of thermostat. Not sure why the price has escalated so much, for a "Made in China" situation. Unless somebody figures that the "niche market" will pay it.

Thanks for sharing your comments and experiences,
CBODY67

CBODY67 said:
The old Robert Shaw-style thermostats started to become scarce when Chrysler started to use the "normal" style of thermostat. Not sure why the price has escalated so much, for a "Made in China" situation. Unless somebody figures that the "niche market" will pay it.

Thanks for sharing your comments and experiences,
CBODY67
Click to expand...

The sino-shops actually have puked out quite a few Genyoowine Immeetashun BobbyShaw thermostats, and get about $9 when they can't snooker some yankee imperialist running-dogs like Holley to prostitute their label for them. I suspect that anglo-american made sorts require shops to break out obsoleted tooling and staff alike for a production run. THERE lies the high cost! The sino-shops doubtless benefit from having bought whole american factories out of the Rust Belt during President Ronald MacReagan's Enlightened Patriotic Reign, so they just had to learn how to run the old tooling to turn out faithful copies. Holley, and probably others have clearly helped school them in this product.

RobertShaw type stats get pitched to two markets: hotrodders and Old Timers, with the former subsidizing folk like Yours Truly!

This thermostat really is the best one I've ever installed though. VERRRRY SMOOTH and dead on specified temperature! Let's see how long it lasts now....
You must log in or register to reply here.