Now that Gertrude runs at a GOOD, stable temperature, I can start the LONG HAUL to really restoring her to her beauty AND functionality. The flipper admitted one egregious mechanical fault on purchase, "Damn power steering fluid just POURS out that pump." This exaggeration over-stated the problem a bit, but ANY leak of hydraulic fluid onto other components in the engine compartment damages them, especially coolant hoses, wires and such. Power steering fluid, like brake fluid, can extensively dissolve other non-polar substances. So even a SMALL leak should be PROPERLY remedied as quickly as possible.

Gertrude showed clear evidence again of military mechanical slapdash maintenance in the likely original power steering pump, and the high pressure hoses to the steering gearbox. I actually own now an expensive assortment of hydraulic fittings which clearly got cobbled together to expedite a replacement when/where the proper high pressure hose couldn't be had. Two woven steel hydraulic hoses were connected together to make the length from pump to gearbox with an obscene surplus, and about 6 fittings needed to connect them to each other and the pump on one end, the gearbox on the other. CLEARLY NO THOUGHT FOR EXPENSE OCCURRED! LOOK at what I removed from Gertrude's engine compartment this Sunday afternoon. These two hoses probably, with the adaptive fittings, could have bought half a dozen proper high pressure hoses purpose made for Mopar C body power steering. 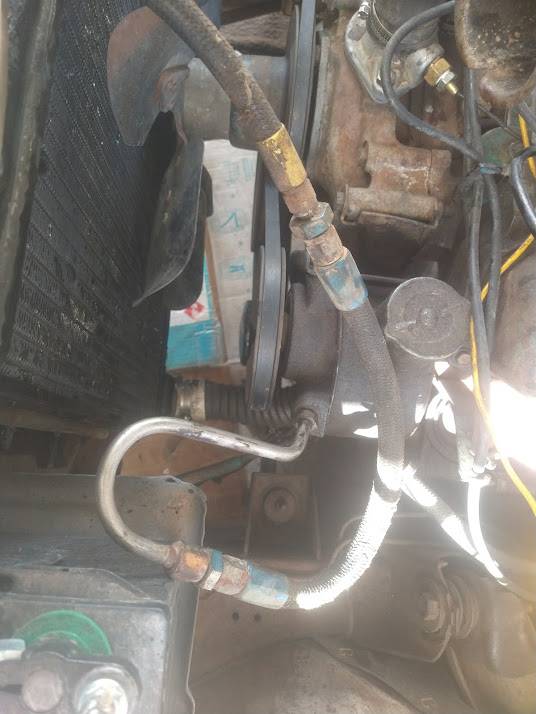 Such waste typifies military procurement in the U.$ from George Washington's command to this very day. Heaven or Hell only know what these were actually meant for. Here is the relatively new hose cannibalized from Mathilda, as the pump its attached to in this pic; 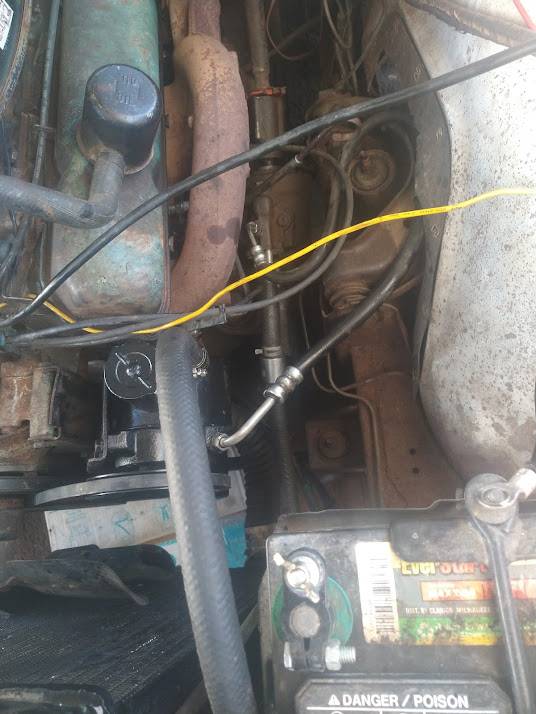 The replacement pump is none other than the same one I found this past Spring for about $80, rebuilt from a 1959 Imperial. It doesn't leak, turns very easily, and delivers power to the gearbox. My sole complaint is using the 5/8" low pressure hose for the return line, but, such large diameter hose assures the return line pressure WILL be LOW, and once I install the cooler I also got this Spring, it will keep this power steering system COOL. My sole expense for today's replacement was for several quarts of power steering fluid, used to flush the old stuff out.

Switching the gearbox to the larger diameter hose proved to be the soul of convenience; requiring merely that I switch the return line fittings. The 5/8" fitting is aluminum, while the 11/32" one that came on Gertrude's box is ferrous. The O-ring shown in the picture actually came from the Gertrude gearbox 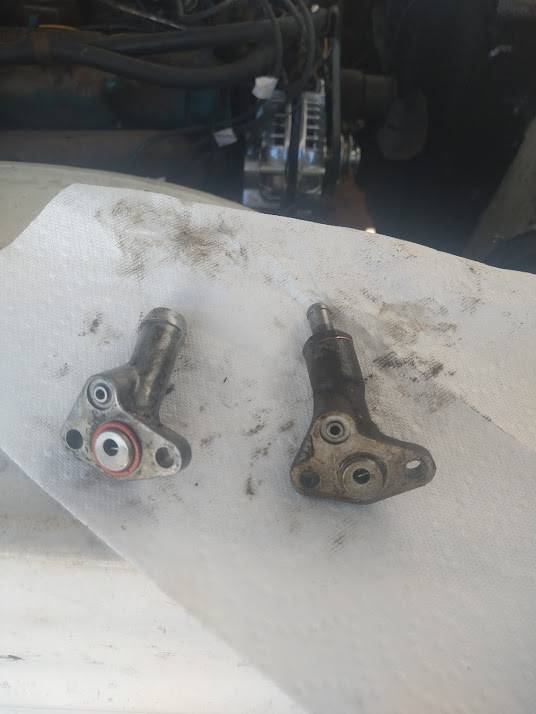 while a same colored, smaller one for the small orifice above remained stuck in place. Both such O-rings on Mathilda's gearbox remained stuck to it, and are of ordinary black rubber. They worked for both gearboxes, so I don't care what color they are. Thus far, not a drop appears to be lost from Gertrude's power steering system this evening, after a 10 mile round trip test run. Note the rim of an inline 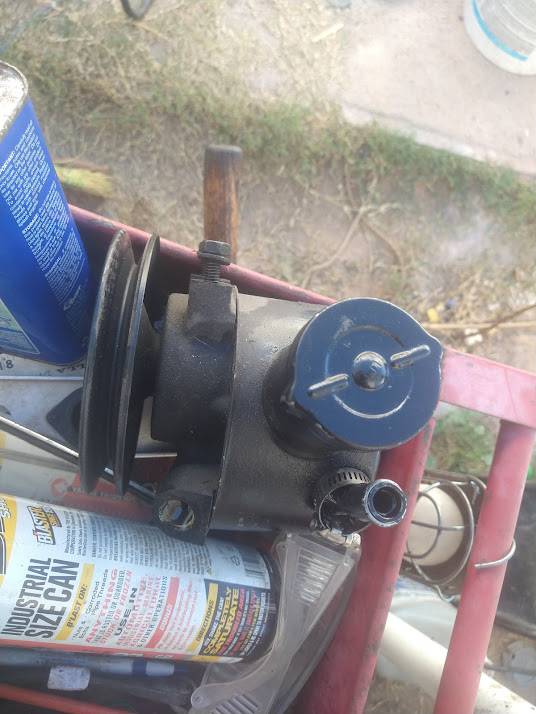 fluid filter screen just showing below the lip of the hose return fitting on the old Imperial pump. I put a second, larger filter just up line from the gearbox, to help insure minimal damage to the pump from any incidental debris. All I found in the small in-pump return filter were a few small bits of rubber from the hose.
You must log in or register to reply here.

Does the position of my power steering gearbox look correct?