I notice that the magic mushrooms are making a new comeback.....now they are good for you. I am not dismissing them, because at my age, some "medication" at night to let me sleep would be welcome.....

Dunno about sleeping, but can help with PTSD, lifelong smoking, under the care of a professional.

Is Medicare paying for this yet? ;]

At least you did not mention 18 yr old Macallan. Stopped for holiday in Blowing Rock NC.....asked for a glass of the 18 yr old....my mistake. The only thing that did not go wrong was he asked if I wanted another. The bill came for about $50 for roughly 2 oz of that elixir....had to dig a little deeper. Oh well, good memories.

Can only imagine the price of a shot of Laphroaig now.

Thx to my guardian angels I survived the effects of said shots on BMW R100GS, no injuries or arrests, definitely some divine intervention at work.
6

I have owned over 50 2 wheelers....only one of your ilk. But, when young, bought my first kick start harley. Out one night, too much in the way of happiness, and a friend wanted to drive my bike. I told him....if you can start it, you can drive it. What I forgot was that it was still warm, and it did start.....to my dismay. Many decades back.

The GS is long gone.

A riding buddy insisted on swapping one night, him on Triumph 650, me on 1960 Matchless Typhoon G80TCS, a 600cc single that had been owned, jumped and left for dead by Evel Knievel back in 1963.

So he gets on it, tries to kick it a couple times, falls over, breaks the mirror...
6

My early days included a friend on a triumph bonne. I was on my first bike, a small honda. Recently, a friend let me ride his nice norton....I think 850. I had had one that was awful much earlier. His was a dream.....smooth and ran great....wish I could afford one like that. But, sounds like you are in another world with these bikes.....nice. The old single were a bear....even with compr release.

The singles could put you in the hospital, break your knee or send you over the bars.

But usually super easy to start if you were sensitive to what is TDC, and the principle of letting the flywheels carry the piston over with a hard kick after releasing compression by pushing the piston over.

Not everybody got it.

Hardly anybody got it, so Honda made it automatic.
6

The early hondas were also kick start, but would start. I would always laugh at the harley guys trying to get things going.....kicking and so on. My first harley was an AMF sporty kicker, that would start, if done right. Not like the early big twins that would not. Fun all around though. Kind of miss the kick start....have a softtail in the garage that kicks at the hit of a button.

My 1st and only Harley - besides Rapidos that don't count - was a '56 Pan, sold my Roadrunner replica and my Ramcharger - to same friend - to buy the Pan, for $7k in 1990's dollars. Had rebuilt motor/clutch and trans, but spray painted, molding done on the frame, chopper seat, etc.

Spent 2 years restoring it, in living room, the things you can do when you come to your senses and realize living alone is a lot easier in every way possible.

It would start pretty easy unless cold, then forget it, the clutch would slip rather than roll the engine, 1200cc...

It was fast and would run away from Softtails with surprising easy, really surprised the softtail guys at lights.

The Harley dealership came to my house with a truck to pick it up for a Xmas show when it was finished, I had it insured for $18k, per the dealership, in 1990's dollars, so basically three times what they're worth now probably.

Eventually I sold it to a buddy that had a '63 Pan ex Shriner bike, way cool red Panhead with suspension but still kick only.

We'd go on rides together before I sold it to him, two pans pulsating and throbbing up hills together, ground pounders.
6

Well, we have likely disobeyed all of the mopar rules on this tangent, so will end with this. Always wanted an older harley, whether flathead, knuckle or pan.....no hotrod seat on the hard frame though. And today, they are worth good money. I have been to Maggie Valley a couple times to the harley museum. Great fun....esp with the hand shift and foot clutch....rode a friends when I was young.....great bike....it was a rat. Having fun last couple days fighting the wire harness in the fury....and this will continue for some time....losing the rest of my hair...just hope I can get it to turn over and have brake lites.
V

just to hijack this back to the original topic...the crimpers from American Autowire showed up and work just fine...havent tried them on the steel fusebox terminals yet as i'm off on another tangent....

Big_John said:
I don't have a good answer for a good crimper, but I found a really good wire stripper. https://a.co/d/fpipbfJ

Here's a pic of the one @Big_John mentioned. Looks like a more automatic/updated of an older spring-loaded style from 15-20 years ago that somewhat resembled this.
I did not find the older version to work that well, as you had to get the wire in the correct-size die for a proper cut - all the thing really did was pull the cut insulation off for you.
But this one looks like it has more functionality, and I would trust @Big_John's endorsement. 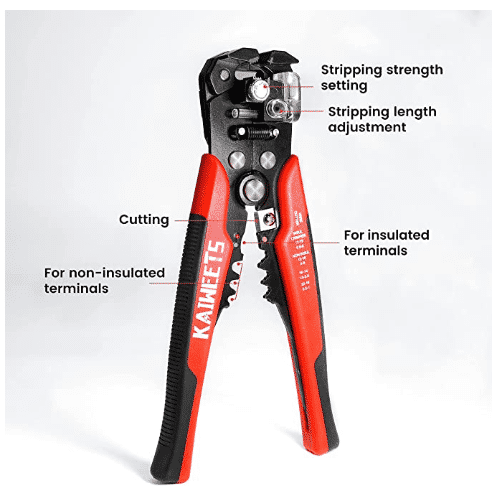 At my latest job where they have an electronics shop and do a lot of hand-assembly, they have these.
I had never seen such a type before, and was amazed at how well it works. They are ~$120, though.
Amazon has some knock-off competitors, and some of them seem to be from reputable names in Germany?
All depends on how much time a guy wants to spend researching, though. 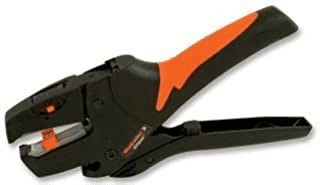 It seems Klein still makes the older type of stripper.
I circled in red the dedicated die cuts for various wire gauges.
Put the wire in too-big die - it shaves the insulation.
Put in too-small - it can cut some conductors.
And for every strip, you must have your hand all the way open.
The Weidmuller I showed is much more ergonomic than this Klein type. 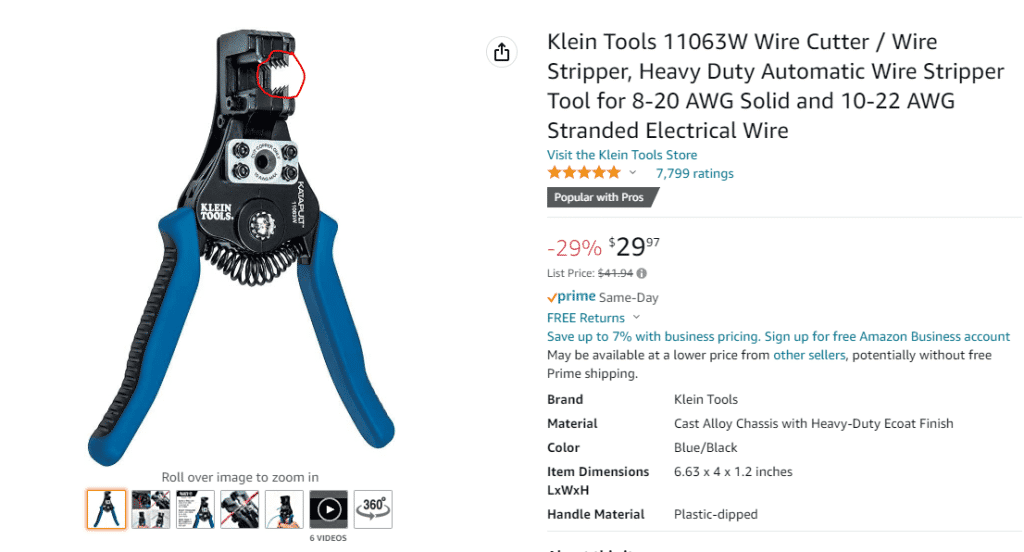 I started using one of these strippers back in the early 60's when my Dad showed me the correct way to wire my HO slot track. They work great if you are paying attention and take the time to fit to the correct slot etc. I've got 3 of these hanging around (one was my Dad's, one came out of my late son's tool box) ).

The stripper I posted is faster and a little easier to use. I happened to watch a video on that one and really had to try it.... The new one is going to be my "go to" now but I'll probably use whatever I can put my hand on.

BTW, stripping a solid wire, like your house wiring, is easier if you squeeze the wire insulation first and crush it with electricians pliers. You can cut the insulation off with a knife if you don't have a stripper handy, but the cheap strippers they sell for doing house wiring work really well then. That was something else my Dad (electrician) taught me. 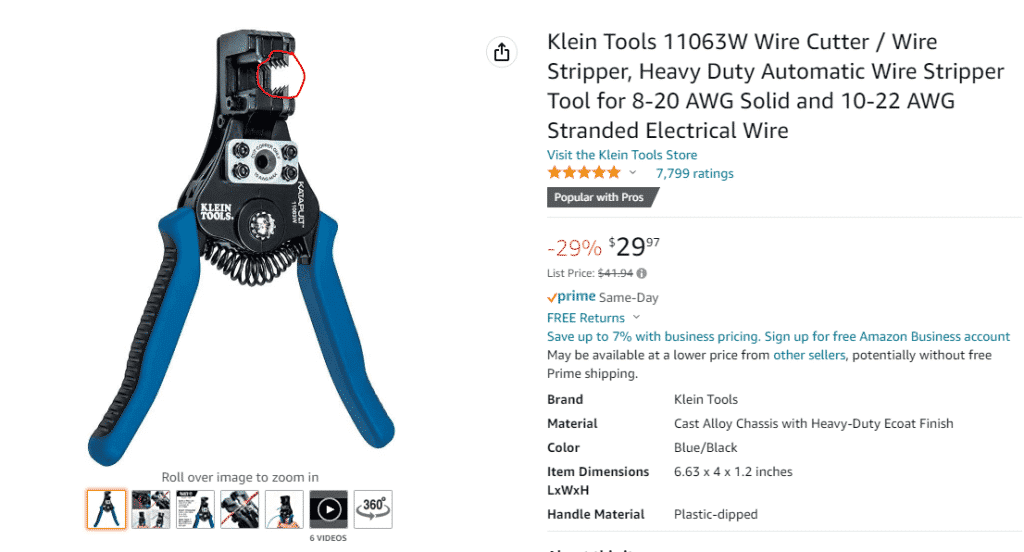 I've got your stripper in an Amazon list, will look for a video when I'm ready to buy. Or might get a Knipex version of that Weidmuller, Knipex seems to be a decent brand.

Good tip on crushing the insulation on solid wire. I have a roll of 12ga stranded THHN I've been using up for the last 10 years and that might help with that tough stuff.
6

The heck with the strippers, I like the pic of the dog.

A little late to the party. But along time ago @commando1 put a link to these on a thread. I don’t have the link anymore but here they are. The brand I got is: Pro’s kit CP-336F. They have w double step to crimp the wire and the insulation for 10-20 gauge wire and terminals. 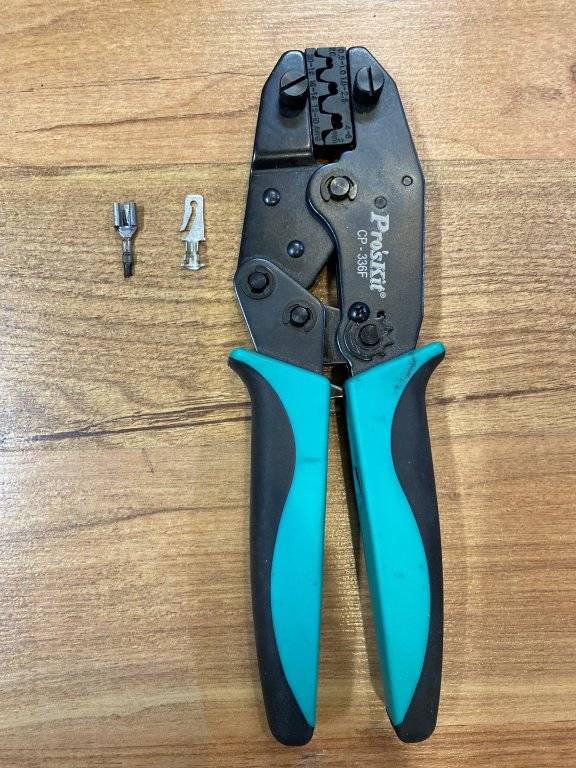 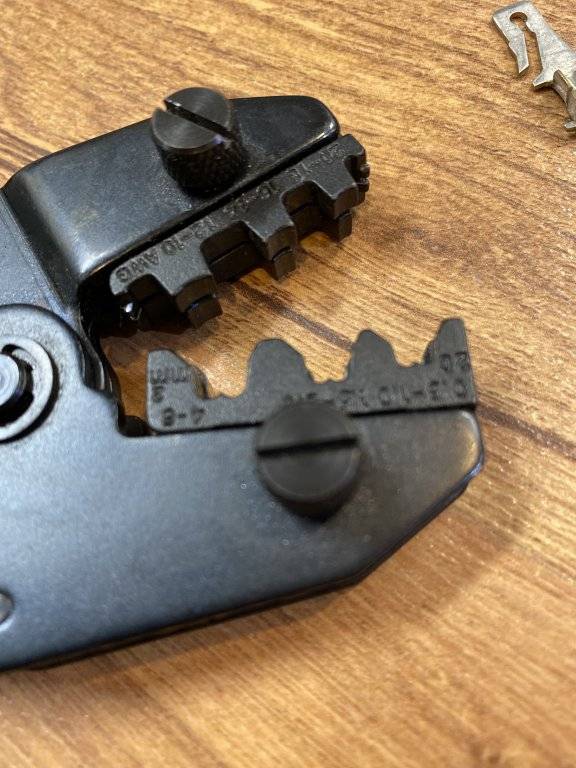 I just did an Amazon search but mine didn’t come up. These look similar and seem to be cheaper. Mine were around $30. Not sure of the quality.

I have re-wired a few things and have the tools to prove it. (Missing my coax cutter and crimper). 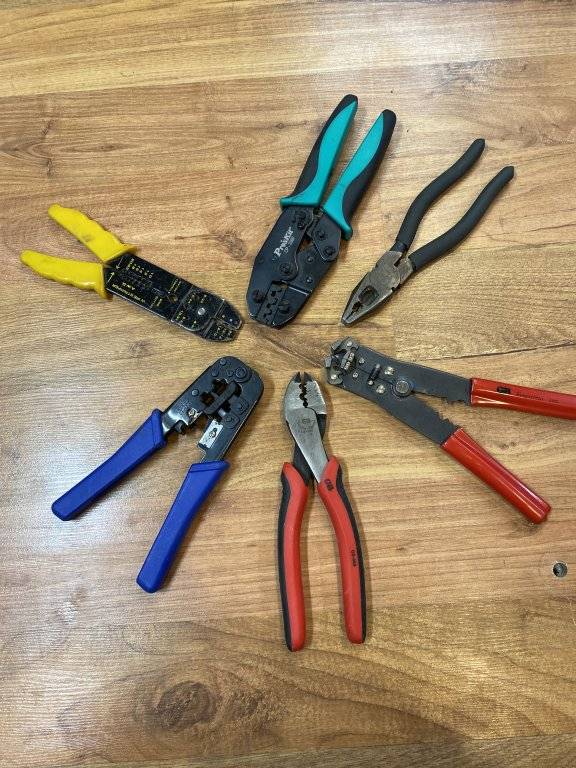 fury fan said:
Here's a pic of the one @Big_John mentioned. 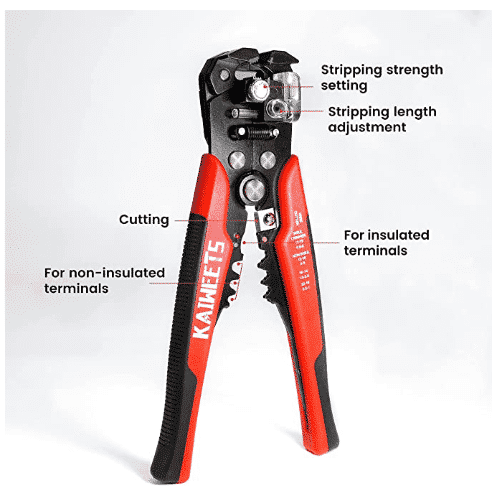 I have one that looks just like this one and I can say it's an absolute PAIN to work with. While it crimps the terminals okay the big problem is that you're crimping between the handles and the pivot point. If you're crimping in any sort of tight place of haven't got at least a foot of wire sticking out it's going to be very difficult. Also, the stripper does look nice but is not built to last. Although that might just be on my cheap one so ymmv.
You must log in or register to reply here.

The toughest wire pull I've encountered in my life! A Saginaw steering column and the Shee-Mar 107 wiring harness.