Anyone interested in bagging their 70 C body stub frame without removing the torsion bars or the whole stock front end?

I was wondering if the T-bar was still in there, an early statement initially made me think it had been removed. So yes, all of the concerns about the LCA walking off the pin are solved if there's a T-bar in there.

So the T-bar adjusters are then loosened all the way, dropping the car to the minimum, and the airbag controls the ride height and vehicle weight loads. If so, the airbag is supporting most of the vehicle load downward thru the UCA. The non-installed bolts of the airbag's bottom plate weren't part of my concern, the question is on the UCA itself, whether it (and the UCA bushings) can handle that extra load long-term. The angle thru the balljoint has always been there, but it now has increased load thru it also, extra force is transferring thru its body to its tapered pin. Yes, the UCAs are canted as original - that creates anti-dive properties for vehicle braking.

My earlier double-shear comment can be ignored. I was initially thinking that the 2 UCA brackets on the frame were L-shaped, causing single-shear on the bolt. I found a good picture and saw they are U-shaped, which gives double shear. (the RH arrow below would represent an ear of the UCA and the LH arrows are the frame brackets; bottom sketch is double shear that represents the U-shaped brackets). It was silly of me to think the engineers would do single-shear when double-shear is significantly stronger, and very inexpensive to accomplish in this case. Nothing has changed in this, except that the airbag installation has increased the reaction forces in the bushings and brackets. 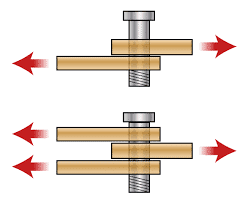 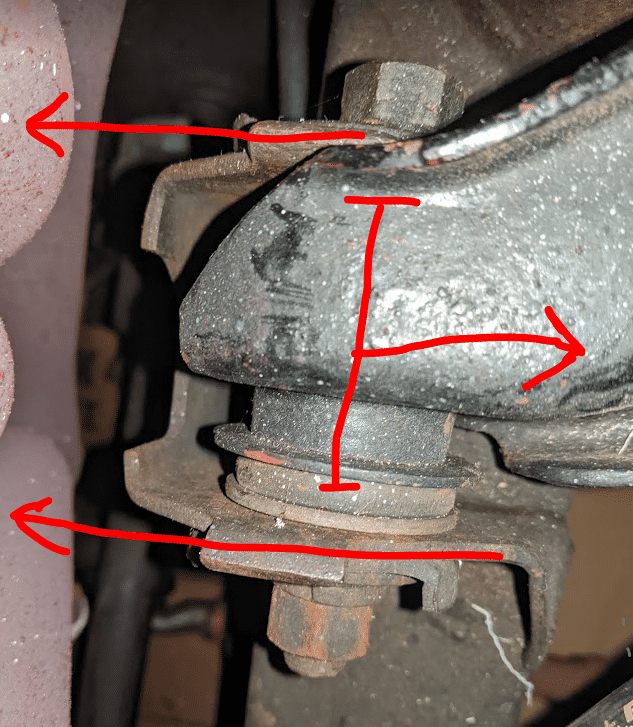 Here's a crude free-body diagram of original factory reaction forces (some of them), red arrow represents the ground holding the car via the wheel and bottom half of hte spindle, the green arrow is a downward force applied by the LCA via torque reaction from the torsion bar. Magenta shows the spindle is merely held vertically (at the appropriate caster/camber) at the top via the UCA and BJ. 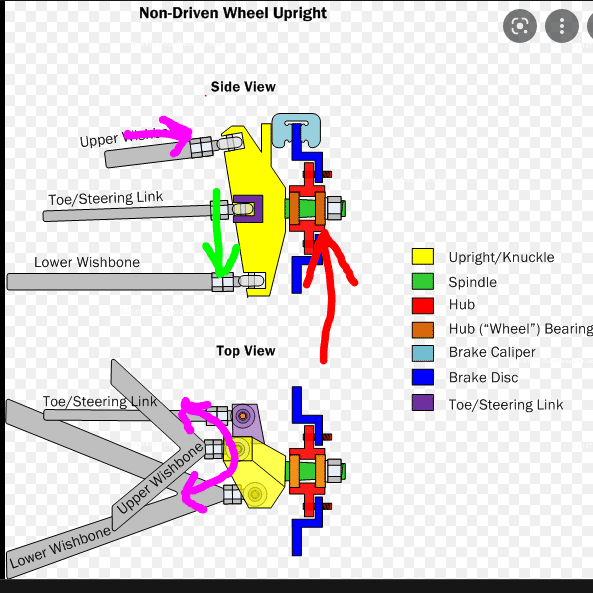 Here's the system with the airbags at pressure. The UCA must hold the spindle upright as before, but now has the vertical green arrow load, which makes increased loads at the UCA bushings/brackets on the frame (blue arrows). This is based on airbag having required pressure and therefore the T-bar making minimal contribution. 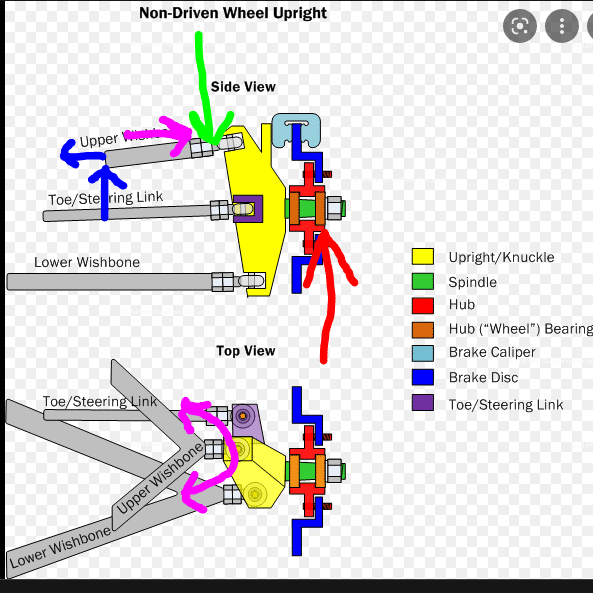 FWIW - I'm not sure what you mean by this particular car, and being a convertible, is different. All C-bodies have a bolt in stubframe, whether convertible or not, and all have a bolt-in crossmember tying across the transmission tunnel. Some have a rubber-isolated, bolt-in crossmember that anchors the rear end of the T-bars, others have them anchored solidly in the stubframe itself. Later Cs have the stubframe mounted to the body by isolators (and are longer), earlier ones don't. Other than that, all C-bodies are similar concept, they are certainly different from A-B-E bodies which are a complete unibody. A C-body is only unibody from the firewall rearward.

But overall -
I don't know if this installation is good or bad, and I'm not trying to make anybody be right/wrong (although I do debate things that aren't clear-cut).
We don't have any equations to use, nor the numbers to plug into them, to do any engineering calculations (and certainly can't do any FEA!).
I just see that the overall system is now different, the loadings on parts are different, and wanted to describe what I see.
If this had used a whole Mustang II/Fatman retrofit I wouldn't have given it any further thought.

And I applaud you for your creativity and your courage to do such mods - especially to another guy's car!
A

This should clear up what im talking about with the slight difference in frames. Ive seen an actual hand drawn picture of both of the frames that were used from 69-71 but I cant remember where I saw it. 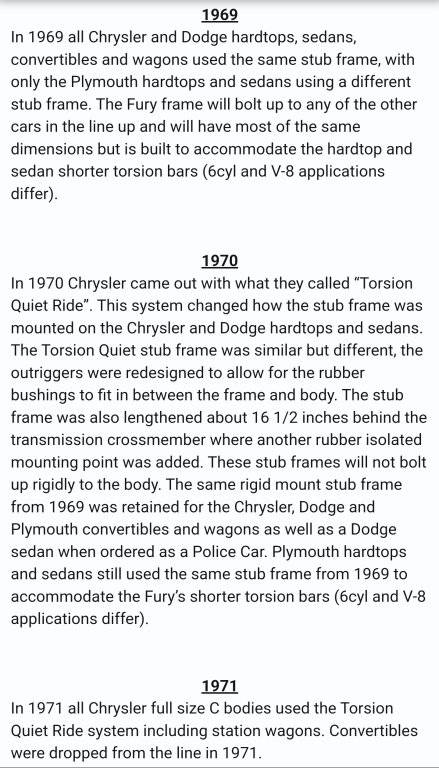 Thank you for the good info though. I didnt anticipate this to come together with zero issues, short term or otherwise, but im happy that I've kept the possibility of problems in mind while coming up with this. Basically, I just made sure that the direction this took allowed for ability to do future maintenance on the car and the mods being done arent permanently blocking any thing from being changed in the future.

And i think you might have thought i was removing the torsion bars because I mentioned that the leaf srpings in the rear are gone now in favor of bags and a 4 link setup back there.
You must log in or register to reply here.